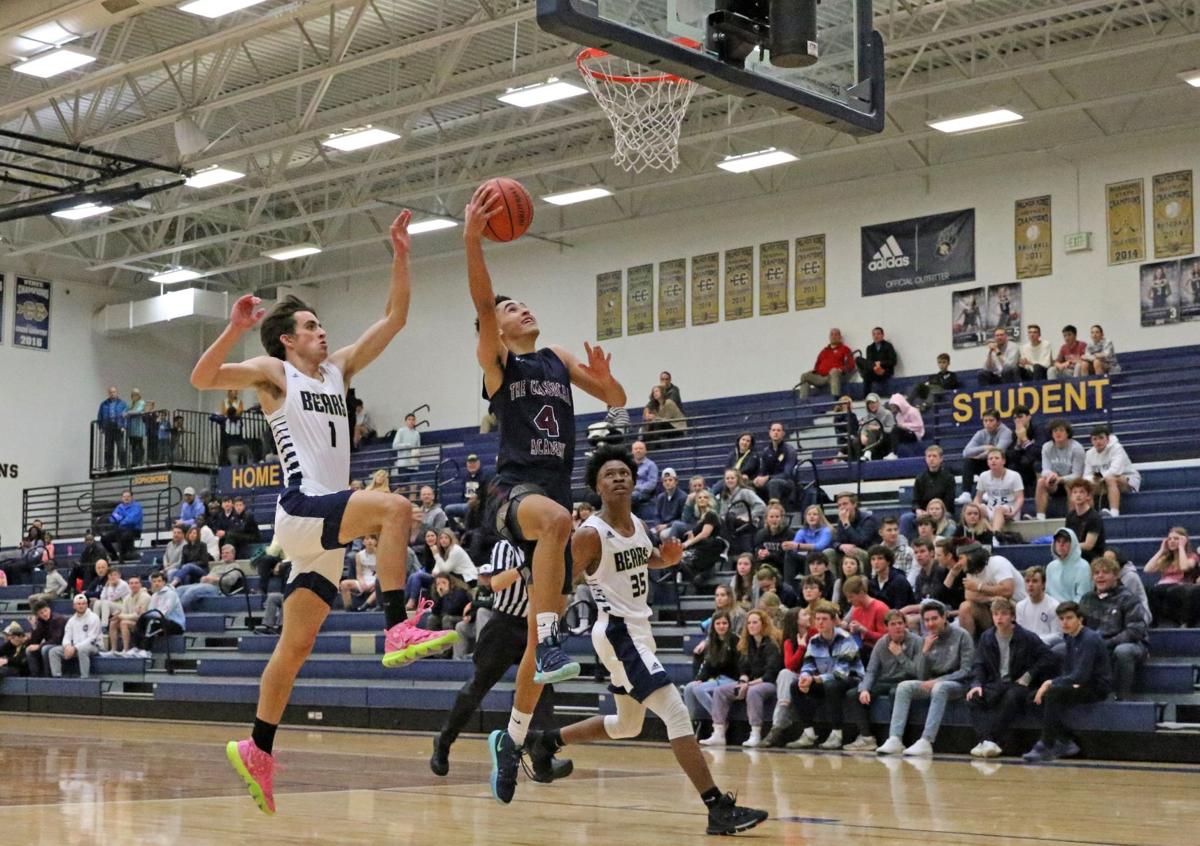 TCA senior guard Micah Lamberth goes up for a layup in the Titans’ game against Palmer Ridge on Jan. 7. Contesting his shot is Palmer Ridge senior Wes McEvoy (No. 1). 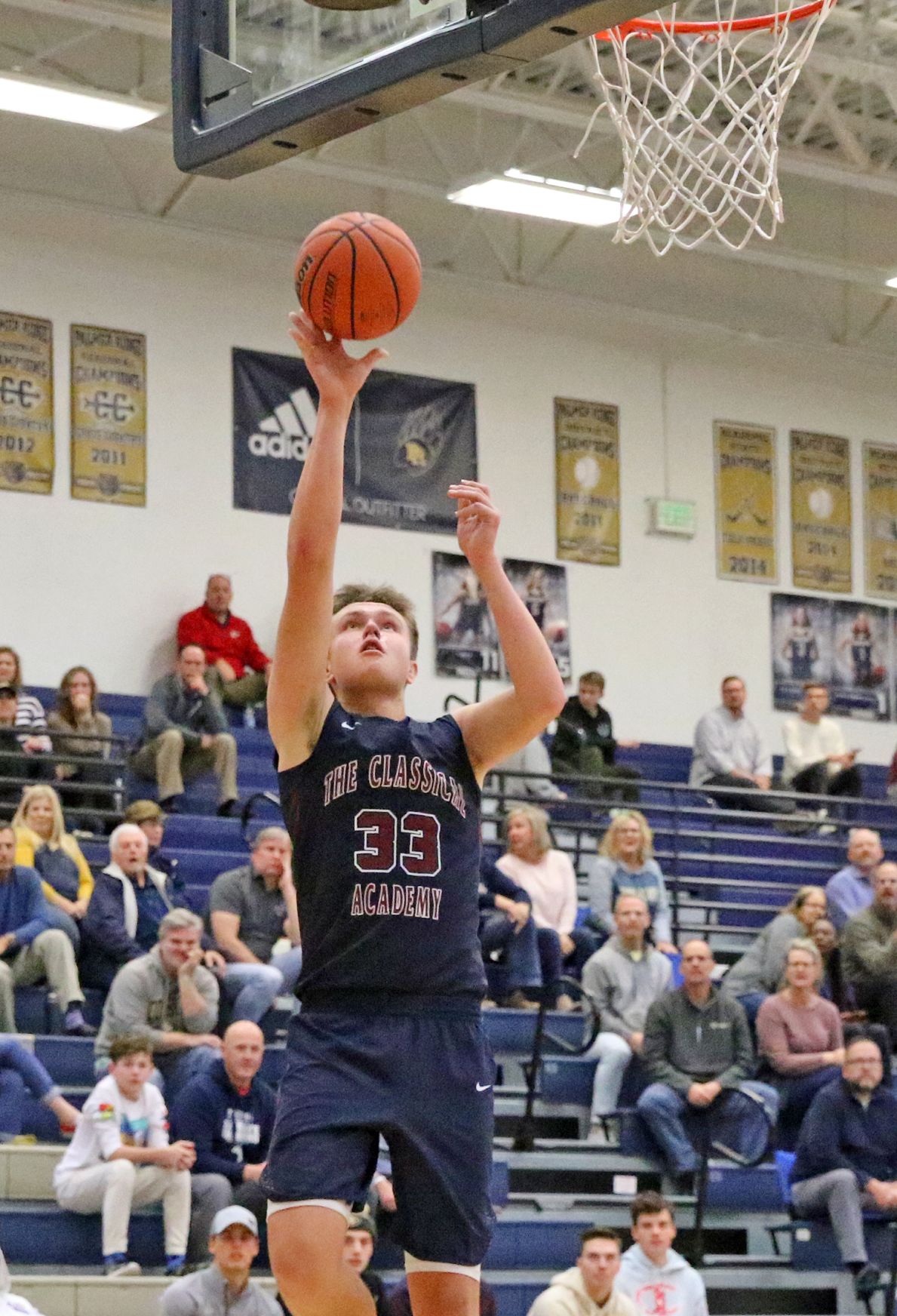 TCA senior Tyler Trogstad goes up for two of his career-high 21 points against Palmer Ridge on Jan. 7. He also pulled down a career-high 19 rebounds.

TCA senior guard Micah Lamberth goes up for a layup in the Titans’ game against Palmer Ridge on Jan. 7. Contesting his shot is Palmer Ridge senior Wes McEvoy (No. 1).

TCA senior Tyler Trogstad goes up for two of his career-high 21 points against Palmer Ridge on Jan. 7. He also pulled down a career-high 19 rebounds.

After defeating Palmer Ridge in a non-league boys’ basketball game on Jan. 7, The Classical Academy shot to No. 5 in the Class 4A RPI standings. Two days later the Titans vaulted to No. 3 after a victory over Canon City.

“We gelled over this past summer and that’s when we really started to get going,” said TCA senior 6-foot-4 guard Micah Lamberth after the Palmer Ridge game. “We brought that confidence over to this season.”

Lamberth, a three-year starter, leads the Titans in scoring this season with 14.8 points per game. He is also averaging 4.7 rebounds, 3.5 steals and 3.3 assists.

Lamberth is a legitimate college prospect. Sitting in the stands taking notes on him was Colorado College coach Andy Partee.

“I went to one of their open gyms and I really liked their community,” Lamberth said. “Their whole team was very welcoming.”

TCA senior Tyler Trogstad, a 6-7 center who takes up a lot of room on the paint, had career-highs in points (21) and rebounds (19) against Palmer Ridge.

“When we have bench communication that’s when we’re at our best,” Trogstad said.

The Titans are hoping to secure a first-round bye (the top 16) when the playoffs get underway next month. Last year, TCA was the No. 16 seed and lost to No. 17 Greeley Central in the first round.

TCA senior Kade Walker is expected back this week after missing a couple of games with a knee injury.

“Most of us have played together since fourth grade,” said Walker, a three-year starter who is averaging 11 points and 6.2 rebounds this winter. “We have great chemistry. We all bond. It high energy.”

The Titans are expected to battle for the Metro League crown with Harrison (6-1 as of Jan. 8). Last season, Harrison won both games against TCA by three and two points, respectively.

Palmer Ridge has faced adversity all season. The Bears have had numerous injuries and health issues. Their game with TCA was originally scheduled to be played before Christmas, but was postponed until Jan. 7 because Bears’ coach Nick Mayer could not field a full squad.

“Our guys are fighting,” said Mayer, a Lewis-Palmer alum and the only head coach in the 13-year history of Palmer Ridge. “Tonight was the first time we’ve had nine of our 10 guys back, so we’re getting there.”

Palmer Ridge found itself down to TCA 37-13 with just over five minutes remaining in the third quarter. Mayer called a timeout but he did little talking.

“Grant Renwick, our senior captain, is out for the year with an injury and I told him to lead the huddle and he did,” Mayer said. “I think he got ‘em motivated.”

The Bears mounted a furious comeback to cut the score to 44-41 with 2:57 remaining in the fourth. Among those knocking down long 3-pointers was senior guard Tyler Calhoun, whose father, Troy — the Air Force Academy football coach — was in the stands giving his approval.

The Bears later trailed 51-47 but could draw no closer.

“I feel like this team has gone through so much we can only go up from here,” said Palmer Ridge junior guard Gabe Henson, who leads the team in scoring with 13.4 points per game. “With all the injuries and sickness we had it’s a great motivation for the rest of the seasons. Hopefully, we’re getting healthy and will have a full team going forward.”

Palmer Ridge senior guard Trey Jones knocked down three of his six 3-point attempts against TCA and is among the team leaders in scoring with 10.0 points per game.

“We’re still hurting and we’re playing through it, but once we get healthy I think we have a good chance to play well and see what happens,” said Jones, a multiple state qualifier in golf. “We’re just trying to go 1-0 every game, Just win that game, have two or three days of practice, and keep focusing on playing our best.”

The Bears have two big Pikes Peak Athletic Conference games coming up at Cheyenne Mountain on Jan. 17 and home against crosstown rival Lewis-Palmer on Jan. 22.