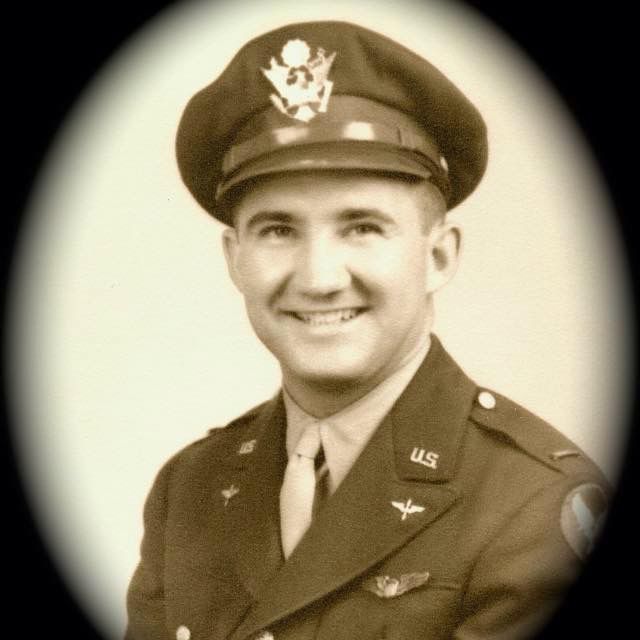 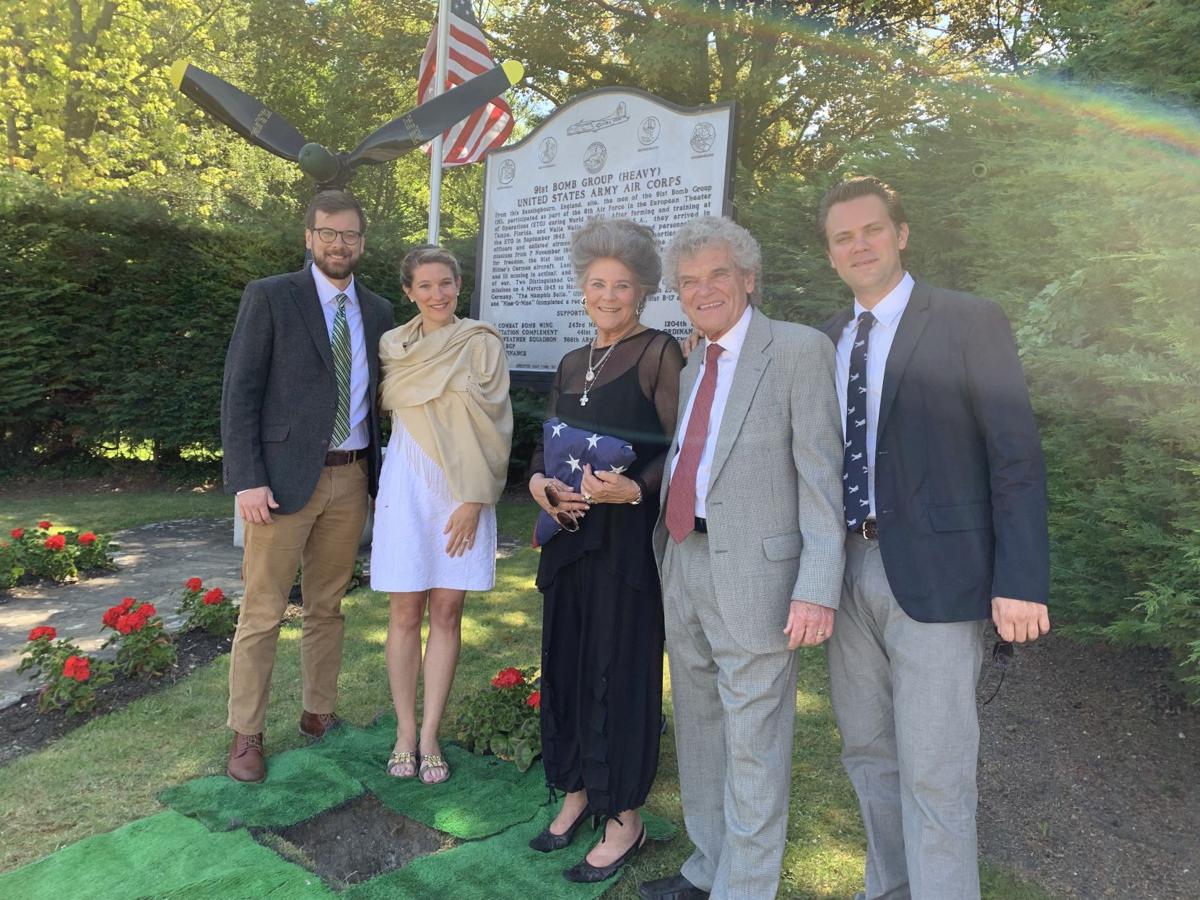 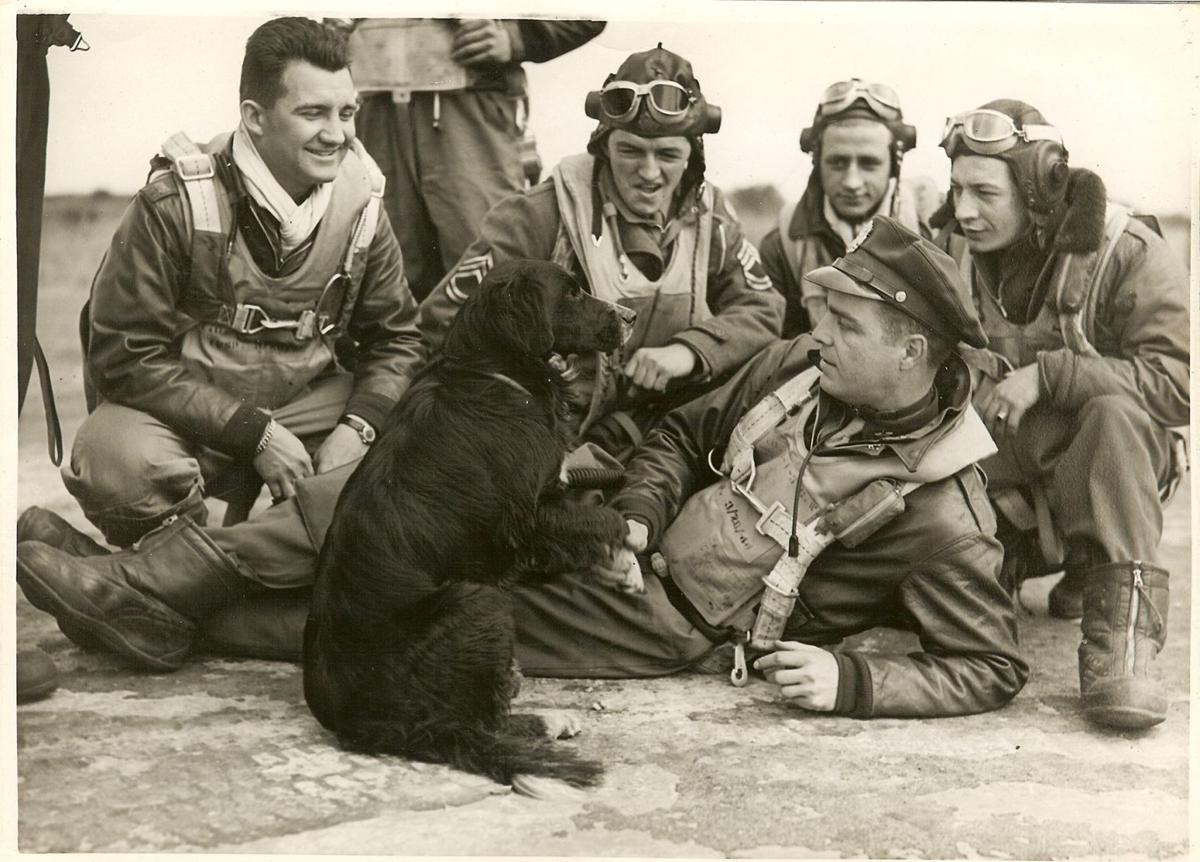 Members of the Peacemaker 91st Bomb Group with a canine friend. James Duane Fletcher is at left.

Members of the Peacemaker 91st Bomb Group with a canine friend. James Duane Fletcher is at left.

Editor’s note: In honor of Veterans Day, we are publishing this column by local resident Justin Hermes about his grandfather, James Dean Fletcher, a Colorado Springs resident and Army Air Corps veteran who served in three wars.

Our family recently took a trip to commemorate the life of my grandfather, James Duane Fletcher. A resident of Spring Lake, in southwest Colorado Springs, he was a member of the Greatest Generation, and veteran of World War II, the Vietnam War, and the Korean War.

Our visit coincided with the 70th anniversary of D-day, the Fourth of July, and what would have been my grandfather’s 100th birthday. My grandfather loved England, especially the Cambridge area, where he had been stationed from 1954 to 1958, post-World War II. He served in WWII from August-September 1944. During his time there, he flew 32 missions as the copilot of a B17 bomber with the 91st Bomb Group. He passed away on July 27, 2012 and we were able to just this year take a portion of his remains back to Bassingbourn, the base where he was stationed during the war.

He never talked much about his service, but my brother collected stories about his missions over the years, and this trip offered us the opportunity to see the places he talked about and retrace his early morning treks out to the airfield from his living quarters on the base at Bassingbourn.

“Jim” was scheduled to fly his first mission over Berlin but was grounded with a sinus infection. To his great sadness, his crew never returned as they were shot down over Berlin. Jim’s first experience of the war was not in the air but rather packing his crew’s belonging and writing letters back home to their families. It was not long after that he was reassigned to a new crew and flew his first mission on March 28 into Rheims, France. He recalled coming into an immense amount of flack and burying his head into his lap as they approached the enemy groundfire. Jim was quickly brought to attention with his pilot yelling for him to keep the plane stable as they approached the bombing target.

Between missions, Jim and his fellow airmen enjoyed playing softball, tennis and getting drinks in town at Hoops, a local pub that is still open today. Jim shared a house with fellow Colorado natives Sam Newton and Bert Stiles. Both gentlemen graduated from Colorado College and flew B-17’s as well. Stiles published many books about his wartime service, including “Serenade to the Big Bird.” He was killed in action flying P-51s after his tour on the B-17s. Newton became a successful businessman in Denver after the war. Jim frequently got together with Newton after the war and other veterans during reunions around the U.S., and more importantly back at Bassingbourn.

These war heroes would walk though their old barracks, tour the flight tower and mess hall, and check out the old hangers. The history is very much alive in the town of Bassingbourn and the villagers have so much respect and love for the Americans who helped fight the Nazi regime. Over the years the village of Bassingbourn developed an organization called Friends of the 8th Air Force. This group got busy writing the history and honoring the lives of the American airmen that filled their childhood memories. These men and women still catalog the history of the 8th Air Force, stay in touch with the veterans and their families, and maintain a memorial on the old airbase that is now an active training facility for the Royal Military.

The memorial is simple and yet striking with the large B17 propeller, towering American flag, and bright red flowers planted along the base. This is where David Crowe, an active member of the Friends of the 8th Air Force and a good friend of my late grandfather, arranged for us to intern some of his remains. My mother had been saving a portion since my grandfather died in 2012, in the hopes that we could one day spread them at the airfield.

When Crowe heard of my grandfather’s passing, he flew a new American flag over the memorial on the base as a way of paying his respects, since he was unable to attend the funeral. When my mother informed Crowe of our visit and our wishes for my grandfather’s remains, he took the flag down (having flown it for the past seven years) and presented it to my mother at a ceremony he arranged with the base commander and a local priest. The devotion that Crowe and his friends showed my grandfather on a Fourth of July that we will always remember, was inspiring and touched my family deeply. It reflected my grandfather’s devotion to his country and was a reminder of the ultimate sacrifice made by so many. It was also a moving example of the bond forged between our countries during a time of grave fear and loss, that birthed a hope and courage that ultimately won the war.

Crowe would share a very impactful story during the ceremony that none of us had heard before. Jim flew on the raid to Leipzig on July 20, 1944, and his plane was shot up so badly they had to leave the formation and fight to get back to the coast of England. They dropped altitude and threw everything out of the aircraft they could to drop weight. Luckily a group of P-51s came to escort them back to Bassingbourn. The plane’s right wing had a giant hole in it and other parts, including the tail, were shot up badly. Nonetheless, they were able to land safely back at Bassingbourn and the ground crew started on the repairs.

About a week later, after the plane had been repaired, it was ready for a test flight to make sure everything was operating correctly. Typically the pilot, copilot and navigator would take the plane up and go through some tests to make sure all is well. Once again Jim ended up back in the hospital with a bout of the flu and could not conduct the check ride. Instead, another pilot stepped in for him and his copilot and navigator went to make sure the Peacemaker was ready for flight. Unfortunately, the check flight did not go as planned and the Peacemaker crashed in the small nearby village. All crew members died in the crash, along with several civilians. Crowe recalled how this news deeply impacted my grandfather. To have cheated death twice is something that makes one reflect.

One of the last times Jim was at Bassingbourn he gave a speech to the Friends of the 8th and other veterans. At the beginning of his speech he stated that every time he came through the gates of Bassingbourn he felt as if he was home. My grandfather lived an incredible life and he, like many others, chose to serve his country after hearing about the news of Pearl Harbor being attacked. One must ask what type of world we would be living in if we didn’t have these brave men and women who fought for our freedom.

We have some wonderful memories from our trip, but I will never forget the picture of a British man moved to tears while paying his final respects to an American airman he loved and admired.