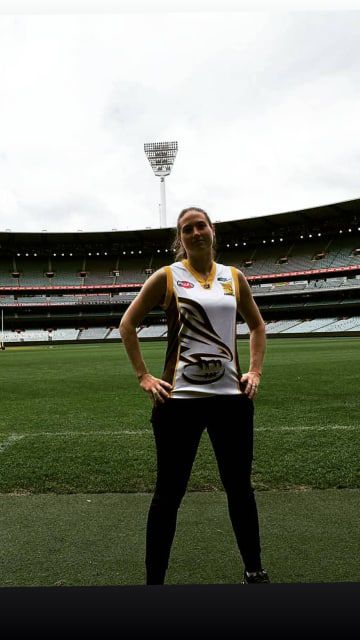 Dani (Hering) Marshall, a 2009 graduate of The Classical Academy, recently returned from Australia, where she tried out for several women’s’ Australian Rules Football League teams. 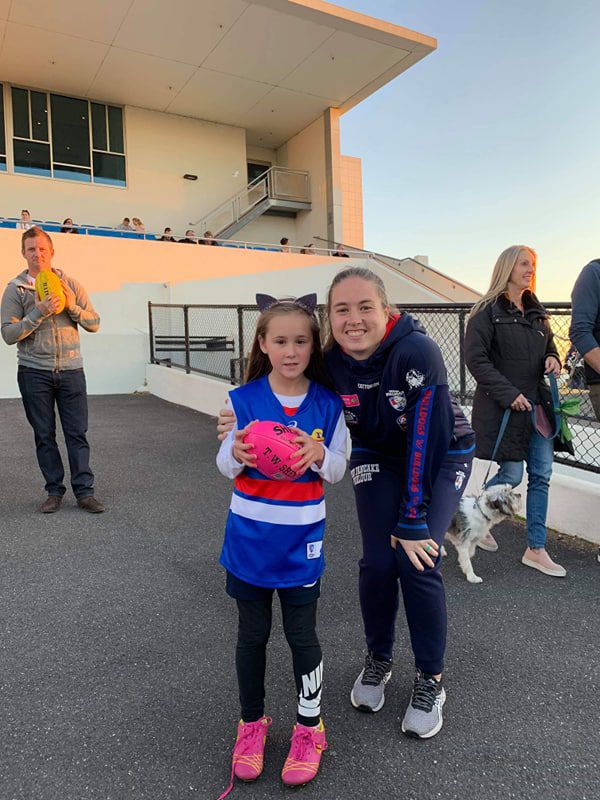 Dani (Hering) Marshall, a graduate of The Classical Academy, poses with a young fan during her recent trip to Australia.

Dani (Hering) Marshall, a 2009 graduate of The Classical Academy, recently returned from Australia, where she tried out for several women’s’ Australian Rules Football League teams.

Dani (Hering) Marshall, a graduate of The Classical Academy, poses with a young fan during her recent trip to Australia.

Danielle “Dani” (Hering) Marshall recently returned from a walkabout to remember in the land down under.

The 2009 graduate of The Classical Academy spent six weeks in Australia displaying her talents in the universally appealing sport of Australian Rules Football. It looks like she might even land a professional “footy” contract with a women’s team in the Victorian Football League.

“I always wanted to play American football, but as a girl, that wasn’t really a thing that you did,” Marshall said. “I always had really good hands. To have a sport that meshes all my soccer skills with the kicking, and also being able to high fly and grab balls out of the air with my hands was just a great combination of my skills.”

Marshall, 27, was based in Melbourne and had tryouts in April and May with several minor league teams in the Essendon District Football League that feeds into the VFL. She said she is in contract negotiations with at least one VFL team.

According to Marshall’s agent, if she signs she would become the first American woman to play professionally for an Aussie Rules team.

The 5-foot-9 Marshall is an aggressive player and thrives on defense. Her soccer skills make her a great marker.

“If a ball is in the air, no one can take it away from her,” said Marshall’s mother, Marianne Hering, a North Gate resident.

Marshall caused a bit of a media storm in Melbourne. She and fellow American Sara Rohner-Edwards were on the cover of the Melbourne-based Herald Sun newspaper. The two were also interviewed by radio and other news outlets.

Marshall, who resides in Mesa, Ariz., with her husband, Ryan, is no stranger to Aussie Rules Football. Two years ago, she began playing with the Arizona Hawks of the United States Australian Football League. She played a season of rugby prior to joining the USAFL.

“I always wanted to play a sport at a really high level, and the AFLW was always in the back of mind,” she said. “I kind of got kick-started with playing a game in (Los Angeles) with Sara. The coach she had was from Australia, and he kind of planted the seed that we should go over.”

“I’m usually the one trying to do the beating up so I don’t get beat up,” she said.

Before she was one of the top American USAFL players, Marshall was a high school and college soccer star. After a stellar career at TCA (she also lettered in basketball and cross-country), she earned a soccer scholarship to Colorado School of Mines.

Marshall shined in her four years as a starter at Mines, earning numerous Rocky Mountain Athletic Conference awards, as well as all-region accolades.

In 2014, she married Ryan, a graduate of Colorado Springs Christian School, and the two eventually settled in Mesa. Ryan works for Honeywell, and Dani owns a laser-engraving business.

Marshall was in Denver last weekend playing a USAFL game. If she signs a contract with a VFL team, she likely will head back to Australia in mid-July.

“God has opened a lot of doors for me, and he’s given me a big platform,” Dani said. “I will see where this takes me.”