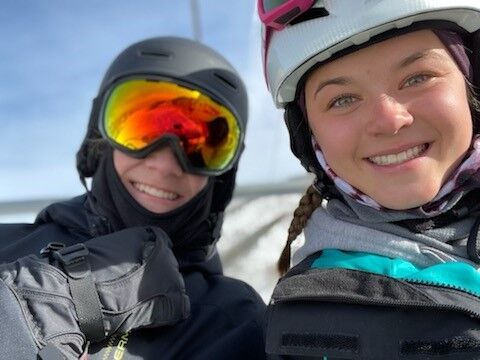 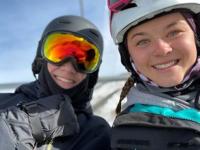 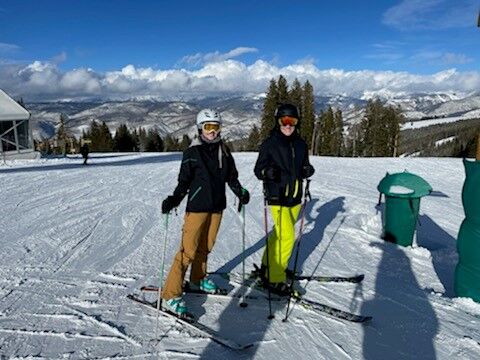 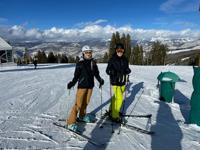 The class assignment posed a rather broad, simple question: “How do we use math in real life?”

“When I am skiing,” she thought, “I constantly calculate my speed and the vertical feet I ski throughout the day.”

While most consider even 30,000 vertical feet an aggressive day on the slopes, their initial goal was 70,000.

Anderson was inspired by her grandparents, three of whom survived cancer, to turn her class assignment into a fundraiser for childhood cancer research. She was also encouraged by billionaire Jared Isaacman — whose interview with Space Force Association in March told her that “when you have an opportunity to do something special in this world, you have a responsibility to make it greater than yourself.”

Her effort was noticed by dozen of donors through her GoFundMe page. But it wasn’t until she was on the chairlift with her skiing partner that she realized the true size of her audience.

Anderson and Gonzalez watched a personal video by Lindsey Vonn, the Olympic gold medal-winning skier who learned through a newspaper reporter about her class-project-turned-fundraiser.

Thanks @lindseyvonn for supporting My daughter, Kayla, in her quest to ski 70k vertical feet to raise cancer for @StJude! We showed her this video after she broke 70k and she kept going!! https://t.co/kLNow7nLrW pic.twitter.com/vKL76TqcpI

“Hey, Kayla,” Vonn said. “I heard that you were gonna ski 70K in one day. That’s nuts. But I want to wish you all the best of luck and I know you’re going to crush it. And the fact that you’re raising money for St. Jude’s is amazing, so be proud of yourself no matter what. Good luck. I’ll be cheering for you, and I hope to see you soon.”

The two Pine Creek juniors were stoked by this video despite the fact that their legs and backs were hurting after all that exercise. They started at 8:30 a.m. that day. And by 2:22 p.m., they’d surpassed 70,000 feet. But the special message by Vonn only motivated them even more.

The most Anderson and Gonzalez had skied in one day before then was under 50,000 feet.

“I think what I remember most about it was my legs hurting,” said Gonzalez, who joined Anderson as a friend and “safety observer,” “but that’s so irrelevant. The biggest thing is the competition within us to get to the highest point.”

By Anderson’s calculation, one full trip up and down the mountain takes about 10 minutes and covers 2,100 vertical feet. She said those numbers were conservative and gave them “some leeway” to do more.

So they kept going and reached more than 90,000 feet. They accomplished this feat despite facing about five inches of fresh snowfall from the night before, temperatures in the 20s and a frigid windchill factor.

In the end, it was more than a class assignment.

“I absolutely want to earn an ‘A’ on my math project,” Anderson wrote on her GoFundMe Page. “I also want to be among the first females to ski a documented 70K vertical feet. But more importantly, I also want to make a difference.”