Hikers of the Manitou Incline can now shorten their otherwise grueling trip thanks to two new trails.

The city of Colorado Springs on Thursday announced the opening of the paths, descending the northern side of the mountain-spanning railroad ties.

One is mapped as meeting tie No. 395, stretching a short distance to the Ute Pass Regional Trail, which at that point returns to the Incline's base in less than a quarter-mile. 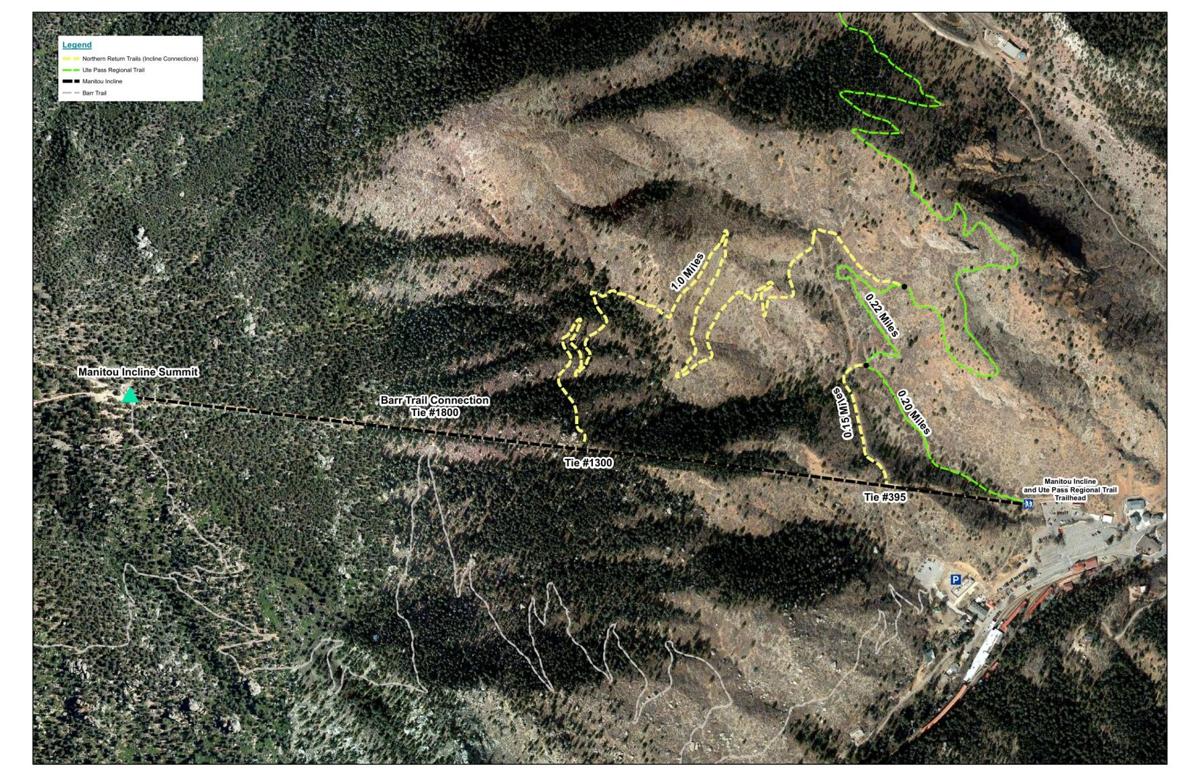 The second return trail is from tie No. 1,300, about 500 steps below the current "bailout" point with Barr Trail, which switchbacks down the opposite, southern side of the mountain. The new return route also via the Ute trail has been logged at about 1 1/2 miles.

Colorado Springs parks director Karen Palus called the trails "much-anticipated" in a city press release. They were envisioned more than a decade ago when land managers and advocates began meeting to plot the future of the Incline, which was previously privately-owned and a cult workout for trespassing athletes. Since the former railway opened to the public in 2013, it has drawn an estimated 300,000 people a year.

NorthernInclineTrail from City of Colorado Springs on Vimeo.

In the press release, Palus counted the new trails' benefits as three-pronged: providing relief for anyone who underestimated the Incline's difficulty; relief for first responders; and relief, too, for Barr Trail, which has been battered by Incline descenders and people on their way up and down Pikes Peak.

"The other advantage is there aren't as many roots and rocks," he said. "It's a really nice tread."

But the bailouts also serve as new entry points to the Incline — potentially problematic with the current arrangement to check Incline hikers with reservations at the foot of the mountain.

The August agreement was made by land-owning city of Colorado Springs and leaders of Manitou Springs, who under a COVID-19 emergency declaration closed the Incline and have long sought to control crowds through the narrow, residential Ruxton Avenue corridor.

The closure had been in place for five months before Manitou officials agreed to the online reservation system managed by the neighboring metro. Colorado Springs is also paying for daily staff at the Incline's base.

City spokeswoman Vanessa Zink told The Gazette the expectation is for people to still come with reservations "whether you start at the the base or not. For Incline users, we are encouraging downhill use of the new return trails."

Said Beagle: "I'm going to trust (the cities) are going to work all of that information out. Today I just want to celebrate. We've all been talking about this whole closure thing for so long, and I'm just happy to be here to celebrate."

Beagle said talks have been ongoing with the U.S. Forest Service regarding a another alternate to Barr Trail at the top of the Incline. That trail would cross that agency's land — a project expected to require a lengthy, federal review.

"Once those I's are dotted and T's crossed, then we could hopefully put out a request for bid," Beagle said. "If it falls within our wherewithal, Incline Friends will probably foot the bill for that as well."

What will cold mean for fall foliage in Pikes Peak region and beyond?

As devoted leaf peepers of the Pikes Peak region were dreaming of gold Tuesday, they woke up instead to white.