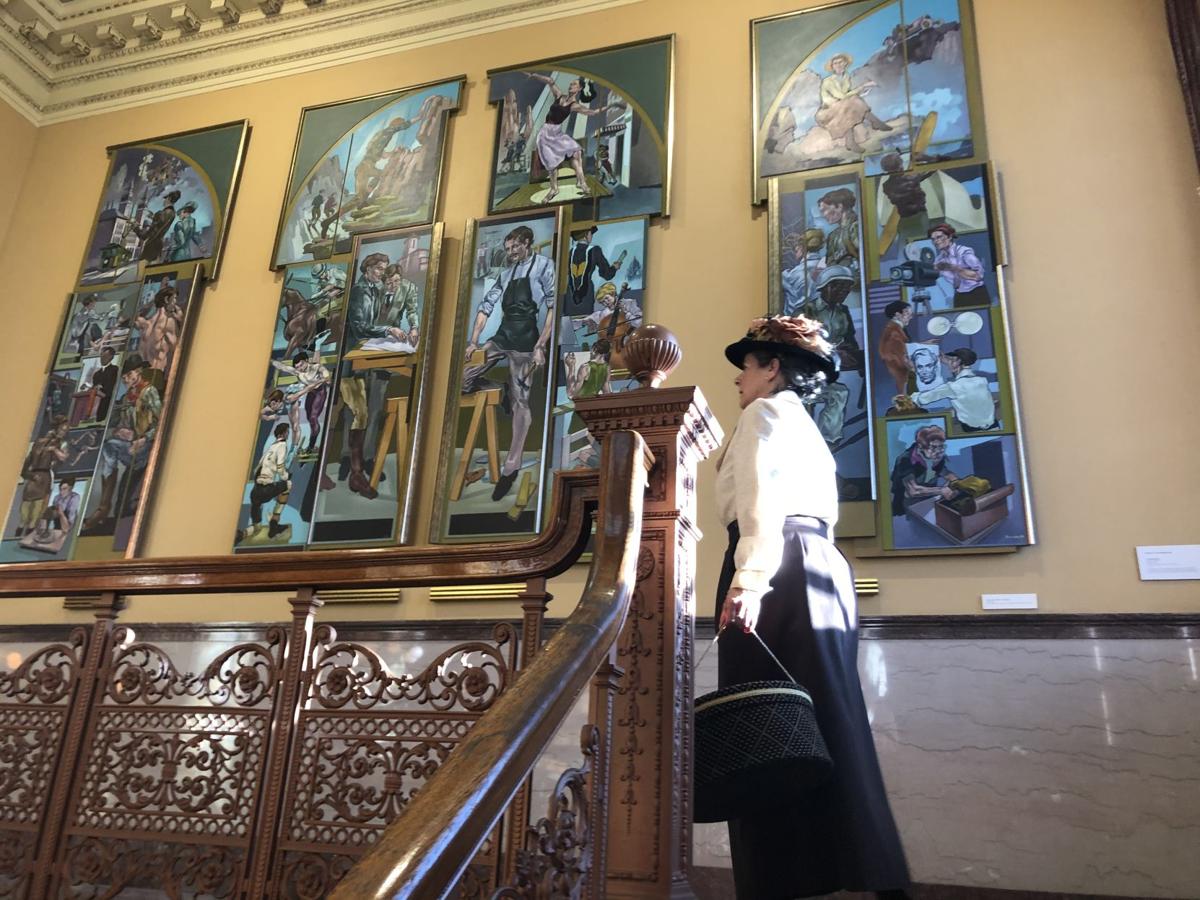 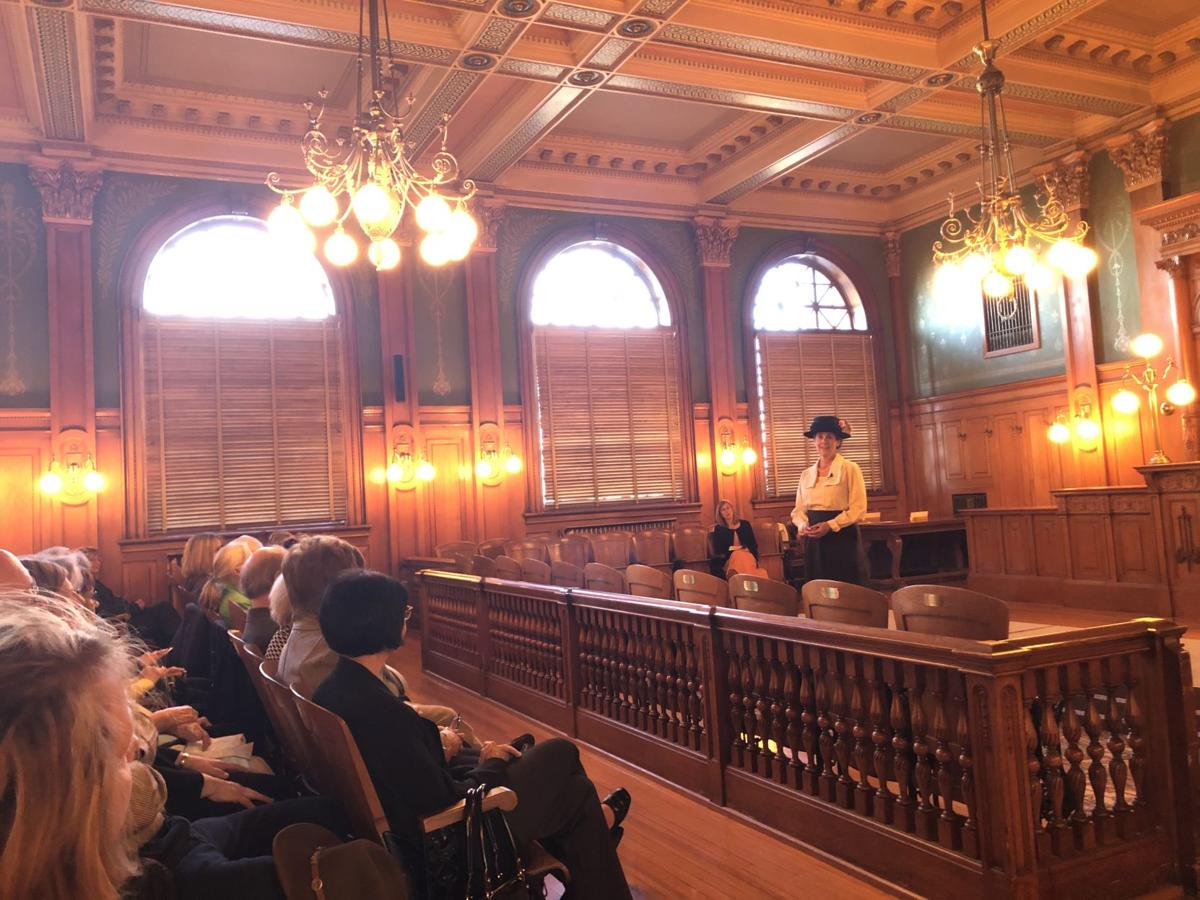 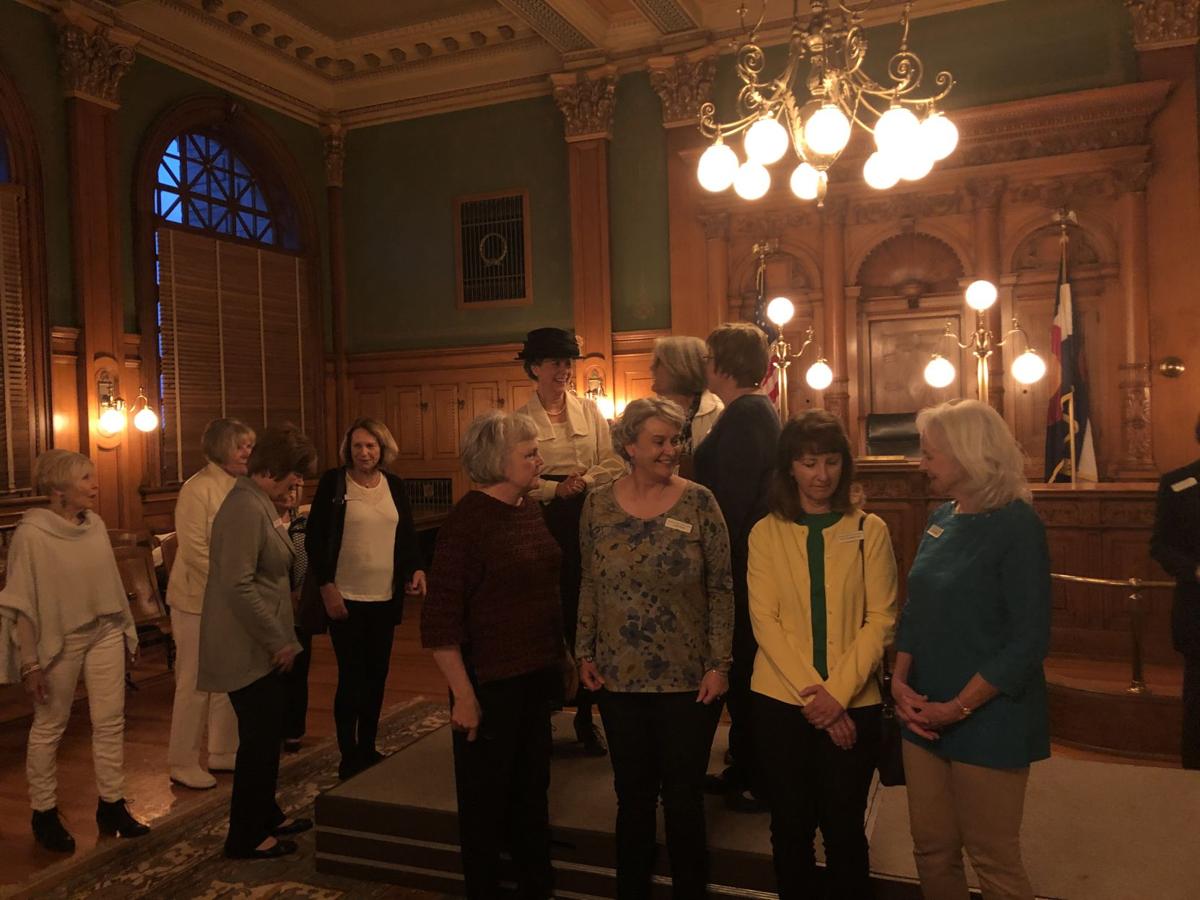 Members of the Woman’s Club of Colorado Springs gather for a photo with Mary Jane Bradbury after her portrayal of the first woman elected to U.S. federal office in 1916, Jeannette Rankin, during a Colorado Humanities historical presentation at the Pioneers Museum. 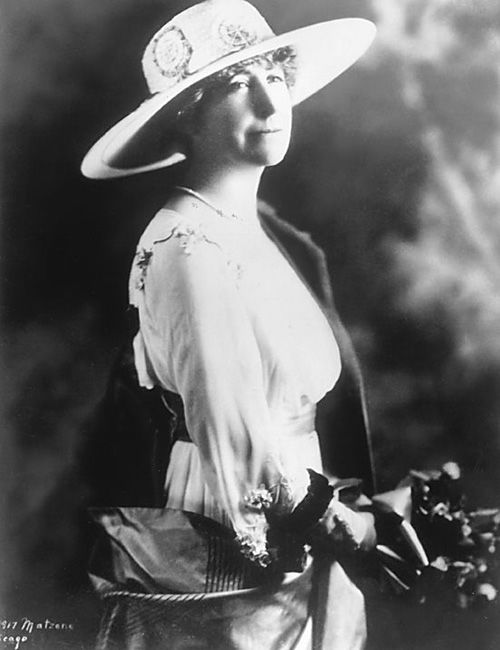 Members of the Woman’s Club of Colorado Springs gather for a photo with Mary Jane Bradbury after her portrayal of the first woman elected to U.S. federal office in 1916, Jeannette Rankin, during a Colorado Humanities historical presentation at the Pioneers Museum.

When the El Paso County Courthouse — the building that now is home to the Colorado Springs Pioneers Museum — was built in 1903, women couldn’t vote in U.S. elections.

By 1920, when the 19th amendment to the constitution was ratified, some women received that right. Later other women (and men) of color were granted legal voting rights.

Meanwhile, Jeannette Rankin, a Montana politician, made history in 1916 as the first woman elected to Congress. She canvassed 6,000 miles across the state of Montana and bucked a societal system at the time that resisted her gender as well as the fact that she wasn’t a member of the New York elite.

These and other facts presented by Mary Jane Bradbury, “historic interpreter,” actress and scholar, were spoken in character at the Pioneers Museum on the evening of Tuesday, March 10. Bradbury portrayed Rankin at “One Woman, One Vote – Jeannette Rankin in Colorado Springs,” an event sponsored by the Woman’s Club of Colorado Springs.

The living re-enactment was presented in partnership with Colorado Humanities & Center for the Book and performed at three Denver-area venues as part of a tour to celebrate the centennial year of women earning the right to vote.

Leah Davis Witherow, curator of history at the museum, opened the program by saying, “before and after suffrage, women have always worked to improve their communities.”

Bradbury stated in a question-and-answer session that she extensively researches each historic character she plays, as well as seeks to, “connect to the narrative” of their lives.

She was inspired to play Rankin, she said, because of “her humanitarian heart” leading to the awareness that “every individual matters.”

Rankin first wanted to go into social work, Bradbury shared, and attended a “school for philanthropy.” But Rankin was frustrated when she felt she couldn’t make a difference at the root of problems she saw. She decided helping to establish laws to protect vulnerable populations would enable her to make more of a difference, and determined to run for office.

Rankin subsequently fought for women’s rights, education for mothers, helped establish sanitation laws, and pushed for laws to keep children out of factories.

Before running for office, as field secretary of the National American Women’s Suffrage Association for years (which later became the League of Women Voters), her name had become well-known. Despite that, some members of NAWSA told her “not to stick her neck out” and run for office — because if she failed it would “set (the cause of) suffrage back.”

After being elected to Congress, Rankin also encountered unusual problems because, as Bradbury said in the role, “There’s no protocol when you’re the first.” Regarding one event shortly after she was elected, she received a message that said, “Wives are not included, so you are not expected to attend.”

Rankin, a pacifist, voted against entering World War I and was not re-elected after serving one term. In 1940 she ran again, and was elected again to represent Montana in Congress. On Dec. 8 of that year, Rankin was the only member of either house of Congress to vote against the declaration of war on Japan. The blowback from that vote included a need for a police escort afterward back to her offices.

Rankin was then vilified widely in the media. However, one journalist, William Allen White of the Kansas Emporia Gazette, acknowledged her tremendous courage in taking a stand against the war. He wrote, “Probably a hundred men in Congress would have liked to do what she did. Not one of them had the courage to do it. The Gazette entirely disagrees with the wisdom of her position. But Lord, it was a brave thing! And its bravery someway discounted its folly. When, in a hundred years from now, courage, sheer courage based upon moral indignation is celebrated in this country, the name of Jeannette Rankin, who stood firm in folly for her faith, will be written in monumental bronze, not for what she did, but for the way she did it.”

Bradbury said that Rankin impressed her as “a human being living a life of unbelievable courage” of conviction.

Today there is a bronze statue of Rankin in Statuary Hall at the U.S. Capitol, given by the state of Montana in 1985.