Officials putting together the puzzle of restored recreation in Waldo Canyon had hoped to have a key piece on the table later this month when they hold the last scheduled public meeting to discuss plans.

But Colorado Springs parks officials continue their “due diligence” for the Black Canyon quarry, the mountainside scar seen from the city’s west side, said David Deitemeyer, the parks department’s senior landscape architect. He has been the city’s point person on the “Reimagine Waldo Canyon” project, as the effort was coined when it launched in 2018, six years after the wildfire that obliterated much of a once-beloved trail.

“I had hoped we’d be a little further along,” Deitemeyer said. “With some of that due diligence, it just takes time.”

As for what that entailed, he referred questions to Britt Haley, head of the city’s sales tax-funded Trails, Open Space and Parks (TOPS) program. She told The Gazette she would not propose an acquisition to the TOPS Working Committee at its meeting Jan. 8 — what would likely be the first step in purchasing the quarry from Castle Concrete Aggregates. Haley declined to comment further.

The quarry plan was met with “oohs” and “aahs” at the last “Reimagine” meeting in April, when maps of the 193-acre spread showed it as the center for an ambitious trail system. 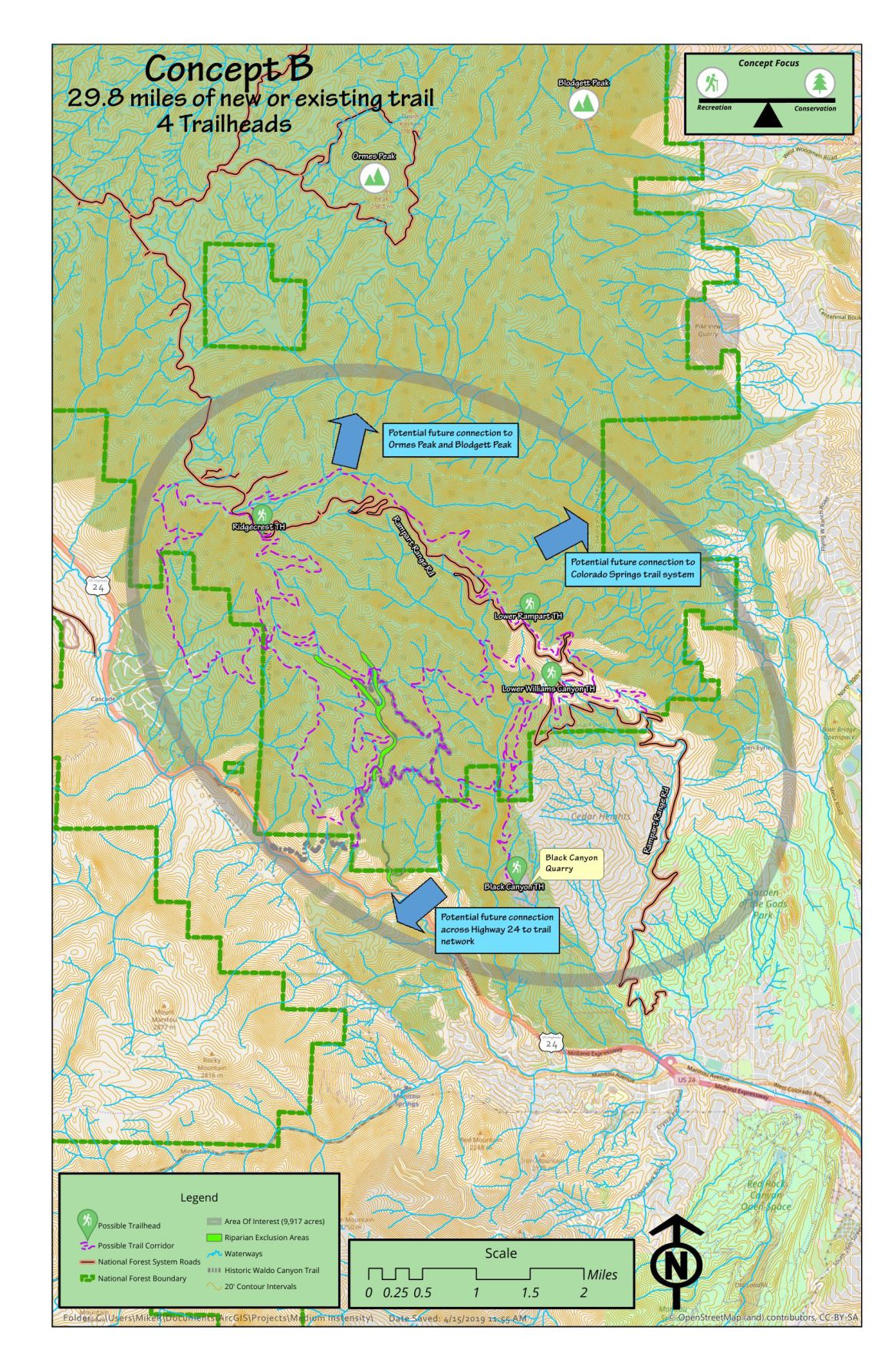 Waldo Canyon’s previous trailhead near a blind curve on U.S. 24 had been deemed too dangerous by highway officials. But the quarry could be the close-to-town access that outdoor enthusiasts craved, reached from the road that also leads to the Cedar Heights neighborhood.

And at its size, “the sky’s the limit,” said Jennifer Peterson, leading the project as executive director of the Rocky Mountain Field Institute.

The idea would be to build a parking lot and trails on the quarry, “and who knows what else,” Peterson said. “There’s a lot of potential. Let’s just say that.”

It could be the key to connecting two prized canyons, not only Waldo but also Williams, Deitemeyer said. “A fantastic amenity,” he said. “Unlike anything else we have in the region.”

“It would be a great use,” he said. “Of course, the devil’s in the details in terms of creating a safe place.”

He opposed the city pursuing the Pikeview quarry, another Castle Concrete property that came to the forefront in 2018 as the site of a possible bike park. That mine has a history of slides and instability.

Black Canyon quarry, also known as Snyder, is different, Skorman said. “It’s not the steep landscape that Pikeview is,” he said.

But Black Canyon, too, has been subject to scrutiny from regulators.

An investigation into “rock spills” in the summer of 1989 led to extensive “corrective orders” being issued, records show. They included slope rehabilitation, “a combination of reshaping, regrading or removal of material along with vegetation,” surveyors reported to the state Division of Reclamation, Mining and Safety.

They recommended the division require proof of good stewardship before a mine expansion, “(s)ince it appears that Castle Concrete has no proven method of preventing such spillage.” 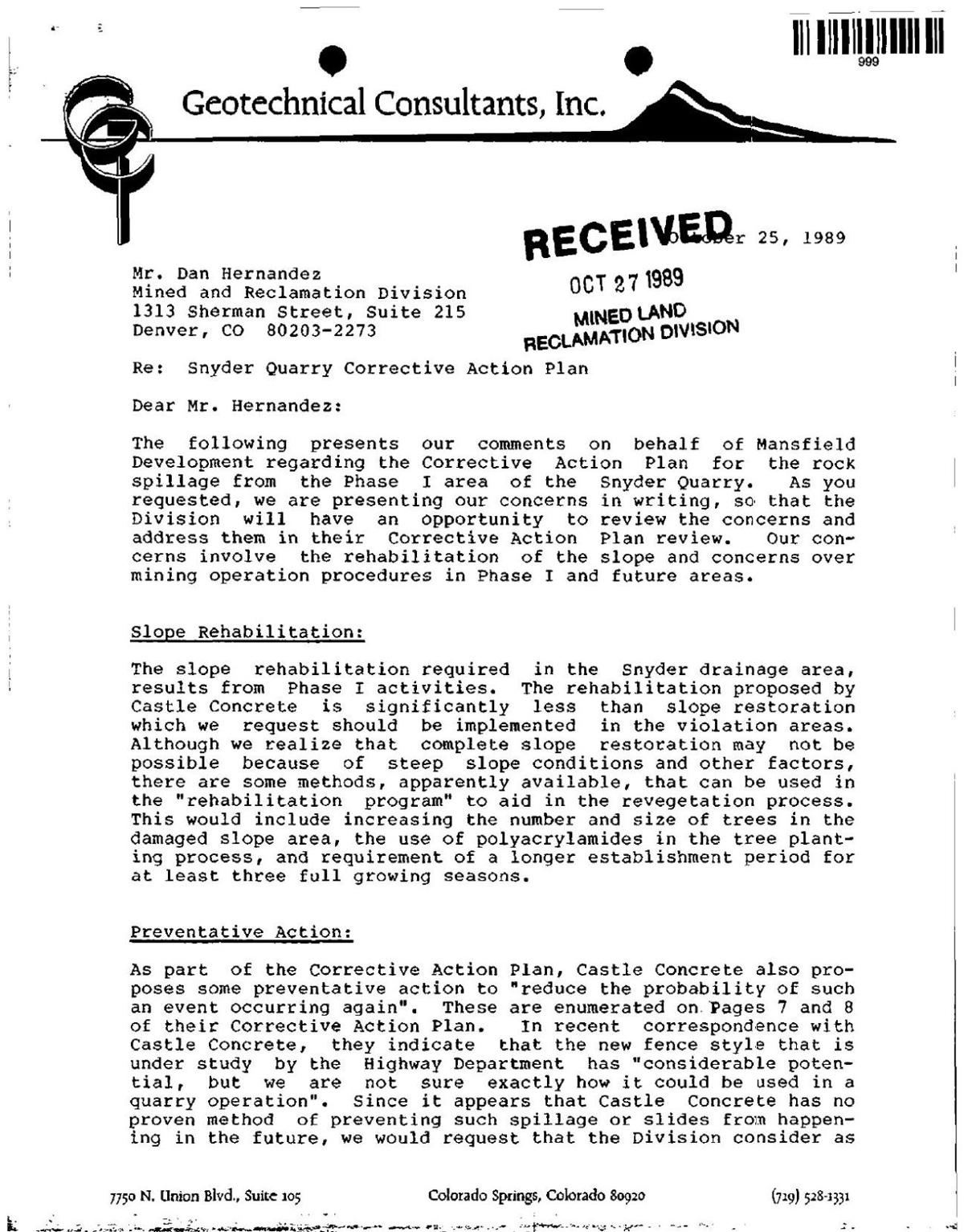 Conditions at the site appear to have improved, with annual reports through the 2000’s regularly calling the quarry “stable” and “not subject to erosion.” That was the case in 2009, when mining was considered “dormant.” It stopped in 2015, the company says, while still selling stockpiles from the quarry. Reclamation was to have started shortly after, the company says.

But recent reports cite little progress, with 2019 showing 0.5 acres being reclaimed for the year and 0.0 scheduled for the next year. The job’s bond is set at $340,000, compared with Pikeview’s multi-million-dollar amount.

It “would need a lot of work,” Peterson said. “One lane road, super unstable, steep slopes.”

That’s surely part of the city’s negotiations, she said. As is reclamation.

“We know for sure that reclamation, restoration of that area, it will be part of that conveyance,” Peterson said.

How long it would take is uncertain. When the bike park was discussed, operators said Pikeview could be reclaimed 20 years ahead of schedule.

“And if it can be stabilized, that’s the big question,” Skorman said. “But it would be great to see that happen.”

Hopefully they’ll learn more of the quarry at this month’s meeting, Peterson said, adding: “Some things are worth the wait.”