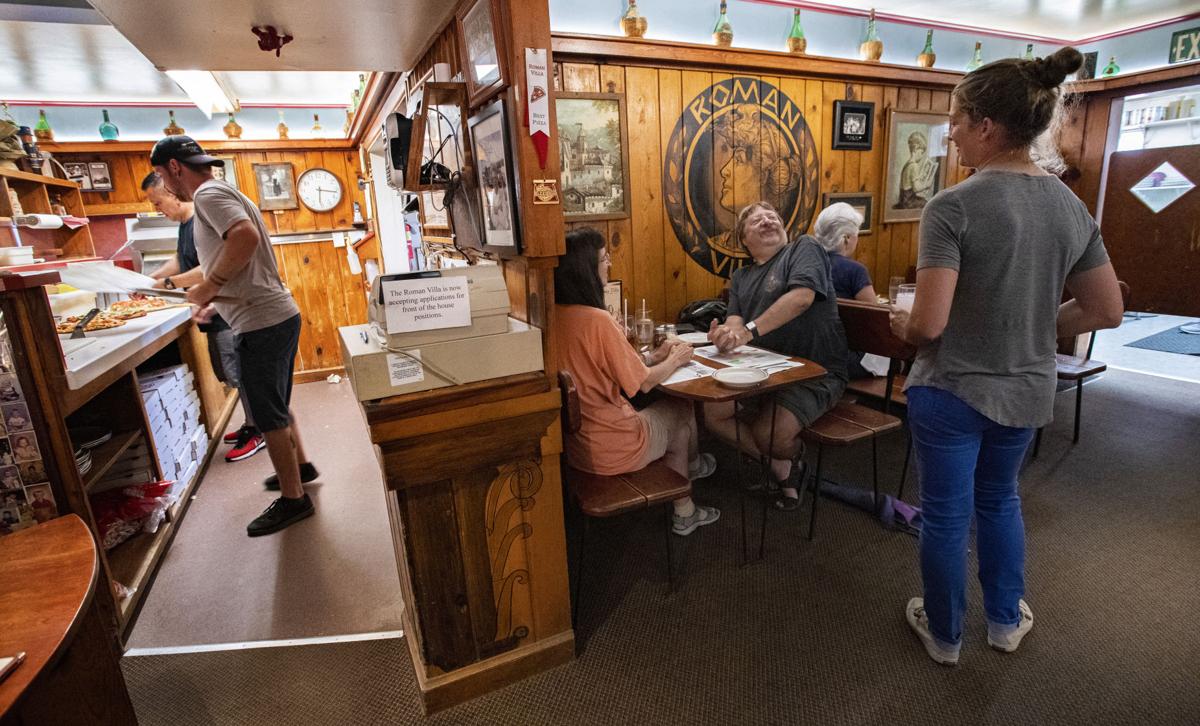 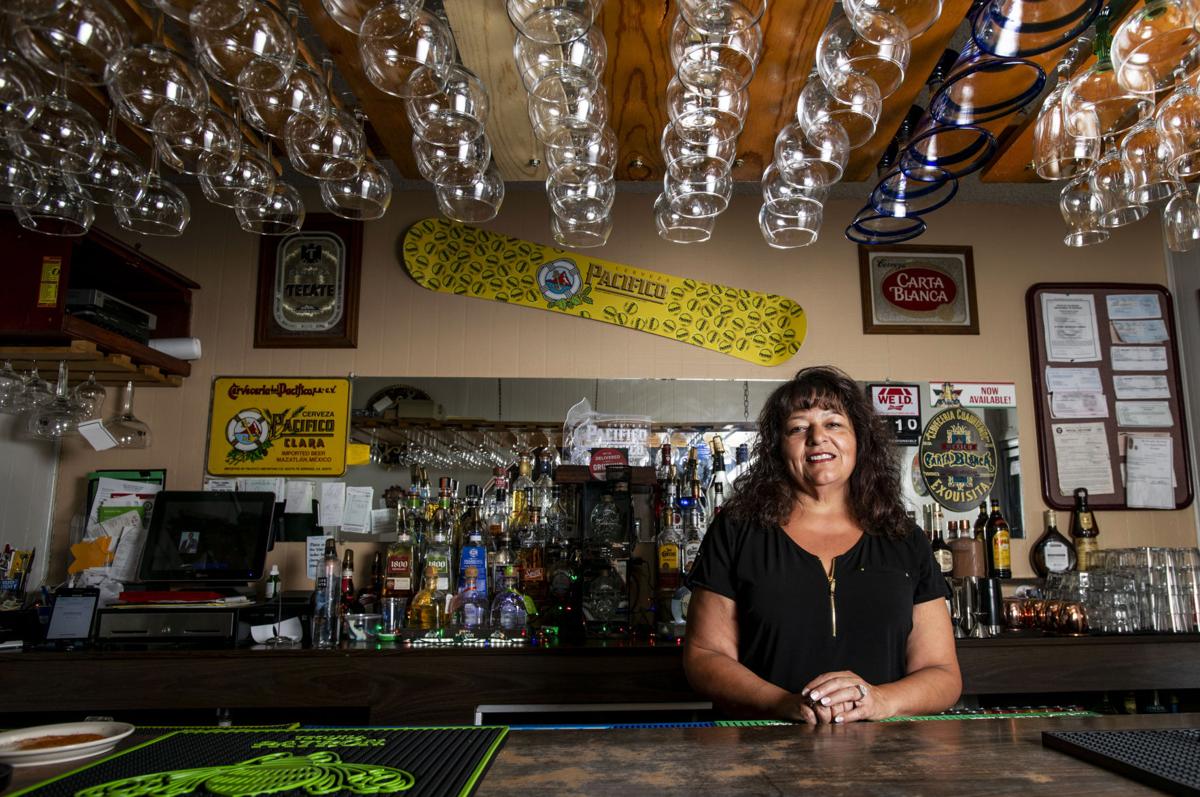 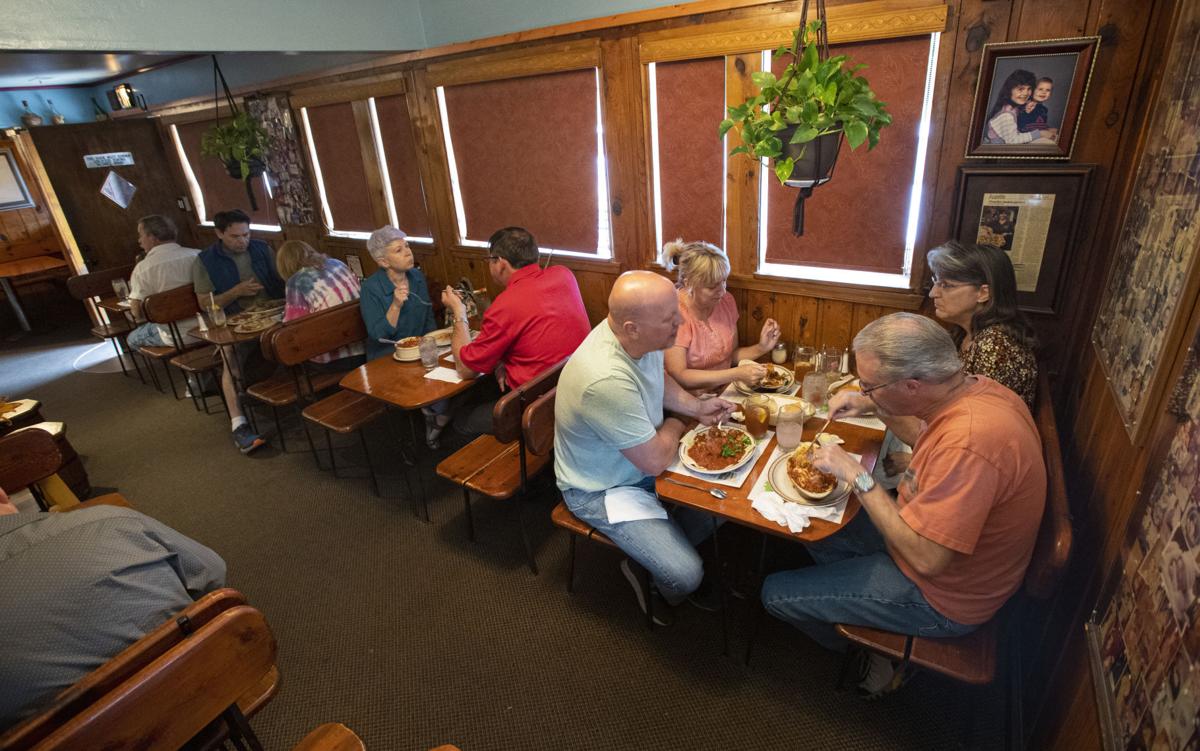 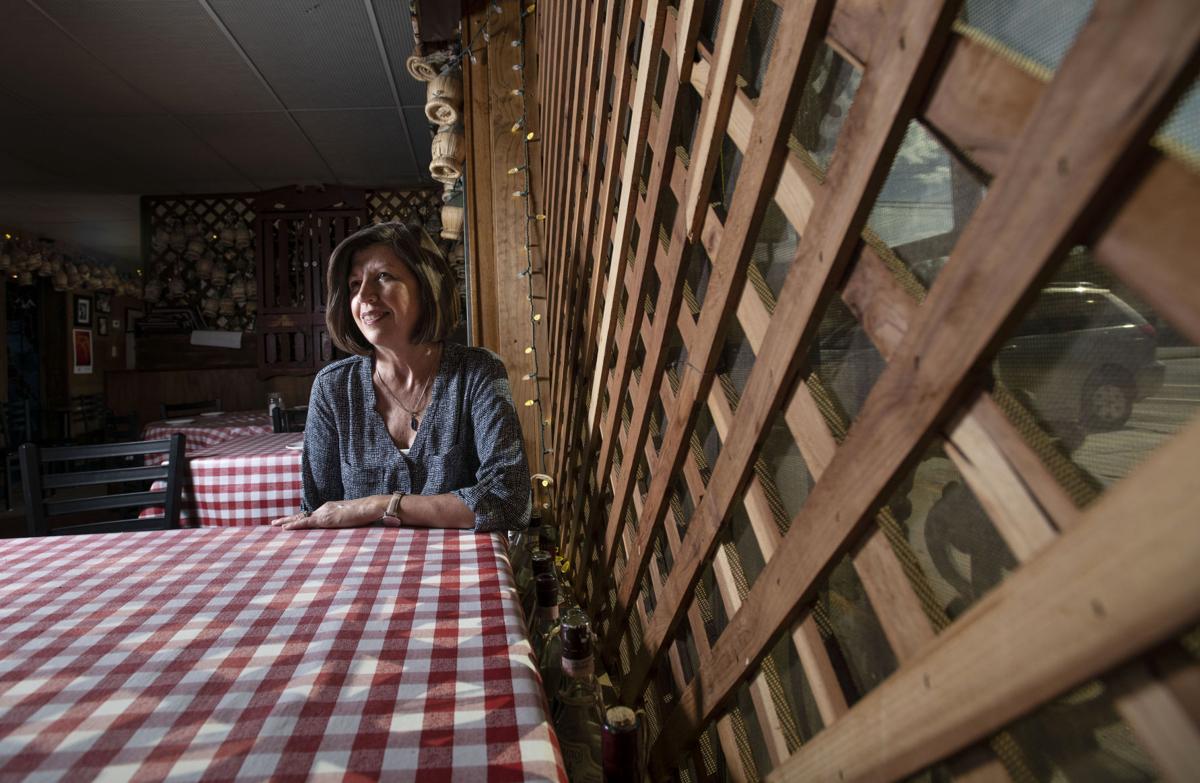 Gina Costley is the daughter of restaurant founders Leo and Anne Cervetti. 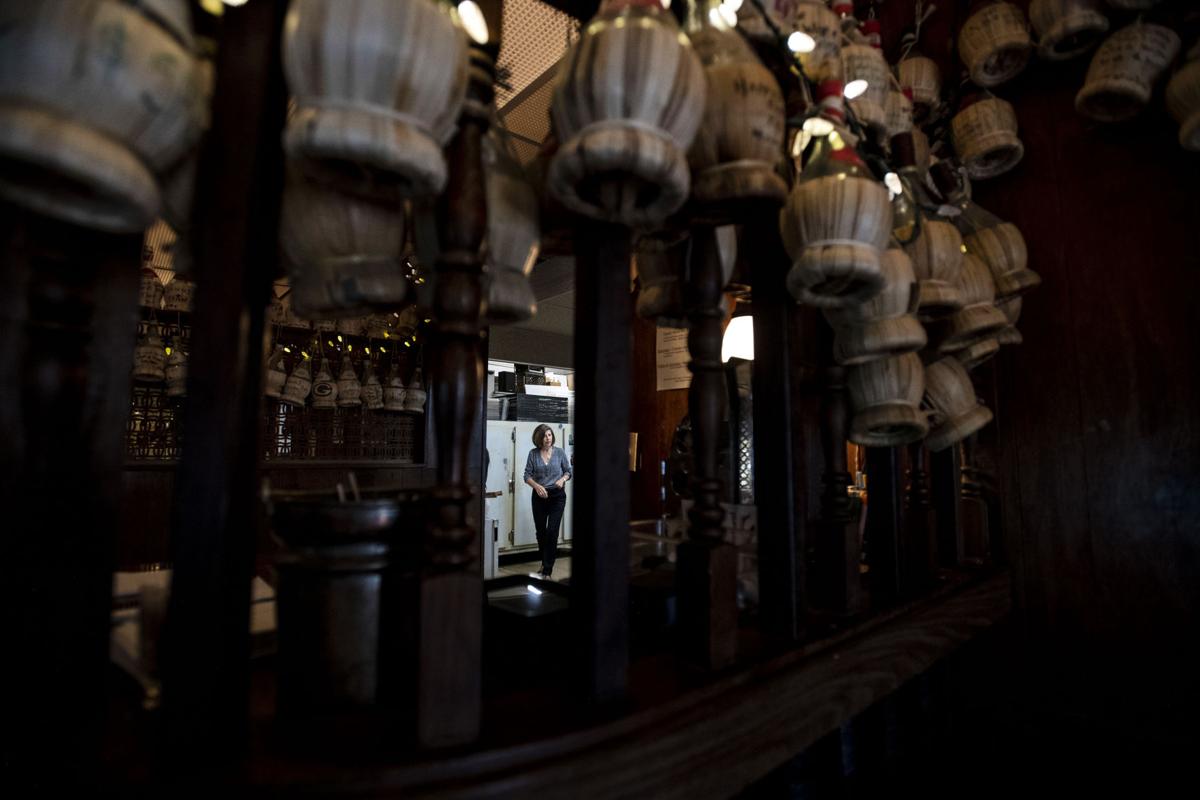 Gina Costley, co-owner of Luigi’s Restaurant in Colorado Springs, prepares for opening. Costley is the daughter of restaurant founders Leo and Anne Cervetti. 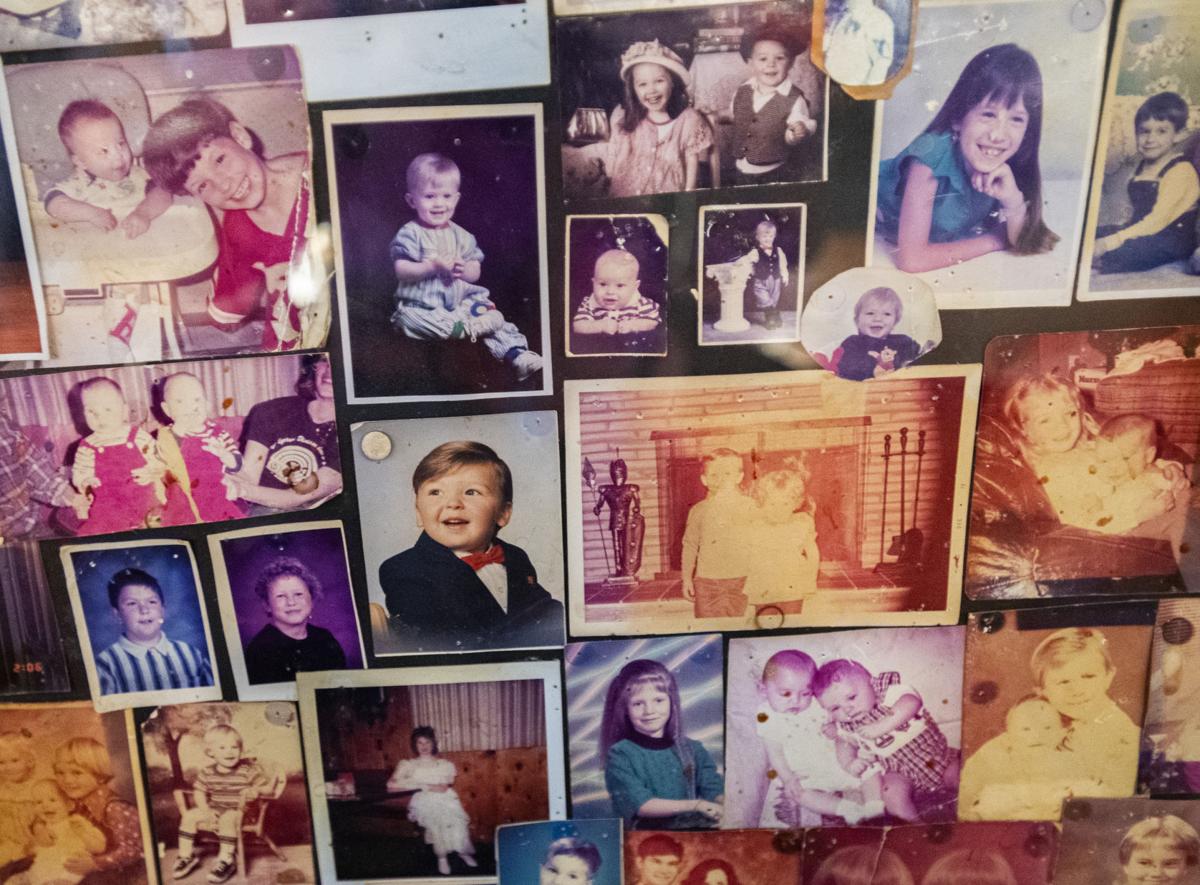 Family photos from customers over the years cover the walls Aug. 7 at Roman Villa on Nevada Avenue in Colorado Springs. The family-owned Italian restaurant celebrated its 60th anniversary this summer.

Gina Costley is the daughter of restaurant founders Leo and Anne Cervetti.

Gina Costley, co-owner of Luigi’s Restaurant in Colorado Springs, prepares for opening. Costley is the daughter of restaurant founders Leo and Anne Cervetti.

Family photos from customers over the years cover the walls Aug. 7 at Roman Villa on Nevada Avenue in Colorado Springs. The family-owned Italian restaurant celebrated its 60th anniversary this summer.

New restaurants are taking a big bite out of Colorado Springs’ dining scene.

Attracted by the area’s booming economy, steady population growth and thousands of new rooftops, national and regional chains and Denver-area concepts are flocking to the Springs.

Whether they’re quick serve, fast casual or full service, names such as In-N-Out Burger, Raising Cane’s Chicken Fingers, Jax Fish House, Fat Sully’s Pizza, the Rib & Chop House and Chuy’s are some of the new eateries that are part of the local restaurant landscape or soon will be.

Cities across Colorado have seen an influx of restaurants as the state’s economy has flourished since the end of the Great Recession. The Colorado Restaurant Association estimates there are 11,800 eating and drinking establishments statewide; that’s up by about 1,100 over the last five years.

“Folks are still going out to dinner, but they’ve got so many more places to choose from that they’re not going to their same places as often,” said Carolyn Livingston, a former Restaurant Association spokeswoman. “They’re spreading it out over different places.”

At a time when competition is heating up, however, three of the Springs’ oldest family-run restaurants — Señor Manuel Mexican Cuisine, Roman Villa and Luigi’s Homemade Italian Food — are staying cool.

Owners of the restaurants say they’ve seen the trend before; new eateries descend on the city and attract curious local diners. They’ve survived past waves of newcomers and expect to do so again.

The key: Hold true to what’s worked in the past and avoid trying to one-up new rivals.

Longtime diners enjoy their food, service and ambiance just the way it is. If they make major changes, the restaurants say, they’ll risk losing customers.

“The competition’s always in the back of your mind, and we know that,” said Mika Hernandez, co-owner with her brother, Mark, of Señor Manuel, at 4660 N. Nevada Ave. “I’m never going to be able to compete with them, so I don’t try. I just try to be good at what we do.”

Señor Manuel marks its 49th anniversary on Aug. 29; it was founded in 1970 by Mika and Mark’s parents, Manuel and Lucy Hernandez, who died in 2016.

Today, Señor Manuel still specializes in made-from-scratch dishes and makes its chips and tortillas in a basement tortilla factory.

The restaurant is run by Carla Tong, Del and Lina’s daughter, and Carla’s daughter, Amber Shaffer; it’s known for pizza, lasagna amd tortellacci, served in a wood-paneled dining room that the owners describe on their website as reminiscent of an old-style Chicago eatery.

Luigi’s makes its own sauces, meatballs, Italian sausage and several of its pastas. Its dining room is decorated with 1,400 empty wine bottles whose straw-covered bottoms are often signed by diners celebrating birthdays, anniversaries and other events — a tradition that began about 15 years ago.

Those are the kinds of touches that diners have come to expect and don’t want to be changed, even as chains and others bring new trends and concepts to town, the owners say.

“I don’t blame people for wanting to try them,” Tong said. “I hear all the time about new places. They love to try them. That’s great. But then, there is that place that you go to that’s like home.”

Repeat customers know what they want when they walk in the door. If recipes are changed or ingredients tweaked, they’ll know it — and won’t hesitate to say so.

At Señor Manuel, Mika’s brother Mark does all of the cooking, which maintains the quality of the food.

“Prior to that, it was my dad,” she said. “This is what we do. And this is how we’ve done it. Our clientele is very supportive, very loyal, very demanding.”

“You just don’t mess with it,” Tong said. “People come here expecting to get what they got 60 years ago or 20 years ago or 30 years ago. It’s important that you really keep that consistency.”

Food quality and consistency are “sacred,” said Costley, of Luigi’s.

“You can’t cut corners there,” she said. “We have people that faithfully come weekly for years and years and years. We try never to change anything.”

Occasionally, however, changes must be made when vendors no longer are available. Years ago, Luigi’s bought its bread from a bakery on the city’s west side. When the bakery went out of business and the restaurant had to look elsewhere for bread, customers noticed immediately.

“And they were very upset about it,” Costley said.

Customer expectations — and aversions to change — don’t stop at the food.

Gina and Les Costley became owners of Luigi’s about 15 years ago after buying out one of Gina’s sisters and her husband with whom they shared ownership. They made a few upgrades — new windows, carpeting and chairs. Customers began to worry that wholesale menu changes were coming, too.

While they maintain their longtime recipes and food quality, the restaurants have listened to customers who have special dietary needs. Roman Villa has a handful of gluten-free menu items, for example, while Señor Manuel and Luigi’s accommodate gluten-free and vegan needs.

While the restaurants say they won’t mess with their menus and food, they haven’t rejected behind-the-scenes upgrades to improve how they do business.

Señor Manuel has a new computer system that’s easier for servers to understand — allowing them to focus on learning the menu, Mika said.

They’ve added the Uber Eats and Grubhub delivery services. The two services provide iPads so that restaurant employees can see food orders and call customers, if needed, to ensure they’re getting what they want.

“So we’re still retaining some of that control,” Mika said.

Costley said she learned of misinformation being spread via the internet — when customers Googled the restaurant’s name, they read — falsely — that Luigi’s had closed. Costley was able to take control of her restaurant’s information on Google and correct it — a significant help, she said.

She also began advertising on Facebook about a year ago, spending about $150 a month to reach roughly 30,000 people and was able to target ads to reach tourists and other specific demographics. The ads created an immediate response last year and a sizable increase in business, she said.

“We’ve done every type of advertising over our 61-year career,” she said. “Newspaper, radio, television. We’ve done all that. I’ve never had the response that we’ve had to this.”

The restaurants also have Facebook pages that allow them to post customer photos, spread the word about restaurant specials and field comments and questions.

Customers are part of family

Decades of service mean plenty of regular customers, including families who’ve been coming to the restaurants for years. Getting to know them is a big part of the restaurants’ success.

“We have generations that have come in for years and year and years,” said Tong, of Roman Villa. “It’s very personal. We know what they like because they’re repeat customers. You keep that in your head — they like it this way or they like that. It’s all about having a good dining experience.”

At Señor Manuel, customers who celebrate special events often don sombreros provided by the restaurant, which posts their photos to Facebook.

“We have one family who’s in their fifth generation as a client,” Mika Hernandez said. “They come to us with their life’s highs and lows. ... And that makes it very special for us.”

But it’s not just longtime customers who are important. Tong said newcomers often are looking for a family-style restaurant that reminds them of a city where they grew up or from where they just moved.

“We heard about you from a friend or you remind us of a place back home that we just loved,” Tong said she’s heard from new customers. “Or, ‘I’m from Ohio and we had a great pizza place there.’ I just had a guy in last week from New York, and someone recommended you. ... When they find us, it’s kind of special.”

Dutch Bros and Starbucks poised for expansion in Colorado Springs

Two of the area’s best-known coffee brands are brewing up another round of store expansions in the Pikes Peak region.