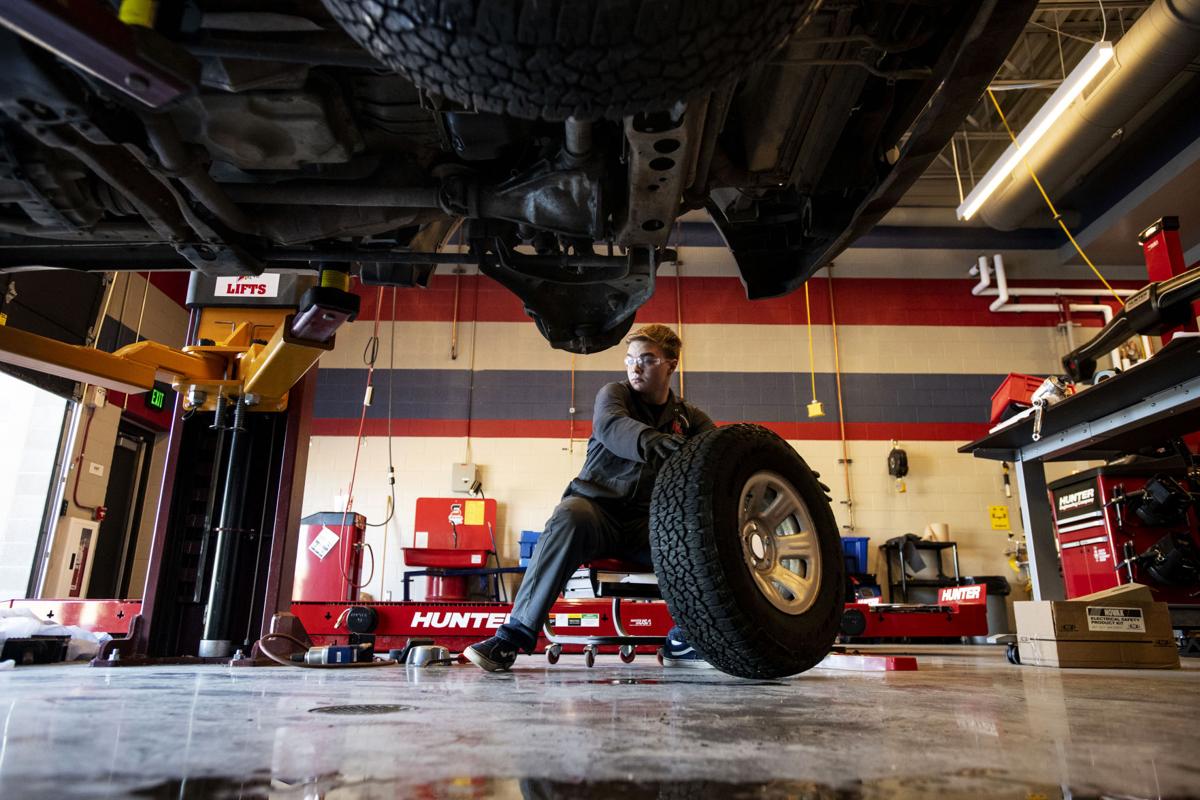 Liberty junior Theo Clayton takes a tire off a 2008 Ford Ranger to change the front brakes during automotive trade course at Liberty High School on Jan. 28. 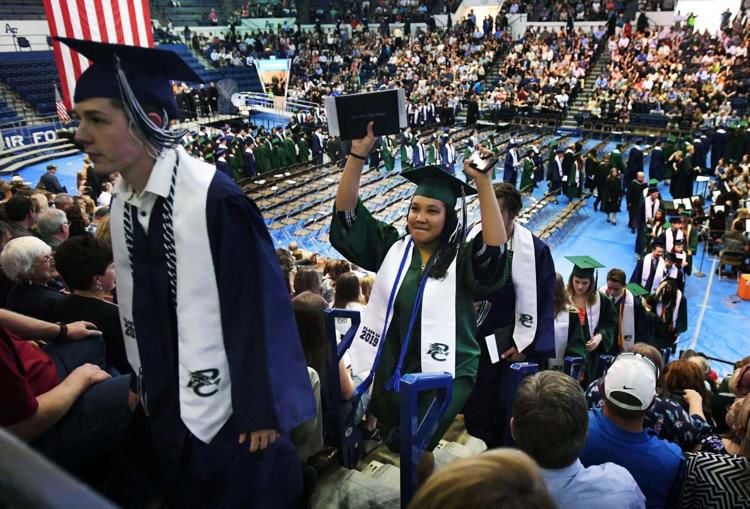 Lifting high her diploma, newly graduated Mariah Lemuel (center) and other graduates from Pine Creek High School head up the stairs at Clune Arena at the Air Force Academy on May 15.

Liberty junior Theo Clayton takes a tire off a 2008 Ford Ranger to change the front brakes during automotive trade course at Liberty High School on Jan. 28.

Lifting high her diploma, newly graduated Mariah Lemuel (center) and other graduates from Pine Creek High School head up the stairs at Clune Arena at the Air Force Academy on May 15.

Chalk it up to the popularity of the “gap year,” climbing college costs or emerging career fields that don’t require degrees.

Whatever the reason, Academy School District 20, a high-performing district of about 26,600 students, has seen a noteworthy decline in the percentage of students entering college within the first year of graduating from high school.

Of the district’s 1,934 graduates in the class of 2018, 71% matriculated to two- or four-year colleges or universities, according to the district, which pays the nonprofit National Student Clearinghouse Research Center to collect the data.

That’s down from 76% for the class of 2017 and comes after extended stagnation, said Jim Smith, D-20’s assistant superintendent for student services.

“While this drop is the first significant change in the district in more than eight years, it does reflect the national trend that is often referred to as the ‘post-recession decline’ in student enrollment in college,” Smith said.

Up to an additional 5% of students go to college after the first year post-graduation, he said.

College enrollment historically has decreased in a strong economy, as high school graduates secure adequate jobs from the onset, he said.

That led the campus to offset decreased revenue with emergency funds and hold off on raises and promotions. Enrollment for this semester will be tallied this week.

The school attributes the growth to a “continued focus on developing programs to address our community’s workforce needs,” such as last semester’s opening of a new Center for Healthcare Education and Simulation, said PPCC spokeswoman Karen Kovaly.

Specific digital marketing campaigns and a new texting initiative, which “allows us to make a one-on-one connection with students during the application process,” also are attracting students, she said.

The need for skilled-trades workers, new industries such as cybersecurity and information technology requiring training and certification instead of degrees, and families weighing the expense of college versus the return on investment also contribute to declining college enrollment, officials believe.

“Not all kids are destined for college, and not all kids should go to college,” said Alan Thimmig, principal of Liberty High School in D-20, which last semester opened an automotive tech shop, a building and construction center, and certified nursing assistant and emergency medical technician programs for students district-wide.

“I’ve seen kids who go to college and kind of have an idea of what they want to do after high school, but you don’t see a lot of enthusiasm and motivation,” Thimmig said. “The same kids have motivation in these programs.”

The new classes are popular, the principal said, and part of a $19 million expansion to the school, a result of a $230 million bond measure voters approved in 2016.

While the trends are interesting, what school districts do with the information is what counts, said Lori Benton, executive director of learning services for Lewis-Palmer School District 38 in Monument.

Another high-achieving district, Lewis-Palmer normally has about 80% of its 500 to 550 graduates enter two- or four-year colleges, she said. That excludes students who seek industry certification, volunteer for military service or become missionaries, for example.

“We’ve been figuring out how to meet the needs of the other 20%, who aren’t accessing college in that first year after graduation,” Benton said.

D-38 is trying several programs, she said, including adding courses for students to earn industry certificates and offering the chance for students to graduate high school in five years instead of the traditional four, while taking career preparation courses.

For both Academy D-20 and Lewis-Palmer D-38, the majority of students stick in Colorado.

Over the past five years, Rampart High School in D-20 leads local high schools in sending the most freshmen students to UCCS for the fall semester, at 458 graduates, statistics show.

What that indicates, she said, is the ongoing need for school districts to work with community leaders and businesses to provide work-related experience for students and training that matches job market needs.

Just one-third of all American adults have a bachelor’s degree, yet “We have this massive push to get kids to college,” Benton said. “Our philosophy is to prepare them for a successful first career.”

Under a new program from Pikes Peak Community College, assailants, robbers, thieves, drug dealers and abusers in county jail are learning how …