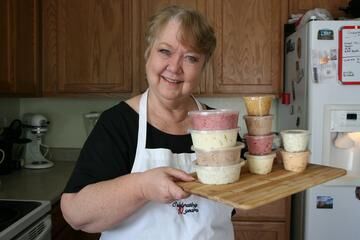 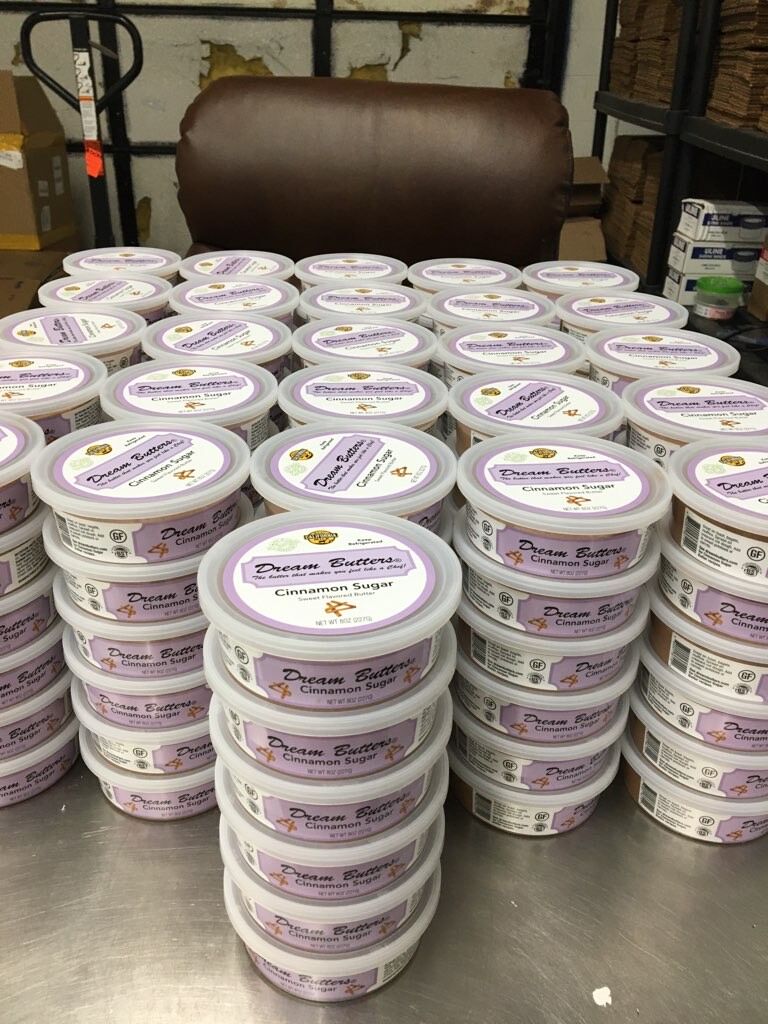 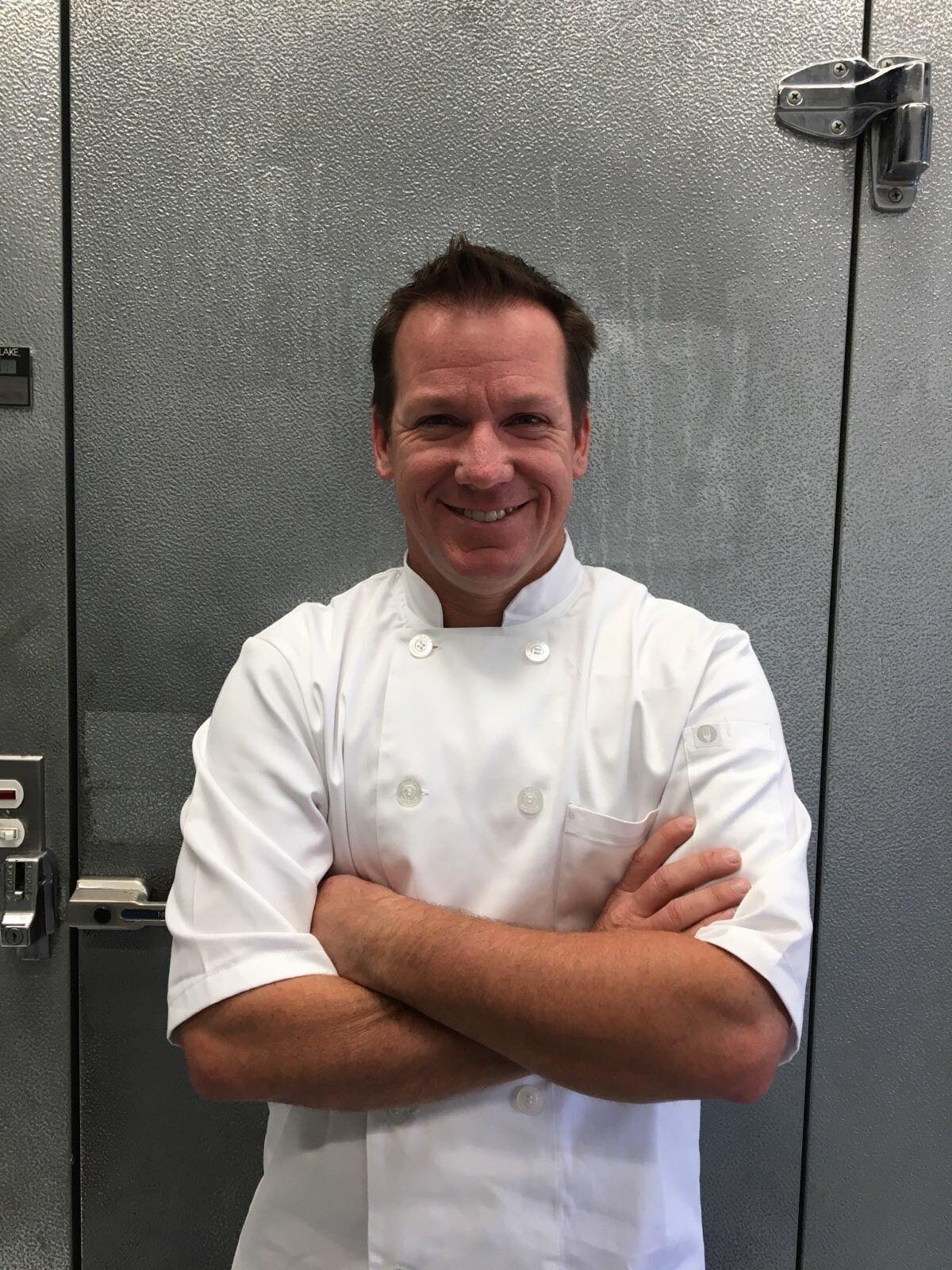 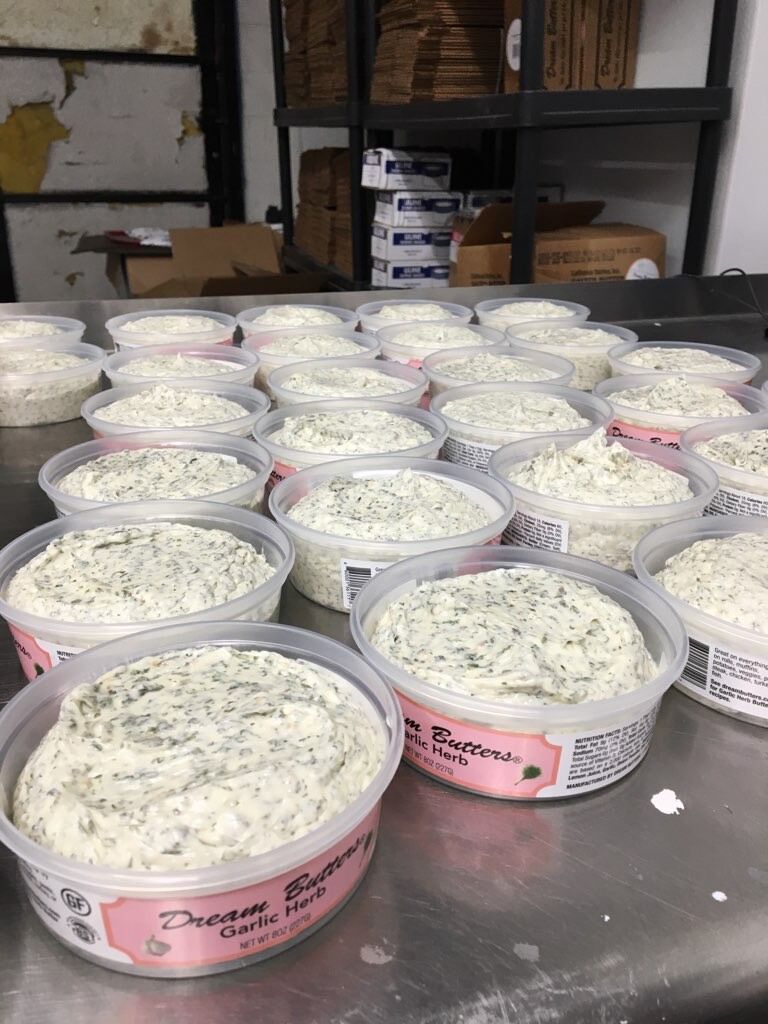 Dream Butters Garlic Herb butter is processed into tubs and sold for $6. Locally, it is available at many Safeway stores and will be at the Women’s Expo with a Cause, Norris-Penrose Event Center on Nov. 7 and 8. 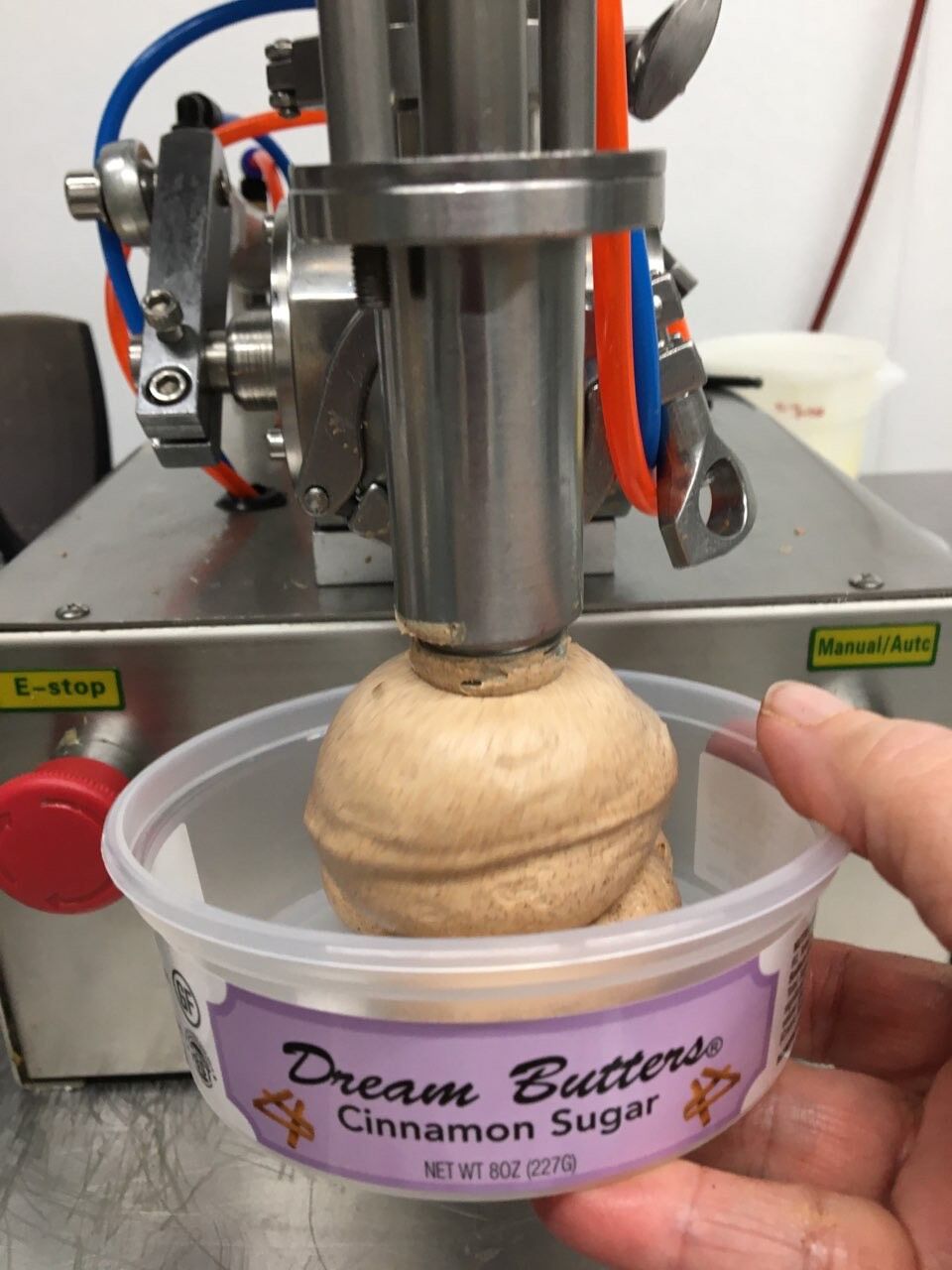 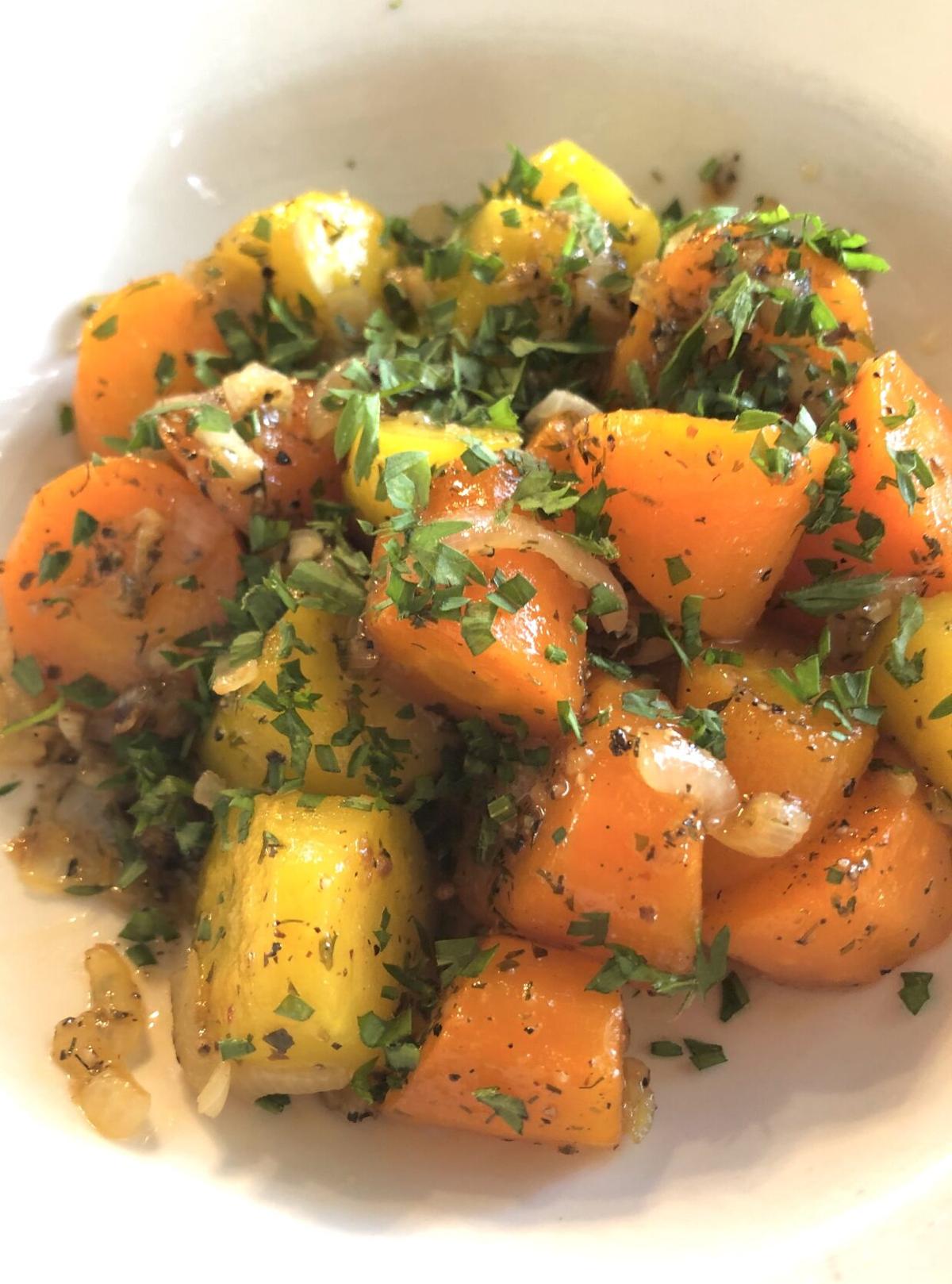 Sauteed carrots in Dream Butters Garlic Herb butter is a nice way to develop flavors without all the hassle of chopping up herbs. A splash of honey and a sprinkle of parsley completes the dish. 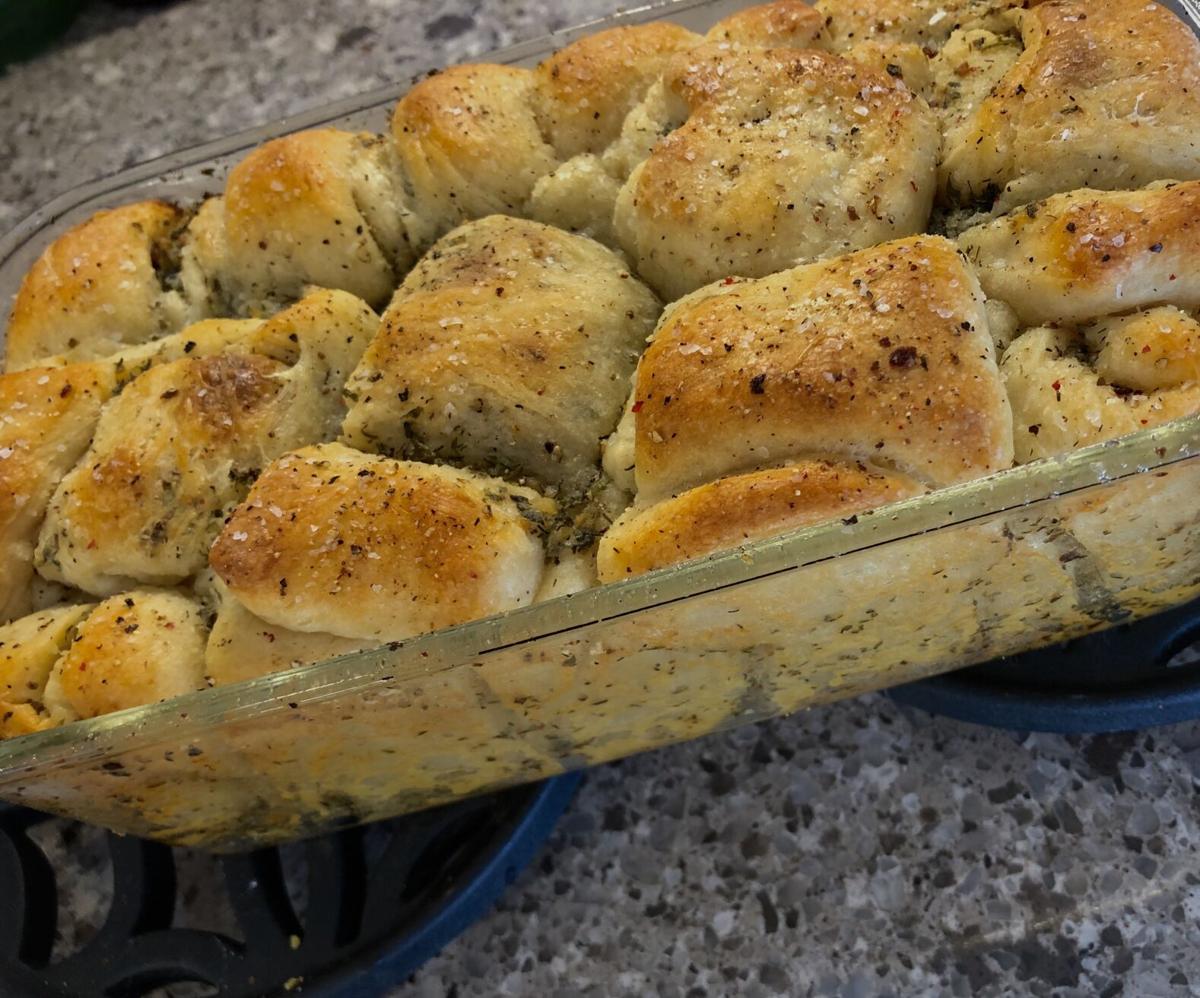 Dream Butters’ Garlic Herb butter is a mix of California butter, garlic, herbs and lemon juice. It works perfectly in Garlic Pull-Apart Bread or slathered on pasta or potatoes.

Dream Butters Garlic Herb butter is processed into tubs and sold for $6. Locally, it is available at many Safeway stores and will be at the Women’s Expo with a Cause, Norris-Penrose Event Center on Nov. 7 and 8.

Sauteed carrots in Dream Butters Garlic Herb butter is a nice way to develop flavors without all the hassle of chopping up herbs. A splash of honey and a sprinkle of parsley completes the dish.

Dream Butters’ Garlic Herb butter is a mix of California butter, garlic, herbs and lemon juice. It works perfectly in Garlic Pull-Apart Bread or slathered on pasta or potatoes.

Colorado Springs-based Dream Butters offers a variety of flavored butters that will help anyone to cook and bake with ease.

Mom-and son-team Susan and Brad Tyra started the business after a dream that Susan experienced one night. In the dream, her son, a trained chef who studied at the California Institute of Arts, was standing behind her, poking her in the shoulder, “I think we should make flavored butters,” he was saying. Susan woke up and got to work.

Her intensive research revealed there were no flavored butter producers here in Colorado. She learned all she could and invented 65 flavors of butter before even presenting the idea to Brad.

“I was in Pennsylvania trying out for the Olympics in [track] cycling, when Mom first posed her idea,” he said. When he got back to Colorado, the two sat down and reviewed her extensive list of flavors and business research. “Mom, you’re a genius!” he told her.

Before they could even create any flavors, Brad was so in love with the idea that he was designing the logo and dreaming of production teams.

The two whipped up butter concoctions on their Kitchen Aid mixer and offered samples to friends who acted as their beta testers. They whittled their flavor list down to 35 and now carry the Top 15 flavors. That was five years ago.

The mother-son team began attending holiday craft shows, carrying with them the butters in ice trays for sampling. “Oh my God, they flocked to us,” said Susan. Their first show was the Molly McGee Craft Market in Longmont. “We made $4,000 and sold out of everything the very first day of the show,” said Brad.

He drove back to Colorado Springs that night to enlist the help of friends who stayed up past midnight making and packaging more butter to sell the very next day.

Flash forward to 2020 and the two have now moved to a commercial kitchen and run a brick-and-mortar store (3470 N. Chelton Loop, Unit C Colorado Springs.) They also offer special holiday flavors such as pumpkin spice (which is great on baked sweet potatoes), and cranberry orange. All are priced at $6.

When COVID-19 roared its ugly head, the duo decided to promote the product in local farmers markets.

Vegans and lactose intolerant, fear not! Dream Butters hasn’t forgotten about you. Farmers market customers often commented on their difficulty eating milk products, so the Dream Butters team came up with their very popular spice dry mixes. Each container is $3 with four flavors to choose from including Rosemary, Garlic and Herb, Jalapeno Lime, and Pepper Thyme. They can be mixed with non-dairy or nut butters or can be used as dips when mixed with sour cream or cream cheese.

And after years of working toward the goal of distribution, two flavors of Dream Butters are sold in area Safeway stores — Garlic Herb and Cinnamon Sugar. To see if your store carries their butters, visit dreambutters.com/store-locator.html.

The mother-and-son entrepreneurs have always had a special bond. “He makes me laugh,” Susan says. Each brings different skills to the table that work well with one another. Mom Susan does the computer work, while Brad does the baking and heavy lifting.

Susan raised Brad and his two siblings in the San Joaquin Valley in California. She worked for the California Institute of Art in the financial aid department for 12 years.

When Brad graduated from culinary school in 2005, and was set to be married, but instead he had a dream of his own. Brad awoke shaken from a vision that he should break off his engagement and move to Colorado. He prayed about the dream and finally decided he should follow this calling.

But it wasn’t that easy. He arrived in the Centennial State without a job or a place to live. “I sent out 42 resumes to 42 restaurants and got 42 rejections,” he said. Initially, he was hired by Sweet Basil in Vail, but he couldn’t afford to live in the mountain town.

The next day, he met an old friend and things started to fall into place. “I got a job, a place to live and met my future wife, all in one day,” he says.

Susan followed Brad to Colorado shortly thereafter. Both graduated from UCCS with degrees in communications.

Brad, his wife Jaime, and their four children hosted Susan until she could find a place of her own. Jaime has been deployed through the Army National Guard since March 3 and will be back home four days before Christmas. Brad is remodeling their kitchen while she’s gone and plans to host cooking classes on the Dream Butters YouTube channel (bit.ly/350cTla).

Dream Butters will be participating in the Nov. 7 and 8 Women’s Expo with a Cause, Norris-Penrose Event Center, 1045 Lower Gold Camp Road. The event supports TESSA, a Colorado Springs nonprofit that assists victims of partner and sexual violence. Expo hours are 10 a.m. to 5 p.m. Saturday and 11 a.m. to 4 p.m. Sunday. General admission is $7 and children 12 and under are free. Info: womenslivingexpo.com.