In the five years since the Waldo Canyon fire erupted, destroying 347 homes and killing two people on the west side of Colorado Springs, neighborhoods have been rebuilt, bonds of friendship strengthened by shared tragedy. Across the 18,247 acre Waldo Canyon burn scar, restoration continues amidst a palette of end of spring green. And yet the forest will not be the same in most of our lifetimes. Homeowner mitigation efforts have been impressive since those two deadly events. Real progress has been made. But fire experts warn that much remains to be done – and, in fact, in some areas much remains the same, just as susceptible to the next big burn. 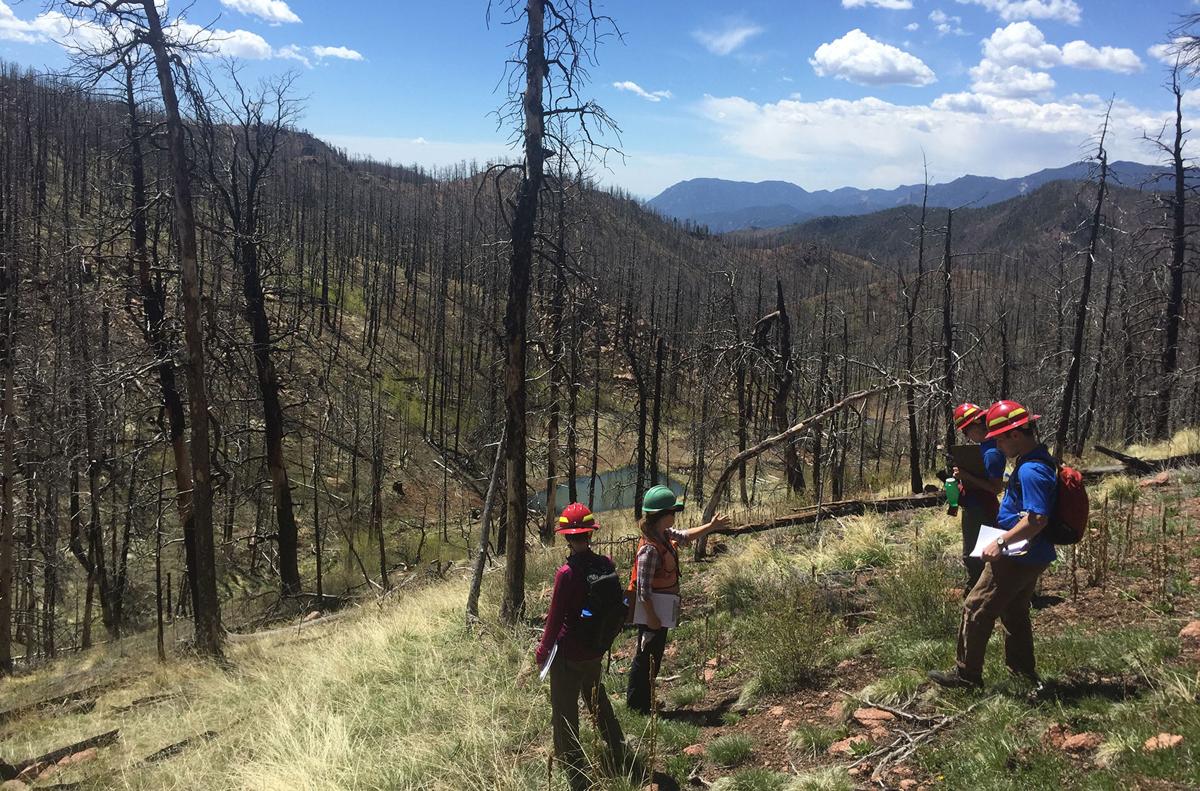 Staffers with the Rocky Mountain Field Institute and U.S. Forest Service enter a valley along the Waldo Canyon burn scar to check on the progress of willow trees they planted in 2016. (Photo by Seth Boster, The Gazette) 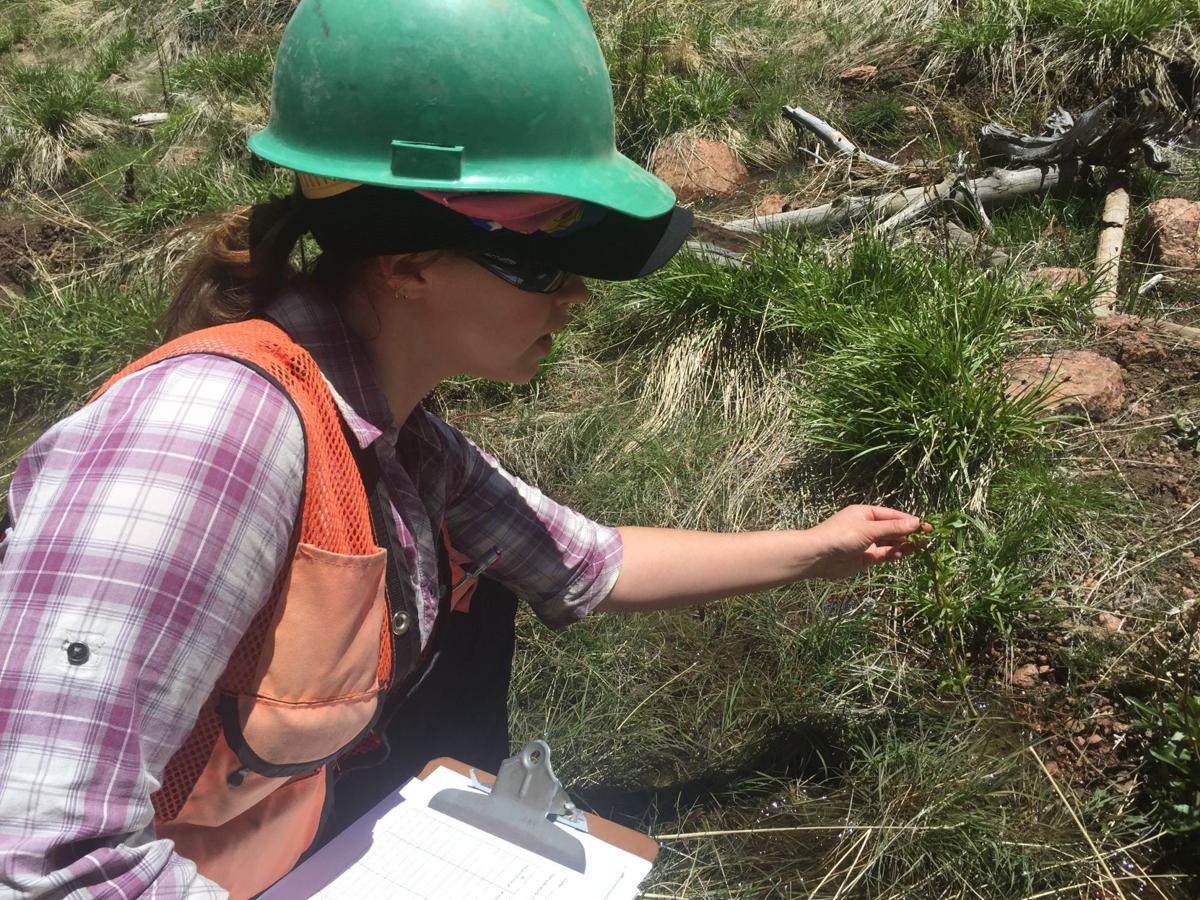 Leah Shipstead with the U.S. Forest Service observes the sprouting of a willow tree in a recovery area of the Waldo Canyon fire burn scar. (Photo by Seth Boster, The Gazette) 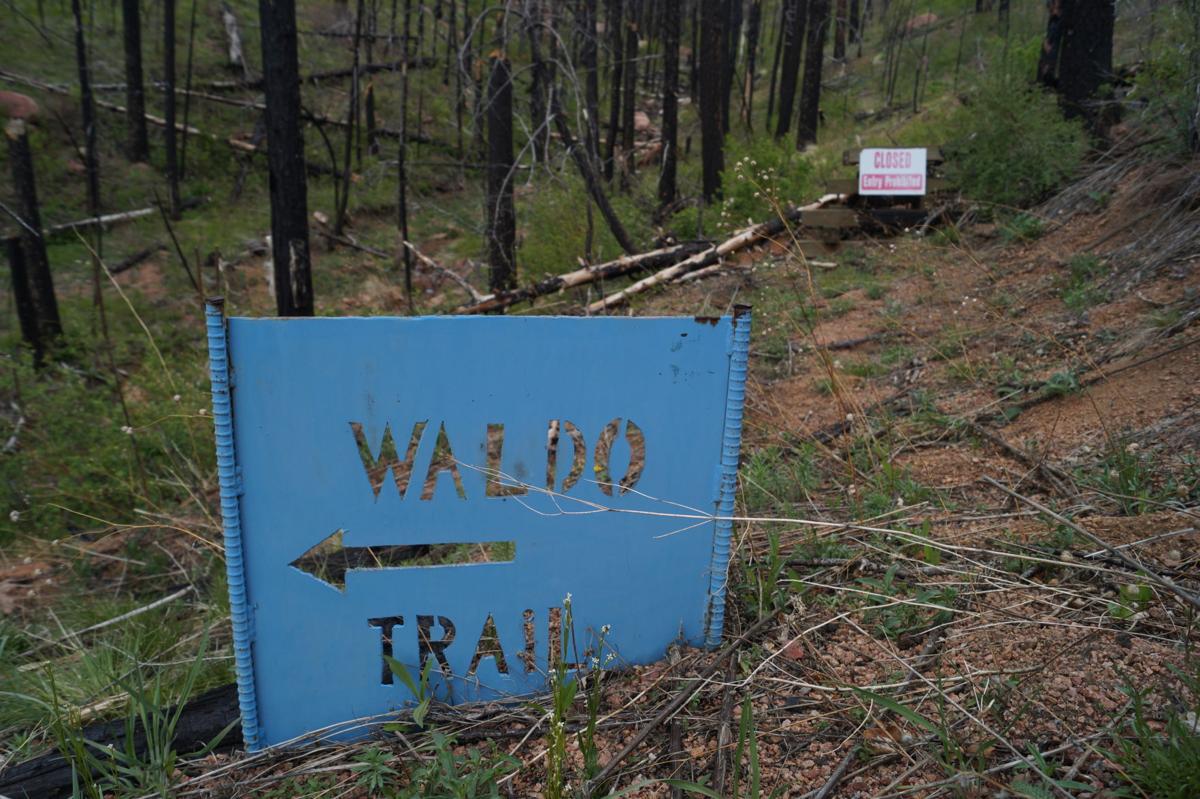 A sign for the Waldo Canyon trail stands before a sign warning people of trespassing. The trail has been closed since the 2012 wildfire, and the U.S. Forest Service has no plans to allow access in the canyon. (The Gazette file photo)

Satellite images capture the before and after images of the Waldo Canyon fire. 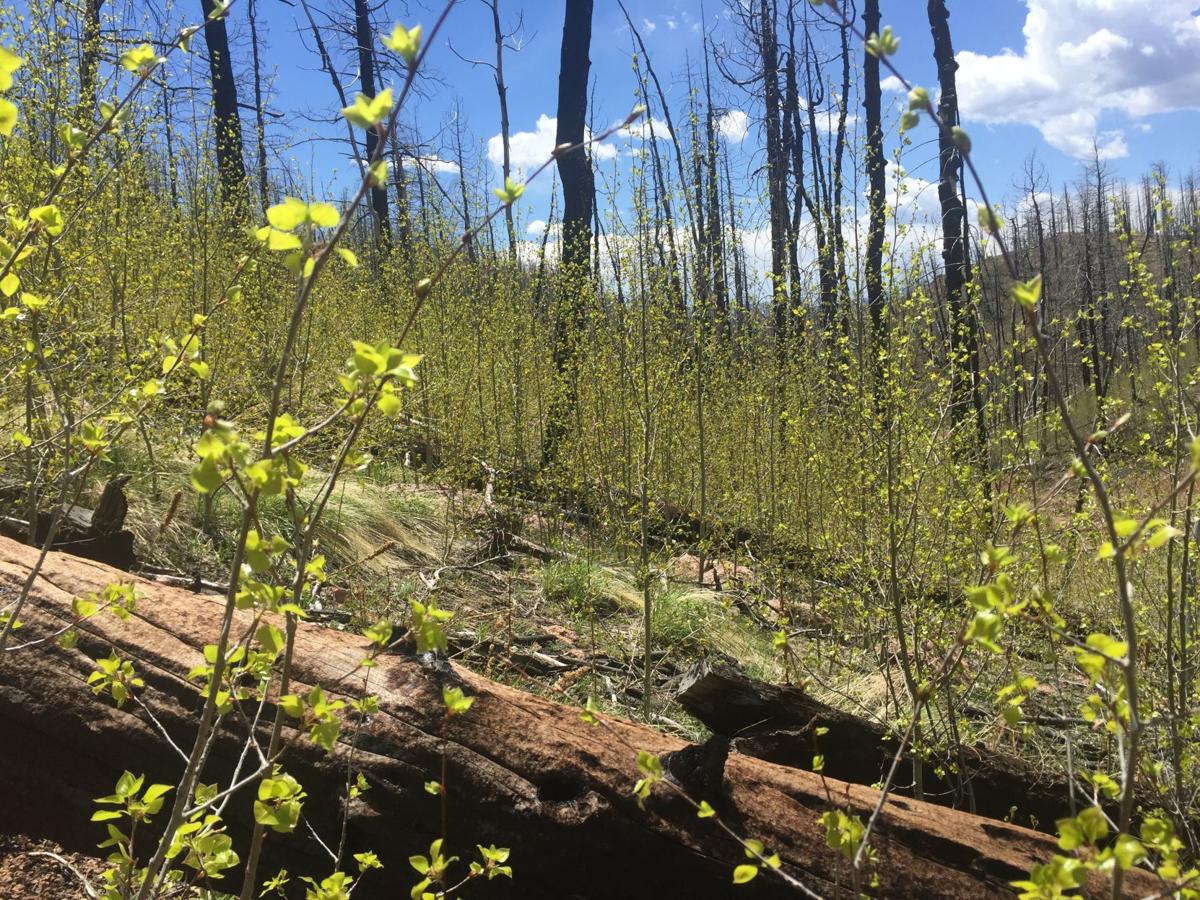 Aspens sprout in an area along the Waldo Canyon fire burn scar. As part of the natural cycle of the forest, aspens are expected to replace conifers as the dominant tree species across the burn scar. (Photo by Seth Boster, The Gazette) 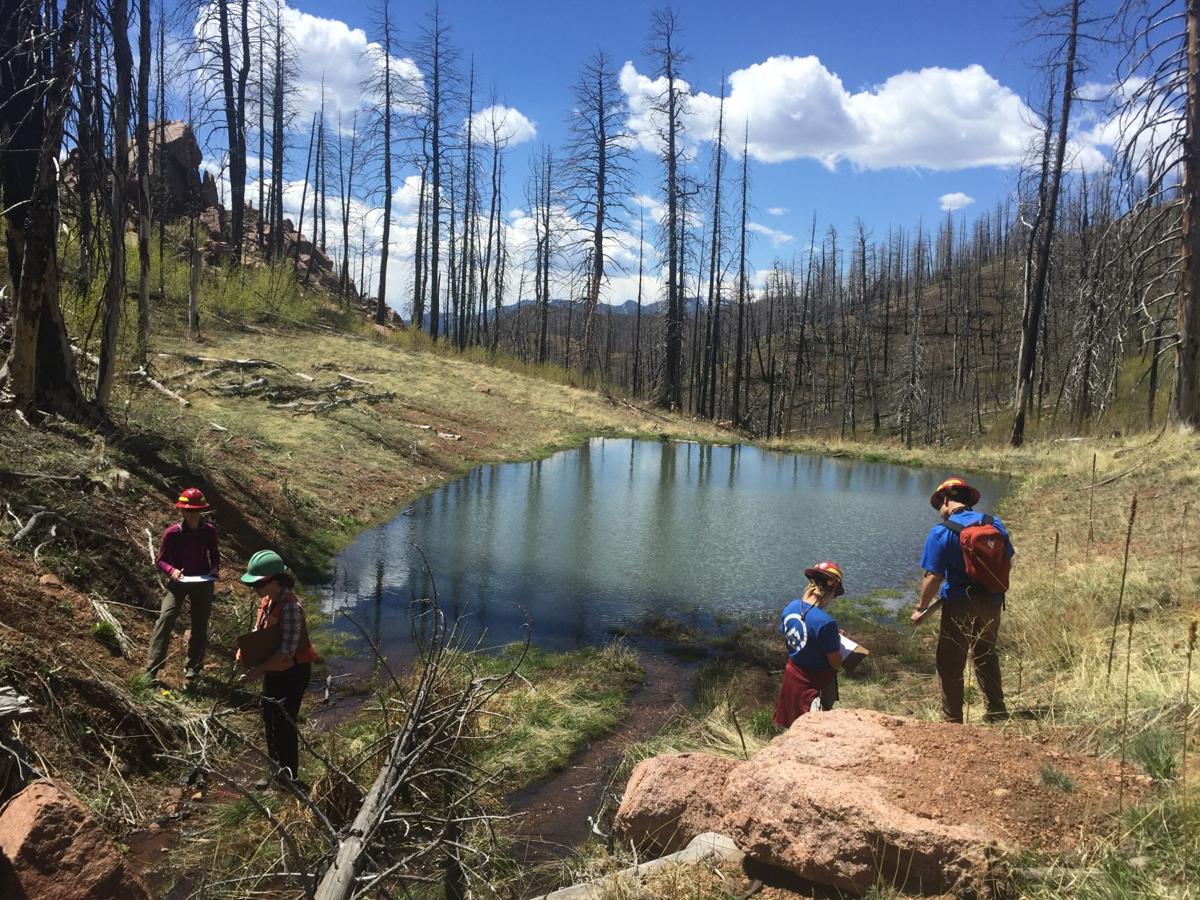 Staffers with the Rocky Mountain Field Institute and the U.S. Forest Service arrive in a valley along the Waldo Canyon fire burn scar to check on the progress of willow trees they planted in 2016. (Photo by Seth Boster, The Gazette)

They are quiet, focused intently on the job in this remote pocket of the Pike National Forest, this area where signs of death are everywhere - from the bloody deer leg on the steep slope to the valley below, where the black and naked trunks of ponderosa pine and Douglas fir still standing sway soundlessly with the wind. Most of the once proud conifers lay flat on the scorched earth.

Five years after the Waldo Canyon fire, there are other signs, too. And that is why Jennifer Peterson has come here along with colleagues from the Rocky Mountain Field Institute, the local nonprofit that has helped the U.S. Forest Service restore some of the 18,000 acres eaten by that historic blaze. The task on this day is to count the 900 willow trees planted a summer ago, to check on their progress.

The Forest Service picked this valley as a place to send heavy equipment and fight against the flooding that caused havoc below in the months after the fire. Five years later, the images of cars floating away in Manitou Springs remain unforgettable. Here in this sparse forest, water runs controlled thanks to those excavators, which stacked logs to form dams and sculpted the channel, filled with flow-slowing objects such as rocks and charred branches.

And all along it, willows were planted with the design of further stabilizing the banks. Also, the willows could provide shade. Perhaps with cooler waters, plant and animal habitats will make a suitable home again.

Peterson considers herself and others on this day "like proud parents." They were here exactly a year before with the willows after a four-month growing process: Seedlings were sent to a Nebraska nursery, which used a special mix of dirt that would make the young trees strong - strong enough, perhaps, to grow happily in the burn scar's ruined soil.

"We nurtured them for a while, sent them off, wished them luck," Peterson says, "and now we're here to see them flourish."

The Forest Service's Leah Shipstead excitedly remarks from across the creek: "Yay! This one's flowering! It's budding!"

The hydrologist based in Colorado Springs calls this "a pilot site" - the beginning stage for a recovery tactic that could work at riparian areas across the scar. Along with the 2,000 willows planted last month in Waldo Canyon itself, thousands more seedlings could be spread in the barren landscape beyond.

The site showcases other revegetation trends across the scar: the erosion-mitigating grasses that RMFI planted over wiped-out hillsides, accompanied by the Forest Service's dump of mulch from a helicopter. And Shipstead expects other human action here: biocontrol by releasing bugs which crave the invasive weeds that took root after the fire.

The group steps over the plant henchmen remaining - the spiky thistle and fuzzy mullien. They continue their willow count silently, nervously, it seems.

Shipstead comes to a finger-length sprout, unsure of its fate. She puzzles over it for a moment before coming to a decision: "I'm not calling it dead yet."

Five years after the devastation, land managers maintain a hopeful narrative. The Forest Service calls the burn scar 70 percent revegetated - a figure that does not allude to the return of the previous conifer-covered state, but to a transformed one.

The area is taking on a look it likely had centuries ago, says Pikes Peak District Ranger Oscar Martinez. Mother Nature has "reset the clock," he says, by pulling up the aspens that long lay dormant beneath the now-destroyed pines and firs that dominated for generations in forest time. Also covering the slopes now are tangles of scrub oak; they, like aspens, were eager to make their presence known soon after the conifers departed.

But locals have endeavored to bring back the dense green scene they recall, most fondly from their days of hiking the Waldo Canyon trail, super popular before its closure in the fire's wake. From 2013 to 2016 the Colorado Springs Office of Emergency Management tallied 94,730 volunteer hours from individuals who, among other recovery tasks, spread conifer seedlings. The Forest Service reports overseeing the planting of 60,000 conifers across the scar.

And all those attempts could very well prove futile. What's certain is the trees grow slow, too slow for those volunteer adults to see them stand tall in their lifetimes.

"There are questions as to whether or not they will ever come back," says Melanie Vanderhoof, the scientist with the U.S. Geological Service who has been tracking the scar's revegetation from annual satellite imagery.

A fire of Waldo Canyon's magnitude heats the ground to a point of hydrophobicity, where instead of water being absorbed, it is repelled. Further complicating the conifers' return is the forest's unique soil - "calling it a soil is kind of a generous term," Martinez says. Conservationists call Pikes Peak granite "kitty litter," for its pebbly, porous condition, which rain had no problem moving in the days after the burn, washing the sediment into the canyon and piling it up to heights of grown men.

That phenomenon made portions of the Waldo trail disappear along its 7-mile loop. The Forest Service continues to take questions as to when the trail will reopen, and land managers say people should refine their questions, considering the trail no longer really exists. Realignment seems more than likely.

"The question is where will it be, if there will ever be a trail in there," Martinez says.

Serious conversations about reintroducing recreation have yet to be had. The management plan for the Pike National Forest is due sometime between 2018 and 2020, and that, Martinez says, would identify areas where a trail is feasible.

Susan Davies with the Trails and Open Space Coalition understands the Forest Service's concerns - the dangers of flash floods and dead trees that could fall on heads at any moment. "It is the five-year anniversary" of the fire, she says, "and I think it would be great if the Forest Service were willing to put together a timeline, or even state a goal of when we might be able to start a public process. Could we at least start a conversation?"

A single trail detracts from the larger picture Martinez has in mind. "I tend to look at things holistically," he says.

For all the talk of the trail, he notices how little discussion there is regarding the fundamental reason for its ravaged state, and that of the entire forest that is no more.

While hikers enjoyed the vast greenness, perhaps they mistook that for healthy. Perhaps they didn't consider how the density could spell something ugly, how something like a spark from a cigarette or campfire could reach a brush and make it flare, how a dangling branch could catch the flame and send it to the top of one tree, then the top of all the others. (The only certainty to this day about the fire's cause is that it wasn't lightning.)

Perhaps previous controlled tree felling could have prevented this, Martinez says. What he knows for sure is that in 2012, in that summer of drought, the conditions were perfect: the humidity, the wind. "On top of that, we had the fuel load," he says. "There were areas that did not have treatments for a long, long time."

The Waldo Canyon fire, experts say, is what happens when we continue our modern trend of suppression. In part because of more residences in the wild, we've stamped out fires rather than control them to decrease fuel loads.

"That has altered our forests and left them overly dense," says Lisa Mason with the Colorado State Forest Service. "Now we're seeing bigger fires, hotter fires. The risk has increased."

The risk grows as we continue to build homes on land that has long been at Mother Nature's mercy. According to the State Forest Service, the wildland-urban interface totals 6.6 million acres across the state, hosting a human population that has more than doubled since 2000.

And the threat is compounded in the face of global warming, experts say. They expect conditions that led to the Waldo Canyon fire to be more common in the coming years.

"If the climate patterns we're seeing continue and the wildfire patterns continue as they have for the last few decades, we can expect to see an increase in the number of wildfires and also in the severity of wildfires," Mason says.

In the meantime, local land managers are focused on reducing severity. Efforts like the Upper Monument Creek project, which the Forest Service announced last month, take cues from the Waldo Canyon fire. It focuses on 31,700 acres along Rampart Range where trees will come down by machine or prescribed burn.

"What Upper Monument does is, it acknowledges we're gonna have fires," Martinez says.

Back at the recovery site, the willow count continues. Reflecting on the restoration here and at areas across the scar going forward, RMFI's Peterson wonders about human's role. "We can jump-start the process," she says, "but nature is smarter and stronger. Nature will always find a way."

Nature is finding a way here. Some plants appear to be nibbled by deer or elk. Butterflies flutter with the hummingbirds through thickets of aspen, emerging between decaying trunks. Among the destruction, the Forest Service's Shipstead looks on the bright side: "I see this, the whole scar, becoming a destination for people looking for fall colors," she says.

During her search for growing willows, Shipstead stops at a stone. She turns it over to find a black spot - a caddis fly beside the egg from which it hatched. "Soon," she says, "it'll grow wings."