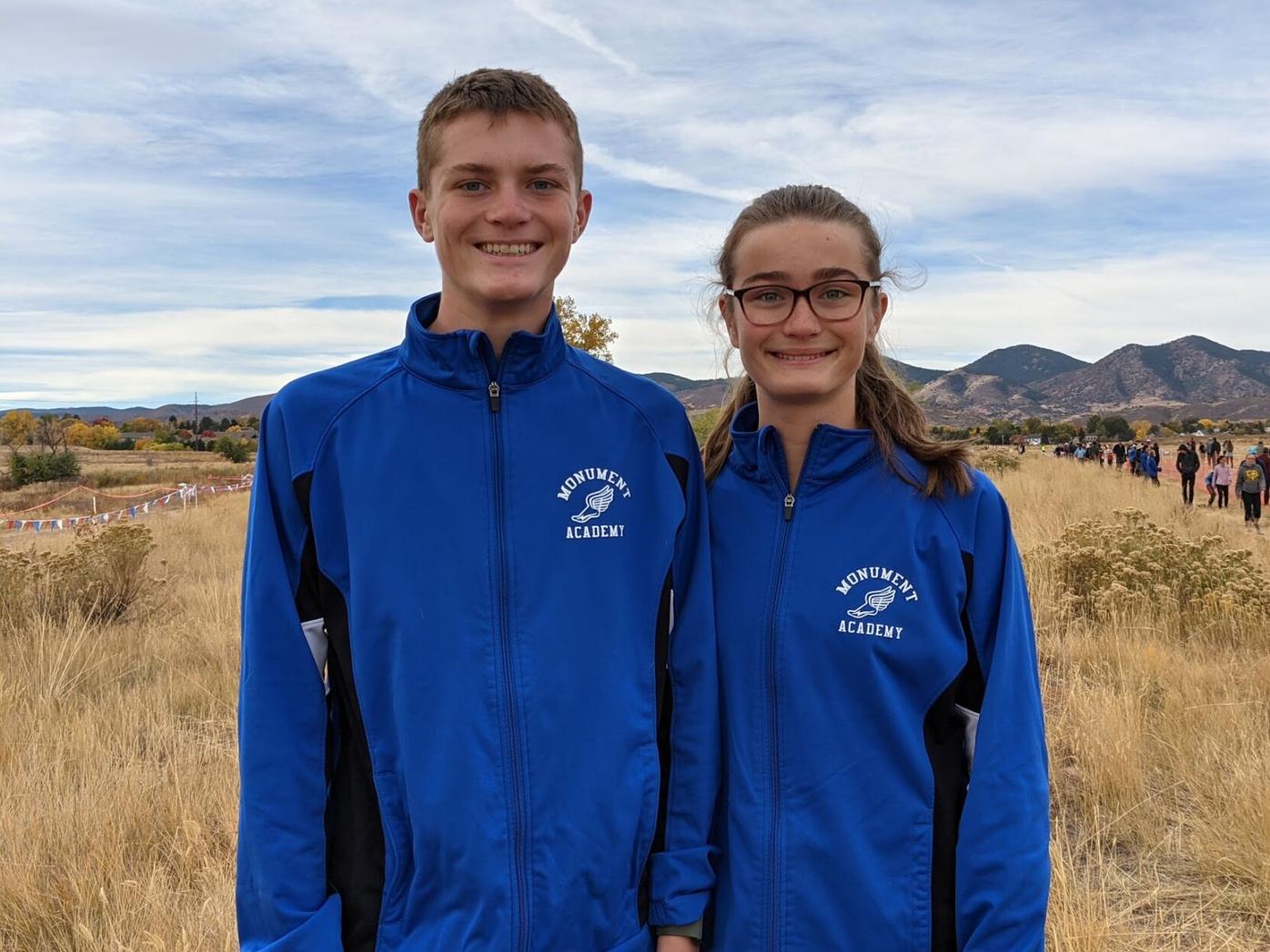 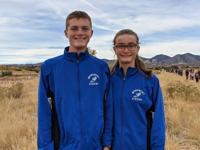 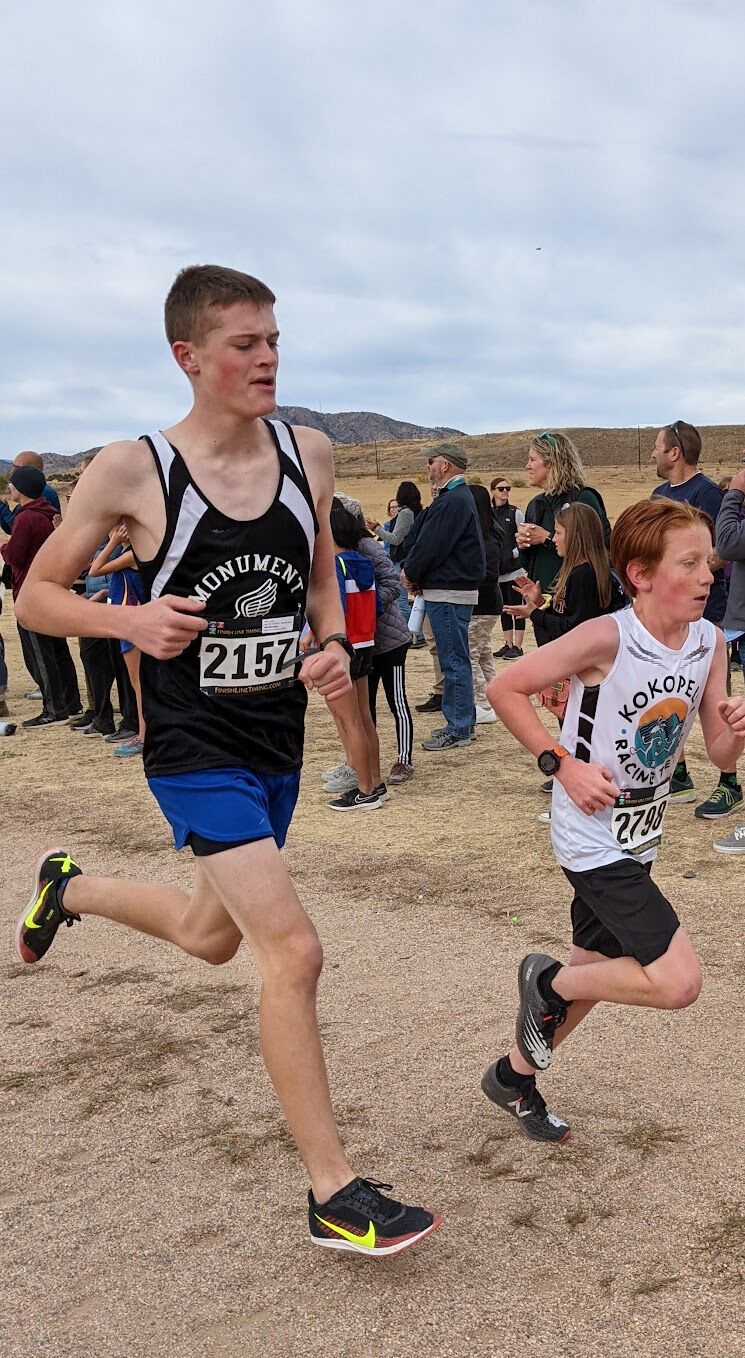 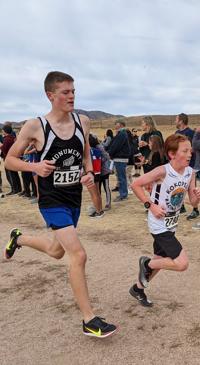 Jake Bossinger, left, an eighth grader at Monument Academy, competes in a recent race. With his finishes throughout the cross country season, Bossinger has been among the Top 4 in his league. 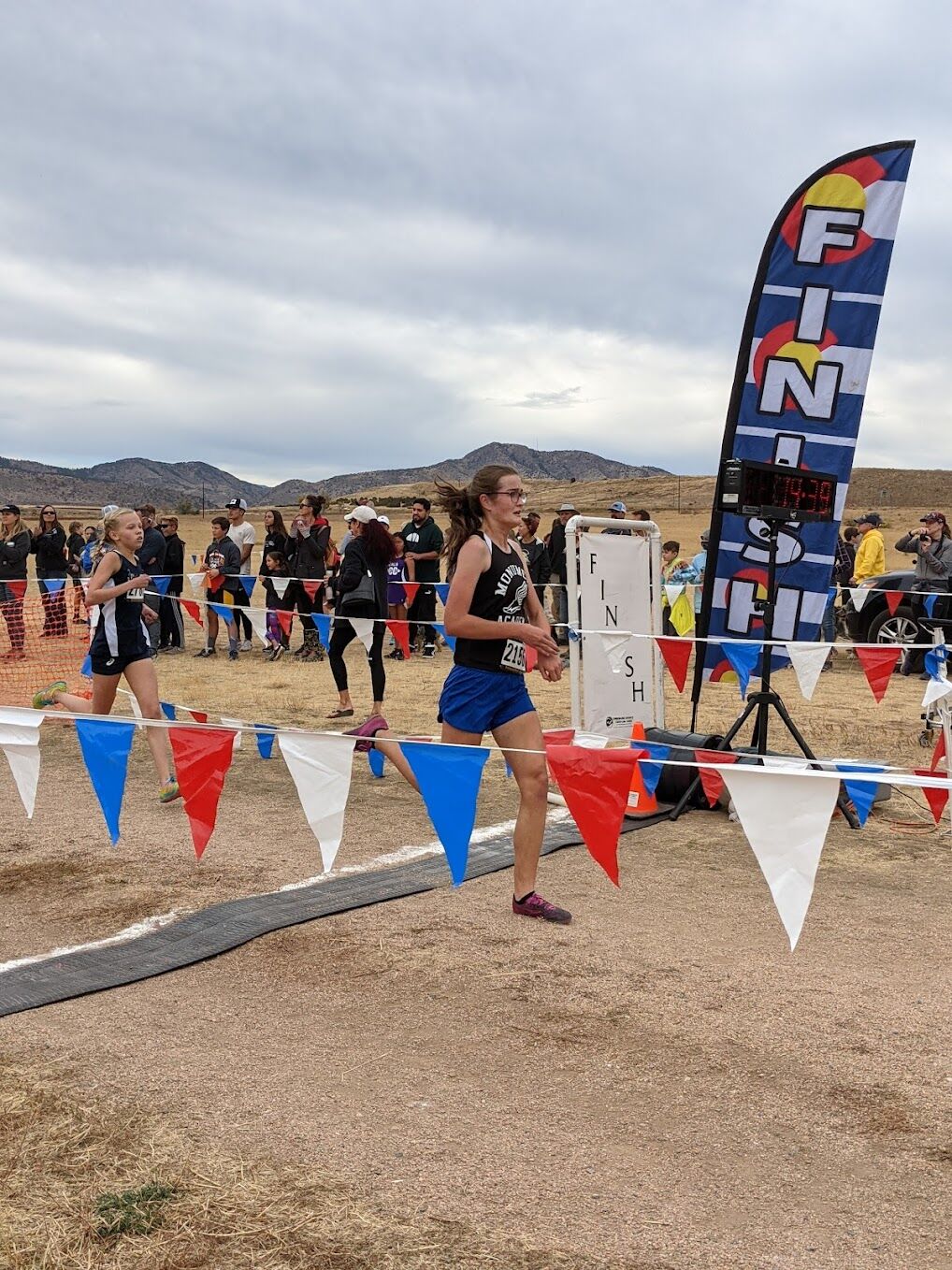 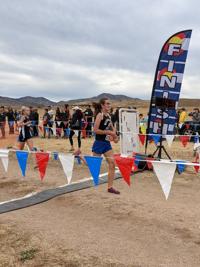 Annaliese Bossinger, an eighth grader at Monument Academy, crosses the finish line of a recent cross country race. She has consistently led her league this season.

Jake Bossinger, left, an eighth grader at Monument Academy, competes in a recent race. With his finishes throughout the cross country season, Bossinger has been among the Top 4 in his league.

Annaliese Bossinger, an eighth grader at Monument Academy, crosses the finish line of a recent cross country race. She has consistently led her league this season.

MONUMENT • When it comes to running sports, a pair of siblings attending Monument Academy are making an impact.

Fraternal twins Annaliese Bossinger, and her brother Jake Bossinger, both 14, not only share a birthday, they also share a love for sports.

Both eighth graders at Monument Academy, the pair have set new school records in both track and cross country.

Annaliese ranks first in her league on a regular basis, while Jake’s finishes have allowed him to challenge the top four places of his league.

Although running sports are their bedrock, Jake Bossinger also plays football and basketball, while Annaliese also plays volleyball and hoops.

“Running is a great foundation for these sports and has taught them the importance of hard work, discipline and being a good teammate,” said Beth Bossinger, the twins’ mother.

Having a twin to train and compete with has been one facet to Annaliese and Jakes’ early success, but their bond between goes beyond training.

“It’s fun having a twin in the same sport as me,” Annaliese said. “We are able to train together, push each other, cheer for each other and compete against each other.”

The sister said the pair run 5K events together, and while distance running can get boring, it is nice having someone to run beside. Jake Bossinger agreed having a partner on long runs is beneficial.

“I love it,” the brother said. “Keep in mind, that’s all I’ve ever known. I don’t know what it’s like to not have a twin with me.”

Annaliese feels running is an enjoyable activity and not necessarily a competition, so when she trains or is in a race, she is just having fun, she said. She said it’s that attitude that helps her excel at running sports. During the season, she runs five or six days a week. When she is not in season, she tries to run four or five days a week, and occasionally does some cross training activities, like hiking, biking and weight training, with her brother.

Jake said his willingness to push and commitment to give everything he has each time is what has led to his success so far. The pair usually trains with long runs, tempo runs, hill workouts and speed work on the track. He als cross trains during the football and basketball seasons.

The twins’ preparation for a cross country race is also mental, they said. Both incorporate visualization — going over the course in their heads, thinking about how and where each wants to finish, when to make a move to advance and when to push hard. In track, Jake said he’ll think about his handoffs and how early he can start sprinting to finish strong.

However, it’s the feeling of accomplishment each of the twins loves most about running sports.

“I love how good I feel when I’m finished running,” Annaliese said. “I feel like I’ve done something good for my health both physically and mentally. It’s a really good feeling and a sense of accomplishment.”

The brother and sister were in first or second grade when their parents noticed that running or any sports might be good for them, Beth Bossinger said. They noticed Jake was super-competitive, and saw that his older brother is also a good runner. Annaliese decided to join in and found she enjoyed it, as well. Both competed with Landsharks in elementary school, which their mother feels is where they truly found a love for running.

“We are equally proud of how they are as teammates,” Beth Bossinger said. “They work hard, support their peers, respect their coaches and try to have fun at the same time. Seeing them grow and develop as runners, students in the classroom and teammates in the various sports they play has been amazing. They are fun to watch.”

With plenty of years of preps sports still in front of them, the brother and sister’s goals for the near future appear to be clear. Annaliese wants to improve herself and get better each time she performs to constantly set and achieve her own goals, she said.

“My dream is to be a part of a championship team in cross country and track, as well as in the other sports I play,” she said.

Jake aspires to continue playing in multiple sports throughout middle and high school. He looks to continue to train and develop to make varsity rosters and compete at a high level, he said.

“I love challenges,” he said. “I really do love school and sports. I hope to continue to participate in high school sports and hopefully win a championship in one or more of the sports I play.”