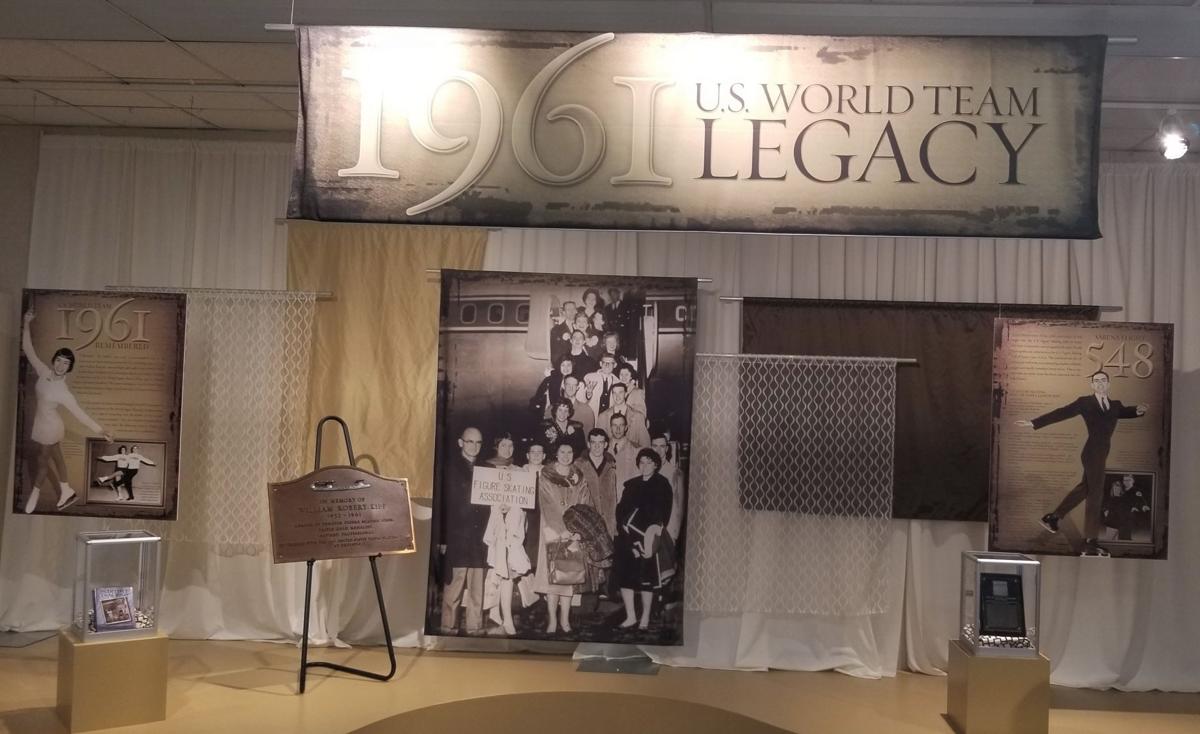 A tribute to the 1961 U.S. Figure Skating team that perished in a plane crash that year is on display at the World Figure Skating Museum, located a short walk from The Broadmoor.

A tribute to the 1961 U.S. Figure Skating team that perished in a plane crash that year is on display at the World Figure Skating Museum, located a short walk from The Broadmoor.

The helicopter crash that claimed the life of former Los Angeles Lakers player Kobe Bryant and eight others on Jan. 26 brought to mind another aircraft disaster that still hits close to home.

All 72 people on board died, as well as one person on the ground, as a result of the Boeing 707 going down on approach.

Among those who lost their lives that day was William Kipp, the coach of future Olympic Gold medalist Peggy Fleming. Kipp was among the 16 skating officials and family members accompanying the team.

I spoke with Fleming last week about that crash — she was 12 years old when it happened — and how it affected her and the rest of the American figure skating community.

“When you’re 12 you can’t really compute what happened,” Fleming told me from her Denver-area home. “But we all knew what losing the coaches meant to U.S. Figure Skating. They were the best coaches in the country, and suddenly we all had to find other coaches to replace them.”

Fleming was living and training in northern California at the time of the crash. Over the course of the next four years, she had a series of qualified coaches who helped her develop her skills. In the summer of 1965 she moved to Colorado Springs to train with Carlo Fassi at The Broadmoor Skating Club.

“Carlo had great charisma and personality,” Fleming recalled. “He wore a suit and tie every time he came to the arena. He was very serious and he knew what it would take for us to compete with the skaters in Europe. He was a former champion and a successful coach before coming to The Broadmoor.”

Fassi’s coaching style and personality matched Fleming’s desire to be the best. She won her first World Championship in Davos, Switzerland, in 1966. She followed that up with World Championships in 1967 (Vienna, Austria) and 1968 (Geneva, Switzerland) before winning the Gold medal at the 1968 Olympics in Grenoble, France.

Fleming and Fassi (who died in 1997), more so than any other combination, put American figure skating back on the world map. In 1976, Dorothy Hamill, training under Fassi out of Denver, won the Gold medal at the Innsbruck, Austria, Olympic Games.

Fleming said she often thinks about how powerful the U.S. Figure Skating team might have been had that terrible plane crash never occurred.

“Those figure skaters were going to be my role models, and that was taken away from us as well,” she said. “There was this great gap that nobody could fill.”

If you have the time, I highly suggest you visit the World Figure Skating Museum near The Broadmoor. There is an amazing tribute to that 1961 team.

Scholdan was considered one of the best coaches in the world. He arrived in Colorado Springs in the summer of 1945 as the lead man for The Broadmoor Skating Club. Already a world-class coach, Scholdan attracted many national and international skaters who came here to train under him.

Eight individuals on that 1961 U.S. Figure Skating team were members of The Broadmoor Skating Club; Scholdan (coach) and his son, Jimmy, Stephanie and Sharon Westerfeld, Greg and Nathalie Kelley, and Laurie and William Hickox.

The Club created a marble memorial to the members of its club who lost their lives. It was dedicated three years to the day after the crash on Feb. 15, 1964. The Ice Palace was renamed The Broadmoor World Arena.

You can visit the memorial, which represents a skate blade and functions as a bench. It sits beside the lake in front of where the old World Arena stood. It is said that Edi Scholdan and the skaters made a habit to rest between lessons and practice sessions by the lake.

Among the skaters killed in the crash was 16-year-old Laurence Owen. She won had won the U.S. Figure Skating Championship in the ladies’ division the previous month and was featured on the Feb. 13, 1961, cover of Sports Illustrated. SI referred to her as the “… most exciting U.S. skater.”

Other notable figure skaters that lost their lives were LaBradley Long, the 1961 U.S. men’s champion, and Diane Sherbloom and Larry Pierce, the 1961 U.S. ice dancing champions.