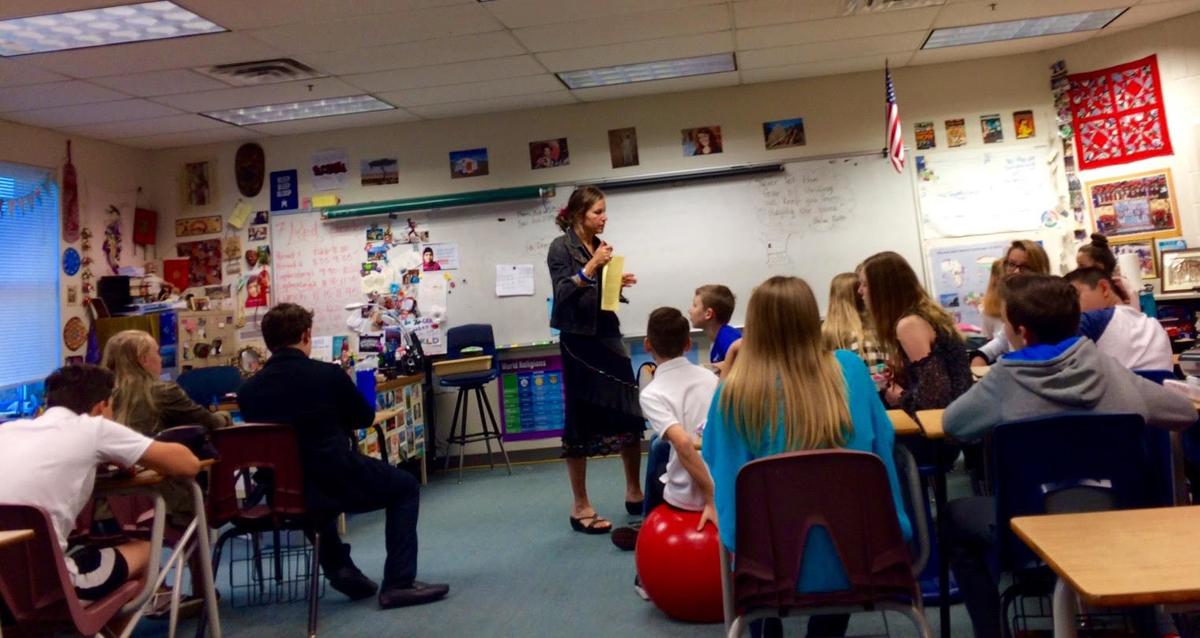 Lewis-Palmer Middle School teacher Carrie Block preps students on their assignments for an Oct. 25 “Stories Matter Gallery Walk” and reception at the school. 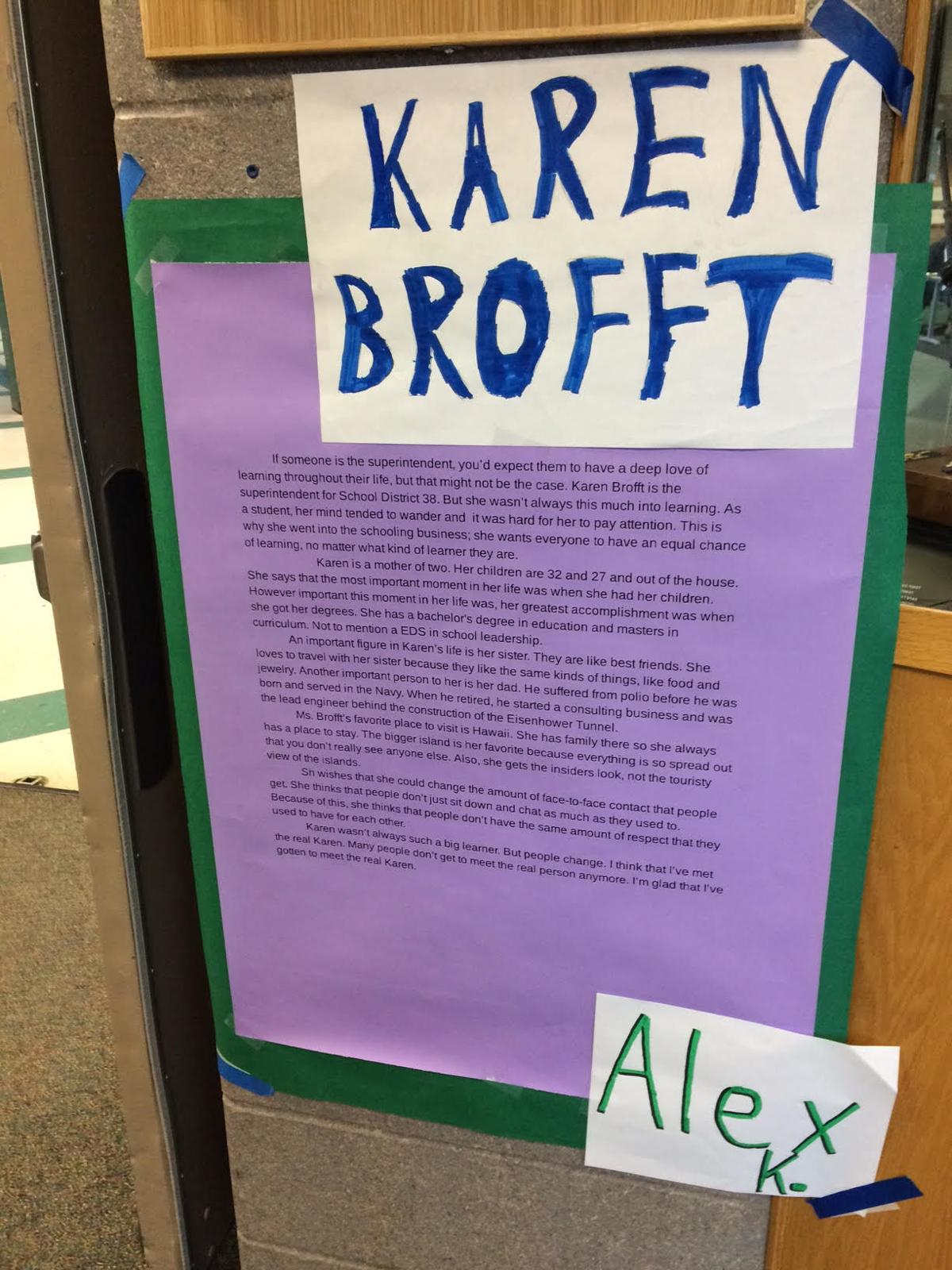 One District 38 seventh grader interviewed Lewis-Palmer Superintendent Karen Brofft as part of a multi-disciplinary project about “what connects humanity.” 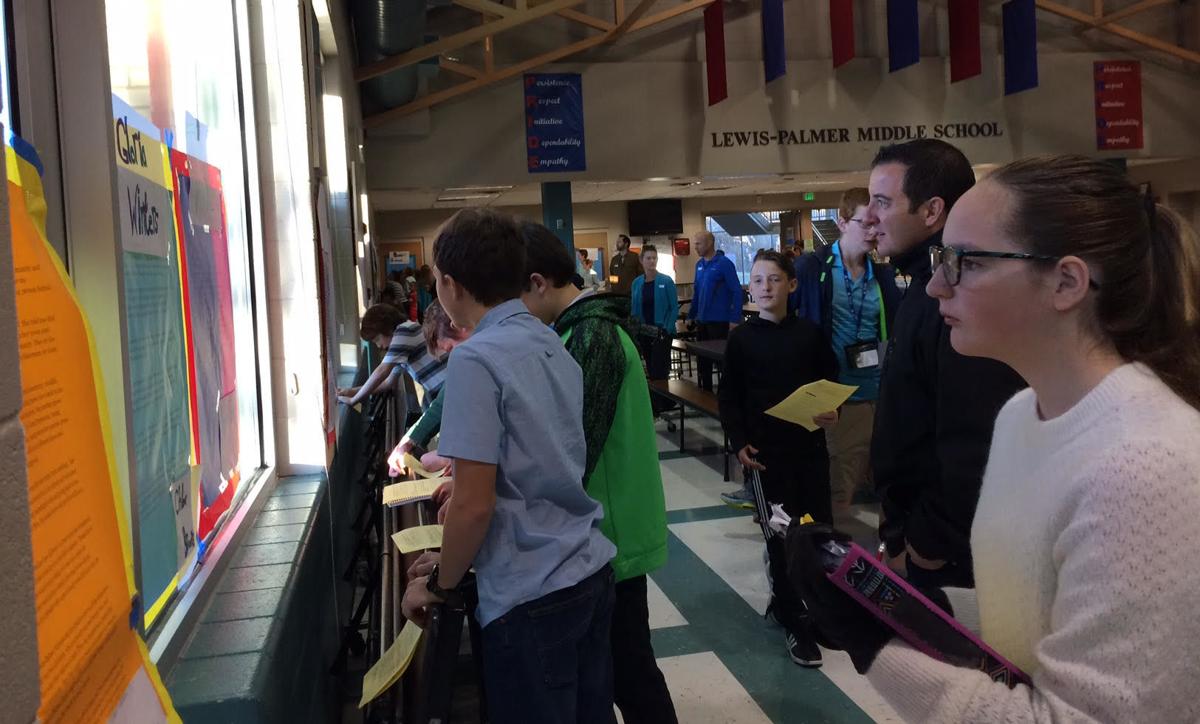 Members of the community who volunteered to be interviewed attended a museum gallery style reception Oct. 25 featuring stories written by Lewis-Palmer Middle School seventh graders. Students conversed with the adults to learn about “what connects humanity,” according to teacher Carrie Block. 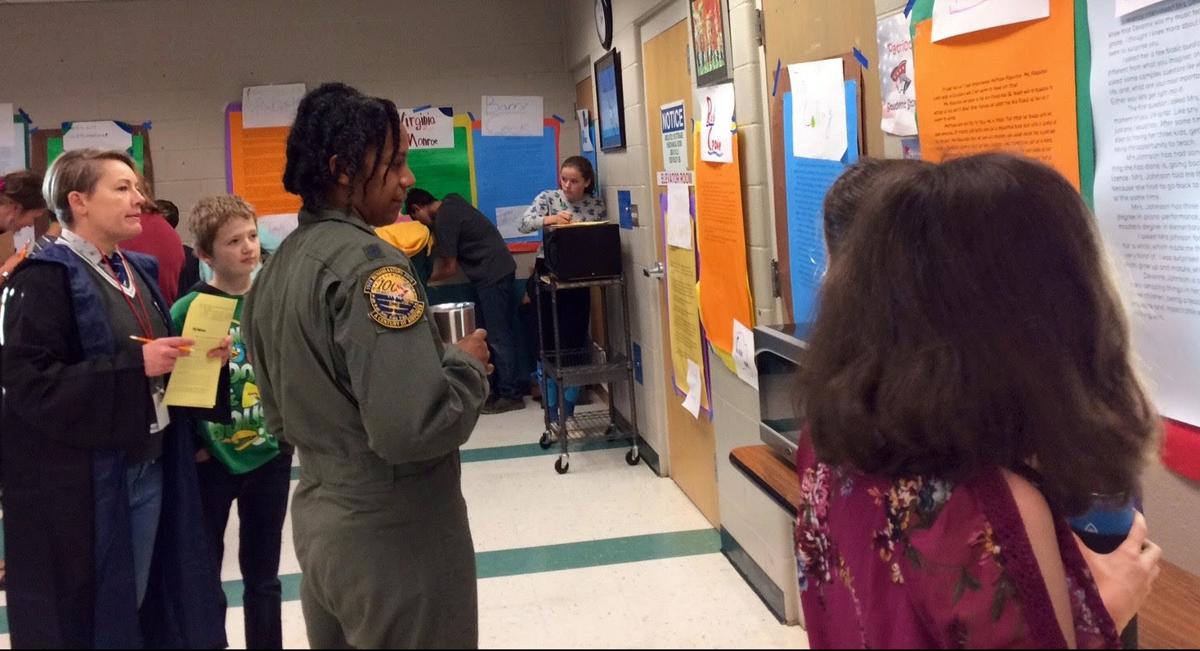 Lewis-Palmer Middle School teacher Carrie Block preps students on their assignments for an Oct. 25 “Stories Matter Gallery Walk” and reception at the school.

One District 38 seventh grader interviewed Lewis-Palmer Superintendent Karen Brofft as part of a multi-disciplinary project about “what connects humanity.”

Members of the community who volunteered to be interviewed attended a museum gallery style reception Oct. 25 featuring stories written by Lewis-Palmer Middle School seventh graders. Students conversed with the adults to learn about “what connects humanity,” according to teacher Carrie Block.

As park of a community interview project LPMS students worked on in September, Keener interviewed Brofft and shared what he learned in a written account of the interview during an Oct. 25 reception at the middle school. The seventh grader’s story reads: “If someone is the superintendent, you’d expect them to have a deep love of learning throughout their life, but that might not be the case.”

The story goes on to explain how Brofft’s attention difficulties as a child inspired her to work in education. She desired every child have an equal chance at learning, according to Keener’s recount of the interview.

Keener, along with other seventh graders at Lewis-Palmer Middle School, hosted the early morning dessert reception showcasing their stories based on the lives of the 115 community members they interviewed. The students and their subjects did not previously know each other.

The project encompassed learning across language arts and social studies disciplines. However, knowledge gained, according to some students, grew beyond what they expected. Braeden Turner interviewed a local entrepreneur whose company had failed.

“At one point, he only had $15 in the (business) bank account,” said Turner, who recalled his interviewee telling him, “You’re not gonna succeed without failing.”

“Kids are so involved in technology, this seemed like a good way to build connections (among people),” said Block, who thought encouraging students in “sharing a little bit of yourself” might push them out of their comfort zones, in a positive way.

The day of the reception, before heading down to the cafeteria at 7:30 a.m., Block gathered her students at the front of the classroom for a “Stories Rock!” cheer. During the reception, they read stories aloud and mingled with members of the community they’d interviewed. The students were instructed not to clump together and were challenged to interact with at least one adult guest.

Several students came dressed for the occasion: a few wore bow ties and patent leather flats. Jade Allen completed her ensemble with a black satin Hermione Granger robe — a character from the Harry Potter book series. Even Block’s face sported a sprinkling of gold facial glitter in honor of the event.

In the gallery, students’ stories were on display around the room. The profiles were printed in large font on poster-sized, bright butcher paper and taped up on the walls.

Susan Smith, a volunteer community member, stood along one wall reading a student’s feature on her. Smith had volunteered to be interviewed twice to give every student a chance at a one-on-one experience. Smith said she was delighted to see the student had written that Smith put her at ease after the student had felt nervous at the beginning of the interview.

Smith’s children have been students at LPMS for the last few years. “I love this whole program that they’re doing this year,” she said of the community interviews. After the September interviews, she was gratified to receive a handwritten thank you note from each student.

LPMS seventh grader Bella McNett said that to prepare for the conversations she and her classmates, “learned how to interview somebody,” and developed approximately 10 questions to ask their subjects. They then practiced on classmates before meeting with the community volunteers. McNett said she was surprised to discover her interviewee had “some really cool hobbies.” The woman had run a marathon on all seven continents.

Students were tasked with completing a reflection assignment following the project’s reception. Students milled around with their assignment sheets, taking notes. The sheets read: “Great job, seventh graders, interviewing a complete stranger and finding out some of their stories. Stories are powerful in so many ways. They teach us things, give us wisdom, (help) us find similarities in each other, and appreciate the differences as well. These stories give us laughter and we share sorrows with each other. It makes us human.”