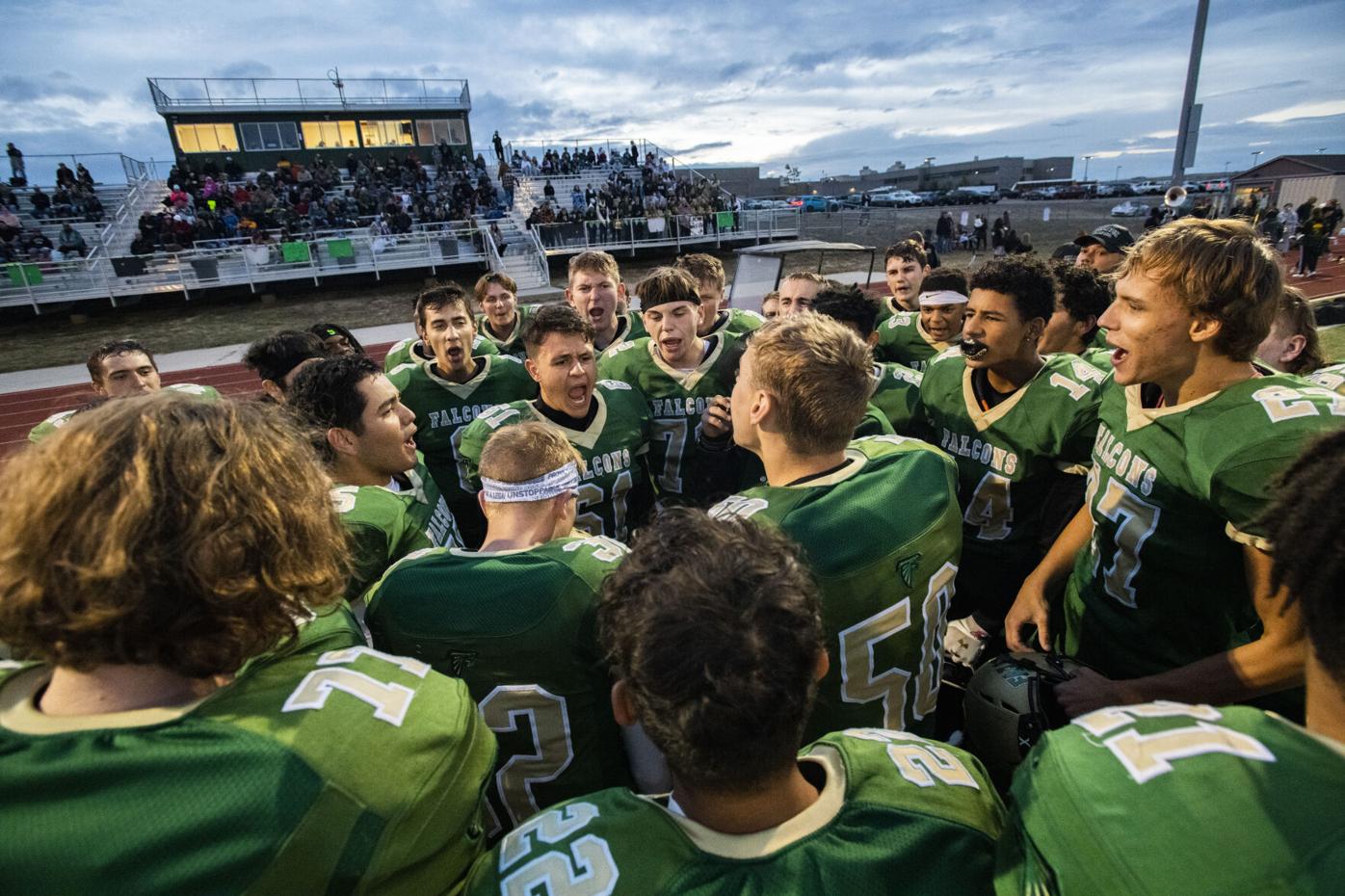 The Falcon High School football team rallies before the start of the team’s game against Liberty High School on Friday, Oct. 1, 2021, at Falcon High. The school football program was suspended to one week after an investigation into reports of serious misconduct involving some players in a hazing incident. 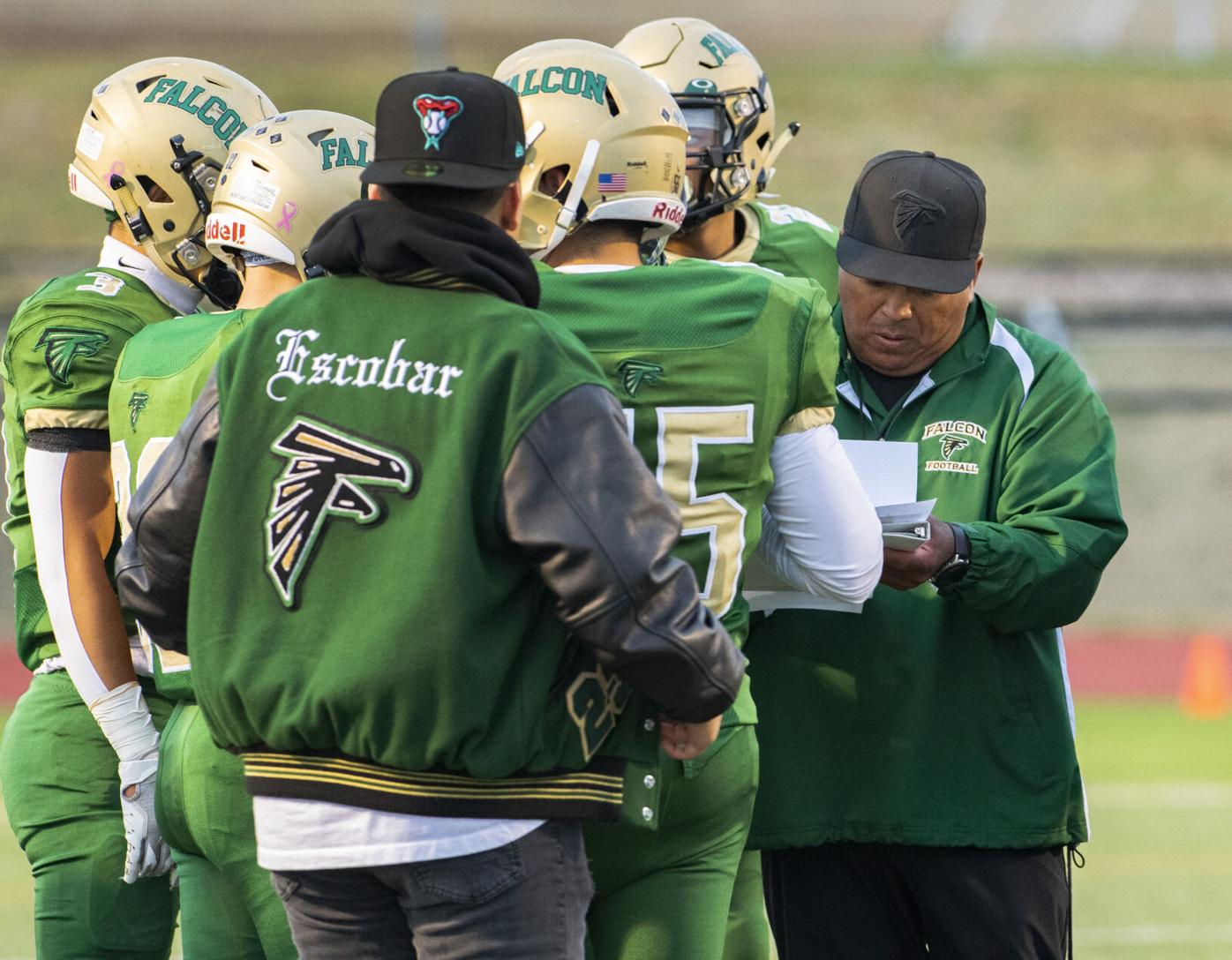 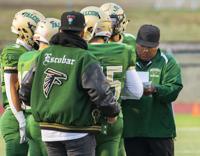 at Falcon High. The school football program was suspended to one week after an investigation into reports of serious misconduct involving some players. 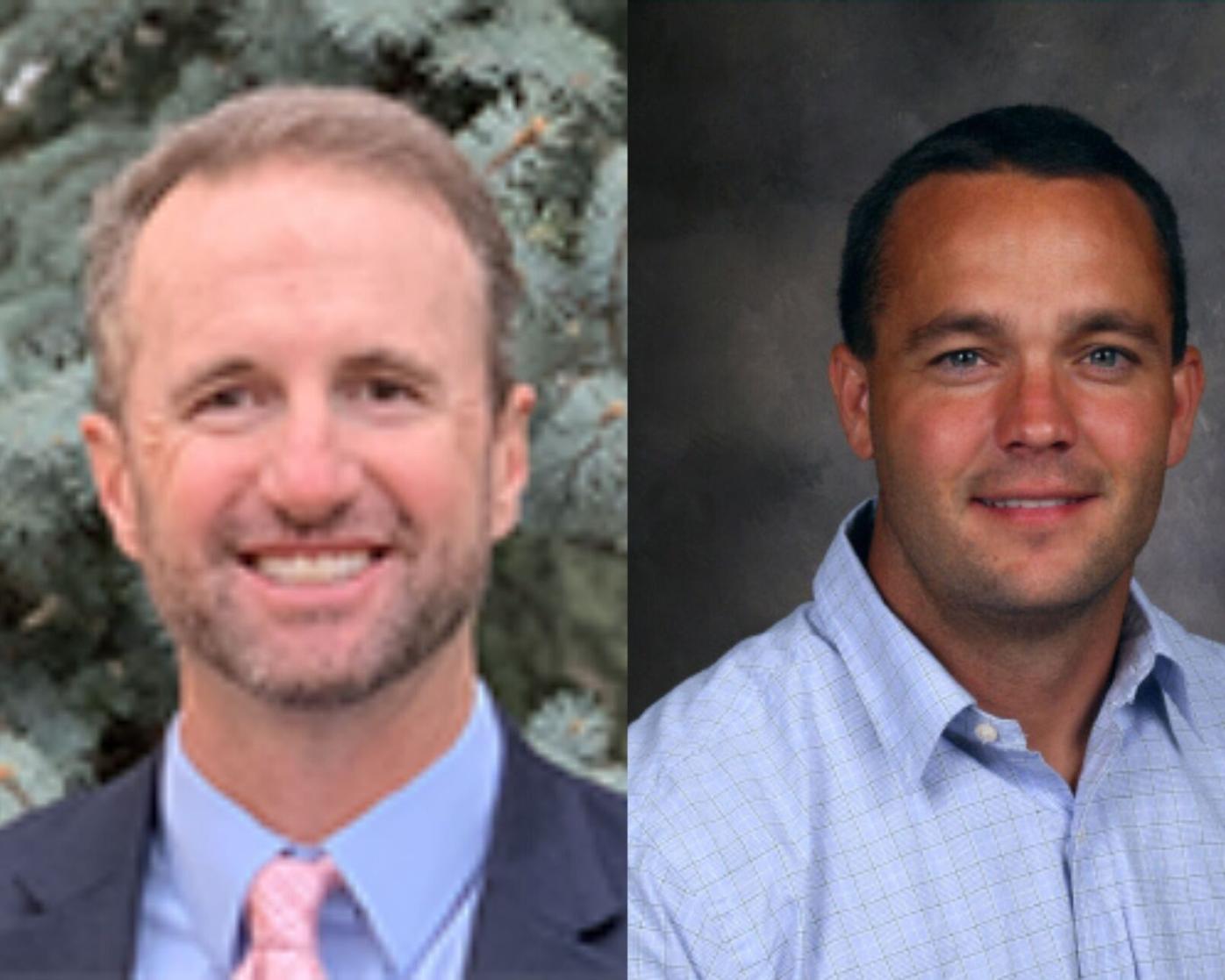 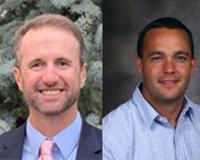 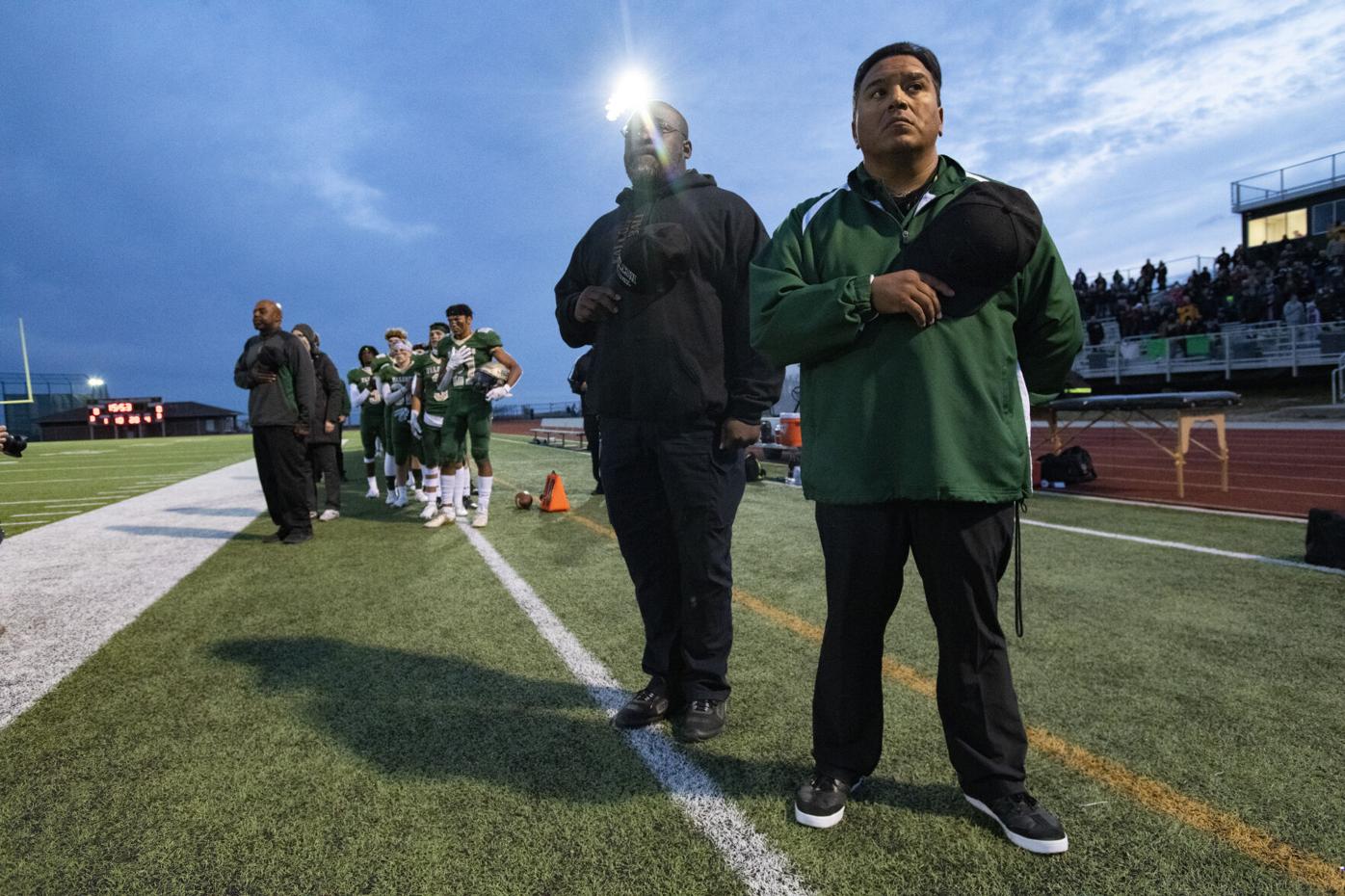 Interim head coach Josh Flores, right, stands with his Falcons team during the national anthem before their game against Liberty on Friday, Oct. 1, 2021, at Falcon High. The school football program was suspended to one week after an investigation into reports of serious misconduct involving a hazing incident.

The Falcon High School football team rallies before the start of the team’s game against Liberty High School on Friday, Oct. 1, 2021, at Falcon High. The school football program was suspended to one week after an investigation into reports of serious misconduct involving some players in a hazing incident.

Interim head coach Josh Flores, right, stands with his Falcons team during the national anthem before their game against Liberty on Friday, Oct. 1, 2021, at Falcon High. The school football program was suspended to one week after an investigation into reports of serious misconduct involving a hazing incident.

Recent cases of high school hazing in Colorado Springs, Cañon City and Littleton shed light on a phenomenon that experts say is rarely documented but could be exacerbated by a sudden return to school after the isolation teenagers faced during coronavirus quarantine.

“There’s been a real concern hazing would be amplified after coming back to in-person learning situations,” said Dr. Elizabeth Allan of the nonprofit group Stop Hazing. “The worry has been that students will feel like they’ve missed out because of COVID.”

In recent weeks, Colorado hazing allegations have led to list of firings, police investigations and team suspensions since students returned to in-person learning after a year and a half that included the isolation of online learning tied to the pandemic.

At Falcon High School outside Colorado Springs, the football team returned to the gridiron Oct. 1 after its season was interrupted by a hazing probe that El Paso County Sheriff’s Office investigators said could include “sexual misconduct.” School District 49 announced that some coaches and parents knew about the hazing incident and that many students “participated, observed, and recorded the hazing and harassment” and that silence around the incident ”created the conditions that prolonged the harassment and hazing of smaller and younger students.”

At Littleton’s Chatfield High School, the principal and athletic director quit after an alleged hazing incident involving a club baseball team for middle school students. Details of the incident haven’t been released, but some parents have called the incident “horrific.” Principal Chad Broer and Athletic Director Craig Aukland were first put on paid administrative leave by the Jefferson County School District before they stepped down. Cameron Bell, spokesperson for the district, told CBS 4 that the situation happened July 26 and involved students who had graduated from middle school and were playing for a private baseball team. Aukland was arrested on suspicion of failing to report child abuse and neglect and is awaiting a court hearing in the case.

Police this month announced there was no criminal conduct in a hazing case involving Cañon City High School’s football squad. The team had its season put on hold amid the investigation but plans to return to the field Oct. 15. Officials said the hazing violated the Colorado High School Activities Association bylaws triggering a two-game suspension for the football team.

In an interview with The Gazette, Cañon City Superintendent Adam Hartman said the incident there involved a team initiation ritual of kicking, hitting and pinning down new players, who then had ice water dumped on their heads.

“It presumably was a welcome to the team,” Hartman said, noting the district found out about the ritual Sept. 20 when a teacher overheard students talking about it at the high school.

“A teacher overheard a conversation and asked questions,” he said. “There was enough in that story to start a pre-investigation with kids.”

Because of the allegations of violence, the high school, which is required by law to report suspicions of child abuse, brought in Cañon City police investigators who grilled players to determine whether the incident crossed the line into criminal behavior. The police cleared the players, but under the rules of CHSAA, the Tigers were ordered to sit out two games as punishment for hazing.

Hazing rites have been a tradition at many schools for decades, but attitudes toward that behavior have changed in recent years and the old rituals can now carry serious consequences.

“There’s no way this is only happening here,” Hartman said. “I’m not terribly surprised to hear it’s going on in other places. It’s not good.”

The district’s transparency with parents and media is unusual in these circumstances, but it has had experience dealing with high profile situations before, as a 2015 sexting scandal resulted in a felony investigation and one-game football suspension.

Nearly half of college students hazed in high school

The most recent national statistics on hazing date back to 2008, according to the nonprofit Stop Hazing, which offers resources to schools in a bid to stamp out the rites. Stop Hazing reported that 47% of college students polled said they’d been hazed before they got to college. And those numbers may have been higher if they’d interviewed kids who did not go to college after high school, the group found.

“Often respondents say that they did the hazing because of ‘tradition’ and they think it’s going to somehow build team spirit or some kind of camaraderie,” said Allan, who is the nonprofit’s research director. “The reality is it’s abuse.”

Hazing can range from freshmen being forced to refill water bottles for the upperclassmen to forced alcohol consumption to sexual assault, which often includes attacks between boys, Allan said.

“We’ve seen sexual violent hazing for years. It really comes back to the fact that hazing is a form of abuse,” she said. “If you think about ways to humiliate and degrade someone or cause them to be fearful, using sex is a good way to do it.”

Hazing, though, often goes unreported. Some students see it as a rite of passage that allows them access to a social circle.

“Hazing is often for the purpose of inclusion whereas bullying is behavior which aims to exclude someone,” explains Allan.

Colorado officials say they don’t know how often hazing occurs at schools. While other forms of school violence are closely tracked, hazing isn’t.

Colorado’s Attorney General office operates Safe2Tell, which was started to help quell violence and misbehavior at schools. The program, which allows students to anonymously report concerns, tracks items from many threatened assaults to suicidal ideation. But officials there said they don’t have a category that would allow them to asses hazing. Instead, reports of hazing to Safe2Tell would be counted as “bullying.”

Of nearly 21,000 tips received by Safe2Tell last year, 1,286 of those were for bullying, making it the third most common complaint after suicide threats and reports of drug use. But officials say how much of the bullying is actual hazing is unknown.

Hazing itself is a divisive issue even for parents, with some calling it a harmless but treasured tradition, while others see it as a dangerous trend.

“This is a small town, and there’s a good old boys club here,” said one Cañon City High School parent, who asked to go unnamed for fear there would be retribution against her child. She said the football team should have faced stiffer consequences for mistreating its most vulnerable students.

“We will continue to have this ridiculous situation if we don’t show these people that there is zero tolerance (for hazing),” she said.

But in the same small town, others say the flap over the football rite was overblown.

Aliah Mick, whose son is a senior on the Cañon City team, said the hazing was harmless fun that could be milder than what happened in the past.

“To each person who thinks poorly of these athletes, I ask you to think back to your high school years and what went on a decade ago or even two decades ago,” Mick said.

Hartman, the interim Cañon City Schools superintendent, said his priority was making sure the students who suffered through the hazing had the help they needed.

“For a young person to come forward and say ‘this is something I experienced and I didn’t like that,’ is a risky thing to experience,” he said. “There’s potential for consequence that person might be seen as a snitch or a whistleblower...”

While officials in Cañon City were open about in the football team incident, in Littleton the alleged hazing has been concealed behind a curtain of secrecy.

Officials have said the Chatfield High School incident involved incoming freshman and wasn’t tied to a school-sponsored activity. The acknowledgment that it was tied to school officials, though, came in an email to parents announcing the resignations of two Chatfield High leaders.

Shellina Weddel, mother of a sophomore, said Chatfield is a great school, but she wants more transparency about what happened this summer.

“It’s a very odd situation, and as parents, if something like this is going on, we should be informed of it by the school and we never were,” Weddel told the Gazette. “Especially if it’s a hazing issue or bullying issue you can give details without saying who was involved so that we can talk with our kids, find out what’s going on and hopefully put a stop to whatever may be going on.”

But Allan with Stop Hazing said hazing rites have traditionally come with a cloud of secrecy.

She said hazing isn’t talked about but has been accepted in American culture for decades. Further, any data collected about hazing is skewed because parents, coaches and students are afraid to talk about it for fear of retribution.

She would like for schools to outlaw hazing rituals, but adds that a zero tolerance policy in schools is not enough. Educating kids to give them the power to act once they’re being asked to do something that makes them uncomfortable is key. So is punishing adults who should know better for allowing hazing to happen in the first place.

“You have to have a strong commitment to doing what’s right, to holding people accountable when they break the rules and don’t uphold community standards,” Allan said.

In Cañon City, Mick is ready to move past the high school’s hazing controversy. With so many high school rituals sacrificed over the past two years due to the pandemic, students like her son need a dose of normalcy.

“They’re all ready to go,” she said. “They’ve already lost so much to COVID.”