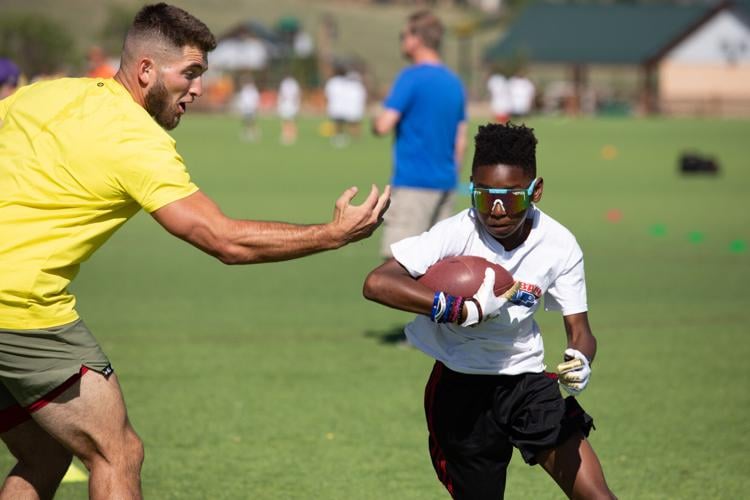 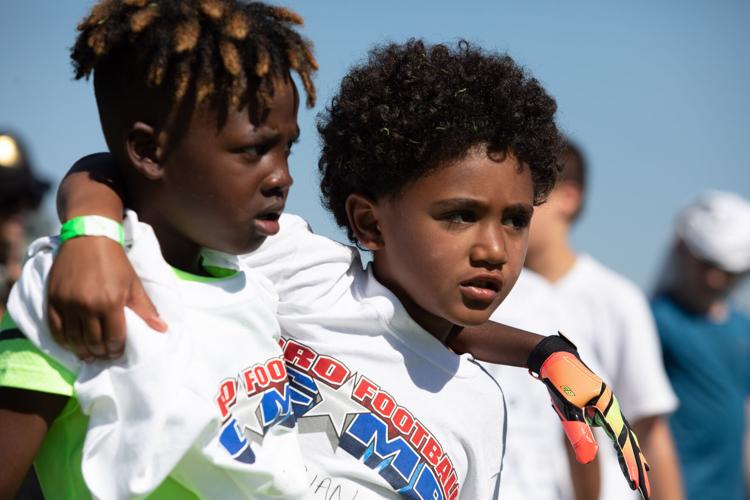 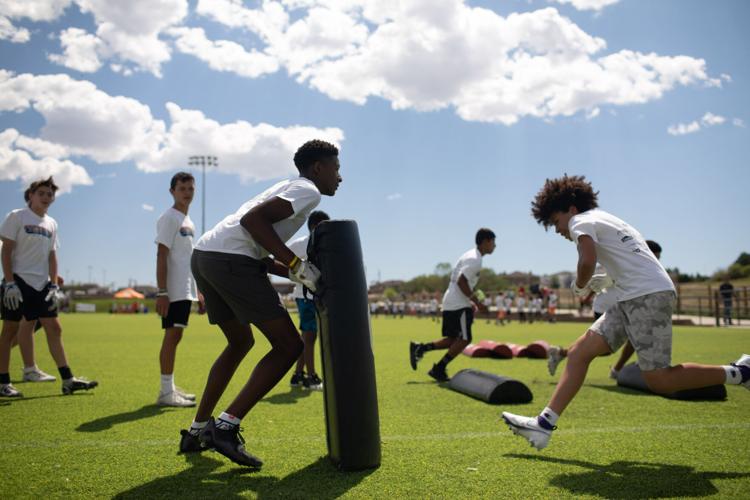 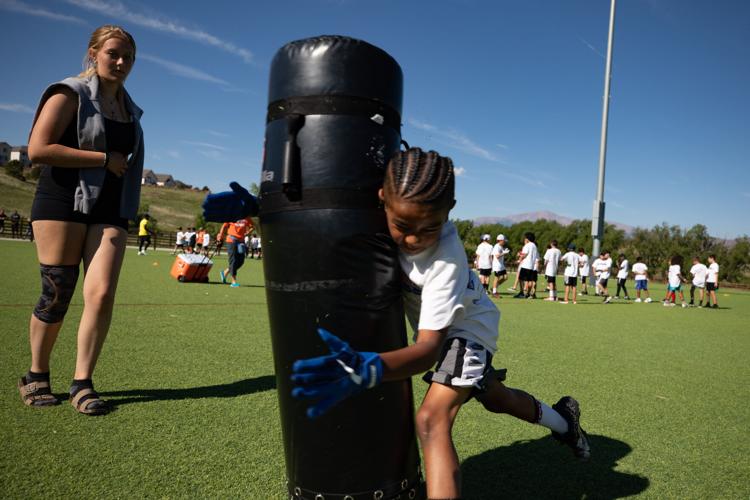 A young camper makes a tackle on a dummy Wednesday, July 13 during the Pro Football Camp at John Venezia Community Park.

JoJo Domann caught a football from one of his many young admirers at the Pro Football Camp last week, cradled his hands around it, held it over his head and spun it right back.

In doing so, the versatile player who starred at multiple positions at Pine Creek before becoming a defensive mainstay for Nebraska, revealed his latest project as he approaches his first NFL camp as an undrafted free agent with the Indianapolis Colts.

“About two months ago I committed myself to long snapping,” Domann said from the camp held at John Venezia Park on the north side of Colorado Springs. “It’s the only position I’ve never played on a football field in my career is long snapper. Now, here I am as a professional athlete learning the one position I’ve yet to play.”

The decision was a lesson in pragmatism. His goal is to make the active roster as a special teams player who can provide depth at outside linebacker, but Domann knows the value and staying power of long snappers in the NFL. He’ll take every advantage he can get.

So during the Colts’ 10-day organized team activity he worked for 25 minutes each day with the team’s All-Pro long snapper Luke Rhodes – who is also represented by Domann’s father, NFL agent Craig Domann — to learn the fundamentals of the skill. Domann has worked at it feverishly ever since, finding himself unable to pick up a football without placing it in the two-handed position of a long snapper.

“I was throwing ducks between my legs,” Domann recalled of his first attempts. “You’ve got to slow it down and work on it in increments. It can be discouraging when you’re trying to learn a whole new skill and you’re learning from one of the best to do it. My snaps look nothing like his. He just kind of broke me down and sent me home with just a plan of keep working on it. I got a lot of good drills and techniques from him. Now I’m getting confident in it.”

Versatility has been a part of Domann’s game since he was a freshman at Pine Creek.

“His freshman year he kicked an extra point right-footed,” Eagles coach Todd Miller said. “The next time we scored a touchdown he kicked it left-footed. They both looked the same. Those types of things you just don’t see from kids.”

“They allowed me to be me,” Domann said of the Eagles coaching staff. “I have so much gratitude that they weren’t so caught up in anything else and they just allowed one of their athletes to play ball.”

He then went to Nebraska, where he earned second-team All-American honors as a senior to cap a six-year career that included two major injuries and a pandemic.

“Pine Creek was this opportunity to showcase all these tangible skills,” Domann said. “At Nebraska it took more of the intangibles. It was the behind-the-scenes work of preparing, working through injuries, coming out of my shell and becoming a leader.”

He’s applied all of that in the past few months in dealing with draft-day disappointment and then adjusting accordingly.

Projected to go anywhere from the third to fifth round after appearing in the NFL Combine, Domann’s name was never called. At the end of the sixth round he had the feeling he wasn’t going to be selected and needed to get out of the house. A few friends who had gathered for a draft party joined him in heading over to The Club at Flying Horse to play golf and find an escape for his mind.

It was there that he learned the Colts called five times in a short span to gauge his interest. With his father’s familiarity with the organization, it was a quick decision. Indianapolis wanted a contract as soon as possible, so Domann’s mother, Teddi, drove the paperwork to him and he signed while on the 10th hole at Flying Horse.

Domann — unsure if it was his age or injury history or 6-foot-1, 228-pound size that leaves him between the typical mold of outside linebacker or safety that led to the draft-day slide – now finds himself feeding on the prove-everybody-wrong instinct that comes from going undrafted, while also relishing the chance to surprise everybody.

“It serves as motivation because there’s no complacency,” he said. “My ego has nothing to attach to. I have everything to prove. I love that for me.”

For the past few months he has been training locally and in Castle Rock as he prepares to report to camp in an Indianapolis suburb on Saturday, July 23.

Last week he served as one of the “Pros” in the Pro Football Camp.

Domann’s family runs the camp and he’s been a part of it for all 17 years of its existence, first as a camper, then as a volunteer and now as one of the featured professionals.

“When life comes full circle for you,” he said, “it definitely gives you a feeling of euphoria, like, I’m right where I’m supposed to be.”