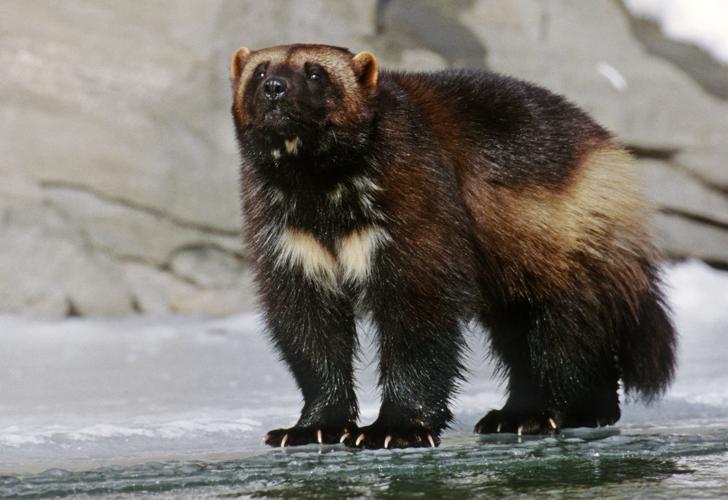 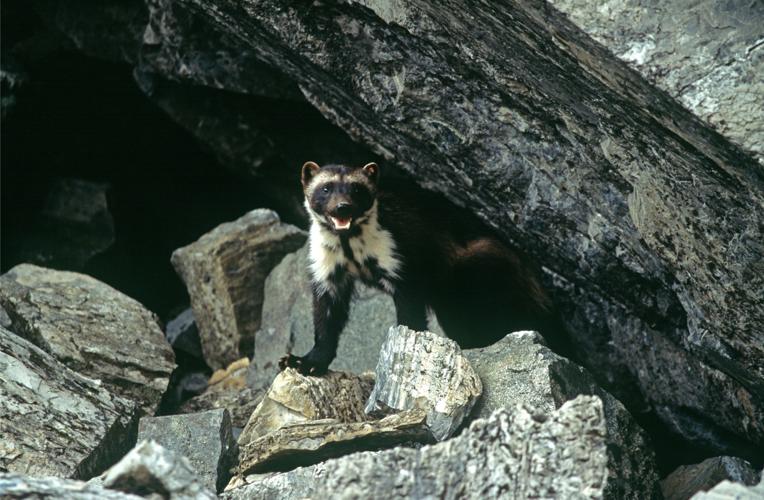 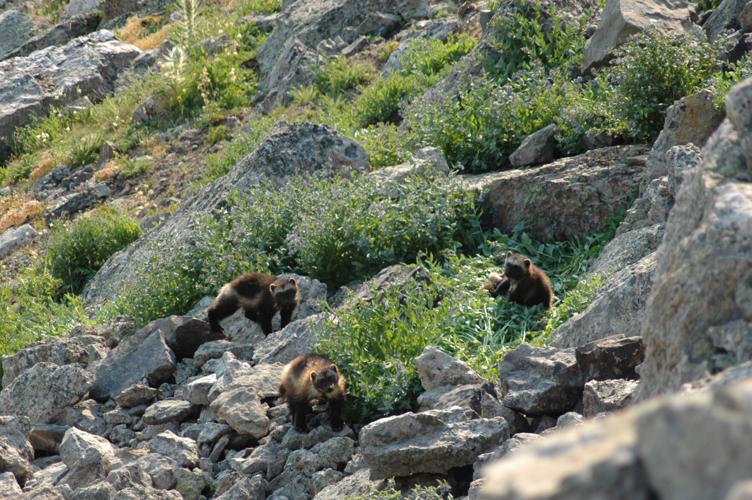 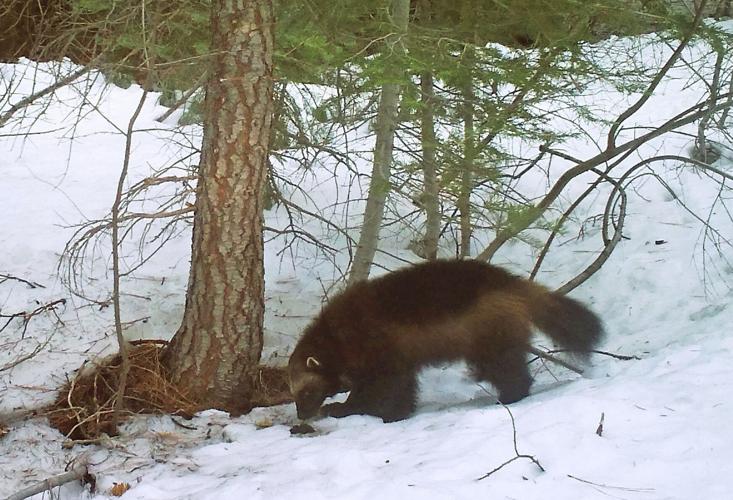 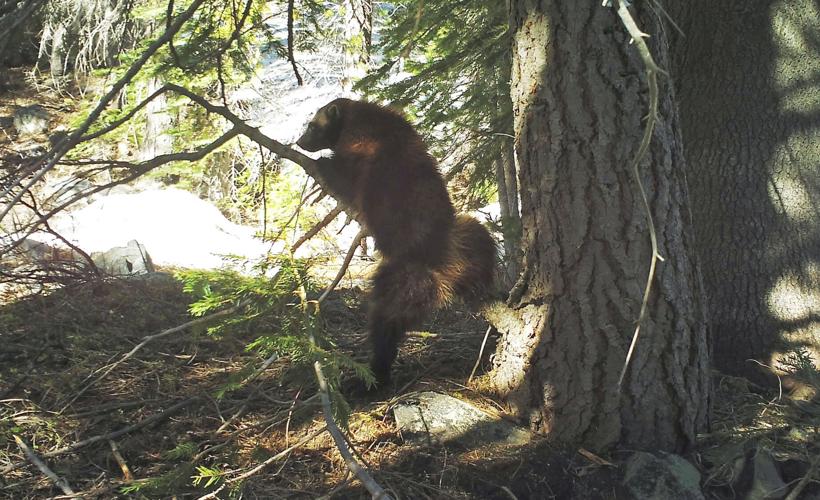 When the opportunity came in 2008, when the rare wolverine presented itself just in time for the technology to meet it, researchers in Wyoming took advantage.

M56, as he became known, was almost 2 years old and weighed a healthy 30 pounds. A tracking device was implanted into his furry underside. And off he went, his human onlookers eager to perhaps learn from the elusive, mysterious creature, whose numbers in the West were uncertain since colonizing men essentially eradicated the species around the turn of the 1900s.

“This whole community watched with bated breath,” says one of those onlookers, Rebecca Watters, representing the science-funding Wolverine Foundation. She recalled the question heard around the country:

Indeed, from his starting point near Jackson Hole, M56 took less than a month to arrive in the Centennial State, where his kind was last reported in 1919.

The venture confirmed what was believed of wolverines’ tendency to cover vast ground. Still, researchers were astonished by the speed. And more than that, they marveled at watching in real time the animal of mythological lore that had always evaded their view. (Recent estimates suggest low densities, small numbers in big places — between 250 and 350 moving across rugged, remote fringes of the Lower 48 states.)

M56 had managed to cross the Red Desert, the flatland separating Colorado and Wyoming and unsuitable for the alpine-dwelling omnivore. He wandered through the forests west of Fort Collins, roamed the northern boundaries of Rocky Mountain National Park and toured the Collegiate Peaks southeast of Leadville, evidently feasting on marmots in the summer and elk carcasses in the winter.

“Then he ended up in North Dakota!” remarks one of the West’s leading wolverine experts today, Bob Inman of Montana.

Yes, in 2016, M56 reemerged in a North Dakota rancher’s Facebook post — shot and killed for allegedly “tormenting the cows.” Never had a wolverine been confirmed in the state’s history dating to 1889.

The legend of the wolverine grew with M56. And so did the questions.

What more was there to learn? Where else could wolverines be? Very likely not in Colorado, went the thinking, due to M56’s departure.

But could the native resident return?

While voters in November directed Colorado Parks and Wildlife to reintroduce another historic and long-gone meat eater, the gray wolf, the wolverine question has persisted. It rose to the surface again with a recent announcement from U.S. Fish and Wildlife Service.

Since M56, state officials have shied away from reintroduction until a higher decision on the wolverine’s proposed protection under the Endangered Species Act. The listing would shift the animal to federal management and place restrictions on land use, including recreation and development.

In October, Fish and Wildlife cited “new research and analysis” that showed “stable” populations in the Northwest and signs of larger populations across the Canadian border spreading down to their former territories.

“The species, therefore, does not meet the definition of threatened or endangered under the Endangered Species Act,” read the announcement. “Accordingly, the Service has withdrawn its listing proposal.”

“We’re having robust discussions about wolverines in this state,” Prenzlow said. “We’re interested in restoring wolverines at some level.”

In response to emailed questions — the agency declined a phone interview — CPW reiterated past estimates of the state’s mountains offering ideal habitat for up to 100 wolverines and added: “Colorado could play a substantial role in the conservation of this species.”

The possibility could be explored more as Colorado is set to join a multistate collaboration committed to wolverines.

Launched in 2015, the Western States Wolverine Conservation Project saw researchers in Montana, Idaho, Wyoming and Washington trek deep into the backcountry on skis and snowshoes to install state-of-the-art monitoring cameras and locate dens. The unprecedented mission verified wolverine presence in some locations and revealed it in others previously unknown, including parts of southern Wyoming.

Colorado will join California, Utah and Oregon in the mission starting next year, says Inman, the project leader. Evidence of breeding in any of those states would be groundbreaking. Colorado, for one, maintains no substantiated sightings other than M56 this century; a dozen surveys between 1979 and 1996 yielded no confirmations either.

“There’s a pretty big gap between high-elevation wolverine habitat in Wyoming and down to Colorado,” Inman says. The Red Desert, he says, poses “a natural barrier,” helping to explain why wolverines haven’t showed signs of regrouping here as elsewhere across the Rocky Mountains and Cascades.

But their demise here was similar before game wardens set rules in the 1930s and ‘40s: wolverines were trapped for their fur, shot out of fear and further decimated by poison left on carcasses — a tactic also used against gray wolves.

Wolverines “seemed to have reestablished themselves in most of the places that we think they were historically,” says Diane Evans Mack, the conservation project’s team member based in Idaho. “But what we don’t know, and what we probably never will know, is whether the density of the animals is the same as what it was historically. In other words, Do we have as many as we used to?”

Those who answer no to that question find themselves at odds with Fish and Wildlife’s “stable” description of the species. The dispute intensifies with grim prospects of global warming, what the federal agency listed as a “potential stressor” to wolverines in a 2018 assessment.

“I do not think the species is at full occupancy,” says Watters, with Wolverine Foundation, “and I think it’s going to face some really serious challenges in the coming decades.”

A mother’s den depends on spring snowpack, “and this factor will be critical to determining the future extent and survival of wolverine populations,” wrote U.S. Forest Service investigators in a 2010 report on climate change. Also, researchers say diminished snowpack could be detrimental to the way wolverines stash food. And it could affect how their snowshoe-like feet move far and fast in ways beneficial to hunting and avoiding predators.

“It’s why our work has focused on connecting habitat, in order to make sure where they exist now on the landscape still functions for them to continue to exist there,” he says. “And that’s why the restoration piece is significant. Because that would be connecting the remaining historical range.”

Restoring wouldn’t be without controversy, he notes.

“There’s a whole suite of ethical questions you have to ask,” Watters says.

They are acute in the case of wolverines. Females might live 10 years and in that short time might give birth to one or two kits or cubs; monitoring survival and reproduction would be tricky. And the stakes are higher, Evans Mack says, considering wolverines’ already low density.

“It takes a lot of animals to do a successful translocation,” she says. “I guess I just wonder where those animals would come from.”

And wolverines, like wolves recently, would surely create a political divide. The endangered question is anticipated to be battled in courts. And on one side are businesses that see a federally listed wolverine as standing in the way of progress. The ski industry, for instance, has been outspoken about potentially sharing land with wolverines and being mandated to scale back operations and plans.

For all of the uncertainty, one thing is for sure, Inman says — another lesson learned from M56:

“Every critter out there is determined to survive. They don’t give up and fold that easy, certainly not a wolverine.”