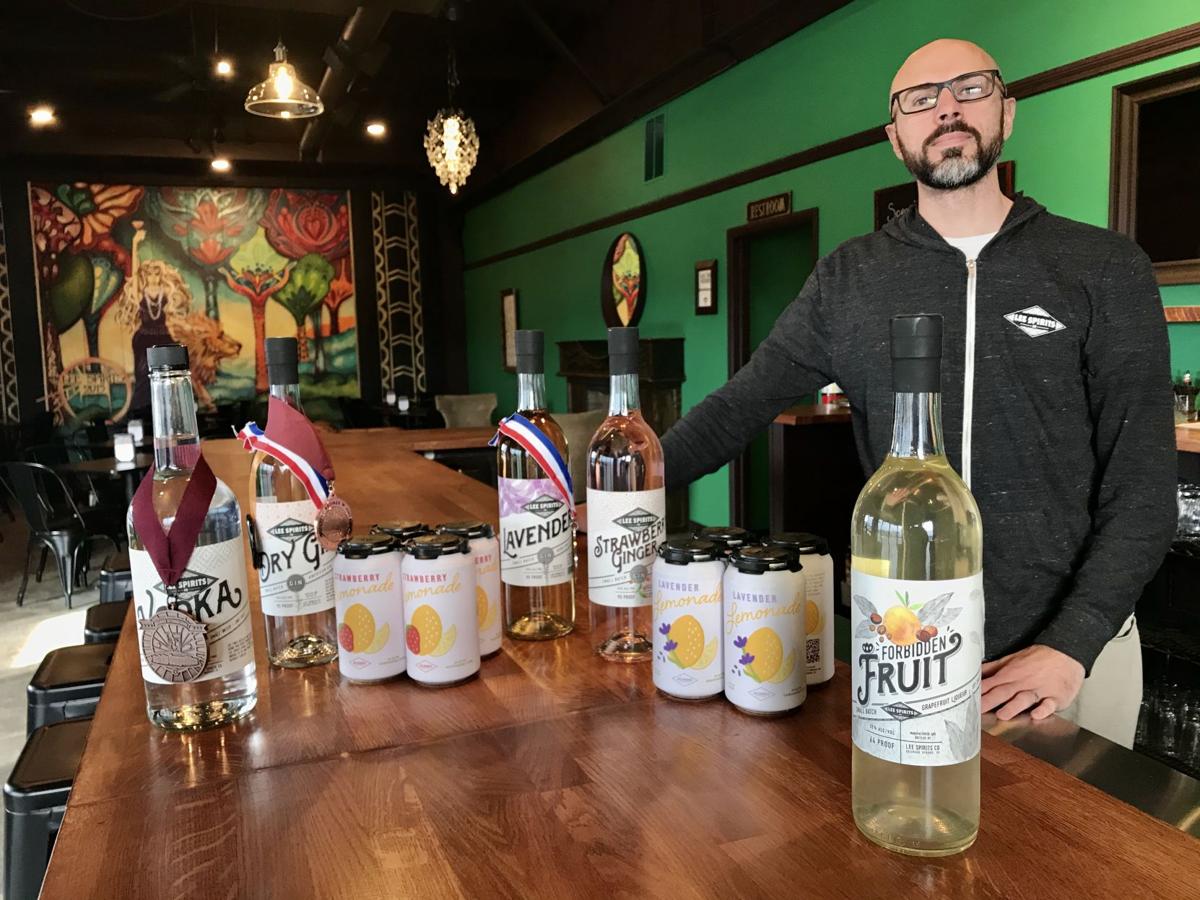 Nick Lee, co-founder of Lee Spirits Company, stands among a variety of products available in its new tasting room in Monument. 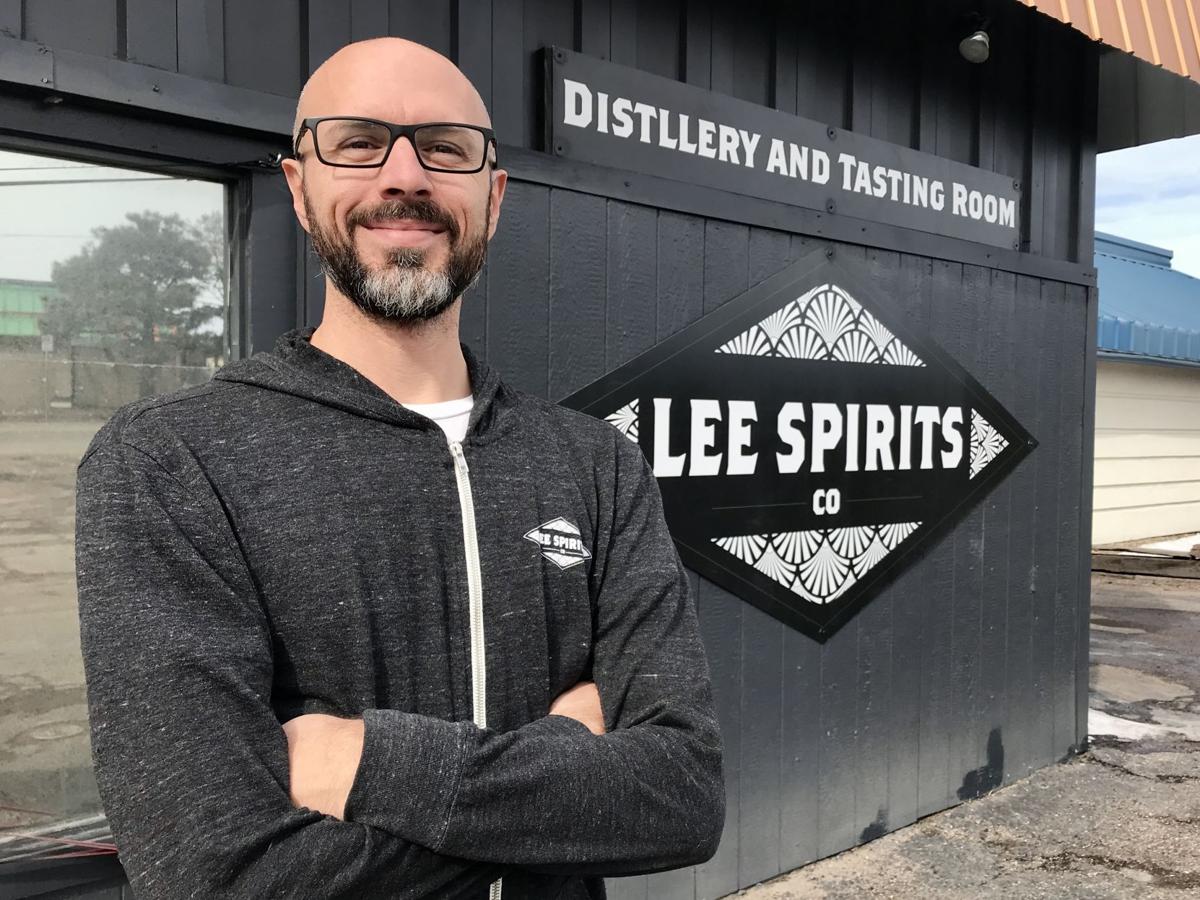 Nick Lee, co-founder of Lee Spirits Company, stands outside the distillery’s second location, now in Monument, an expansion of the company he co-owns with his cousin, Ian Lee. 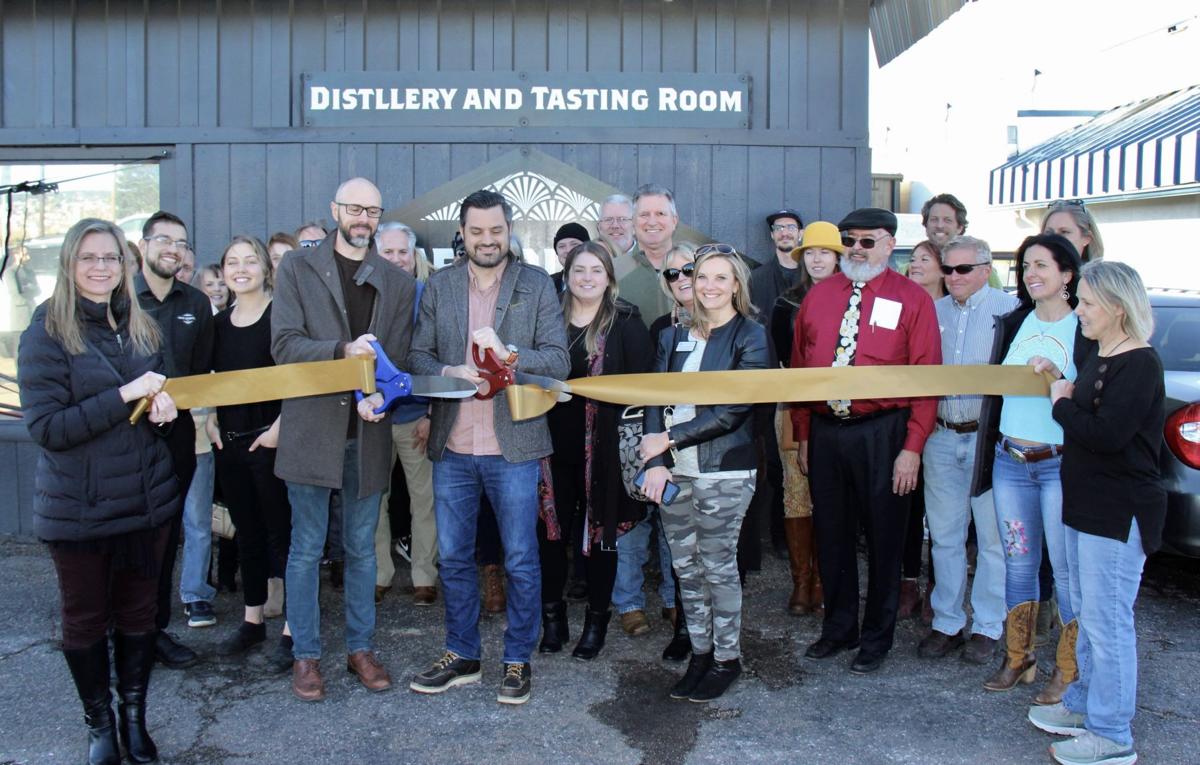 Nick Lee, left, with blue scissors, and Ian Lee, red scissors, and a gathering of member support from the Tri-Lakes Chamber of Commerce, had an official ribbon cutting ceremony to celebrate the grand opening of the Lee Spirits Company’s new location Feb. 21 in Monument. Although Lee Spirits Company opened its first location four years ago, the first night of the new Monument location broke the record for the company’s one-day sales.

Nick Lee, co-founder of Lee Spirits Company, stands among a variety of products available in its new tasting room in Monument.

Nick Lee, co-founder of Lee Spirits Company, stands outside the distillery’s second location, now in Monument, an expansion of the company he co-owns with his cousin, Ian Lee.

Nick Lee, left, with blue scissors, and Ian Lee, red scissors, and a gathering of member support from the Tri-Lakes Chamber of Commerce, had an official ribbon cutting ceremony to celebrate the grand opening of the Lee Spirits Company’s new location Feb. 21 in Monument. Although Lee Spirits Company opened its first location four years ago, the first night of the new Monument location broke the record for the company’s one-day sales.

Although the Lee Spirits Company has been in business for four years, its new Monument location broke a company record on its first day.

Lee Spirits Company, founded, owned and operated by cousins Nick and Ian Lee, had a grand opening with a ribbon-cutting ceremony Feb. 21 at 303 W. CO Highway 105 in Monument. Lee Spirits was not only welcomed by members of the Tri-Lakes Chamber of Commerce and the community, but also had a record-breaking day of sales at the new location.

One of the smallest micro-distilleries in the country, Lee Spirits opened its first distillery in Colorado Springs and a speakeasy-themed tasting room called Brooklyn’s on Boulder Street there four years ago. The Monument location also includes a tasting room that its founders hope to contribute to the culture of the northern El Paso County region, Nick Lee said.

Per Colorado State law, the tasting room features solely spirits manufactured by the distillery. The Monument location spotlights gin infusions and the company’s own vodka.

Nick and Ian Lee originally went into business together with a technology and software company. However, the pair found themselves unfulfilled with careers creating intangible products, Nick Lee said. There was talk of opening a winery, but the two ended up pursuing their enthusiasm for pre-prohibition era cocktails and gin on a different path which led to Lee Spirits Company.

“We learned to distill and decided that’s what we really wanted to do,” Nick Lee said. “We felt that would add value to the culture more than a software company would.”

Among Lee Spirits’ unique product line is Forbidden Fruit Liqueur, a white grapefruit and honey-based liquor wildly popular in pre-prohibition era cocktails. Cousins/business partners Nick and Ian Lee, during their research and development, read books of cocktail menus from the early 1900s and found that Forbidden Fruit was an ingredient in many libations. However, they could no longer find that liquor available or even manufactured in the country.

The Lees learned Forbidden Fruit was invented by a family which sold the manufacturing to Chambord Liquors, which bought the brand solely for its bottle design, a spherical bottle with a small crown on the top. The company stopped manufacturing the Forbidden Fruit liquor in the 1950s. However, the Lee cousins were able to hunt down old bottles of Forbidden Fruit from auction houses and from there they went to work.

“We built ours from the ground up, tasting side-by-side with the original and now you basically can’t tell the difference,” Nick Lee said. “We brought that back to market and we were basically the first distillery to do so.

“You can make all kinds of original cocktails with the Forbidden Fruit which don’t exist anywhere else.”

Enhancing Brooklyn’s theme, the storefront of the Colorado Springs location has the appearance of a 1920s haberdashery with racks of coats, hats and the like. Patrons have to walk through the storefront to a door at the back, ring a bell and gain “secret” access into the tasting room and adjacent distillery.

As for the Monument location, Nick Lee said they decided to adopt a theme for its tasting room designed to spotlight the natural raw ingredients of their products and brand. Having started their distillery in a basement, the cousins learned quickly how to be cost-effective and efficient with their manufacturing process, traits they brought to their distillery in Monument.

In addition, the Lees distribute their products across the Midwest and Texas. One reason they looked to open a location in Monument was to benefit from their distribution lines being so close to the I-25 corridor.

“We created a menu and slate of cocktails and tasting flights which really highlight the things we make,” Nick Lee said. “They are designed so the home bartender can buy our products and make these cocktails at home.”

The Monument location also features a line of canned cocktails, sans carbonation. The product line is a beverage made with gin infused with strawberry or lavender and ginger and mixed with lemonade, available on tap in the tasting room.

“Based on sales so far, it’s been gangbusters,” Lee said of the product which launched the week prior to Lee Spirits’ opening. “We are super excited about being here in the Monument community and connecting with the people here and having them be guests in the tasting room.”

Lee Spirits Company tasting room is open 4 p.m. to midnight, Wednesday through Saturday, noon to 6 p.m. Sunday and closed Monday and Tuesday. Nick Lee said they designed the hours to serve people who would like to stay out after 10 p.m. and they look to accommodate an older, established clientele and market of the Monument demographic.

In the near future, the partners look to add a small modular stage to the tasting room to host live music as the venue’s atmosphere is an appropriate fit for small jazz or slow blues bands.

Over the next six months, Lee Spirits is working toward having its distillery operations completely out of the Monument location and eventually to expand the footprint of their brand into other states.

While there is no food menu at the establishment, food trucks are planned to visit the parking lot at the Monument location during the tasting room’s operating hours.

Brooklyn’s on Boulder Street is part of the Colorado Distilleries Guild’s distilleries tour map from which patrons can go to all the distilleries on the tour and get a bottle of the product at each location. Nick Lee said being on that tour has been successful for the Colorado Springs location.

“We are excited to bring that traffic into Monument and get people into the community who may otherwise not have come here,” he said.