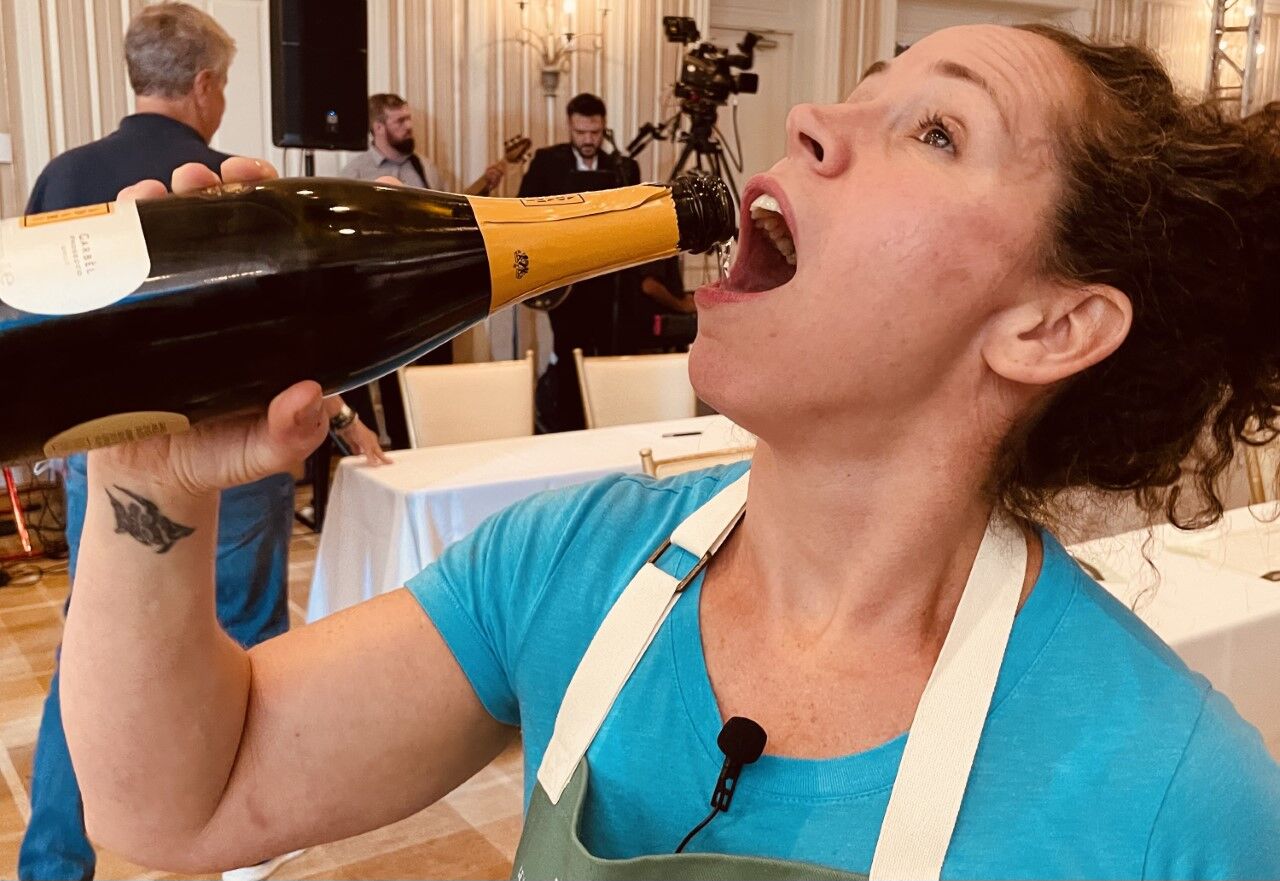 Stephanie Izard celebrates at the end of her cooking demonstration at the Food & Wine Classic this month in Aspen in September. 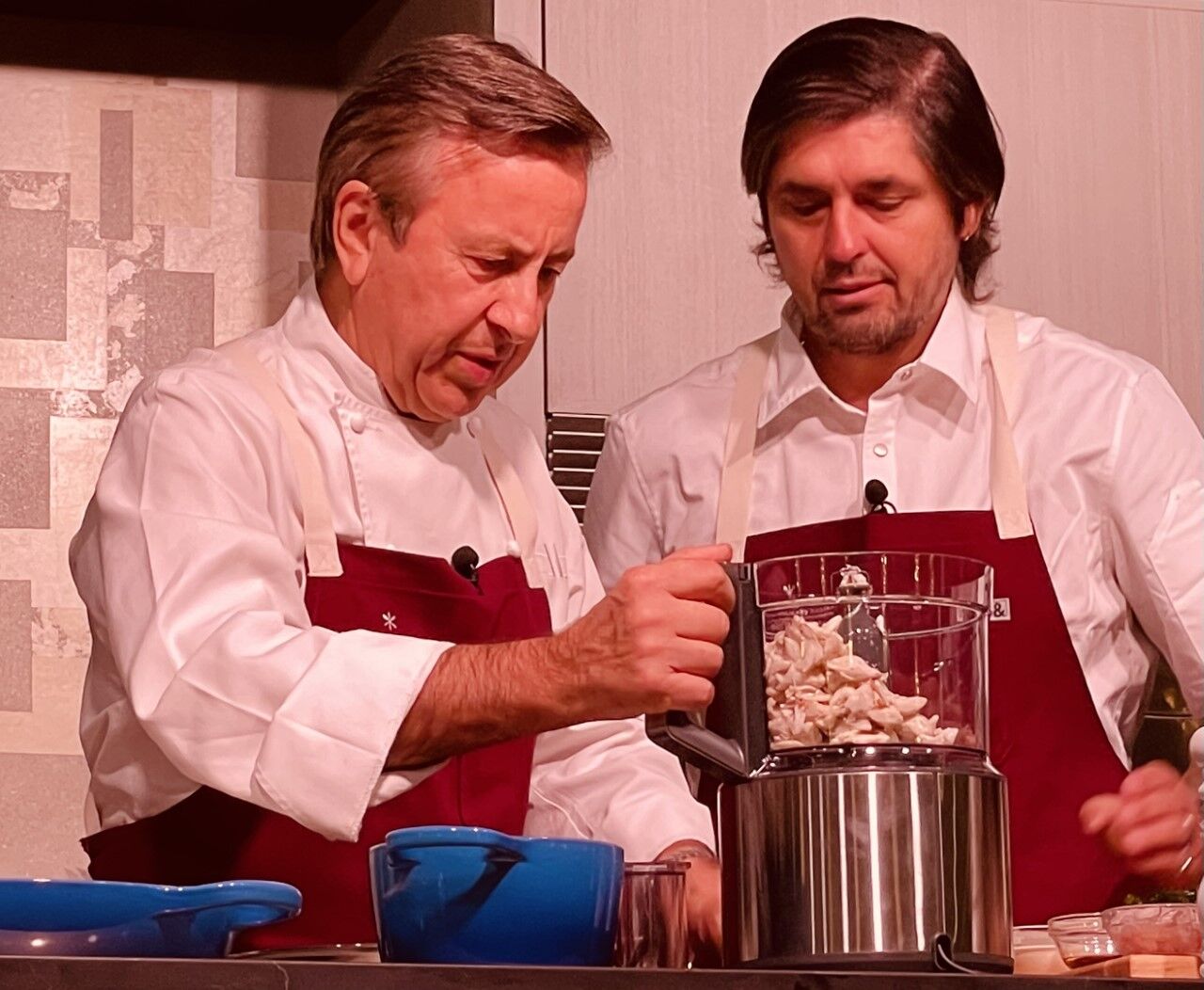 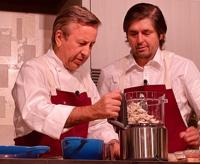 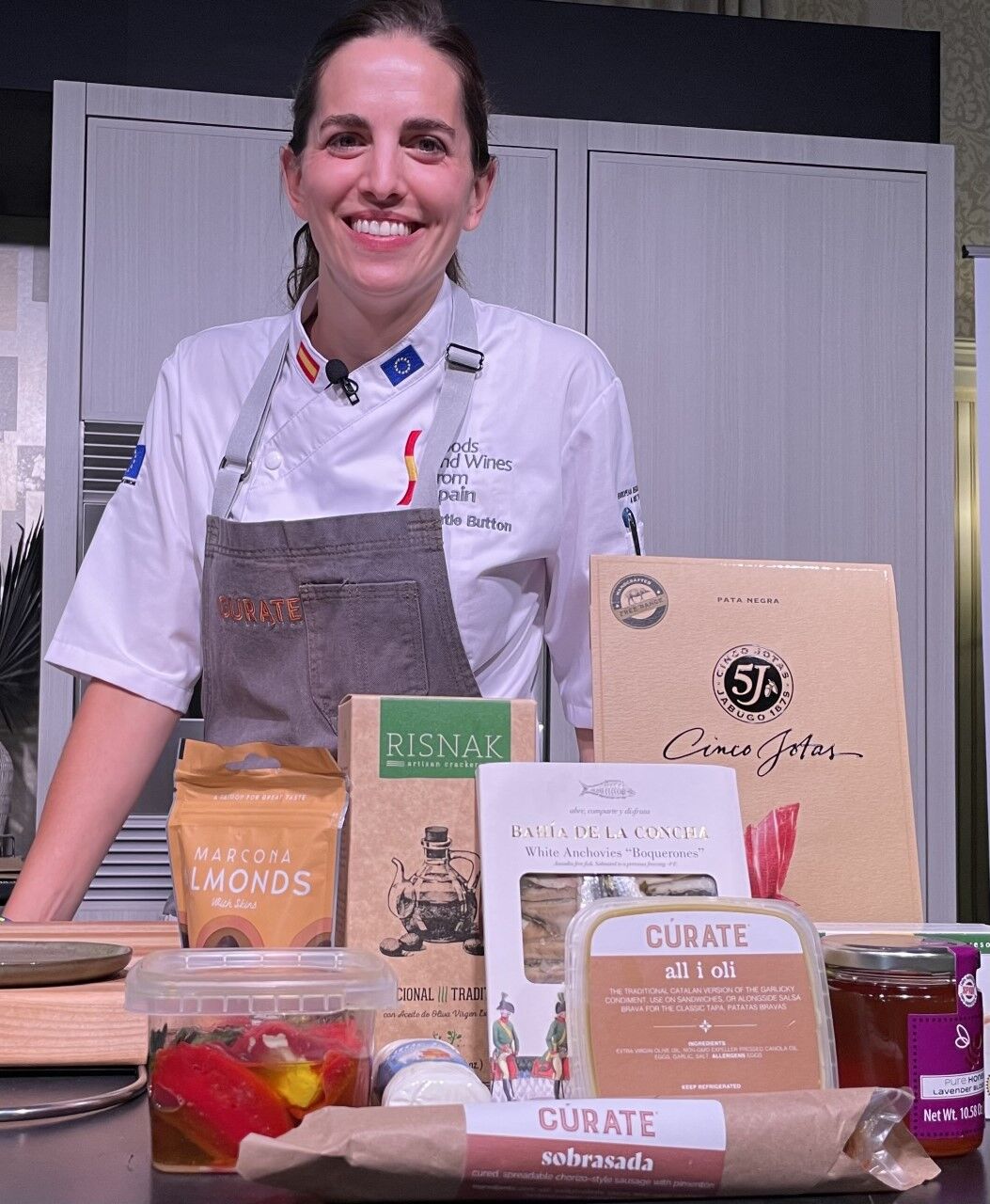 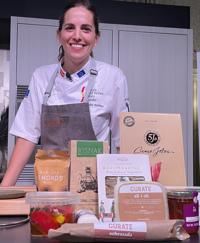 Katie Button prepared dishes based on her online food company, Curate at Home, at the Food & Wine Classic this month in Aspen in September. You can order high-quality Spanish foods through the website at curateat home.com. While at the site, check out Curate Trips, which offers culinary adventures to Spain, Portugal and Morocco.

Stephanie Izard celebrates at the end of her cooking demonstration at the Food & Wine Classic this month in Aspen in September.

Katie Button prepared dishes based on her online food company, Curate at Home, at the Food & Wine Classic this month in Aspen in September. You can order high-quality Spanish foods through the website at curateat home.com. While at the site, check out Curate Trips, which offers culinary adventures to Spain, Portugal and Morocco.

Like most everything in 2020, Aspen’s Food & Wine Classic — the granddaddy of all wine and food extravaganzas — was put on hold because of the pandemic. It’s been held a June tradition for decades, attracting the world’s top chefs who present cooking demos, classes, and seminars. This year, like last year, June came and went without a Classic. But a mini-Classic was held Sept. 9-12. I attended four of the events over the weekend and wanted to pass along what I learned.

“Turn Everyday Meals into the GOAT.” Let’s first explain “GOAT.” Stephanie Izard owns a group of eateries in Chicago, including her flagship, Girl and the Goat. The word “goat” is in the name of several of her other eateries because, “My last name, Izard, is the name of a mountain range in France and translates to goat. Goat is easier to remember than Izard, so that’s what I went with for naming my eateries.”

But for the cooking demonstration, the award-winning chef — and the first woman to win Bravo’s “Top Chef,” in 2008 — prepared three recipes “that reflect how I eat at home.” During the pandemic, when her restaurants were shut down, Izard was still busy cooking and trying out new ideas.

When she creates a new recipe, it must have something salty (pickles), creamy (mayo) and crunchy (seeds or nuts).

“I want to experience a lot of texture and flavor in dishes,” she said.

To that end, she has started a condiment line called This Little Goat, described at her website as “globally inspired, flavor-packed foodie add-ons that make the most basic meals something unexpected and craveable.”

Izard threw in other tidbits of advice as she cooked.

“Always use salt in desserts,” she said. “Not a lot. Just a little will enhance the flavor and bring out the sweetness.”

And her favorite ingredient?

“Kewpie,” she said. “I did a taste-off of all the mayos you can find in the grocery store, and the sweetness of Kewpie is now my favorite.”

You can order ingredients to prepare her dishes as well as other interesting-looking items at thislittle goat.com.

‘Made for This Moment’

Joe Flamm, winner of season 15 of Bravo’s “Top Chef,” debuted his first restaurant, Rose Mary, in Chicago’s Fulton Market District in April. The eatery is named for his grandmothers, Mary and Mary Rose, and the food there, as well as the recipes he presented in Aspen, reflect his Italian heritage and the bold, bright flavors of Croatian cuisine, where his wife’s family is from.

He prepared corn risotto using a stock made with corn.

First, he grilled the corn to bring out its sweet flavor, then cut the corn off the cob and set that aside. The cobs were placed in water with a lot of butter and simmered, along with a piece of cheese rind.

“Butter, corn (cobs) and cheese work shockingly well together,” he said. “You end up with a corn broth to cook with the risotto.”

The kernels were made into a simple pickle.

“Make a marinade of sugar and vinegar,” he said. “One to one works well to make this corn pickle relish.”

His cooking tip: “A lot of my cooking is by seeing and by feeling, and of course, tasting as I go along,” he said.

Daniel Boulud is a legend in the culinary world, with a slew of restaurants including his flagship, the two-Michelin star Daniel in New York City. Ludo Lefebvre is based in Los Angeles, where he has his Trois Mec, a one-Michelin star restaurant. The two teamed up to present this cooking demonstration.

The crab cake was made with a mixture of crab and shrimp, cream and eggs, which was whirred in a blender to make a creamy mousseline. The three recipes had many steps and were complicated — typical master chef creations. Fun to watch being prepared, but probably not something I would tackle myself.

What I did pick up was that when cooking with wine, a whole bottle should be gently simmered until is reduced by half.

“It intensifies the flavor of the wine,” Boulud said.

Lefebvre announced he is opening a fine French restaurant, Chez Marie — “named for my mother,” he said — in December in the Denver Milk Market food hall, in the city’s historic Dairy Block. Now that’s something to look forward to. And it will be the place to sample the complex dishes he prepared in Aspen. The two chefs hinted about cooking together at the Colorado location.

‘A Taste of Spain from a North Carolina Kitchen’

Katie Button and her husband, Felix Meana, presented this demonstration, cooking together “like we do at home,” Button said. The couple own two restaurants in Asheville, N.C.: Cúrate Bar de Tapas and La Bodega by Cúrate.

Button honed her culinary skills in the kitchens of some of the world’s best chefs, most notably Ferran Adrià and José Andrés when she lived in Spain, which has influenced her cooking style. She published her first cookbook, “Cúrate: Authentic Spanish Food from an American Kitchen,” in 2016.

“The thing I fell in love with while living in Spain was cooking from the pantry,” Button said.

Meana chimed in, “In Spain, you have to have a good pantry.”

The menu Button and Meana prepared for the class was based on her cookbook using foods from Spain.

“The dishes we are doing today are no-heat cooking,” Button said. “Using foods from our online store, you can make this menu and you don’t have to lift a finger. We’ve done it for you.”

Button’s tip: When eating ham, let it rest in your mouth before you begin chewing.

“You can enjoy the flavor as the meat warms up,” she said, “sort of like tasting chocolate.”

You can order high-quality Spanish foods through the couple’s Curate at Home online company, curateathome.com. While at the site, also check out Curate Trips, which offers culinary adventures to Spain, Portugal and Morocco.

Some good news for next year: The 2022 Food & Wine Classic in Aspen will return to its regular month, June 17-19. Tickets will go on sale in January.

Young Colorado Springs restaurant owner is a go-getter: From cannabis to tacos and now back to medicine

Young restaurant owner Michael Thompson wears many hats, from being a partner in a cannabis businesses to owning a handful of Colorado Springs eateries.