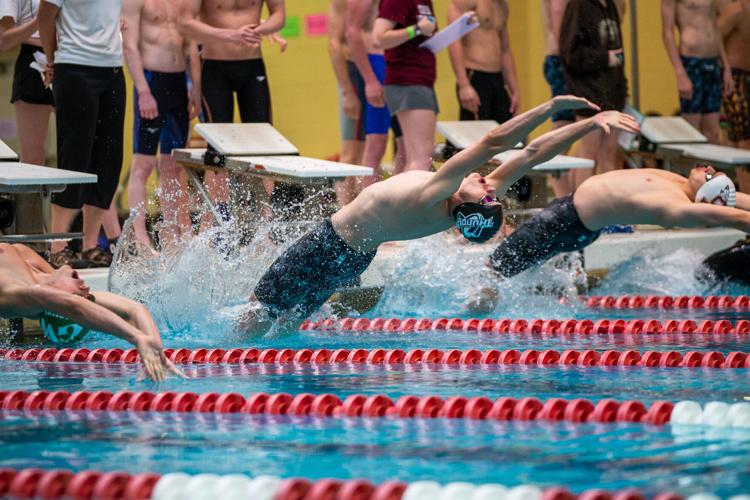 Every meet, he breaks out the pages and a pen and begins to write. He’s jotted down his times, from every event, since he was young. It’s his own way of tracking progress in a boys’ swimming landscape dominated by incremental improvements over time.

National meets, local meets, it doesn’t matter. Every race matters to the Discovery Canyon senior, and it’s why he took home multiple individual state titles this year, and a Peak Performer nod.

When I first started swimming, it was more of an activity to keep me busy while my parents were at work — almost like babysitting,” McCarty said. “I started a summer program at Flying Horse and after that, I started looking for a club team.

“Swimming’s become part of my normal life for 11 years now.”

The sport could’ve been baseball, it could’ve been hockey — heck, it could’ve even been basketball with McCarty’s tall frame. But swim is what the McCarty clan landed on for an outside-of-school activity. His parents, Annie and David McCarty, don’t have a swimming background. Both were athletes, just not in the pool.

As McCarty got better, his goals changed. Splashing around and enjoying the water turned to bigger dreams like heading to college for the sport, and even shooting for an eventual Olympic berth one day.

With McCarty entering the year with a commitment to top swim school North Carolina State, his coach, Joe Fanthrop, began to experiment, a decade after the original test that landed the standout in a pool to begin with.

“He was well-respected on the team, despite not being with us all four years,” Fanthrop said. “I tried to put him in a challenging position. He goes to meets and wins races by multiple body lengths.

“I tried to stretch him out and make the meets harder for him, and put pressure on him.”

Though McCarty only swam for Discovery Canyon in limited spurts around national and club competition the first three years, the two shared a relationship of trust.

He swam freshman year, then was put on ice for the next two years due to COVID-19. For a four-month stretch, he didn’t swim, and returned to the pool with a renewed strength and focus soon after.

By junior year, he was even competing in Olympic trials, which forced him away from DCC’s program. He traveled to Budapest and Berlin to compete for the nation but always eyed a return.

When Fanthrop put McCarty in different spots throughout a relay team or threw him into strokes he hadn’t mastered, the senior came through each time.

By season’s end, McCarty held the state, 4A lead in five individual events. His qualifying times also put him second in the 200-yard individual medley and placed the Thunder atop every relay leaderboard.

“From being 11 or 12 years old, this sport had my full commitment,” McCarty said. “With the Thunder, I just really enjoyed being surrounded by friends and other athletes.

“Having the flag on the side of your cap is one of the most amazing feelings. The experience was amazing, but right after, I started to look at high school swimming again.”

McCarty and Fanthrop worked together to find a perfect way for him to do both.

Despite being involved with multiple programs and practicing multiple times a day, McCarty hardly missed a Thunder practice or meet.

After all the hoops, McCarty arrived at the Veterans Memorial Aquatic Center for his final high school meet, armed with a desire to set a national record in the 50- and 100-yard freestyles at state.

The shorter of the two races had a top mark set by McCarty’s new teammate at NC State, David Curtiss.

He fell just short of both but drove the Thunder to a third-place, 4A finish.

All of the hours in the pool, swimming for the Thunder were worth it. He was able to change the program for the better.

“He cheers for everybody and was never one to make things about him,” Fanthrop said. “He understood his role with the team, and he did everything he could to bring teammates up.

“Our team wouldn’t have been the same without him, and I think he grew too.”