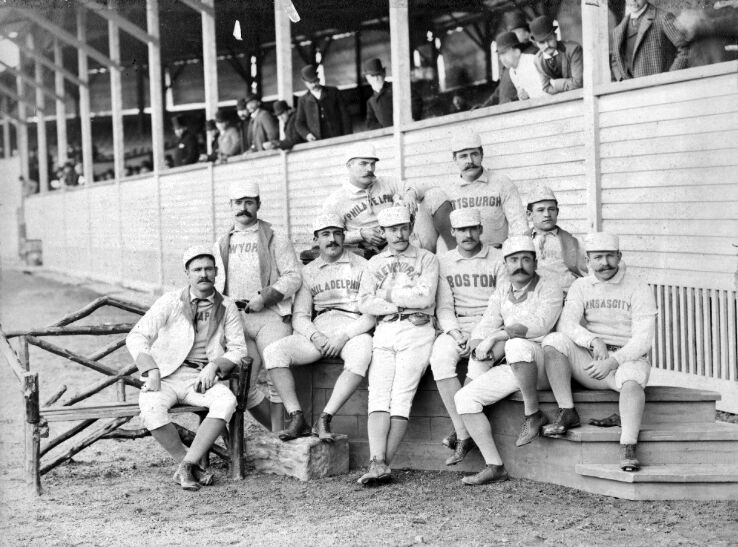 Players from the Chicago White Stockings and All-Americas pose for a photo in the Club House, Kensington Oval, London. 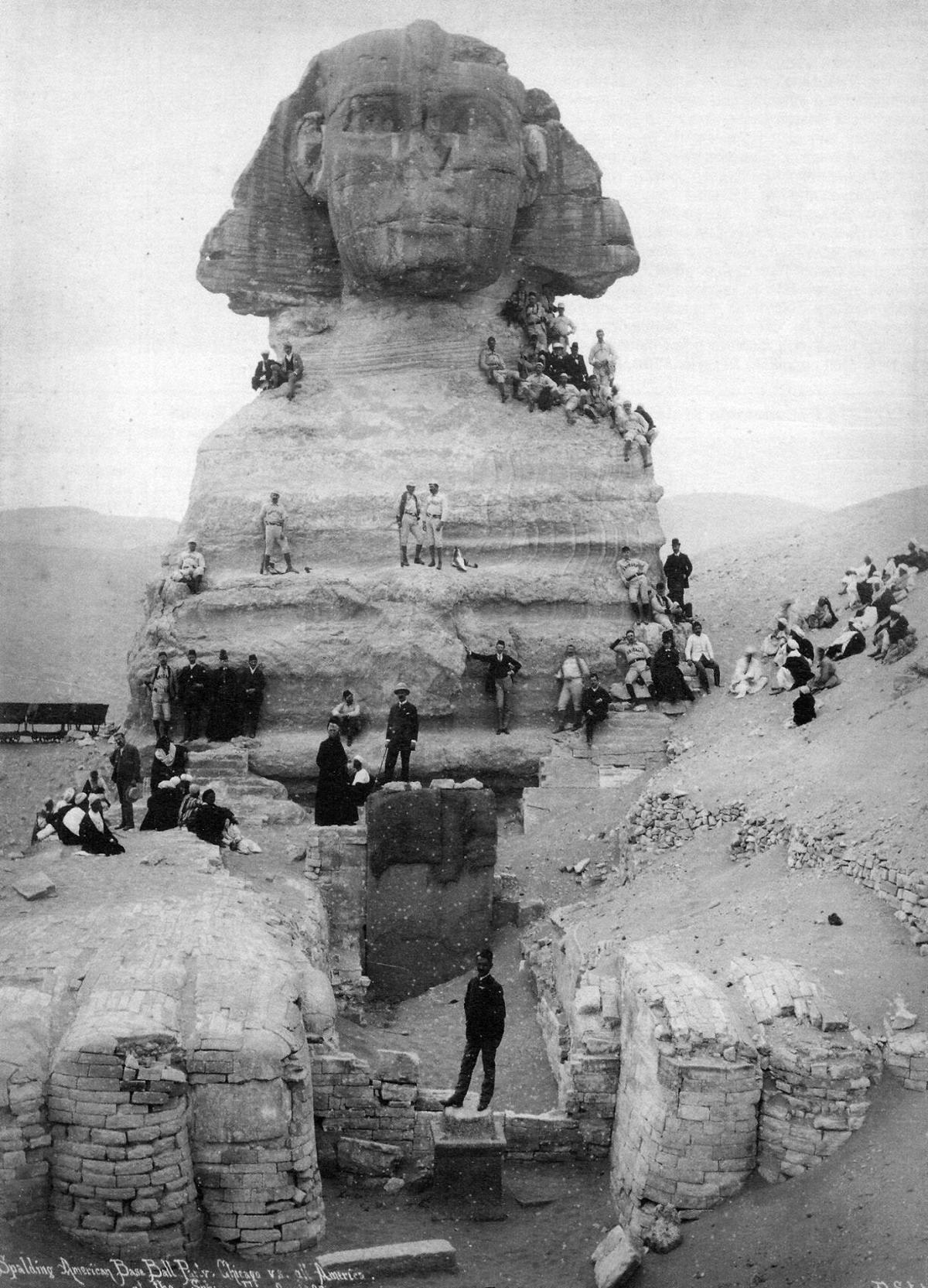 Players and support staff climbed onto the Sphinx in Egypt for photographs. 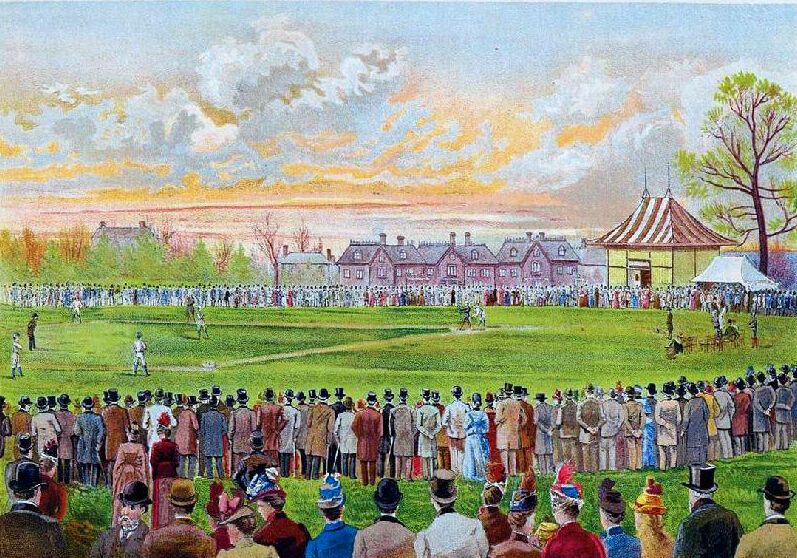 An artist rendering of the game between Chicago and All-Americas at Crystal Palace Grounds, London.

Players from the Chicago White Stockings and All-Americas pose for a photo in the Club House, Kensington Oval, London.

Players and support staff climbed onto the Sphinx in Egypt for photographs.

An artist rendering of the game between Chicago and All-Americas at Crystal Palace Grounds, London.

I love sharing exciting stories about the rich sports history of the Pikes Peak region. Especially about baseball. This week’s column is about a unique event that occurred more than a century ago.

Before I get into that, I want to inform you that this will be my final “From the Sidelines” column as I will soon be embarking on a new role, covering the Colorado Springs Switchbacks FC and Colorado College hockey for our sister paper, The Gazette. Both teams are opening new stadiums this year. These are two important beats that any sportswriter would be happy to dig his teeth into. I am honored.

And I will still be writing about sports for this paper and the other three Pikes Peak Newspapers weeklies.

Now back to this week’s story about the 1888-89 World Tour of Base Ball. This is going to run a little long, but trust me, it’s worth taking those few extra sips of coffee to get to the end.

On Oct. 29, 1888, about two dozen of the National League’s finest players — including several future hall of famers — came to Colorado Springs to play a game. It was an early stop on the seventh-month sojourn around the world that was organized by Albert Goodwill Spalding — the sporting goods guy — to promote the game.

Spalding was president of the Chicago White Stockings (today’s Cubs). The team was led by captain and first baseman Adrian “Cap” Anson. Spalding arranged for his club to play against a team composed of major league all-stars aptly named the All-Americas. That team was highlighted by future Hall of Famers John Montgomery Ward and Ned Hanlon, as well as the game’s reigning home run king Ned Williamson.

Pittsburgh outfielder Billy Sunday, one of the fastest players of his day, was supposed to tour, but he injured his knee late in the season and was encouraged by Anson and Spalding to remain behind and use the offseason to rehabilitate his knee.

Sunday went on to have greater success in another vocation by becoming the most famous and influential preacher of the first half of the 20th century. He gave more than 20,000 sermons to an estimated three million people.

The tour started in either Cincinnati or Chicago around Oct. 19. Oddly, it began the same day Game 4 of the World Series (the series was a different format in those days) that was being played between the New York Giants and St. Louis Browns.

Accounts of the game in Colorado Springs — and games played elsewhere around the world — are sketchy at best. My research shows that there is little consistency with the scores of the games, number of fans in attendance, or even when and where the games were played. I did part of my research at the downtown Penrose Library with the help of Toni Miller and Jessica Spiker of the regional history and genealogy department.

Here’s what we know, or have been led to believe, might have occurred in Colorado Springs. Ward and his Giants teammate Cannonball Crane joined the tour in Denver after New York defeated the Browns in St. Louis to clinch the series in 10 games. Ward was arguably baseball’s most respected layer, while Anson was considered the best and most controversial player in the game.

The Gazette, in its Oct. 29 preview of the game, focused on Anson and Ward because they were clearly the greatest players. Ward himself said of Anson, “Perhaps there is no player in the profession who goes on the field with a stronger determination to win than Anson of Chicago.”

I n the book “Above the Fruited Plain: Baseball in the Rocky Mountain West” (2003), editor Thomas L Altherr gives a fanciful account of the game.

Altherr describes Anson as challenging locals to billiards and, along with players from both teams, took part in several sightseeing adventures like traveling up and down Pikes Peak on horseback and through the Garden of the Gods in the same manner.

There is no information on where the game was played, but various accounts indicate 1,200 fans were in attendance. Altherr described the players as being worn out from sightseeing and putting on a “poor effort.” The All-Americas won the game 12-11, though that is disputed. Players from both teams, apparently, walked off the field during the seventh inning.

Chicago pitcher John Tener (a future Pennsylvania governor and National League president) admitted that “we gave the most miserable exhibition of ball playing possible” in the high altitude.

Colorado Springs fans who attended the game, were so displeased by the much-ballyhooed world tour that they wired ahead to Salt Lake City — the next stop on the tour — to warm patrons. The Gazette’s reporting urged “South Sea cannibals to munch on the players” when the tour hit the Pacific, on its way to Australia. The Gazette also urged that Spalding be arrested for “obtaining money under false pretenses.”

The last games of the first part of the domestic tour were played in Los Angeles around Nov. 15. From there, the players traveled back to San Francisco and boarded a ship for Hawaii, although they did not play any games there. They began their international tour with games in Saan Auckland, Australia, on Dec. 10. Chicago defeated All-Americas 22-13 in front of 4,500 curious onlookers.

Overseas games were also played in Ceylon Egypt, Italy, France, England and Ireland. On March 28, 1889, the players boarded the steamship Adriatic of the White Star Line in England for their final ocean voyage back to the United States. After nine days, the ship reached New York harbor amid a hero’s welcome.