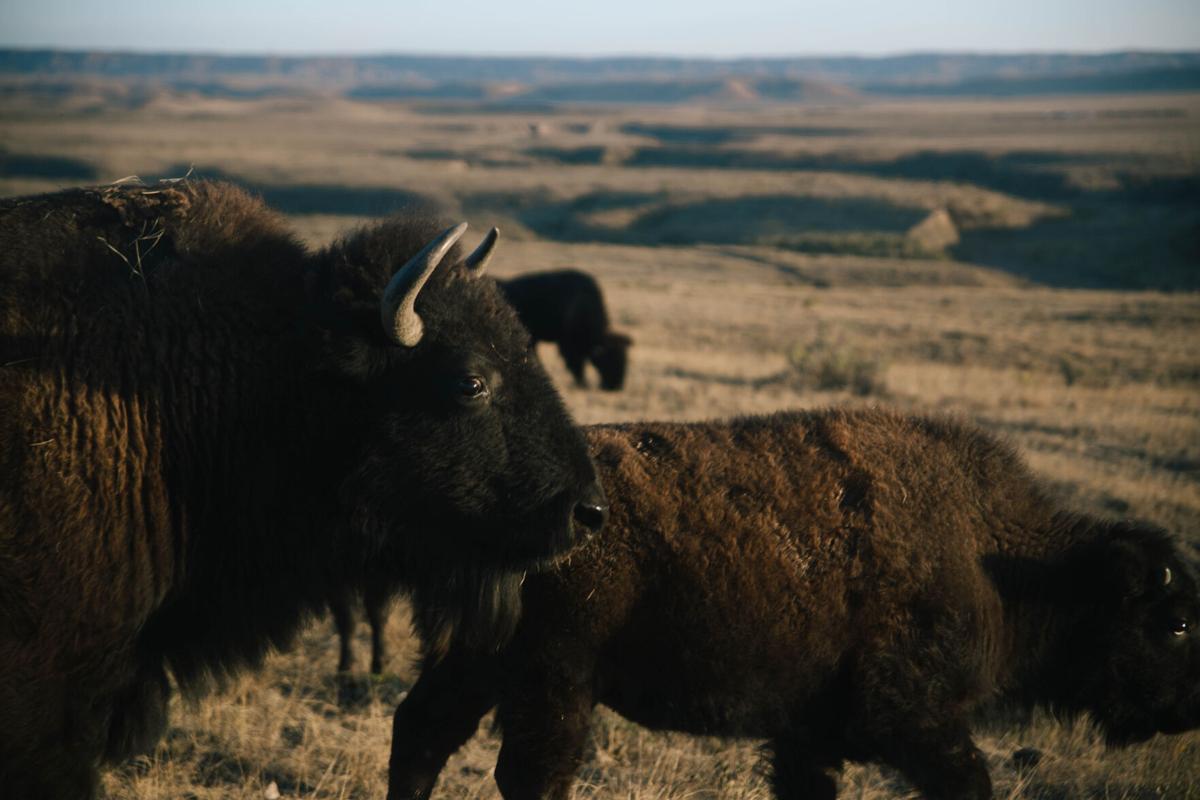 The Laramie Foothills Bison Conservation Herd, the result of a multigovernment effort, has thrived since beginning in 2015 near the Colorado-Wyoming border. 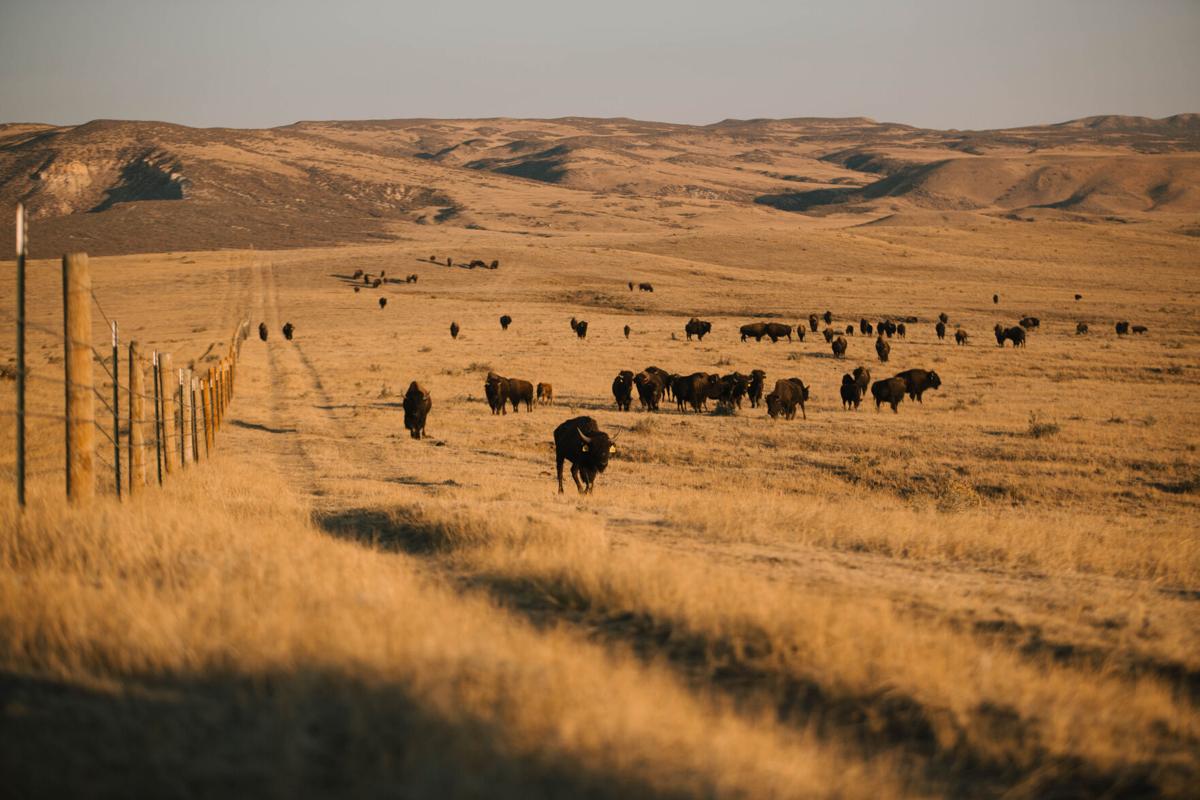 Managers of the Laramie Foothills Bison Conservation Herd near the Colorado-Wyoming border count about 100 bison since beginning with 10 in 2015. 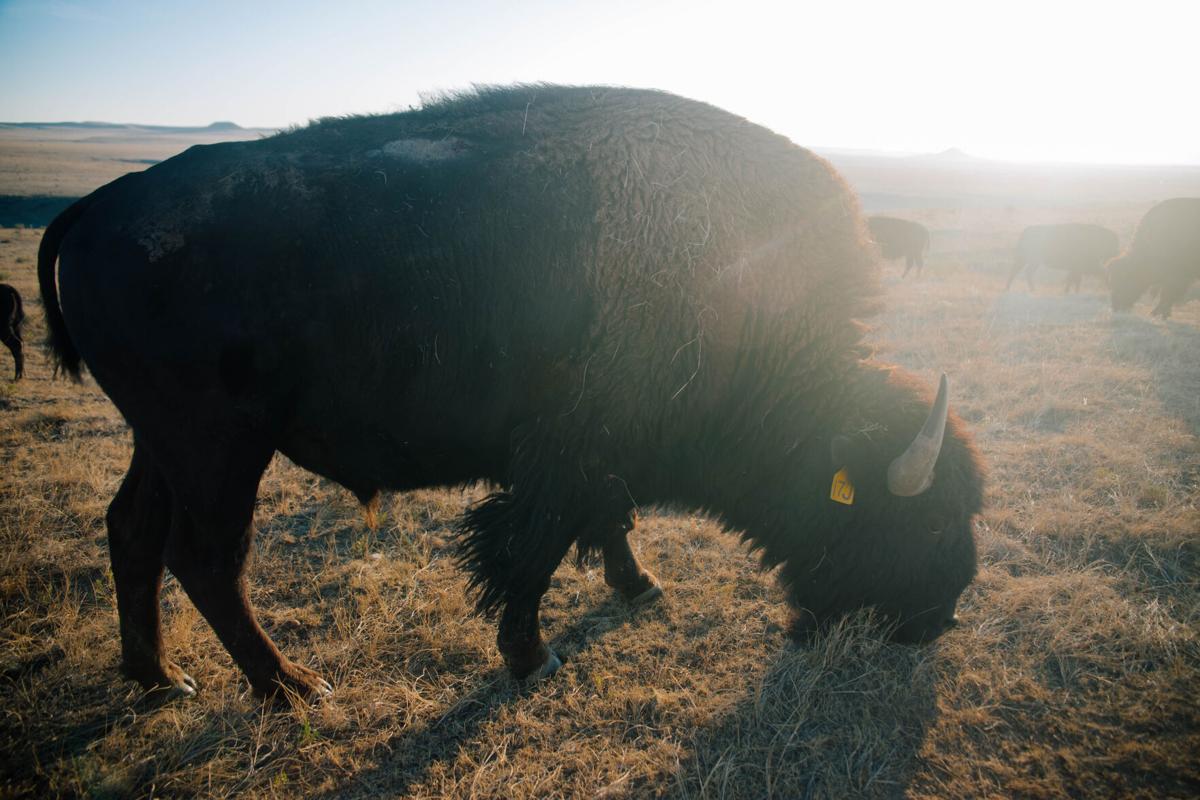 The sun shines on a member of the Laramie Foothills Bison Conservation Herd near the Colorado-Wyoming. Photo courtesy Kellen Bakovich, Colorado State University 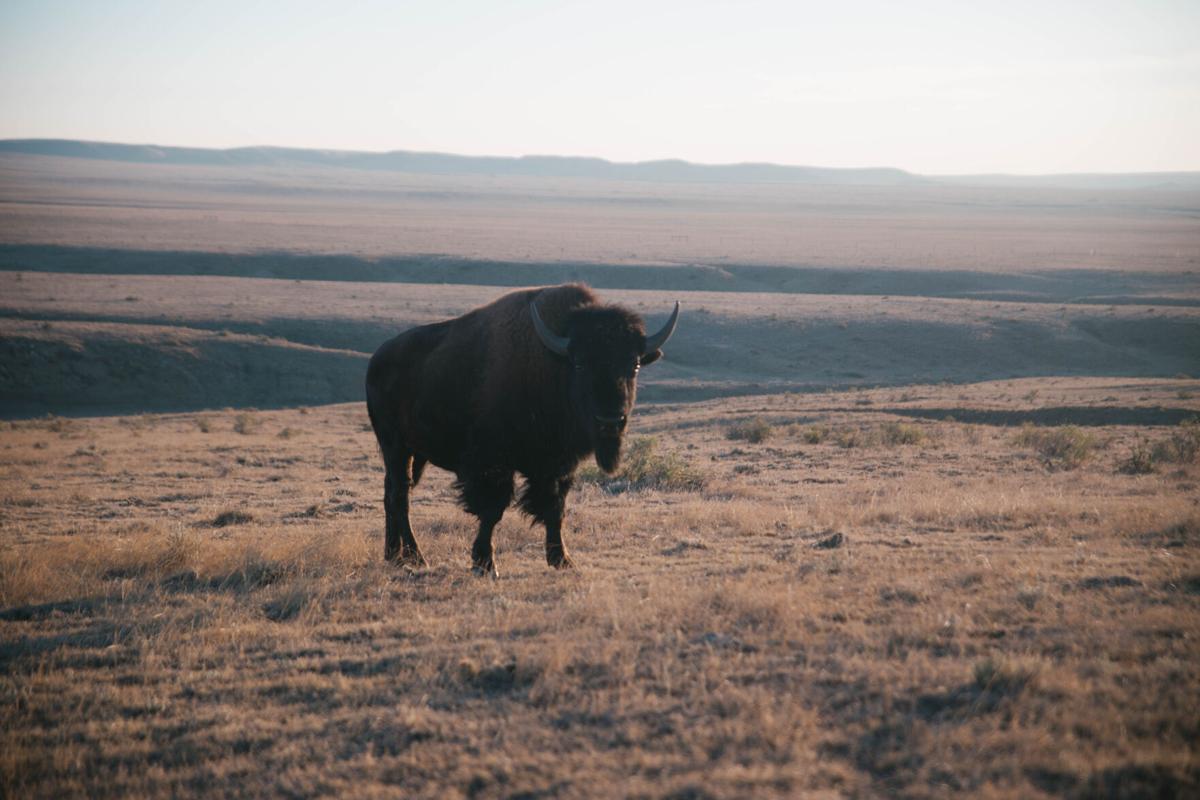 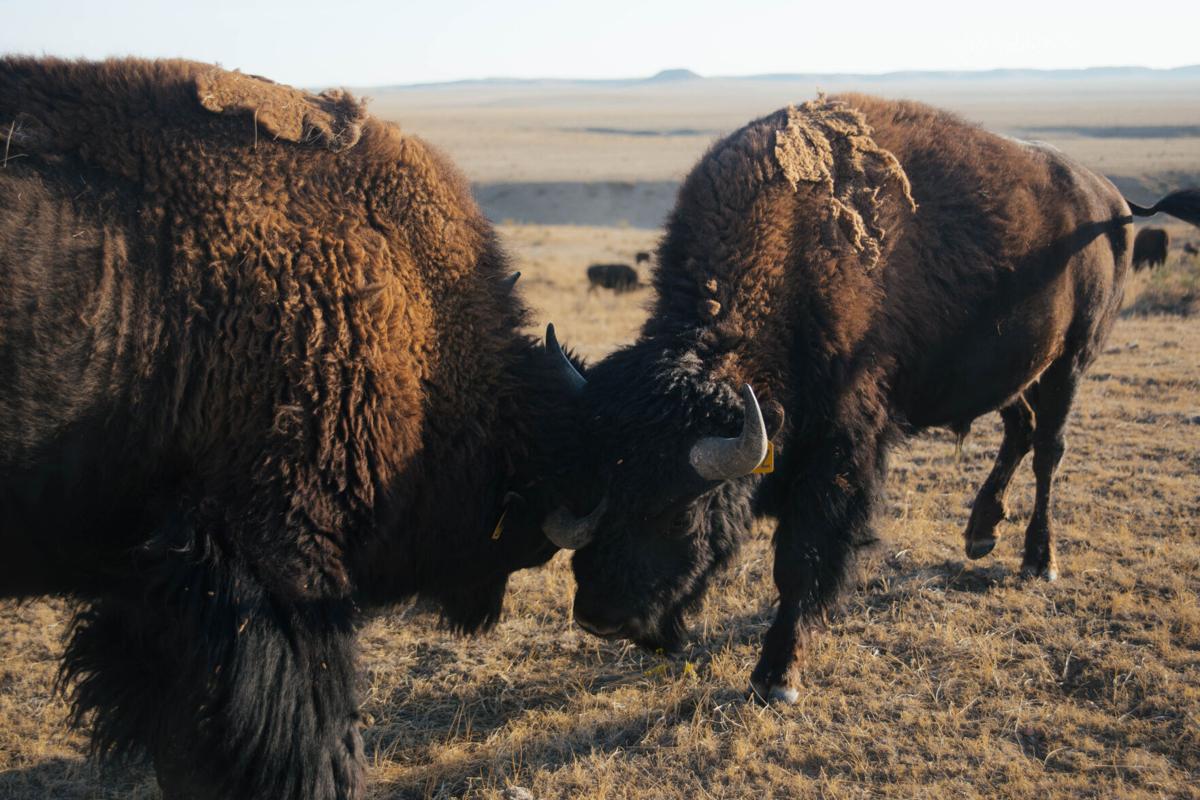 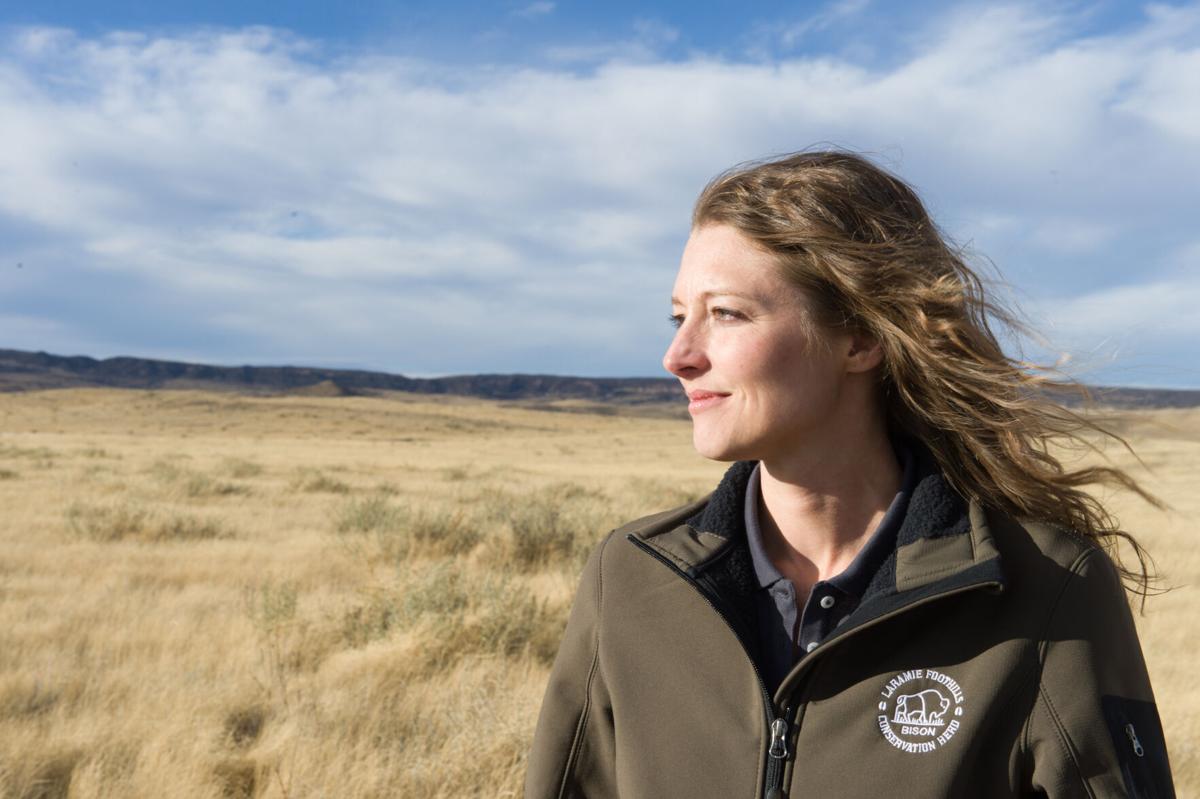 The Laramie Foothills Bison Conservation Herd, the result of a multigovernment effort, has thrived since beginning in 2015 near the Colorado-Wyoming border.

Sometimes when Jennifer Barfield is having a bad day, she’ll drive north of her Colorado State University lab.

“I’ll end up in a pasture,” she said — a pasture of bison that she helped bring here to this rolling, open canvas near the Wyoming border.

Barfield, an assistant professor specializing in conservation biology and reproductive physiology, will stand at a distance and watch some of the 100 or so woolly members of this one-of-a-kind group in Colorado. Occasionally the bison come close, so close she can listen to them breathe and chew grass.

“It’s no secret I’m pretty attached to the animals we have in our herd,” Barfield said. “So sometimes when challenges arise or things are difficult … it helps me just to go out and spend some time with them. They’re very calm and peaceful and reassuring.

“And, yeah, I really feel like I draw a lot of my motivation and strength from reminding myself of what we’ve done, and that it’s a good thing, and being out there with the animals just really confirms that for me.”

Barfield would hate to be called mother of the beasts. She’d hate for such a direct link to be drawn between her and the wildlife that she indeed regards as wild. But the title makes sense.

A multigovernment collaboration based in Fort Collins calls this a conservation herd, genetic flag-bearers of the original, once-proud bison that roamed the plains in the millions before being hunted to near extinction during white man’s westward expansion. Descendants of those indigenous bison have been largely confined to Yellowstone National Park. They reportedly occupy less than 1% of their historic range.

But with assisted reproductive technologies steered by Barfield, a growing number of bison with those heirloom genes have set hoof again in Colorado and beyond — pure relatives, without cattle inbreeding.

Five years ago, on the contiguous lands of Soapstone Prairie Natural Area and Red Mountain Open Space, the conservation herd began with a male calf and nine adult females, some of which were the result of artificial pregnancies. Sperm and eggs from Yellowstone bison were cleaned by Barfield and her team preceding embryo transfer. This was to ensure the removal of the pathogen causing brucellosis, the disease notoriously plaguing that herd.

Before then, “brucellosis had really prevented getting animals out of the park in large numbers for conservation purposes,” Barfield said. There was fear of the disease spreading to cattle as well as their ranchers.

The sperm and egg cleaning treatment was built upon decades of technological advancements at Colorado State. Assisted reproduction development was mostly for the sake of livestock; techniques are routine in the beef and dairy industries, similar to the in vitro fertilization process people know.

But could these techniques help restore an emblematic species? Further, could they be used for disease control and prevention? These were questions Barfield pondered alongside a local researcher with the Animal and Plant Health Inspection Service within the U.S. Department of Agriculture.

They had the lab infrastructure. But what about the range?

It just so happened that land managers of Soapstone and Red Mountain had been looking for native herbivores. Grazing, managers knew, was important to soil and vegetation and overall ecological balance — balance that prevailed before these lands were bison kill sites in the 1800s, their bones left behind.

But there was an even greater mission hatched here five years ago, said Meegan Flenniken, with Larimer County’s Natural Resources Department.

“Our ultimate goal was really to create a herd that could act as a seed herd, to help establish bison with these heritage genetics elsewhere,” she said.

“And we’re just so tickled, because sometimes you have these ideas and they don’t work out. In this case, the success has been really wonderful.”

The lineage late last year expanded to a nature preserve in southeastern Colorado, where 10 bison of the conservation herd were transplanted. In the coming months, a bigger group is due for protected prairie in Montana.

The iconic creature’s most precious genes are returning to homelands like never before in modern times.

“It’s rewarding,” Barfield said in a 2019 press release after two bulls had been sent to California to breed, “but it’s always sad to see them go.”

But more must go to maintain the capacity identified at Soapstone and Red Mountain. For the health of the fenced, nearly 3,000-acre ecosystem, it’s best that the head count is capped at around 100, managers say.

In 2016, six red, furry calves were born on these grasslands. They were counted among the first of their genetic line to meet daylight here in at least 150 years, just in time for then-President Barack Obama declaring the bison the official national mammal.

“To me, it’s a real symbol of hope,” said Liba Goldstein, a Colorado State ecologist and conservation biologist.

Her hope is reinforced by feedback from visitors to the area. The bison reintroduction came with pull-offs added to the road into Soapstone, viewing areas along with trails in the park, which opens in March after the annual winter closure.

“I think a lot of people look to the mountains for inspiration and maybe don’t spend as much time thinking about or exploring the prairies,” Goldstein said. But the bison have hinted at newfound appreciation.

That was one takeaway in research conducted by Goldstein alongside a social scientist and grad student. “Ecological and social consequences” were the stated interests of the research paper published in 2019.

On the ecological side, consequences were found to be almost entirely undetermined; the two-year scope of the study was deemed too small to mark any effects on flora and fauna.

The paper, though, reported “significant” changes on the social side.

“We found that visitors cited the importance of protecting open spaces more frequently after the bison reintroduction,” authors wrote, “suggesting that the presence of bison, as a highly recognizable flagship species, forged a stronger sense of connection between visitors and landscape conservation.”

But the herd’s fast growth here in northern Colorado is being closely checked with the limited number of willing caretakers elsewhere.

In America, bison exist at a crossroads of nostalgic admiration and social and political angst, Goldstein explained. Some struggle to imagine the behemoths fitting into an ever expanding urban society of roads and buildings, while others see the species as a threat to their core existence. Some worry “about bison replacing cattle and the way of life that represents,” Goldstein said.

And so Barfield and her partners are on the lookout for more suitable homes.

For Barfield, it’ll be hard to see them go. But “we want to share so that other people can see them,” she said.

Soapstone Prairie Natural Area, 25 miles north of Fort Collins, opens in March after its annual winter closure — affording the opportunity to see the conservation bison herd. Managers advise viewing from entrance road, the south parking lot or Cheyenne Rim Trail. The bison are not always in view and sometimes are at a distance so bring binoculars. More info: https://bit.ly/3jfHXEj