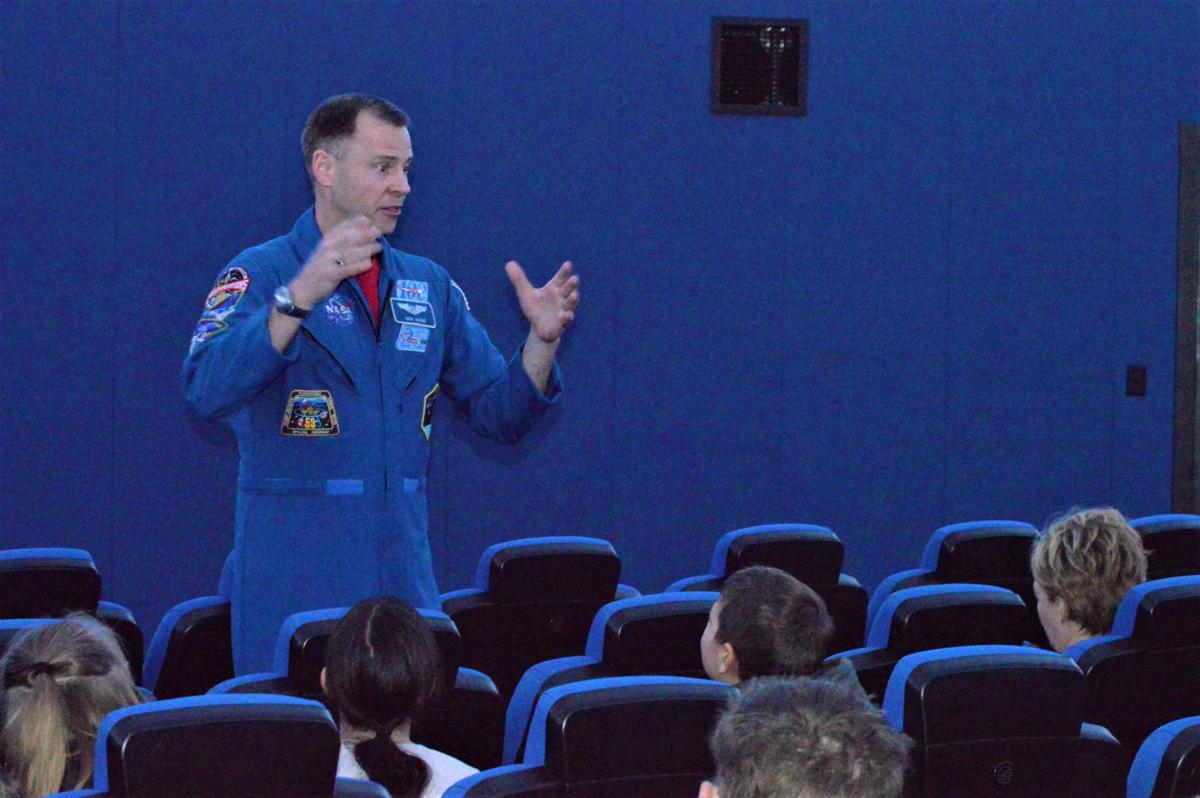 Col. Tyler Nicklaus "Nick" Hague talks about his work at the International Space Station at the Air Force Academy planetarium in Colorado Springs Feb. 6. He is an Academy graduate. 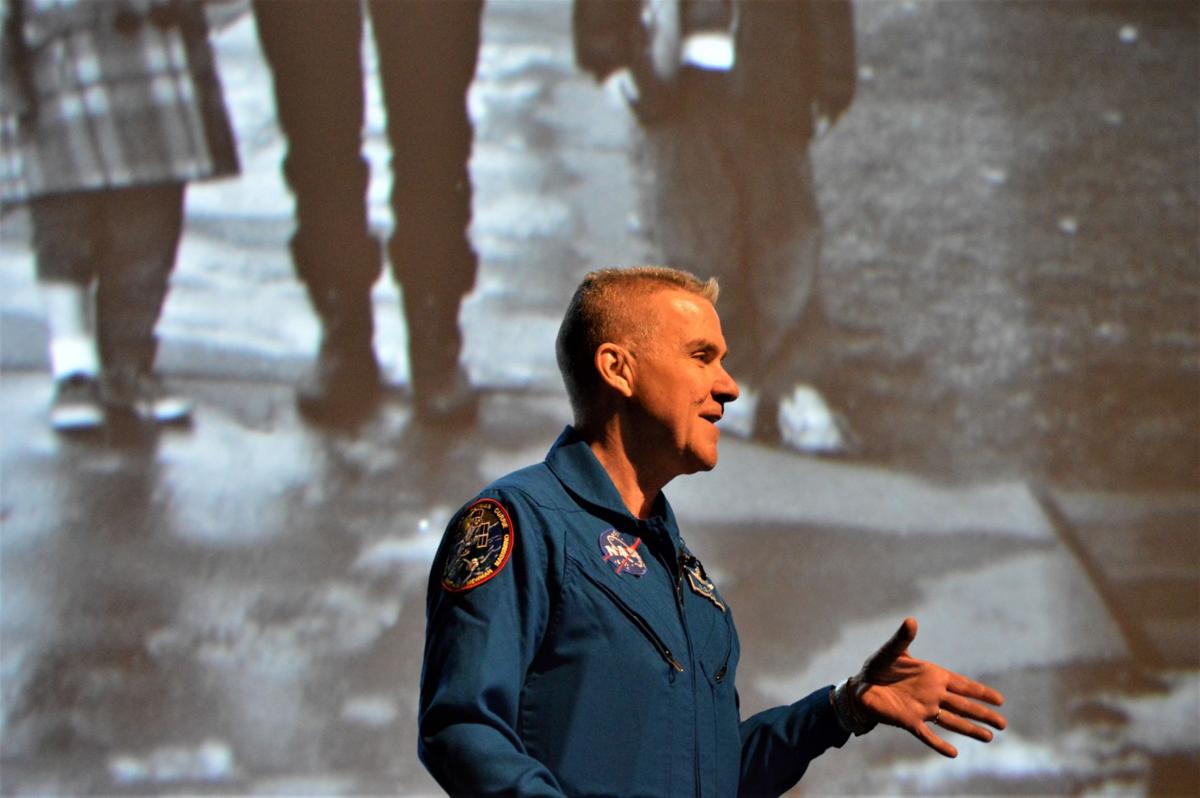 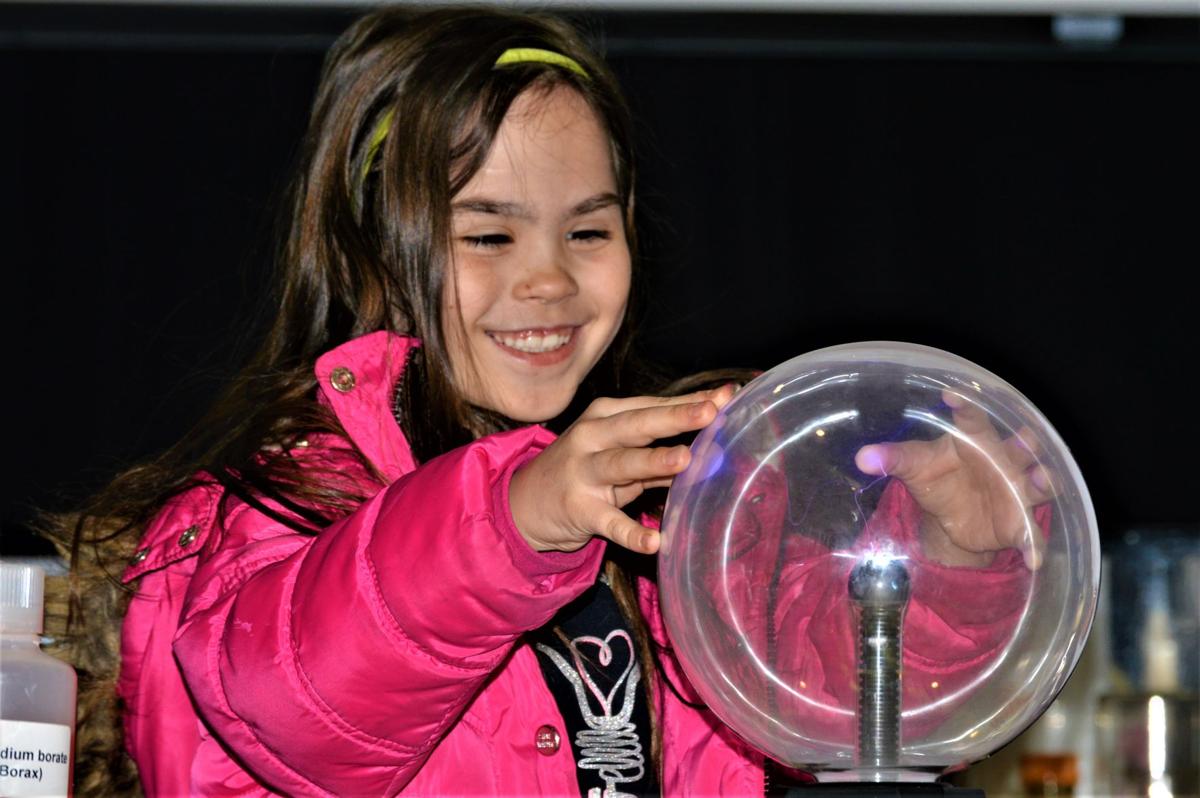 A young girl enjoys the plasma ball during the Astronaut Adventures program at the Air Force Academy Feb. 6. The day was full of mind-blowing scientific experiments, mesmerizing space visuals and inspiring life stories. 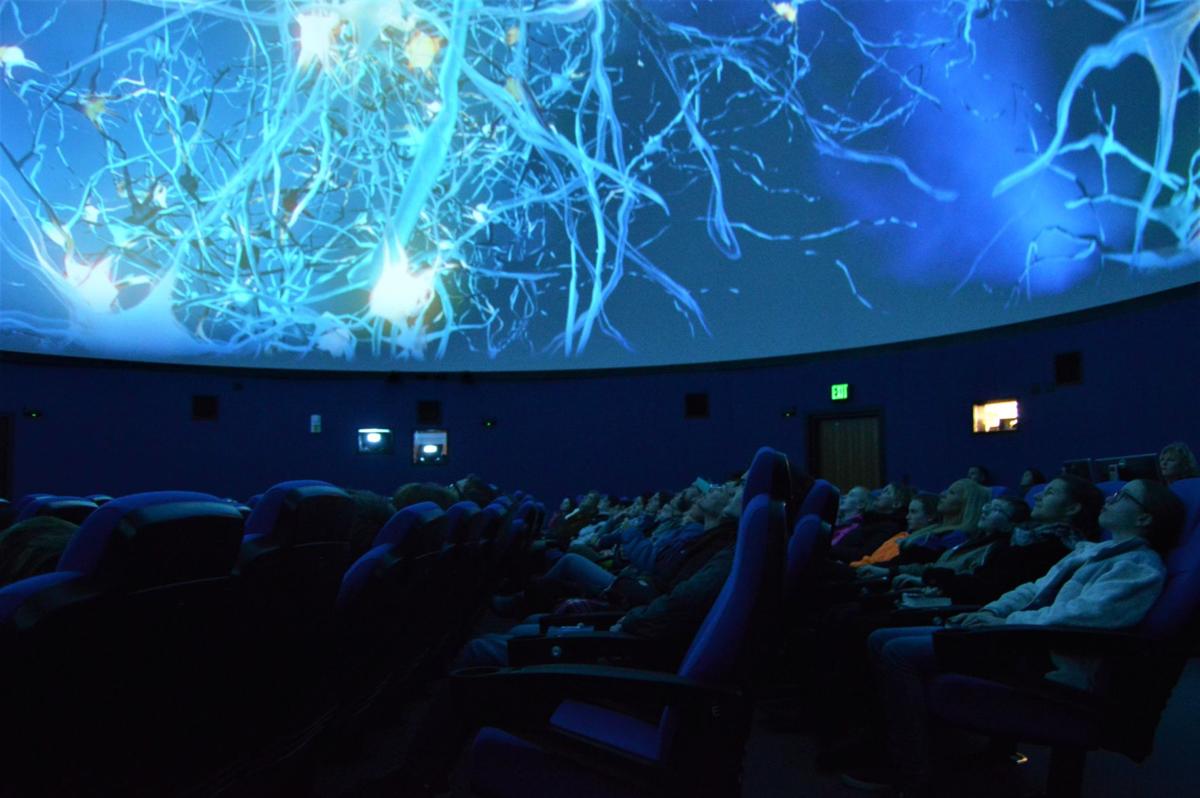 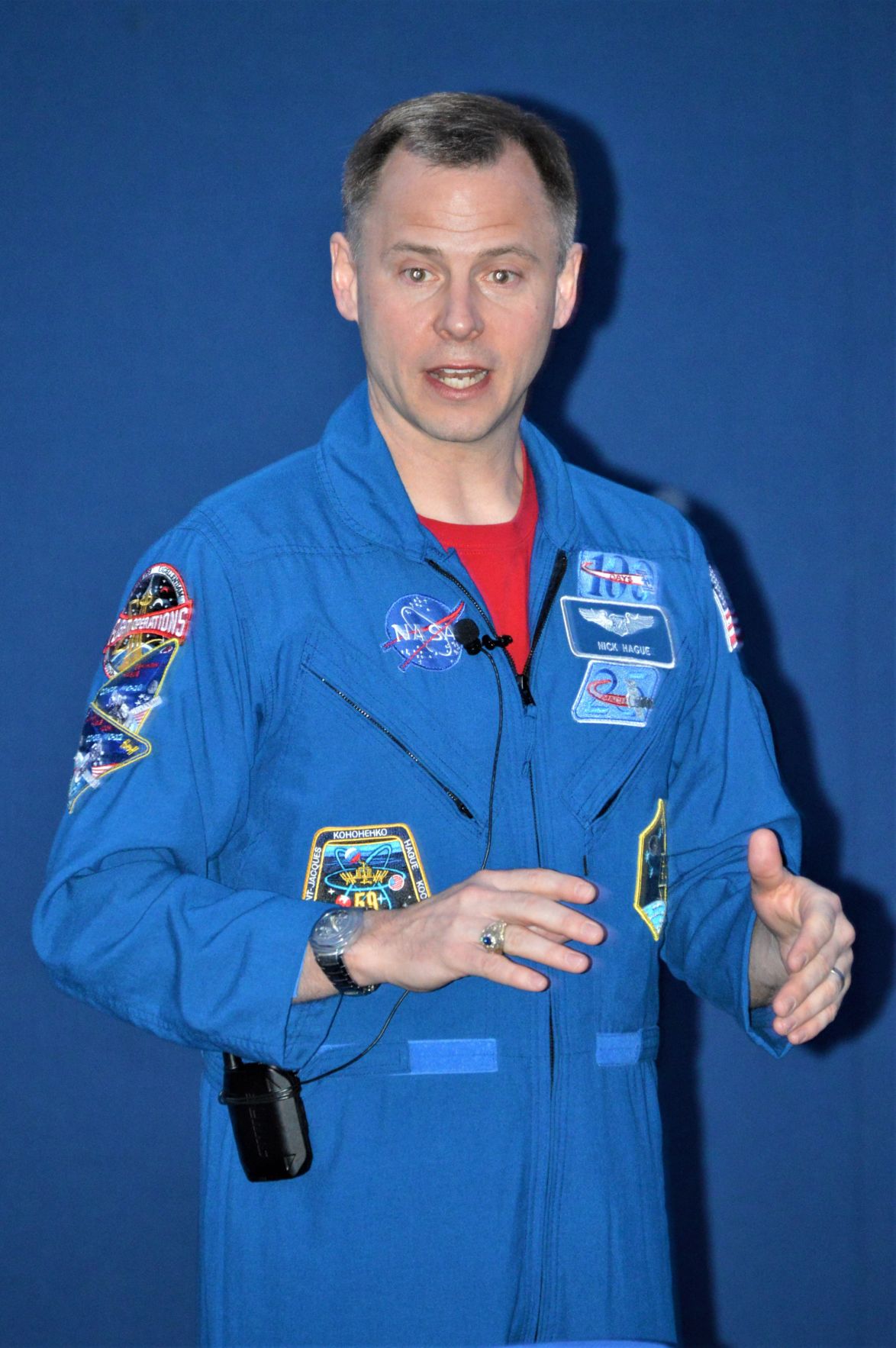 Col. Tyler Nicklaus "Nick" Hague, a 1998 Air Force Academy graduate, told the kids about space life and what it takes to get there. 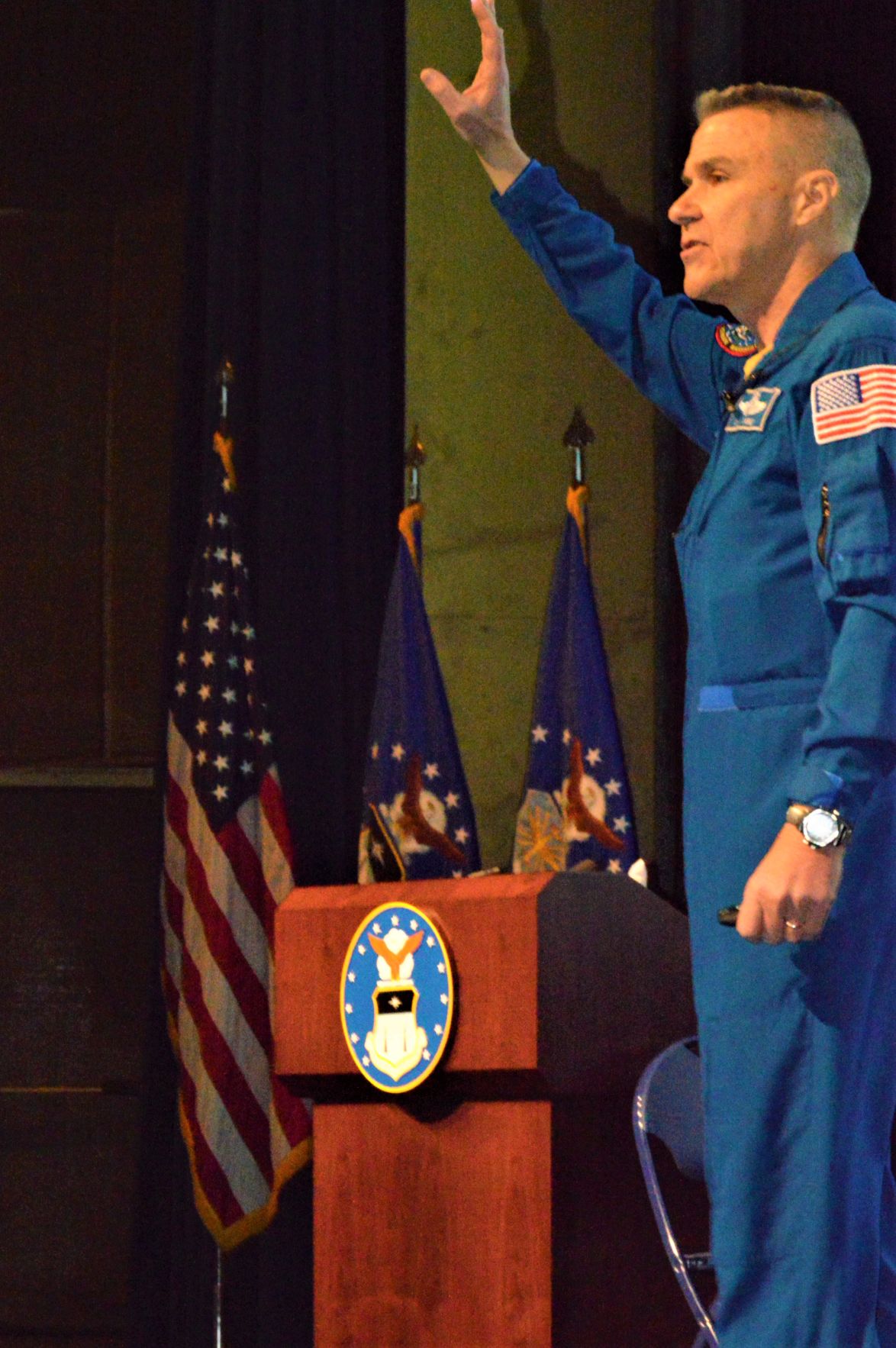 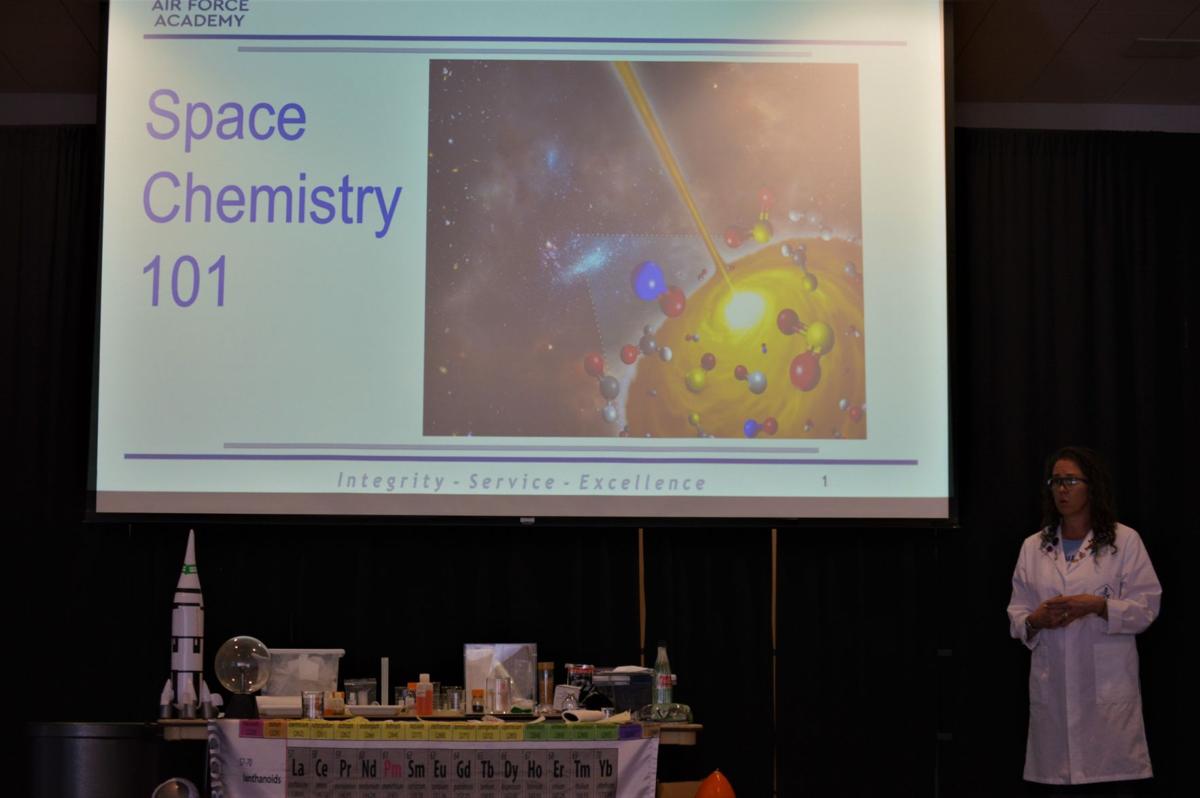 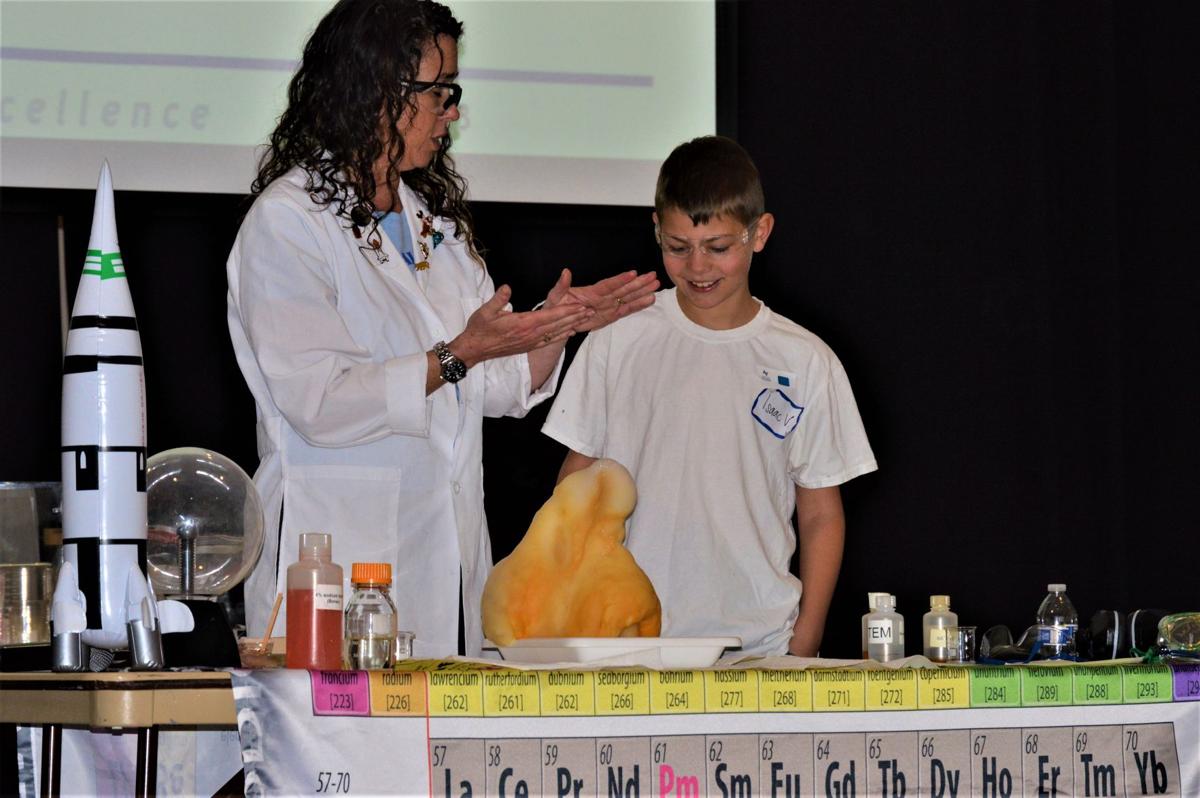 Col. Tyler Nicklaus "Nick" Hague talks about his work at the International Space Station at the Air Force Academy planetarium in Colorado Springs Feb. 6. He is an Academy graduate.

A young girl enjoys the plasma ball during the Astronaut Adventures program at the Air Force Academy Feb. 6. The day was full of mind-blowing scientific experiments, mesmerizing space visuals and inspiring life stories.

Col. Tyler Nicklaus "Nick" Hague, a 1998 Air Force Academy graduate, told the kids about space life and what it takes to get there.

“Is it weird going to the bathroom in space?” asked one of the hundreds of K-12 students who attended an Astronaut Adventures program at the Air Force Academy Feb. 6.

Water is not the only thing that floats in space, responded Air Force Col. Col. Tyler Nicklaus “Nick” Hague, who served on the International Space Station in 2019, told the curious boy. “We have to use a special toilet. It’s a lot like a vacuum. I’m going to gross you all out. We reuse it.”

Most of the 300 predominantly home-schooled students from the Pikes Peak region in attendance found his answer amusing, however.

Few people are more qualified to command the wonderment of children than astronauts. Retired Air Force Lt. Col. Duane G. “Digger” Carey and Hague, a 1998 Academy graduate, talked to more than 300 Pikes Peak region students gathered at the Academy’s planetarium and Arnold Hall about working in space and what it takes to get there.

The bathroom question gets asked a lot.

Hague went on to explain the expenses of transporting water to space. “We do what good people do, we recycle. We purify our pee and turn it back into drinking water. What was this morning’s coffee is tomorrow morning’s coffee.”

Another student wanted to know how food is grown in space. Hague explained how zero gravity affects water disbursement and root perfusion. In space, they must use other materials than dirt for plant growth.

“We’re trying to solve these problems so that you guys can walk on Mars,” Hague said. “I sat in the same seats you are in 20 years ago.”

The kids’ questions were perhaps inspired by the immersive planetarium experience that Hague presented. The viewer feels like he is floating in zero gravity aboard the International Space Station. The planetarium proves to be a very relaxing environment, with a cool blue hue and low-lit with reclining seats to watch the movie on the dome ceiling.

Students alternated between the Arnold Hall Theater, ballroom and the planetarium during the three-hour experience.

In another part of the program, Academy STEM instructor Stacey Lazzelle dispelled myths about astronaut ice cream and demonstrated the chemical engineering behind launching astronauts into space.

Although the chemical reactions wowed the kids, they were most eager to touch the plasma ball Lazzelle demonstrated. Two sisters who did came with their father, Tom Lynn, of Colorado Springs. The girls said that their favorite part of the day was the “magic” chemistry show.

In the theater, Carey told kids of how humans will be back on the moon in a couple of years, and from there will travel to Mars. He implored them to help conquer the space frontier.

Carey, who served as pilot of a Space Shuttle mission in 2002 for Hubble Space Telescope maintenance, said astronauts come from all different backgrounds.

He said he grew up in poverty in Minnesota. Carey didn’t like school and often didn’t attend, even failing science. He was planning to work a trade for the rest of his life but decided to change things. He told the kids that they can be anything they want to be.

Hague said that he feels compelled to share his space experiences with as many people as possible because so few have gone there. The more people who can understand what it is to see our planet as one entity, from high above, the more who will see the importance of our commonalities.

Our differences are not something that should split us apart, he noted. They are something that we should celebrate. We are, ultimately, a pale blue dot.

Space exploration draws us together, Hague pointed out. It’s evident in the collaborative space missions that bind us across the globe. People from different countries and backgrounds have an urge to explore. Hague said he wished he could take everybody up there with him so that they could get that perspective.

One boy asked Hague what the scariest thing was that happened to him on a mission. Hague spoke of the first time he attempted to launch into space. A rocket underneath him exploded and, after only a few minutes in the air, his team had to return to Earth.

Despite that initial failure, he said, he didn’t stop trying.

“Life throws some stuff at you,” he said. “It’s about how you respond to it. And so, 154 days later, I was strapped right back into the same type of rocket, right on the same launch pad, and launched into space. You can accomplish what your dreams are.”

Flying W Ranch to reopen in May after fire

The Flying W Ranch in Colorado Springs will reopen Thursday, May 21, after being ravaged by the Waldo Canyon fire in 2012.