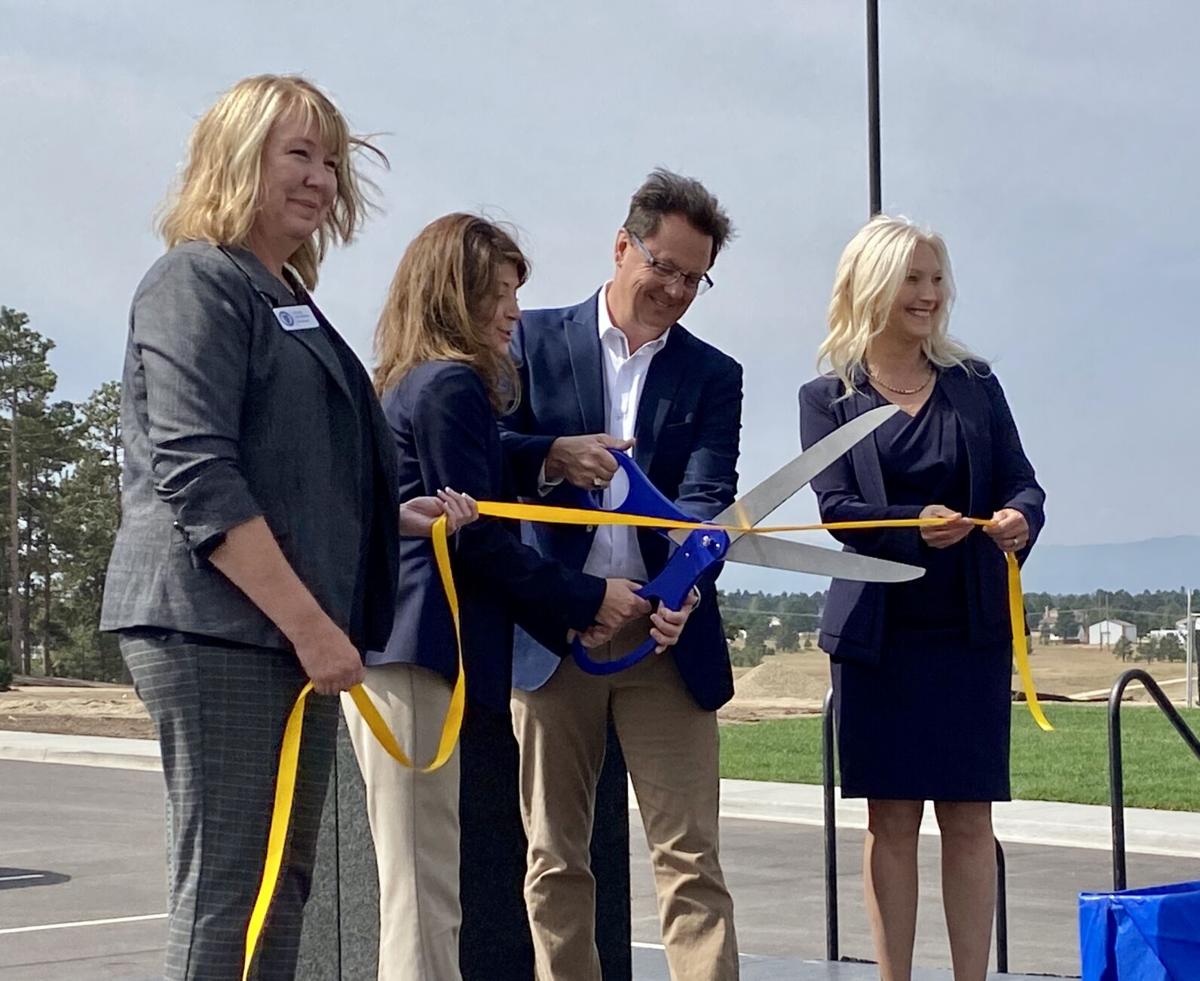 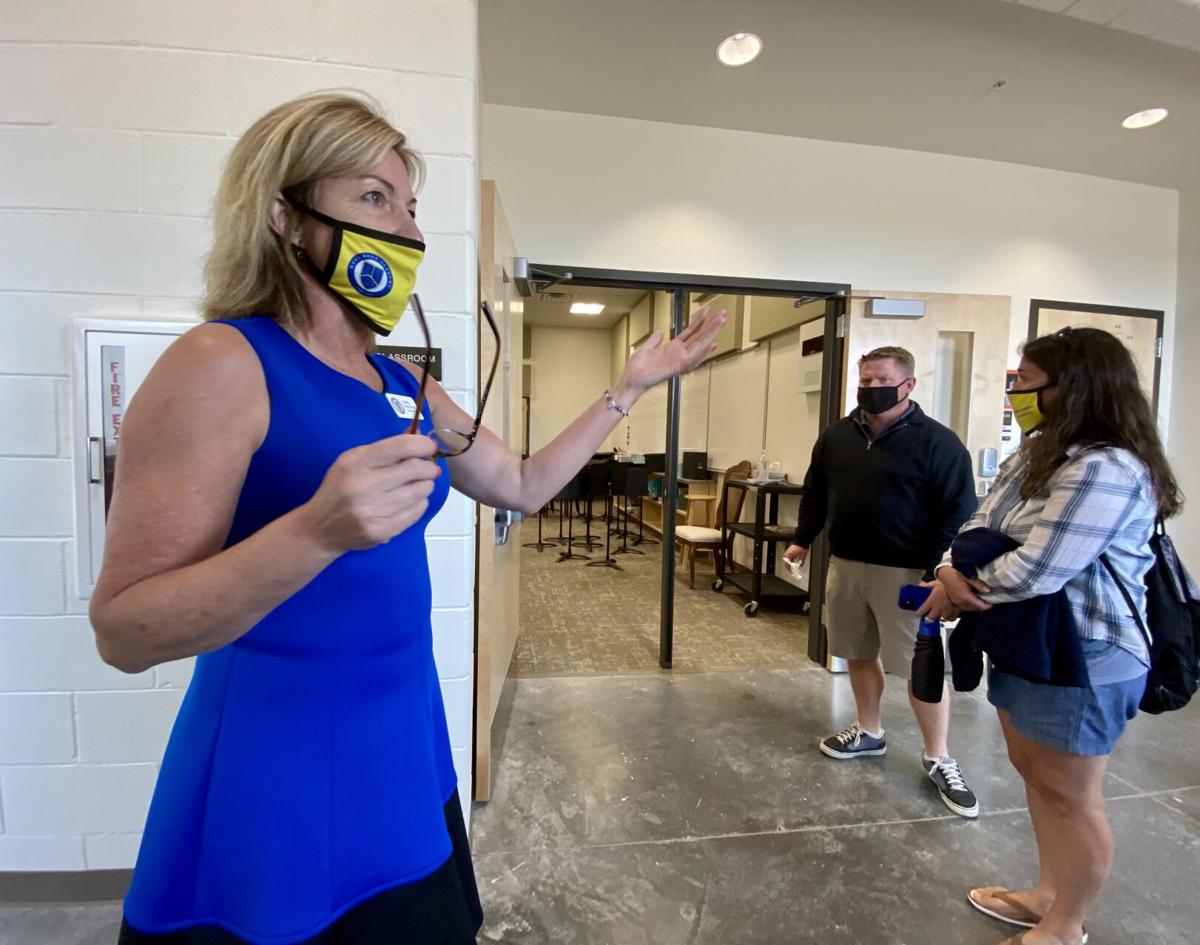 Monument Academy East Campus assistant principal Carol Skinner leads a tour through the newly completed building Aug. 29 in Black Forest after a ribbon-cutting ceremony in front of the school. 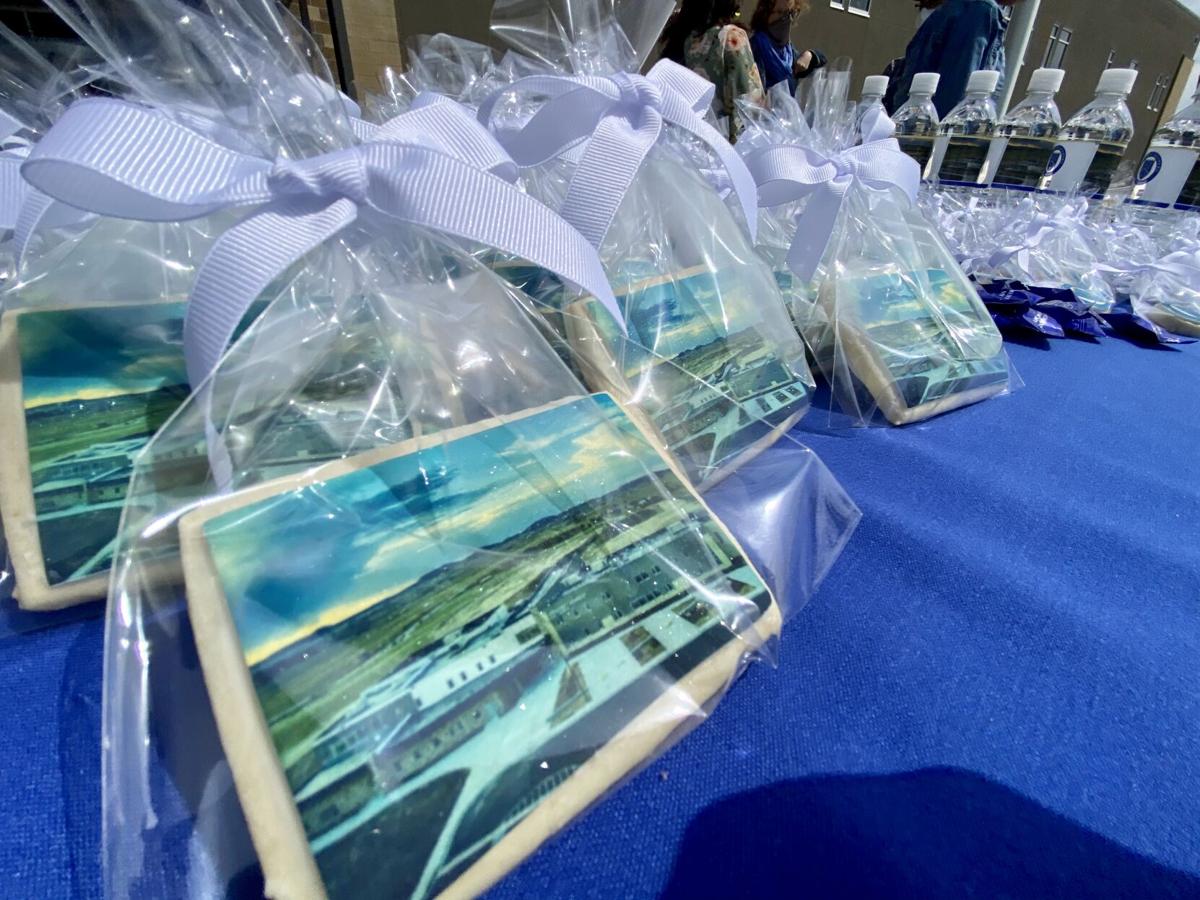 Cookies decorated with a drone photo of the newly completed Monument Academy East Campus were offered to attendees of its ribbon-cutting celebration. 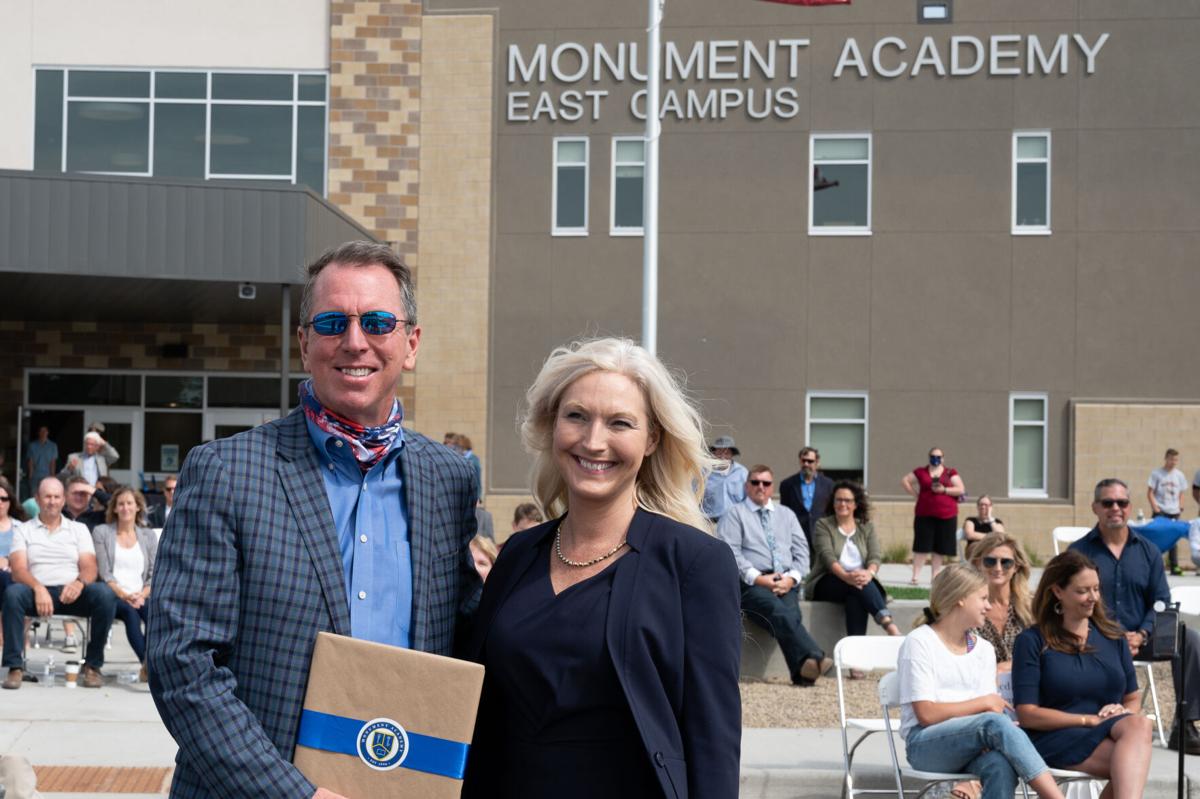 Monument Academy East Campus assistant principal Carol Skinner leads a tour through the newly completed building Aug. 29 in Black Forest after a ribbon-cutting ceremony in front of the school.

Cookies decorated with a drone photo of the newly completed Monument Academy East Campus were offered to attendees of its ribbon-cutting celebration.

BLACK FOREST • Almost 24 years after the original Monument Academy launched, construction on a second campus devoted to its middle and high school students has been completed.

“Like the establishment of Monument Academy a quarter of a century ago, this school build was not without its challenges and reflects the true testimony of the miracle that can arise from a people with a vision,” Herrera said.

She started with some background on charter schools in Colorado. In 1994, state representatives believed Colorado’s educational system was in need of healing and passed the Charter Schools Act. Today, this law is being challenged and is in jeopardy of being dismantled in the upcoming state legislative sessions, Herrera said.

The school, part of Lewis-Palmer School District 38, was founded in 1996 at 1150 Village Ridge Point as Lewis-Palmer Charter Academy and renamed Monument Academy in 2000.

“Monument Academy will never represent in large numbers,” she said. “It will host a specialized program and thrive in spaces created for light and creativity, supporting a variety of disciplines in visual and performing arts, music, art including ceramics and sculpture, science, engineering, media and graphic design, hands on learning and mentorship and leadership training, and with the completion of the second phase (of east campus), culinary arts. And we are just getting started.”

Herrera noted the challenged the east campus project faced, from weather-related construction delays to the COVID-19 pandemic. She said over the past year the Monument Academy community, staff, students and families have been able overcome these challenges, create new solutions and support one another through the unknown.

“In the face of difficulty, Monument Academy’s people rose to embody all that MA has stood for these many years by displaying strength and the best part of our humanity at, for some, great cost in the midst of adversity,” Herrera said. “May our students today and the thousands who will pass this threshold in the future be greatly blessed.”

Lewis-Palmer School District D-38 superintendent Dr. KC Somers and board of education secretary Tiffany Upchurch, who serves as district liaison to the Monument Academy board, were among those to address attendees. They both spoke of continuing to cultivate a strong partnership at the charter school. Somers noted his respect for Herrera and the MA staff in “weathering a storm which goes beyond building a school but also doing it during a pandemic.”

“Partnering together makes our community better and the value of our education better,” Upchurch said.

“It is the parents’ right and responsibility to direct the education of our children,” Lundeen said. “When that is challenged, it creates a risk of perishing our society.

“At the end of the day, it’s about these students and how we greet them at the door.”

Newly appointed Monument Academy board president Melanie Strop gave accolades of the developers, architects and builders involved in the $27 million east campus building project. She lauded JHL Constructors who were the “boots on the ground” for the project.

Mark McWilliams, the previous MA board president, spoke of how humbled he was to see what had been achieved over the past year. He noted the building project at one time was over a month late in its production schedule but somehow managed to finish phase one not only on time, but early.

Every day, there was “a miracle” to keep the project moving forward, he said, and it was the community’s passion for classical education, prayers and encouragement which helped realize the 10-year vision for the school.

East campus principal Julie Seymour also expressed her gratitude to those involved before inviting the audience on tours of the new 55,000-square-foot facility, in small groups.

One wing houses sixth-, seventh- and eighth-graders, and the other has a gymnasium and classrooms for high school students. This school year is the first time Monument Academy is offering high school instruction. School leaders previously said they anticipate 600 students on campus with all four grades, with room to grow to 1,000 students.

With the new facility’s opening, the Village Ridge Point campus is now solely an elementary school.