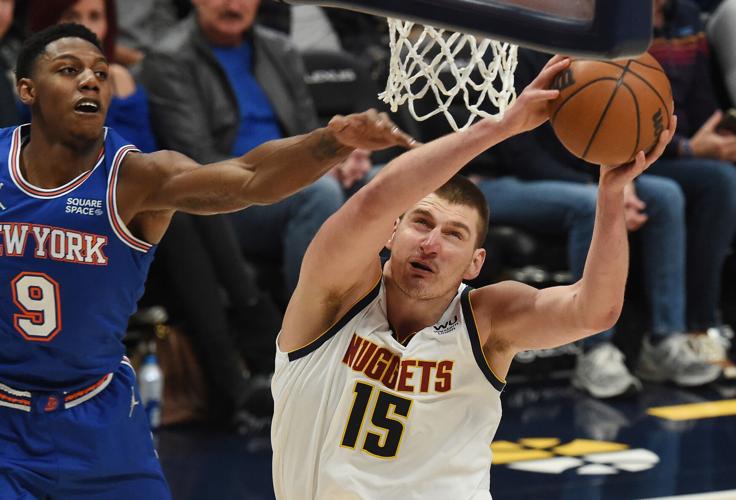 Nuggets’ center Nikola Jokic goes up for a shot while being defended by Knicks’ forward RJ Barrett during the third quarter of a game at Ball Arena on Tuesday, Feb. 8, 2022. The Nuggets defeated the Knicks 132-115. (Photo by Jerilee Bennett, The Gazette) 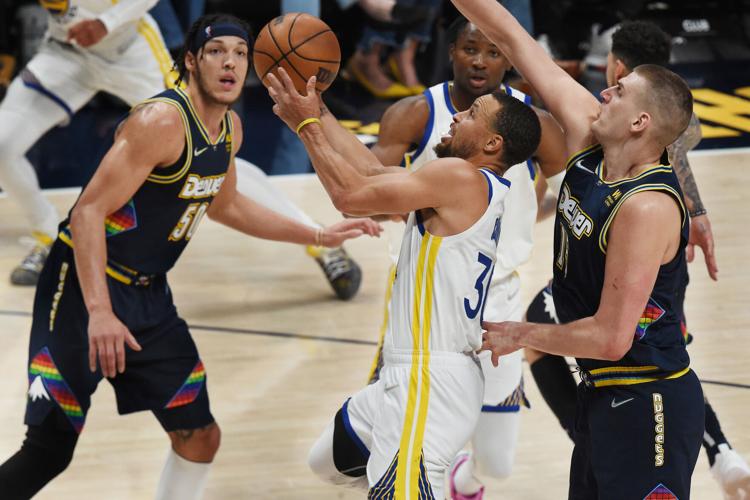 Nuggets Nikola Jokic puts pressure on Warriors Steph Curry during the second quarter of game 4 of the first round of the playoffs at Ball Arena on Sunday, April 24, 2022. The Nuggets defeated the Warriors 126-121. (Photo by Jerilee Bennett, The Gazette)

Denver Nuggets center Nikola Jokic gestures after hitting a 3-point basket against the Golden State Warriors in the first half of Game 4 of an NBA basketball first-round Western Conference playoff series Sunday, April 24, 2022, in Denver.

Nuggets’ center Nikola Jokic goes up for a shot while being defended by Knicks’ forward RJ Barrett during the third quarter of a game at Ball Arena on Tuesday, Feb. 8, 2022. The Nuggets defeated the Knicks 132-115. (Photo by Jerilee Bennett, The Gazette)

Nuggets Nikola Jokic puts pressure on Warriors Steph Curry during the second quarter of game 4 of the first round of the playoffs at Ball Arena on Sunday, April 24, 2022. The Nuggets defeated the Warriors 126-121. (Photo by Jerilee Bennett, The Gazette)

There are those in and surrounding the NBA who are suffering from MVP Envy.

Not only will Nikola Jokic win the league’s most prestigious regular-season award back-to-back and front-to-front, he soon will sign the richest contract in basketball history — $254 million over five years.

And SuperSerb also has a legitimate chance to become only the fourth player ever as the Most Valuable Player in three consecutive seasons, joining Bill Russell, Wilt Chamberlain and Larry Bird.

Deal with it, Joel, Giannis, Ja, Jayson and Luka.

Joker is the Ace again.

Thirty-eight picks later, the Nuggets picked a center, too, but nobody saw or knew who he was. Televising the draft, ESPN cut to a commercial when the 41st choice in the second round was announced. Instead, the national TV audience learned all about Taco Bell’s "quesarito."

The crowd at the Barclay’s Center in Brooklyn on June 26 heard the name of an unknown foreign player, and it was pronounced at the podium incorrectly.

Meanwhile, six hours ahead on the clock, Nikola was at his family’s house in Sambor, Serbia. “To be honest, I was sleeping,’’ he told ESPN’s Rachel Nichols last year. “My brother called me, and he was partying, opening champagne. He was in New York at the time. I was like “Come on, bro, I’m sleeping.’ At the moment I didn’t even think it’s a big thing ‘cause I never imagined coming (to the United States and the NBA).’’

He certainly has arrived.

As a youth, Jokic dreamed more of growing up – he already was a big, fat kid – to be the world’s tallest, heaviest harness racing jockey or a water polo player. On draft night he was 6-foot-11 and weighed about 285 pounds. He loved to drink at least a gallon of Coca-Cola daily. When he did come to America, he told Nichols, he described himself as the “worst body, worst-conditioned player in the NBA.’’

A couple of days after the draft I reviewed films of Jokic playing in the Adriatic League as a teenager and thought he was a giant among boys from Gulliver’s fictional land of Brobdingnag who couldn’t jump, run or play defense — but could shoot and understood how to play the game.

Jokic reminded me of Efthimios Rentzias, a 6-11½, 260-pound center from Greece who was drafted by the Nuggets in 1996 at 23rd. He never came to Denver. His rights were traded to the Hawks, who sent him on to the 76ers. Rentzias eventually would play in Philadelphia for just 35 games, averaging 0.7 rebounds and 1.5 points before being cut and returning permanently to play in his country.

Obviously, Nuggets executive vice president/general manager Tim Connelly and assistant Arturas Karnisovas believed in Jokic. He was invited to the 2015 NBA Summer League in Las Vegas and impressed the Nuggets. He signed a deal.

The Nuggets turned over a rock and found a hope diamond.

The mysterious young man from Serbia finished third in 2015-16 in the rookie of the year balloting. Three years after, “The Joker,’’ as he was nicknamed, was voted to the All-Star team and first-team All-NBA. Nikola not only became an exceptional player, but one of the best big men in the annals of the NBA because of shooting, rebounding, passing, steals and blocks.

He is a triple-double waiting to happen every night and will surpass the incredible Chamberlain for most all-time triple-doubles by a center. Jokic leads all positions in that unique combination and distinction.

ESPN and TNT never interrupt for a commercial when Jokic is getting the rebound, leading the break, throwing a pass or shooting a rainbow three-pointer, a one-legged jumper, a right-handed sweeping hook or a lane-driving layup.

PGA Tour event may return to Colorado in 2024

Everybody who plays or follows basketball certainly distinguishes Jokic, especially after an NBA-record season of 2,000 points, 1,000 rebounds and 500 assists.

The NBA’s MHS (Most Humble Superstar) fused with them in 2021 and will exceed all the Colorado legendary players with two MVPs later this week.

Some, but not the highest number of voters, NBA disagree.

Nikola Jokic is the deserved chosen 1.

The TNT crew tracked down Nikola Jokić in his native Sombor, Serbia to award Denver’s star center his second consecutive Most Valuable Player …