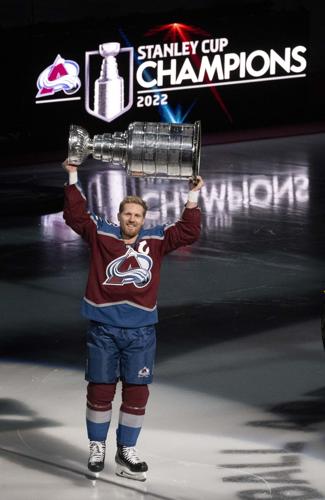 Colorado Avalanche left wing Gabriel Landdeskog skates with the Stanley Cup during the celebration before the Avalanche’s season opener against the Chicago Blackhawks Wednesday, Oct. 12, 2022, at Ball Arena in Denver. (The Gazette, Christian Murdock) 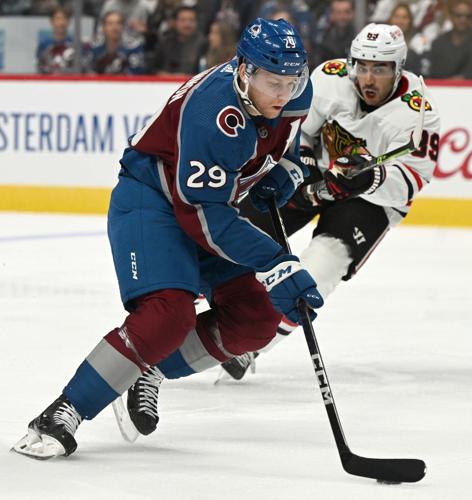 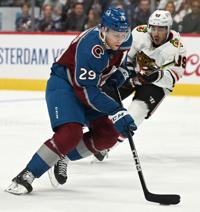 Colorado Avalanche left wing Gabriel Landdeskog skates with the Stanley Cup during the celebration before the Avalanche’s season opener against the Chicago Blackhawks Wednesday, Oct. 12, 2022, at Ball Arena in Denver. (The Gazette, Christian Murdock)

From the lap finally taken to the final result the Stanley Cup Champions III Colorado Avalanche were Fire On Ice in the Grand Opening.

Paul Klee: Avs will repeat as Stanley Cup champs if Nathan MacKinnon has the same drive

After hockey’s hallowed holy grail was carried onto the red carpet to a table at mid-rink, convalescing captain Gabe Landeskog hoisted the trophy of 35 ¼ inches height and 34 ½ pounds weight and skated the victory circle that the Avs fans never got to experience at home last season.

The Avalanche were crowned at the end of Game 6 of the NHL Final on June 26, 2022, in Tampa against the Lightning. It was the second time the Colorado franchise won the title in Florida. The Avs defeated the Panthers for the fourth consecutive Final game in Miami on June 10, 1996. The Avalanche won their other championship at The Can in Denver in Game 7 on June 9, 2001, against the New Jersey team formerly known as the Colorado Rockies.

The Avs are prohibitive preferences to be back in the Chalice Championship series in June of 2023.

Based on Wednesday night’s imposing 5-2 triumph over the Blackhawks, the Avalanche still are on the rush.

And they did it without Landeskog, who is being held off because of “a lower-body’’ injury, which, in translation, is recovery from knee surgery last season (even though he played through it throughout the postseason).

Gone are goalie Darcy Kuemper, tough guy Nazem Kadri and playoff contributors Andre Burakovsky and Jack Johnson, who fervently participated in the pre-game celebration despite being with the Blackhawks.

However, the Avalanche have more than enough talent left to produce, as the Eurythmics might suggest, “Here comes the reign again’’. Start with Nathan MacKinnon, who agreed to the most expensive contract in the NHL – an eight-year extension for $100.8 million. The Avalanche also signed Valeri Nichushkin for eight more seasons, Artturi Lehkonen for five and Andrew Cogliano for another year.

Although he had several opportunities, center MacKinnon didn’t score, but he assisted on two goals. But, get this from the three wingers who accounted for all the Avs goals: Cogliano scored the first of the game; Nichushkin scored twice, and Lehkonen finished with two goals and an assist. All four certainly are paying for themselves.

Then, there’s winger Mikko Rantanen, who has a six-year deal with the Avs. He was credited with four assists.

And all Cale Makar did last season was win the Norris Trophy as the best defenseman in the league and the Conn Smythe as the playoffs’ Most Valuable Player. He turns only 24 on Oct. 30, but already has a six-year, $54-mil contract.

Makar ended up with four shot attempts and two assists in the opener and, as usual, led the Avalanche in minutes played (24:06) and virtually led every power play attack. He returned to hometown Calgary Thursday night for the Avs’ second game vs. the Flames.

The Avs’ top pair of 21-year-olds who share an apartment – center Alex Newhook and defenseman Bowen Byram – are comers this season.

Alexander Georgiev, The Goalie, won his first game with the Avalanche. He wasn’t pressed most of the evening, with only 17 shots on his property, but he didn’t allow a goal in even strength, giving up two on Chicago power plays. He was acquired in the off-season from the Rangers to replace Kuemper. Yet, one of the most rousing reactions from the 18,000-plus at Ball (Puck?) Arena during the Avs’ introductions was for the other goalie – Pavel “Postseason’’ Francouz. As the substitute for an injured Darcy he would go 6-0. During the regular season he had a 15-5-1 record. Pavel will play. He’s got a two-year deal for $4 mil.

Although Joe Sakic was promoted from general manager to president of the Avalanche in mid-July, he always will be the King of Hockey in Colorado. His assistant Chris Farland now is GM. The two don’t skip a beat.

The Avs’ refrain must be: “Repeat The Feat.’’