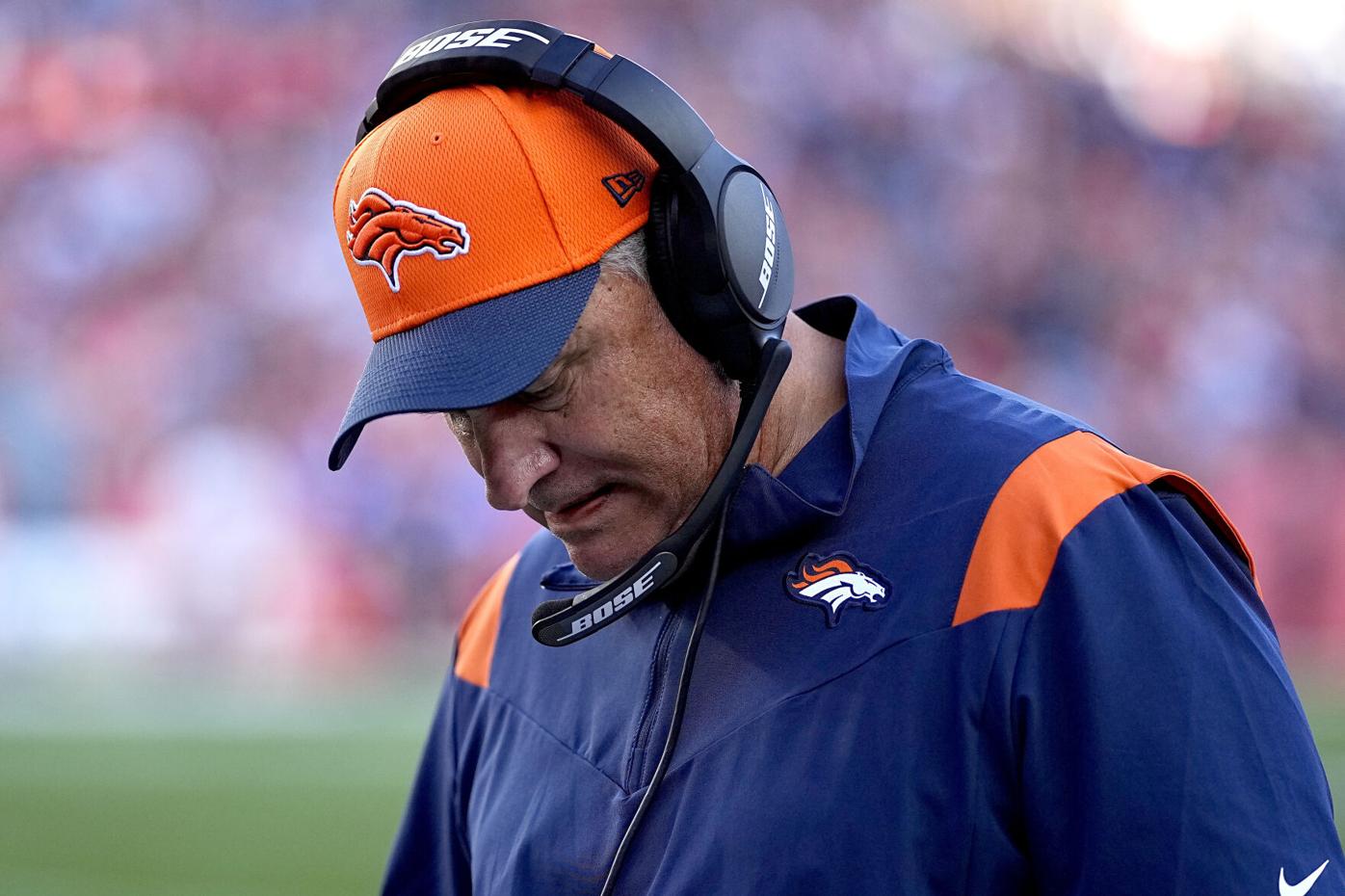 Denver Broncos head coach Vic Fangio walks the sidelines during the second half of an NFL football game against the Las Vegas Raiders, Sunday, Oct. 17, 2021, in Denver.

Denver Broncos head coach Vic Fangio walks the sidelines during the second half of an NFL football game against the Las Vegas Raiders, Sunday, Oct. 17, 2021, in Denver.

While George Paton has a demanding dilemma in regard to the Broncos head coach, Vic Fangio declares he deserves the job next year “absolutely’’.

Which means “without qualification, restriction or limitation.’’

So, based on Fangio’s first response Monday, he believes the general manager, the president of football operations and the CEO have no choice except to retain him.

However, Vic did retreat somewhat, saying: “But do I acknowledge that (firing) is out there and could happen to me? Absolutely. But do I worry about it? I absolutely do not worry about it for many, many reasons.’’

Fangio is maintaining an Alfred E. Neuman attitude of “What, me worry?’’

He should be concerned, and he doesn’t unequivocally warrant a fourth season.

Even now, Paton, Joe Ellis and John Elway must be contemplating a decision between firing and keeping Fangio.

Valid reasoning exists on both sides of the issue.

Most critical is: Can the top two executives whose contracts end in January and expect to depart and a general manager finishing his first year commit long-term to a new coach without approval of new ownership sometime in the next year?

New owners generally want their Own Man as coach. One of the Broncos’ past two new owners, Edgar Kaiser Jr., fired coach Red Miller a month after taking control in March, 1981, while the next, Pat Bowlen, who bought the Broncos in March 1984, stayed with Kaiser’s selection, Dan Reeves, until firing him after the ’92 season.

In 2022 Fangio would be in the final season of a four-year contract (although the original agreement included a fifth-year franchise option). If Fangio is fired, he will be due $5 million. If he continues, Vic will be a lame-duck coach (a situation he said Monday he would accept). In ’21 the Broncos have completed paying off former coach Vance Joseph’s pact.

Ellis has been involved in the hiring of five coaches and essentially fired two head coaches. Elway principally hired four coaches and fired two. (Gary Kubiak resigned). Ten of the Broncos’ previous 16 head coaches (including interim coaches) didn’t last until a fourth season. Fangio could match Miller and John Fox if he comes back.

Broncos' Week 17: What you need to know before their matchup against the Chargers

On the positive flank Fangio has been one of the three most efficient defensive coaches in Broncos’ history – with Wade Phillips and Joe Collier. The Broncos are tied for No. 1 in the NFL in points allowed (260) and rank sixth overall on defense. Vic is respected by the majority of players, Broncos’ assistant coaches, front office staff and media. He still has a slight chance of being only the eighth Broncos coach to win nine games in a season. Specially, Fangio has managed his players extremely well considering the COVID-19 protocol losses and injuries at linebacker, in the defensive and offensive lines and at cornerback.

On the negative wing the Broncos have the 10th lowest point total (298) and rank 19th overall in offense. Fangio has a 19-28 record. His special teams are next-to-last in the league, and his choices for offensive coordinator and special teams coach have been poor. The Broncos have been horrendous in mid-game adjustments on offense. Fangio’s three-season record when the Broncos are losing at halftime is 1-22, and his clock, timeout and replay challenge supervision throughout games, and especially near the end of halftime and games, has been sketchy.

Woody Paige: 'What a waste' by the Broncos. How GM George Paton can start cleaning up the mess.

The Broncos’ loyalty outside of Dove Valley has diminished notably. With one home game remaining, 46,556 season-ticket owners have been no-shows – and didn’t or couldn’t sell – in the past five games.

And the Broncos’ have only a miniscule miracle chance at the playoffs.

Paton certainly admires Fangio, as he asserted when he became general manager, because of their past duels in the Viking-Bears NFC North, and the GM must appreciate that the coach was acceptable to the mid-season trade of Von Miller, and Paton supported Fangio’s decision just before the season to start Teddy Bridgewater at quarterback.

Fangio certainly admires Paton, saying Monday they “have a great relationship . . . One of the best assets the Broncos is George Paton . . . I think this guy is great at his job, and he’s going to continue to be great at his job.’’

Perhaps, then, Fangio already has received assurance from Paton that he will return as coach.

DENVER • Broncos coach Vic Fangio said he is not worried about his job status, with two games remaining this season and Denver being all but o…