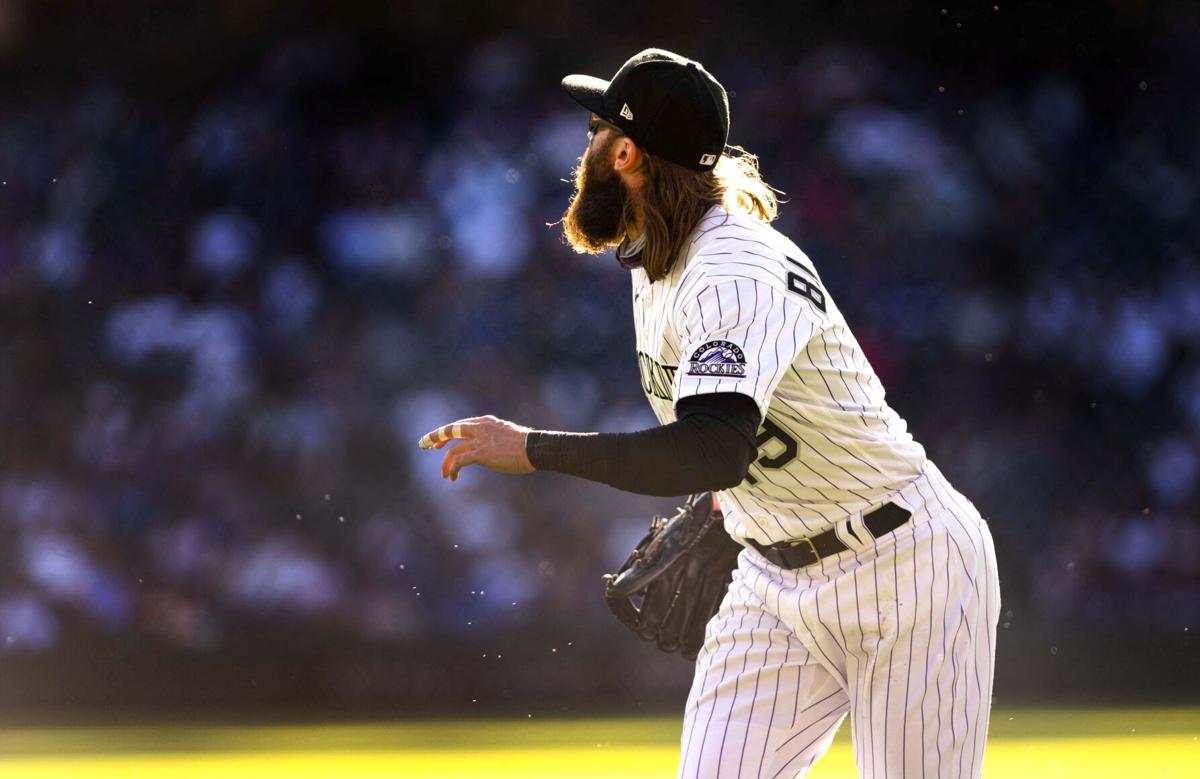 Colorado Rockies right fielder Charlie Blackmon (19) drops back to make a catch in right field during the eighth inning of the Colorado Rockies 2021 season opener against the Los Angeles Dodgers April 1, 2021, at Coors Field in Denver. (The Gazette, Christian Murdock) 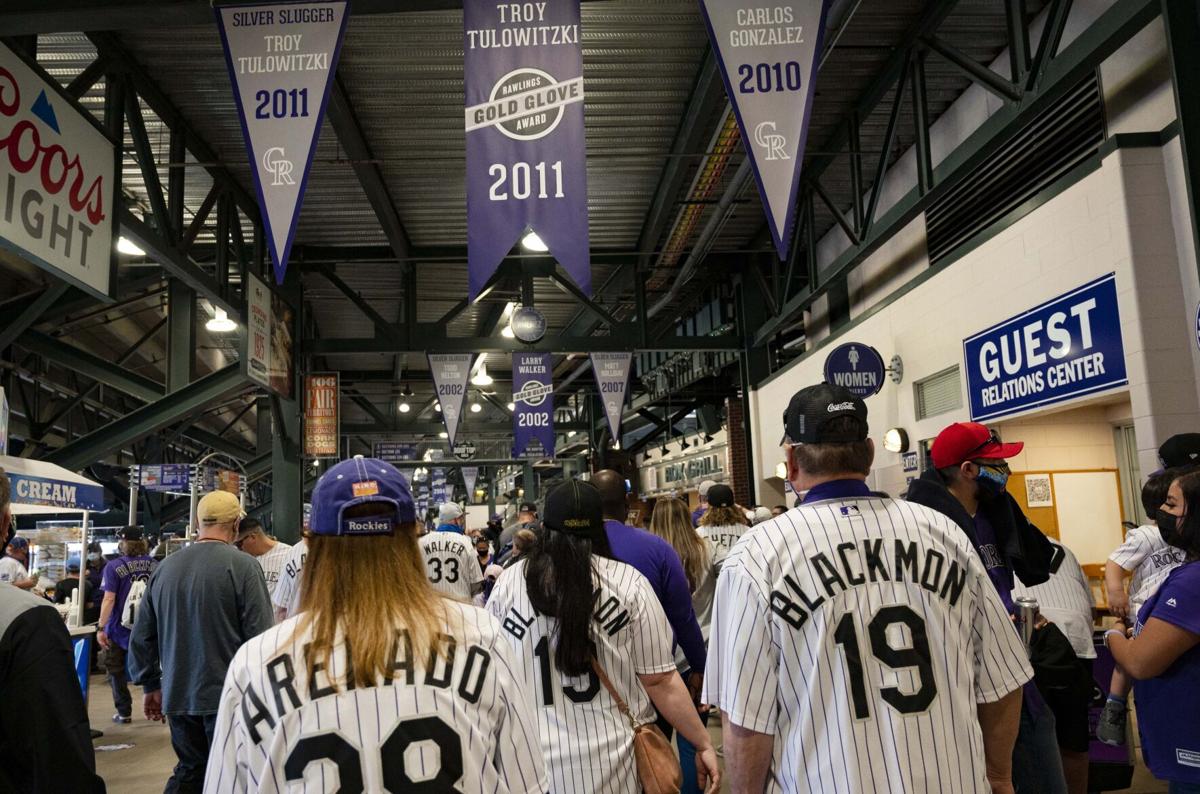 A fan wears a Nolan Arenado jersey as she walk around the concourse at Coors Field before the Colorado Rockies 2021 season opener against the Los Angeles Dodgers on Thursday in Denver. The Colorado Rockies traded their All-Star third baseman to St. Louis over the winter.

Colorado Rockies right fielder Charlie Blackmon (19) drops back to make a catch in right field during the eighth inning of the Colorado Rockies 2021 season opener against the Los Angeles Dodgers April 1, 2021, at Coors Field in Denver. (The Gazette, Christian Murdock)

A fan wears a Nolan Arenado jersey as she walk around the concourse at Coors Field before the Colorado Rockies 2021 season opener against the Los Angeles Dodgers on Thursday in Denver. The Colorado Rockies traded their All-Star third baseman to St. Louis over the winter.

The weird Wild West Show in LoDo on a postcard-perfect Thursday afternoon metamorphosed into the Rockies’ Grand Reopening.

With real people in the ballpark for the first time since Sept. 29, 2019, the Dodgers acted as the April fools as the Rox played like the champs.

So, which team is supposed to win more than 100 games and the other is predicted to lose almost 100?

Scoring two runs in four of eight innings by a myriad of means and ways, the Rockies racked the quarter-of-a-billion-dollar bunch from La-La Land.

This game shall live in opening-day legend for the Rockies — as Eric Young’s home run in the franchise’s first at-bat in history in 1993 and Dante Bichette’s walk-off home run in the 13th of the Coors Field inaugural game in 1995.

The Rox’s resplendent victory was generated against the team that triumphed in the past World Series and is expected to repeat, against the pitcher who will be a cinch Hall of Famer, vs. a lineup of MVPs, Cy Young winners, rookies of the year and All-Stars all over the dugout.

At spring training local hero and Rockies’ starting pitcher Kyle Freeland said: “Being an underdog means being someone the general public doesn’t think is going to perform at all, so I think, as a whole team, we’re using that as a chip on our shoulder to push us to shock the world and prove the doubters wrong.’’

Freeland only could watch Thursday. He has a shoulder injury and probably won’t pitch until June. But Freeland was smiling.

The Rockies have a boulder on their shoulder.

The swaggering Dodgers were staggering. They seemed reminiscent of the 1904 Brooklyn team that lost 104 games or a beer league softball farce.

Centerfield Cody Bellinger hit a home run that didn’t even count because third baseman Justin Turner was running the bases backward. Shortstop Corey Seager let a bunny go through his legs. Reliever Jimmy Nelson threw two wild pitches that provided the Rockies with two runs and got his catcher Austin Barnes injured. Right field, where Mookie Betts was stationed, was where a triple went to live.

The Dodgers were 3-16 with runners in scoring position, left 14 marooned and couldn’t score more than one run when Rockies’ struggling starter German Marquez permitted six hits and six walks in the first three innings.

Then there was Clayton Kershaw, one of the premier pitchers in baseball now and forever. He was a garden-variety plant on the mound Thursday as the Rockies put up 10 hits and six runs and struck out only twice against the lefty.

The Dodgers couldn’t have beaten the Hartford Yard Goats, the Rockies’ AA affiliate.

Meanwhile, the Rockies sacrificed, scratched, stole bases and solved the Dodgers, and scorched on defense with three double plays and as many spectacular plays.

Marquez hung on valiantly for four innings and 92 pitches, mostly four-seamers in the high 90-mile-per hour range, and remained calm even as plate umpire Bill Welke apparently became very confused about the strike zone. Most often Welke would call a ball on a pitch on the fringe and then signal strike on the next pitch in the same spot. Maybe he’ll be better off at third Friday. But, then, perhaps not.

All four umpires obviously were baffled on Bellinger’s opposite-field shot to left in the third. Turner was on first. Raimel Tapia raced to the padded wall, jumped and caught the ball — for a millisecond. It bounced out of his glove and into the stands.

The crowd of 21,000, the players in both dugouts, the two managers, millions watching nationally on ESPN, the umpires and, especially, Turner were clueless. After rounding second, Turner recrossed the bag, then raced back to first as Bellinger was heading in the opposite direction. Turner believed the ball was caught. Bellinger was circling his finger to indicate home run.

The umpires didn’t know. Finally, after a conference, they decided, without public explanation, that Bellinger was given a single and an out for passing a teammate, and Turner was awarded a run, which is odd, but in an obscure section of the rulebook.

That moment was the turning point, and the Rockies’ victory was an exclamation point. And, for a day, all the furious fans were thrilled.

It was just one game, but, oh, what an opener!

On opening day at Coors Field, a Rockies fan trolled owner Dick Monfort with a "FIRE BRIDICH" t-shirt. But Paul Klee says our guy should aim higher: SELL. THE. TEAM.