Denver Nuggets head coach Michael Malone, left, guides center Nikola Jokic to the bench after Jokic was involved in an altercation with Miami Heat forward Markieff Morris in the second half of an NBA basketball game Monday, Nov. 8, 2021, in Denver. Jokic was ejected for his part in the incident. 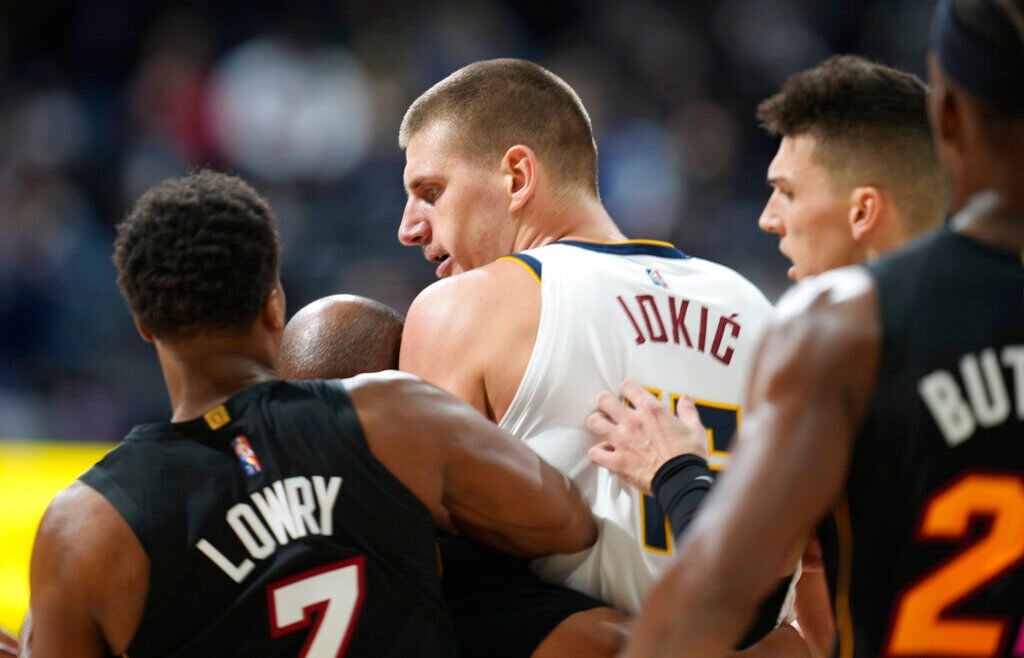 Denver Nuggets head coach Michael Malone, left, guides center Nikola Jokic to the bench after Jokic was involved in an altercation with Miami Heat forward Markieff Morris in the second half of an NBA basketball game Monday, Nov. 8, 2021, in Denver. Jokic was ejected for his part in the incident.

Who you got in Wrestlemania 38 – the Uso tag team twins, the Jonas Brothers, the Morris twins or the Jokic Bros.?

Nikola Jokic must be aware he is the reigning MVP in the NBA, not the UFC.

The Joker deserves a suspension for his raw, excessive retaliation Monday night. Basketball’s Best Big will have to accept the punishment for his second ejection from the past 11 games he’s played, and realize he’s the persistent target for every cheap-shot player, flop phony and asinine intimidator in the game.

The Serbian Steed must turn the other cheek, knee, elbow, rib and way.

As tremendous as Nikola was last season, he could be just as proficient and more efficient this year. He averaged 26.4 points, 10.8 rebounds, 8.3 assists, 56.6 percent on two-point attempts and 38.8 percent beyond the arc, with 1.3 steals and 0.7 blocked shots.

Jokic is a one-man wrecking crew, blocking shots at buzzers for victories, getting the Nuggets back into leads after the second unit repetitively falters, and running the floor as a point center, shooting guard and small center wrapped in one.

He’s a challenger for back-to-back MVP awards despite an NBA laden with superstars. Kevin Durant and James Harden are healthy again; Steph Curry has scored 50 twice and is averaging almost 28; Chris Paul is at 11.3 in assists, and Rudy Gobert is pulling down 16.1 rebounds a game.

But only Jokic can do all three at virtually the same time.

If he doesn’t get hurt or kicked out.

The Joker has to be The Ace with Jamal Murray still sidelined for months, and Michael Porter Jr. uncertain for the “foreseeable future,’’ according to Michael Malone.

The Nuggets’ coach is trying to remove some of the stress from Jokic, but, actually, there’s more on him.

Which is why Nikola can’t be doing Stupid Human Tricks and be baited into reactions from basketball goofballs.

Both have a goon reputations in the NBA while playing for a combined 13 teams (including the Suns together) and one spending a day with the Pelicans and the other spending time with the Rio Grande Valley Vipers. They are journeymen who raise a ruckus wherever they go, and generally are gone soon. One bounced a ball off the forehead of a defender; one threw a towel at his coach and was suspended by his own team; another started skirmishes with the Mavericks and the Nuggets in playoff series; both are technicals and ejections waiting to erupt.

You can’t tell them apart.

They start something, then flee. They hit and run.

Just examine the highlights of Marcus giving the business to Paul Millsap in the postseason and in the chest, and Markieff whacking Jokic when the Nuggets-Heat game had only 2:39 left Monday night at The Jar and the Nuggets in complete command. The Heat called it “a take foul,’’ which means an intentional violation to stop the flow and start the march to the free throw line.

Instead of grabbing Jokic by the wrist, Markieff wanted to leave an indention with his elbow, then turned and walked away.

An irate Jokic ran four steps and blocked Morris in the back, forcing whiplash and a fall to the floor. After a review, the officials disciplined the instigator and the retaliator.

The NBA is aware of the Morris transgressors, but also cognizant that Jokic was removed from the Nuggets’ fourth and final defeat to the Suns the past postseason.

Opponents always have considered Jokic soft, so they attack him hard. And it’s going to get worse with his incredible achievements. However, despite Malone’s complaints to the league that Nikola doesn’t get the calls of others and he’s a bean bag to blows from people named Morris, Joker will have to grimace and bear it if the Nuggets are to be a championship contender.

The Nuggets need their own enforcer to serve and protect.

And Jokic’s two brothers must stay far away from the fray.

Denver Nuggets will be without forward Michael Porter Jr. for 'foreseeable future'

Takeaways and details from Heat’s loss to Nuggets, which included an unfortunate ending

Woody Paige: For the Broncos, is it mission possible?

After the hiatus, all the Broncos must do to finish first in the AFC West, o ye of little faith, is win their final seven games.