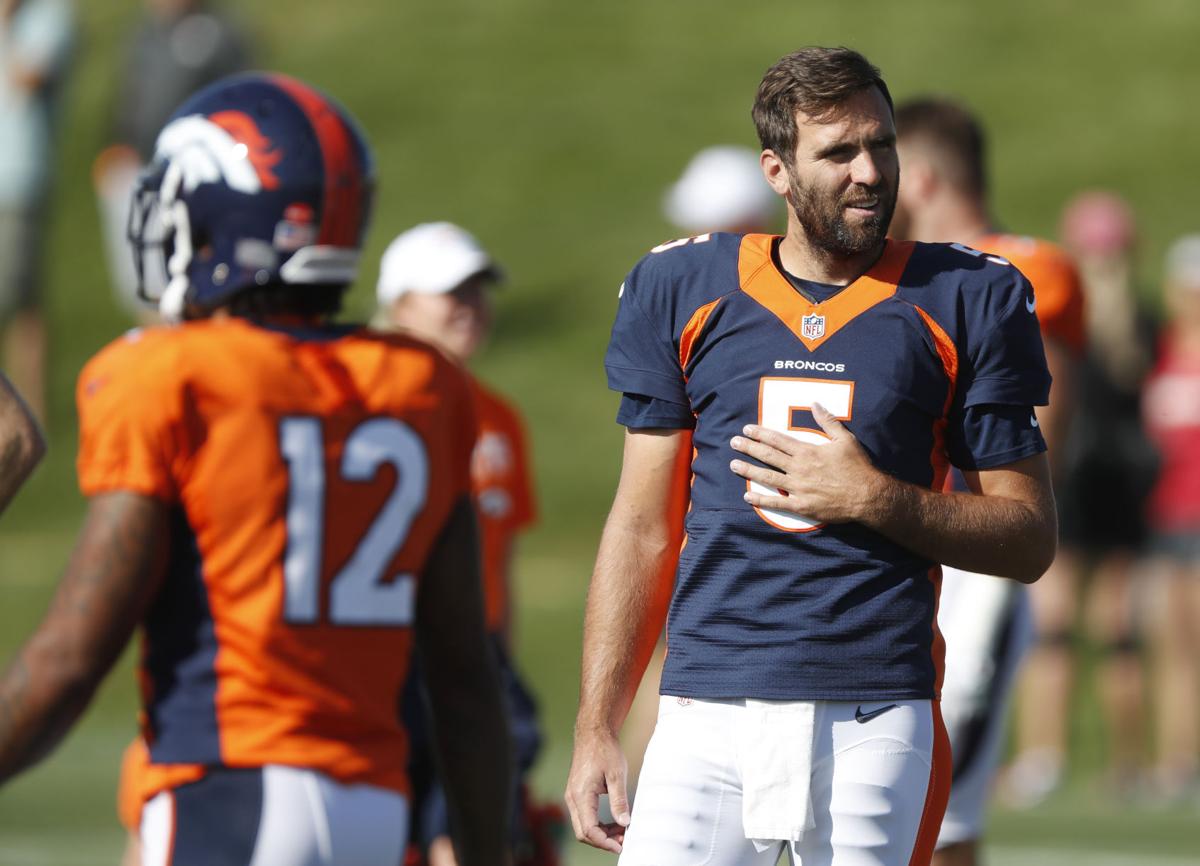 Denver quarterback Joe Flacco takes a break Saturday during a combined training camp with the San Francisco 49ers at Broncos’ headquarters in Englewood. 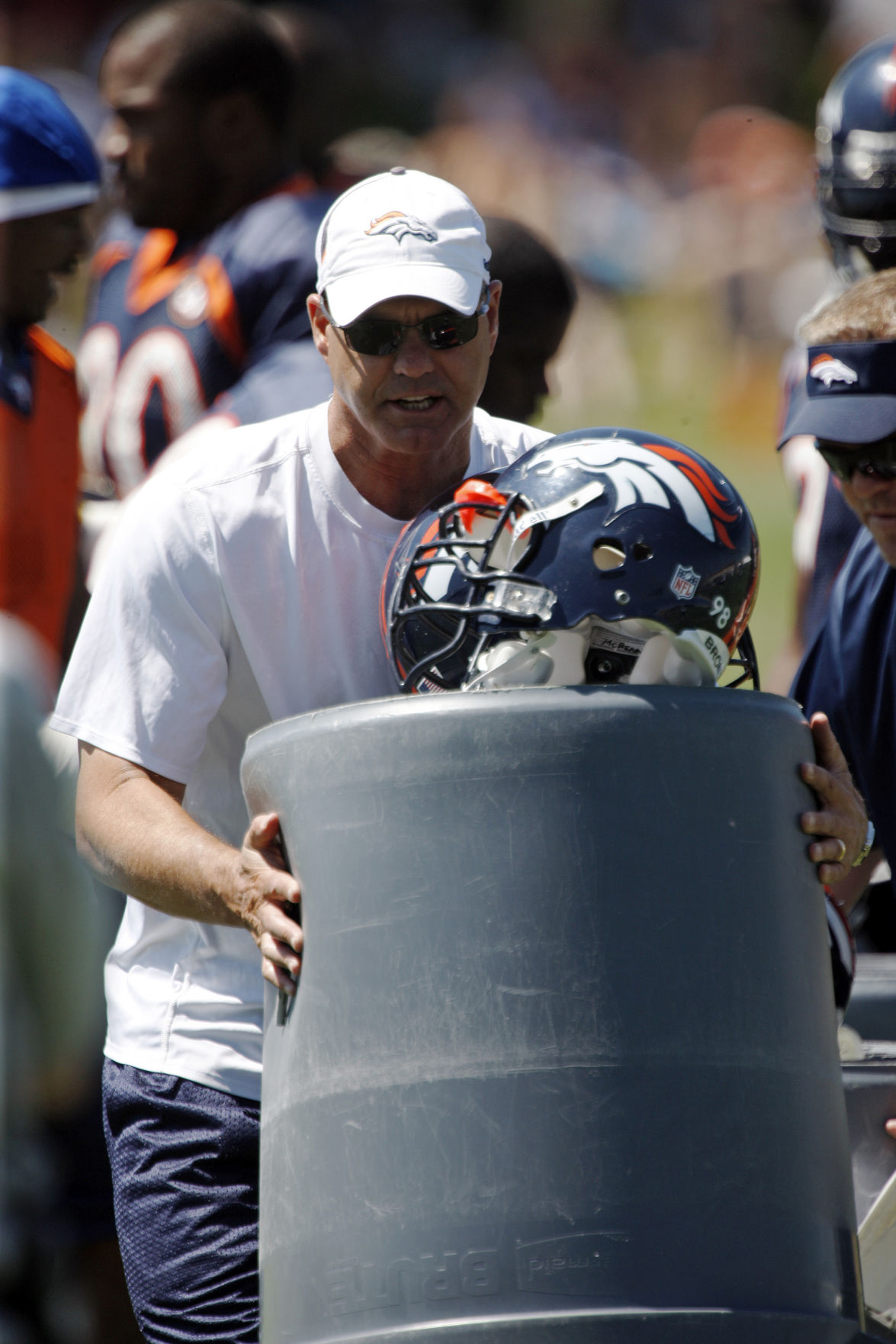 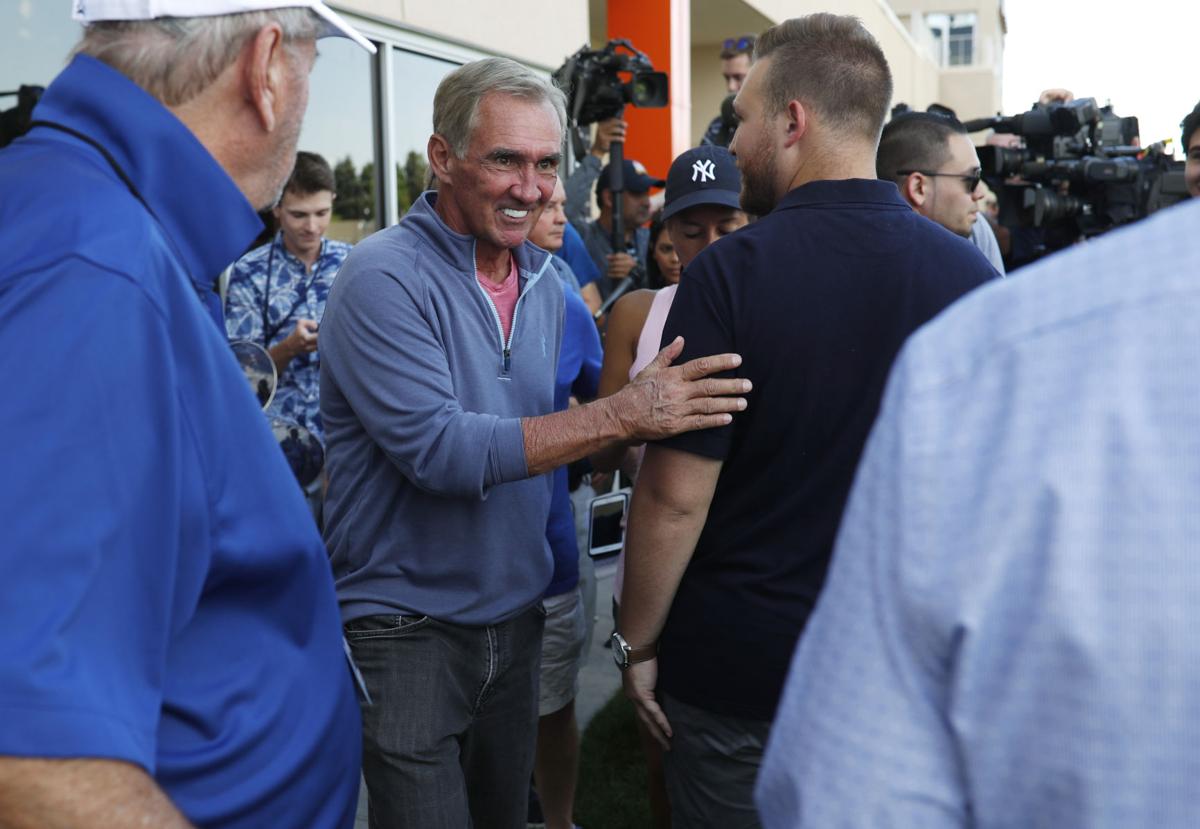 Retired NFL coach Mike Shanahan, center, talks to reporters Saturday during a combined training camp at which the Denver Broncos hosted the 49ers at the Broncos’ headquarters in Englewood. 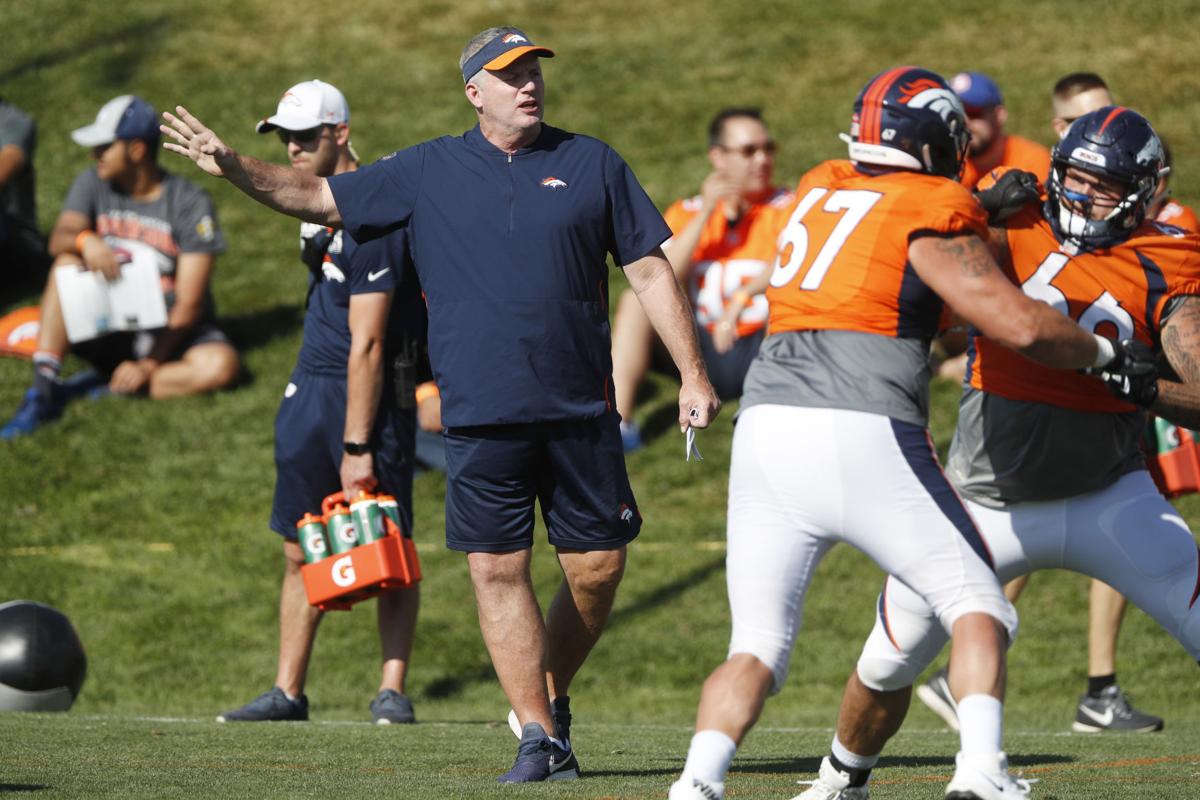 Denver quarterback Joe Flacco takes a break Saturday during a combined training camp with the San Francisco 49ers at Broncos’ headquarters in Englewood.

Retired NFL coach Mike Shanahan, center, talks to reporters Saturday during a combined training camp at which the Denver Broncos hosted the 49ers at the Broncos’ headquarters in Englewood.

ENGLEWOOD • The earth moved as 22.4 tons of beef rumbled onto the fields of Dove Valley on Saturday morning.

The trembling, reminiscent of the early 1800s when herds of bison roamed the Colorado plains, probably registered on the Richter scale at the National Earthquake Information Center in Boulder.

Under an azure sky and pillowy clouds the two bloated rosters of players played out a semblance of scrimmages — the Broncos’ offense to the south against San Francisco defenders, and the 49ers offense on the north side against the Broncos’ defense. Occasionally, special teams action was mixed into the palette. A three-ring circus of football.

Standing next to visitor Mike Shanahan, who has an invested interest in both teams, I asked how many practices he had coached in over 40 years. “I don’t know after all the years of college and the NFL, but I guess I could figure it out.’’

So, what’s his assessment of the latest he watched? Shanahan, who acknowledged he still misses coaching, responded with the proverbial coaches’ adage: “I’d have to look at the films.’’ This from a guy who literally used to game-plan his vacations down to the minute. Coaches, and ex-coaches, are like mushrooms. They spend more time in the dark watching film than did Siskel & Ebert.

After the joint workout Derek Wolfe, suddenly cradling a baby, walked over to proudly show me his daughter Roxanna, who was born July 6. I said: “Beautiful. She doesn’t look like Winston Churchill.’’

Then I talked to Emmanuel Sanders, who, on Dec. 5, tore his left Achilles, an injury that normally requires a full year to recover. The Broncos’ Super Glue-fingered wide receiver — who is 6 yards shy of 5,000 reception yards since 2014 — revealed recently he also underwent “tightrope’’ surgery to repair a right high-ankle separation that occurred in the 2017 season. I’m amazed by his camp comeback.

“I aggressively attacked the rehabilitation twice a day. My mindset was I wasn’t going to let what happened (to both feet) defeat me.’’ It was believed he couldn’t return until midseason. Sanders, who should be “Captain Bronco’’ on offense, says he is “95 percent’ and will start opening night.

Rookie Dalton Risner, already a starter at left guard, has received effusive praise from coach Vic Fangio, who hands out accolades as if they were gold doubloons. Risner introduced himself to “Mr. Shanahan’’ and talked about being a Broncos’ fan as a youngster and “going to your games as much as I could.’’ Risner and I discussed his hometown — Wiggins in northeast Colorado — because I’ve been down its Main Street and loved that there is no red light. The community has 1,000 people and about as many dogs.

Earlier in the touchy-grabby, garbage-gabbing intensive camp competition among a gross of 144 players who won’t be starters or perhaps not make the teams, a melee developed between offensive and defensive linemen, who were mostly sumo wrestling.

The 49ers didn’t charge their players with even one misdemeanor.

Fangio, who was on another field with the defense, didn’t see the fray. But he’ll look at the film.

Fangio’s consigliere is Ed Donatell, the only coach on the staff who also served under Shanahan (1995-99) and won two Super Bowls with the Broncos. He was here another time with Josh McDaniels (2009-10) as secondary coach. I asked how his role had changed with Fangio now that one is the coach and the other is his defensive coordinator.

“We’ve been together six straight years, and we get it.’’ Although I presumed Donatell would be in the press box at games helping Fangio call defensive plays, he has been on the sideline the first two exhibitions. “We’re still working that out,’’ he told me, then said, surprisingly, they don’t talk much once a game begins.

So, how do the Broncos look in their two practices with the 49ers?

I would get back to you after I look at the films, but all I have is a 30-second video on my phone.

Air Force grad Ben Garland is entering his eighth season in the NFL, this time with the San Francisco 49ers. The Denver Broncos host Garland and the 49ers in the preseason that would never end on Monday night, Paul Klee writes.