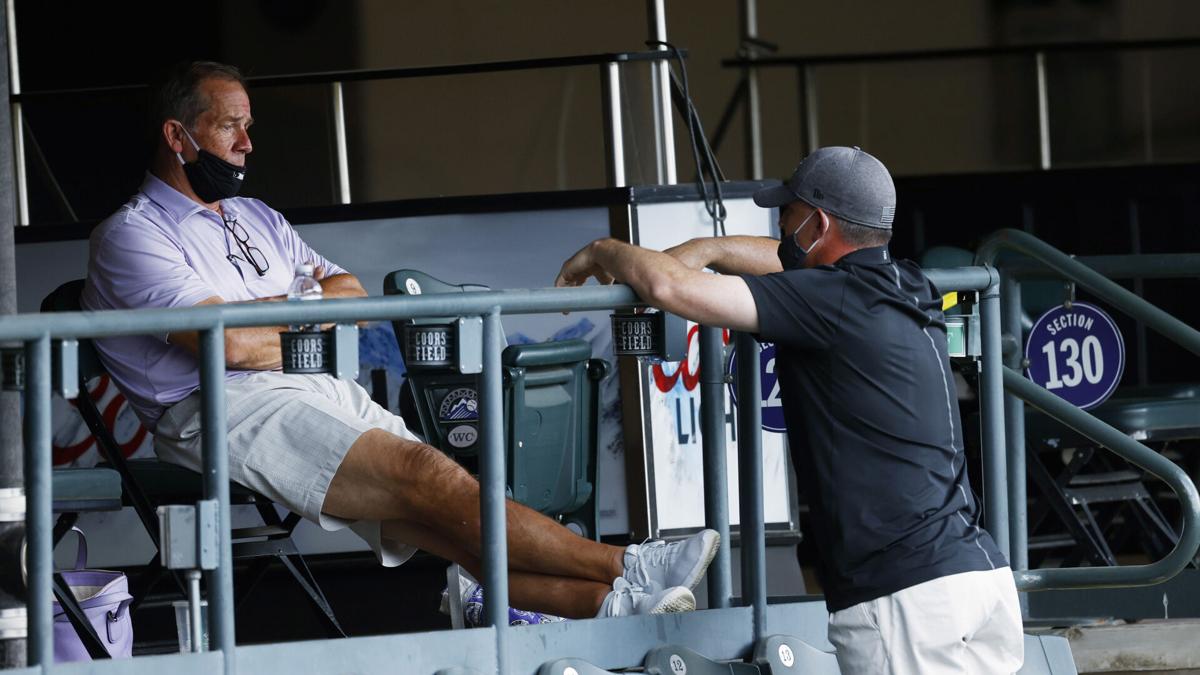 FILE - Dick Monfort, co-owner of the Colorado Rockies, talks during a media tour of Coors Field as workers prepare for the baseball team's home-opener against the Los Angeles Dodgers, in this file photograph taken Thursday, April 4, 2019, in Denver. Monfort and team general manager Jeff Bridich will hold a news conference Tuesday, Feb. 2, 2021, to discuss the trade of the team's star third baseman, Nolan Arenado, to the St. Louis Cardinals. 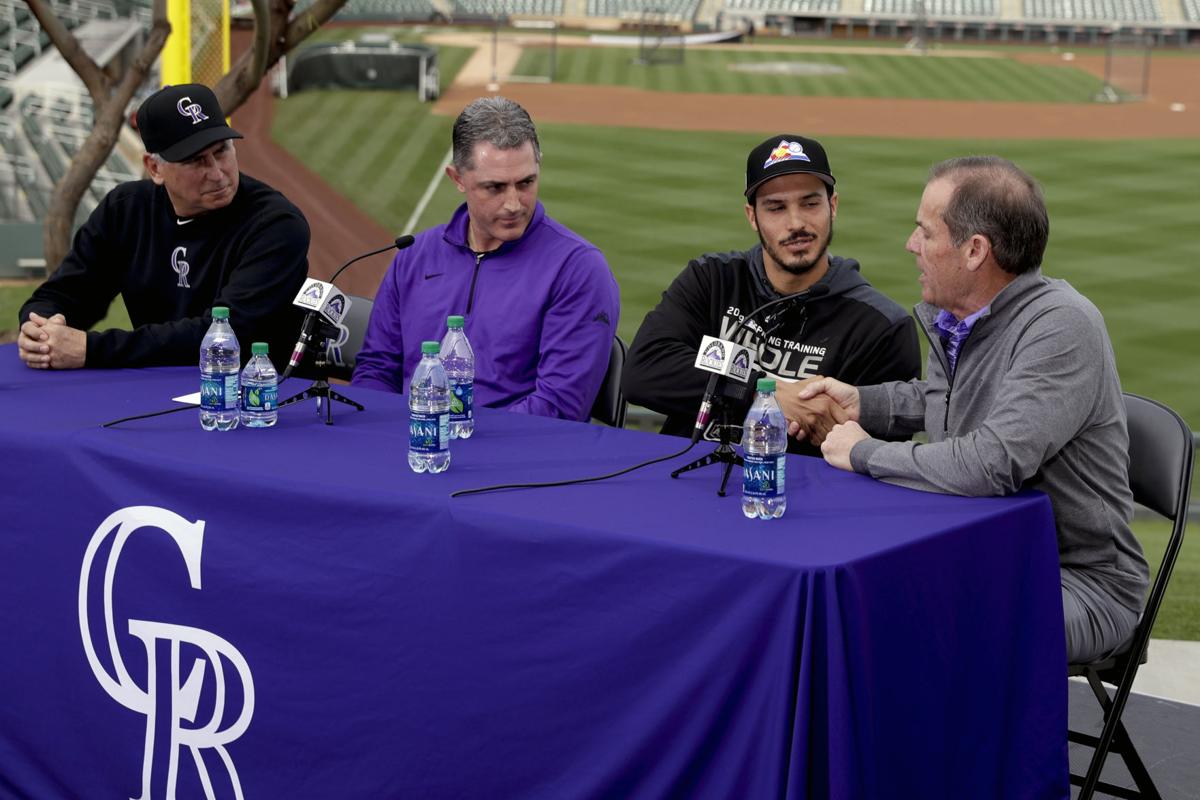 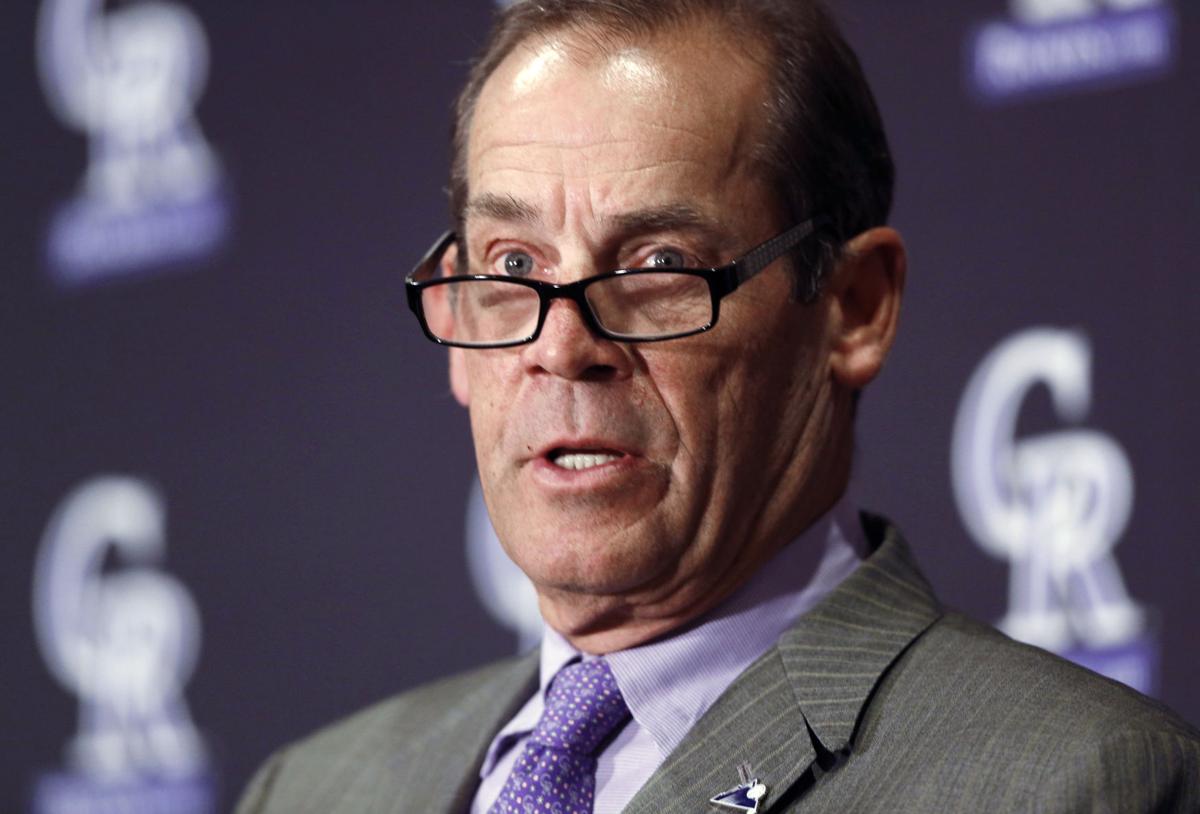 Colorado Rockies co-owner Dick Monfort peers over the rims of his glasses as he announces the team's new general manager Jeff Bridich during news conference in Denver on Wednesday, Oct. 8, 2014. Bridich, who replaces Dan O'Dowd, has served in a leadership role in the Rockies' baseball operations for 10 years, most recently as the team's senior director of player development. (AP Photo/David Zalubowski)

FILE - Dick Monfort, co-owner of the Colorado Rockies, talks during a media tour of Coors Field as workers prepare for the baseball team's home-opener against the Los Angeles Dodgers, in this file photograph taken Thursday, April 4, 2019, in Denver. Monfort and team general manager Jeff Bridich will hold a news conference Tuesday, Feb. 2, 2021, to discuss the trade of the team's star third baseman, Nolan Arenado, to the St. Louis Cardinals.

The Dupes of Denver just got grand-slam-bamboozled. It wasn’t the first time, and won’t be the last.

The top two executives of the Rox traded the Hope Diamond and $50 million for a bag of rocks.

The Rockies’ (dis)organization operates as and smells like a Greeley feedlot, which is fitting, considering Monfort’s background and Bridich’s botches.

Where have you gone, Nolan Arenado? Our Cowtown turns its woeful eyes to you. In the Fleece of the Millennium the Rockheads gave the Great and Powerful Arenado and $50 million to the Cardinals for The Bums of Summer, columnist Woody Paige writes.

For example, since Bridich served as the franchise’s senior director of player development for four years, then was elevated to general manager in October of 2014, the Rockies have drafted 385 players. Over those 10 seasons, only 16 have played a game with the Rockies.

And Russell Wilson plays in the NFL.

During King Jeff’s reign of terrible, the Rockies have signed 14 experienced major league free agents — including eight who were guaranteed $10 million or more — to contracts totaling approximately $275 million. Practically all were underachievers, and only one remains today. Ian Desmond, who opted out of last season, has been the most expensive (at $70 million) and one of the biggest busts alongside three relief pitchers who received $106 million.

Truthfully, the Rockies have let three recent All-Stars go and got nothing in return for two and five nonentities for Nolan Arenado. DJ LeMahieu has now become a batting champion in both leagues.

David Dahl, the No. 10 pick overall in 2012, will be a starting outfielder for the Rangers at a paltry baseball sum of $2.7 million, and Arenado will get his wish to play annually for a championship contender.

Monfort said in his sad-sack media conference that Arenado wanted out. Bridich pushed him out. When the Rockies signed Arenado to an eight-year, $260 million contract in February of 2019, he and his agent did not request an opt-out clause after only three seasons. The clock began ticking immediately.

Even former Rox general manager and Bridich mentor Dealin’ O’Dowd said on the MLB Network the club made a serious mistake presenting Nolan a chance to leave prematurely, and the trade was confusing.

Will Rogers never met a man he didn’t like. Fortunately, he never met Bridich. The GM is not a people person or player relationship man, as everybody who watched his pathetic performance Tuesday live or delayed realized.

The arrogant, smarter-than-thou Bridich was entirely responsible for the ruptured conflict, which goes back to when Arenado and Jeff were trying to get ahead in their jobs in the minors. Nolan was accused of having “an attitude,’’ and O’Dowd and Bridich held him back. When he hit .364 in Colorado Springs, they were forced to promote Arenado.

Monfort is supposed to be Bridich’s superior, but is he really?

He chose to retain a two-bit GM over a generational player.

Upon research of every major league franchise front-office chain of command Thursday, I was reassured that the Rockies are the only club whose owner also chose himself over a qualified expert as chief baseball executive.

Meatpacking maven Monfort divides his time and effort between the Rockies and acting as board chairman of a health/hospital company and a university, and he has sizable investments in an Italian restaurant chain, a bookstore, other enterprises and a downtown commercial-condo complex that cost more than Arenado, Dahl and LeMahieu combined.

Nevertheless, Monfort is not among the 23 baseball billionaire owners. So he cries poor Rockies. If you can’t hunt with the big dogs, get out of the field.

I once asked Dick if the Rockies would pursue the preeminent young first baseman out of Cuba. The owner never had heard of him. Jose Abreu became rookie of the year and, in 2020, the AL’s MVP.

I asked Monfort on Tuesday if he considered firing Bridich and himself. “No.’’ If he’s the “fan’’ he claims, Monfort should do what’s right for baseball in Colorado. Instead of no, Dick and Jeff should go.

If not, the Rockies must hire a trained professional president of baseball operations. Why not Cardinals’ assistant GM Michael Girsch, a brilliant administrator who has worked with the best with a mid-market team?

Every date on the schedule for the Rockies is Fools Day.

Oh, at the Gateway to the West in Mizzou, the sun is shining bright, Budweiser Clydesdales clip-clop beside the Mississippi where all is right.