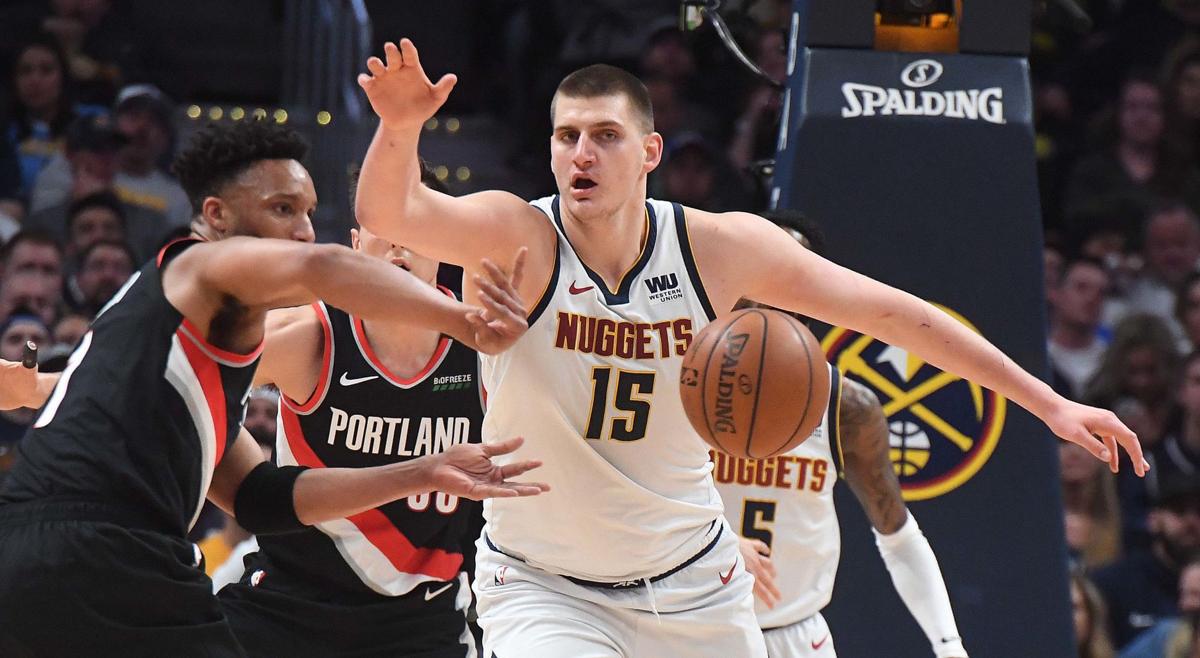 Trailblazers Evan Turner passes the ball from Nuggets Nikola Jokic during the first game of the Western Conference semifinals at the Pepsi Center on Monday, April 29, 2019. The Nuggets defeated the Trailblazers 121-113. (Photo by Jerilee Bennett, The Gazette) 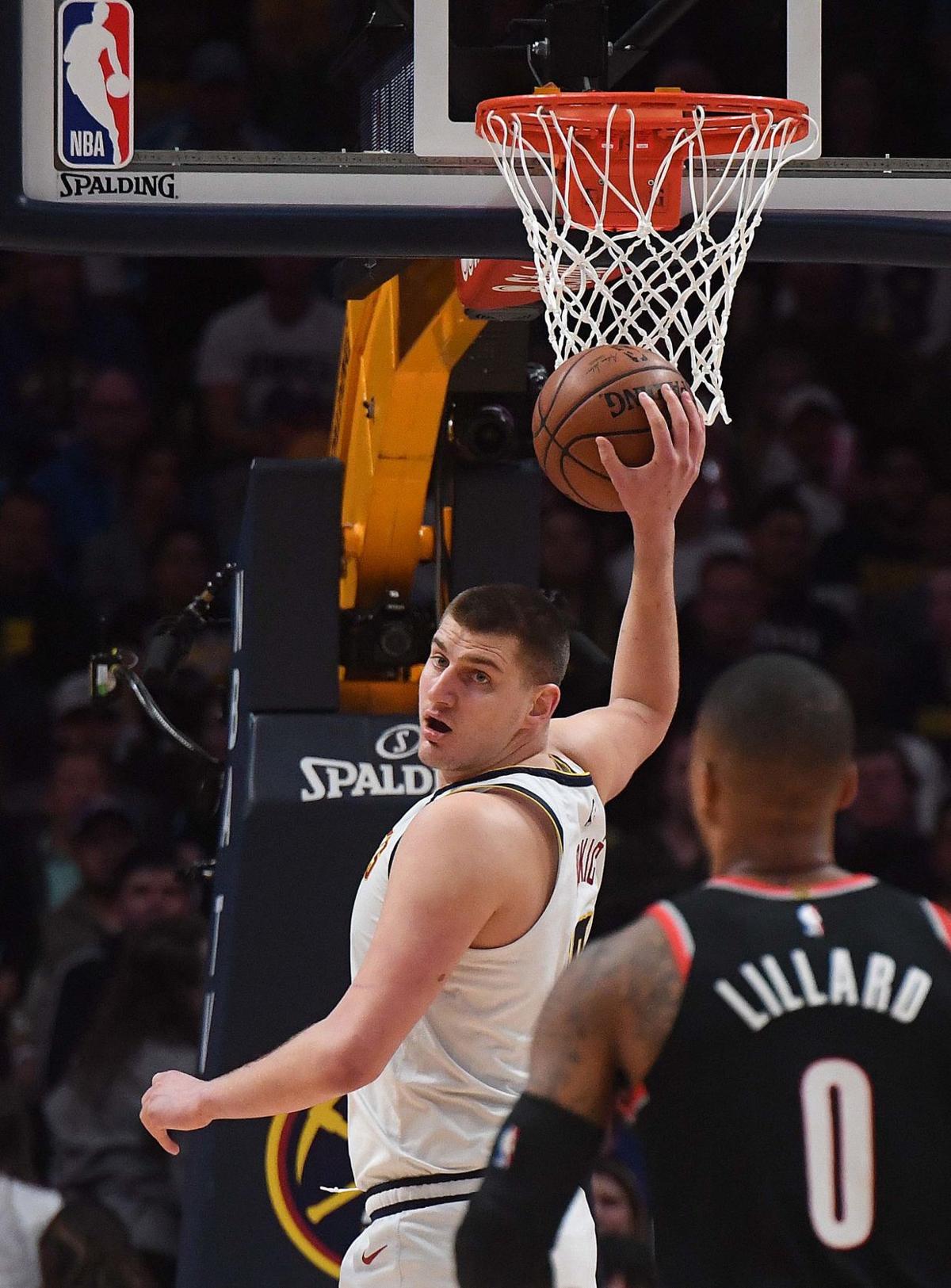 Nuggets Nikola Jokic pulls down a rebound during the first game of the Western Conference semifinals at the Pepsi Center on Monday, April 29, 2019. The Nuggets defeated the Trailblazers 121-113. (Photo by Jerilee Bennett, The Gazette)

Trailblazers Evan Turner passes the ball from Nuggets Nikola Jokic during the first game of the Western Conference semifinals at the Pepsi Center on Monday, April 29, 2019. The Nuggets defeated the Trailblazers 121-113. (Photo by Jerilee Bennett, The Gazette)

Nuggets Nikola Jokic pulls down a rebound during the first game of the Western Conference semifinals at the Pepsi Center on Monday, April 29, 2019. The Nuggets defeated the Trailblazers 121-113. (Photo by Jerilee Bennett, The Gazette)

Portland and the Trail Blazers have let Nikola Jokic get away twice.

The latest time was Monday night.

“The Jokep’’ (in Serbian) became only the third player in NBA playoff history to generate 39 points, nine rebounds, six assists, three steals and two blocks while trailblazing the Nuggets to a 121-113 victory in Game 1 of the second round.

Deal with it, world. The name is pronounced KNEE-cola YO-kitch.

The NBA has been gobsmacked by “The Joker’’ (in English).

As we talk, the Trail Blazers are quite busy attempting to figure out the ways and means of restraining the prodigious Nikola on Wednesday night at The Can. In his first eight postseason participations the 24-year-old, 250-pound, 7-foot center has averaged ... wait for it ... 24.9 points, 11.8 rebounds and 8.8 assists and is a triple-doubler waiting to go ballistic in every game — as he did in No. 7 against the Spurs (21-15-10).

Steve Kerr, former commentator and current Warriors coach, said Jokic was his favorite player in the league to watch on nights his own team isn’t playing. Dallas sports columnist Tim Cowlishaw, on ESPN’s “Around The Horn’’ Tuesday, called Jokic “the best point guard in the NBA.’’ After his Spurs were outed and ousted by the Nuggets, coach Gregg Popovich described Jokic as “magnificent, I’ll just leave it at that.’’

Paul Millsap, who has been around for the league for 13 seasons and 95 playoff games, said of Jokic after Monday’s game: He’s like a quarterback out there. I consider him like a Tom Brady. He’s always going to pick you apart and make the right reads. Commend him for doing that at this stage in his career. It’s unbelievable.’’

It’s not completely preposterous when he’s mentioned in the same sentences with Brady, LeBron, Julius, and now these two — Kareem Abdul-Jabbar and Wilt Chamberlain. This year Nikola passed Abdul-Jabbar for second on the all-time list of centers with triple doubles, and only Chamberlain is ahead. If he continues his career in similar style, The Colossus Serbian will pass The Big Dipper.

Not that bad for a once roly-poly kid who wanted to become the world’s largest harness racing driver.

He has grown, while losing 40 pounds, to be the “The Joker’’ who ultimately will surpass Jack Nicholson, Cesar Romero, Heath Ledger and, upcoming, Joaquin Phoenix in that role.

The Trail Blazers could have stopped him if they had become interested when Jokic was in their town.

Five years ago this month Jokic, a teenager who had been playing in the unheralded Adriatic League, was invited to the Nike Hoops Summit in Portland. Few teams had heard of him; fewer had ever seen him, and most considered him as an overweight, out-of-shape, non-athletic soft European player for Mega Vizura.

The Nuggets’ management thought Jokic (and his broad body) could be molded into some kind of NBA player. Perhaps, though, not the most majestic kind. In the second scrimmage of collegiate camp at the Trail Blazers’ training facility, Jokic outperformed the likes of Karl-Anthony Towns, Clint Capela and Emmanuel Mudiay (who would become the Nuggets’ first-round draft pick) with 20 points and nine rebounds, and was proficient as The Long-Ranger.

Jokic was planning to return to Europe and sign a deal with Barcelona. Only, when Barcelona scouts came for a game, Nikola, in his own evaluation, stunk up the joint. No contract was offered. But Tim Connelly, then the Nuggets’ fresh general manager, told Jokic’s agent the franchise would draft Jokic with the 41st pick. Nobody in the league believed he was a first-round choice.

He has become a nice big.

As a boy in war-frayed Sombor, Serbia, living in a tiny apartment with his parents, a grandmother and his two older brothers, Nicola preferred horses and several Cokes a day to basketball. A family photo shows a chunky Jokic in a sulky seat after a race.

Instead, this season Jokic signed a five-year, $148 million contract, was chosen to his first All-Star Game, led the Nuggets to the second seed in the Western Conference and had an advanced statistical average, per 100 possessions, of 31.5 points, 17 rebounds and 11.4 assists.

The Can crowds are chanting “MVP,’’ and he certainly would be The NBA Finals candidate if the Nuggets could climb to the cosmos.

But, first, the Trail Blazers for probably several more games. Portlanders, and Americans, know who Nikola Jokic is now.

DENVER – After waiting 10 years to play in this round, Denver sprinted into the action.