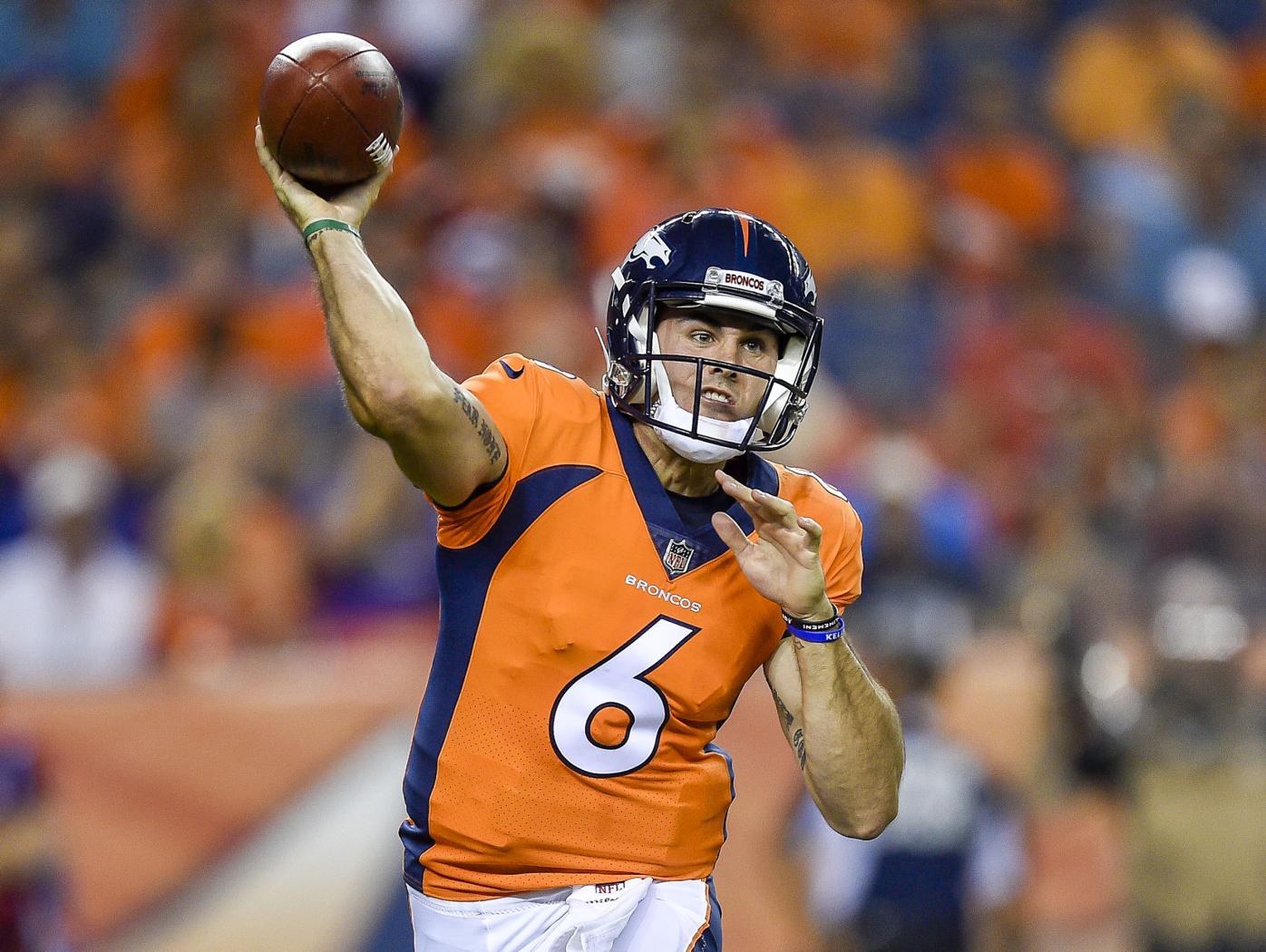 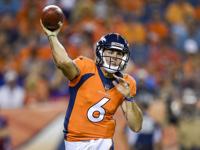 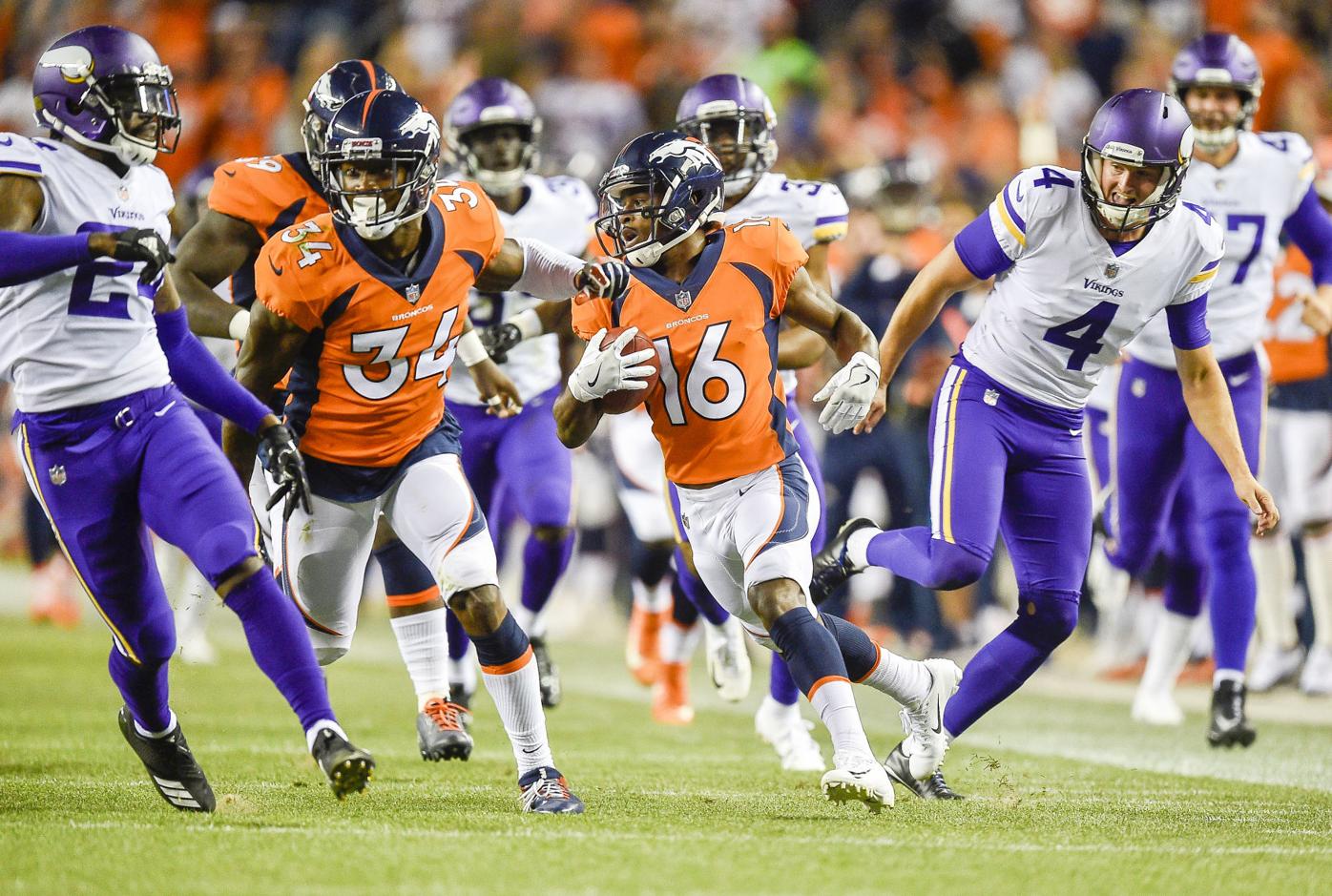 Denver Broncos wide receiver Isaiah McKenzie (16), center, runs the ball for a touchdown in the second quarter of the Broncos first preseason game at Broncos Stadium at Mile High on Saturday October 11, 2018 in Denver, Colorado. (Photo by Dougal Brownlie, The Gazette)

Denver Broncos wide receiver Isaiah McKenzie (16), center, runs the ball for a touchdown in the second quarter of the Broncos first preseason game at Broncos Stadium at Mile High on Saturday October 11, 2018 in Denver, Colorado. (Photo by Dougal Brownlie, The Gazette)

DENVER • For three quarters Saturday night the Broncos looked inexcusably abysmal — as they were last season — against the Vikings in a throwaway exhibition at The Horse With No Name Stadium.

Then, the Broncos uncovered their new backup quarterback — Chad Kelly.

The game became Kelly vs., get this, Kyle. Last year’s preseason discovery against this year’s.

And Kyle Sloter did what he did in 2017, and his new team defeated his old team.

Paul Klee: Too soon? Time to turn up the heat (again) on Vance Joseph's Broncos

One of the other MVPs was Marquette King, who averaged 49.2 yards on six punts in the first two quarters. King, profiled in this column as a great punter and person, has been skewered by clown-wreck media and “fans.’’ Three other Broncos’ stars were rookie “Rolls’’ Royce Freeman with 38 yards rushing (9.5 average), including an impressive 23-yard scoring dash; prodigal son Isaiah McKenzie, who actually didn’t fumble, but, rather, had a sensational 78-yard punt return; and Colorado’s own undrafted Phillip Lindsay, who caught a touchdown pass.

However, the two highlight film-makers were Kelly, who threw for two touchdowns (with one bad interception), and Sloter.

Perhaps the Broncos should have declared Saturday night’s quasi-game as “Quarterback Appreciation Night,’’ with free bobblehead dolls of the franchise’s previous 46 starting QBs.

Nine — count em’ — nine quarterbacks who are or have been associated with the Broncos were present at the game with the Vikings.

This is the inventory of Broncos’ quarterbacks who were in attendance: Keenum and No. 2 and 2A quarterbacks Paxton Lynch and Kelly; Vikings’ reserve quarterbacks Trevor Siemian and Sloter; Broncos’ executive-in-charge-of-the-world John Elway and his close friend and ex-longtime backup Gary Kubiak, who has no exact title; Broncos offensive coordinator Bill Musgrave, who served as Elway’s caddie for a short time in his playing career; and Brian Griese, the successor to Elway as the starting quarterback and now the TV analyst for the Broncos pre-real displays.

The starters were Keenum, the Vikings’ starter last season, and Kirk Cousins, who was considered (erroneously) as the Broncos’ pre-eminent choice for QB this season. Elway chose Keenum, who wasn’t valued by the Vikings, and Cousins chose the Vikings. Cousins got a four-year, fully guaranteed $84 million contract, and Keenum received $36 million for two seasons.

Cousins led his Vikes to a touchdown pass to Stephon Diggs, Keenum’s target in the Minnesota Miracle, and was satisfied and retired for the evening. He was 4 of 4 for 42 yards.

Keenum led his Broncos to nothing in a couple of series. He was 1 of 4 for a measly 9 yards in a brief appearance that didn’t prove anything.

Guess who returned? Siemian, who started 24 games as a completely average quarterback for the Broncos in his three seasons, was inserted and, on his second series, threw — surprise, surprise — a touchdown pass.

Guess who came in for the Broncos? Lynch immediately flung a too-high pass over the middle intended for Austin Traylor. The ball caromed off the hands of the tight end and was intercepted.

Woody Paige: Denver Broncos' depth chart may have a River running through it

Lynch certainly didn’t help his chances of being accepted by Broncos’ backers (or linebackers or cornerbacks or running backs) and improving his reputation.

Siemian was better than Lynch. He completed 11 of 17 for 165 yards, with two touchdowns and an interception. In the first half Lynch was 4 of 9 for, uh, 12 yards and the pick, but the Broncos’ offense did have a moment with the 23-yard touchdown run by Freeman, who should be the starter this season.

The Vikings would feel comfortable playing Siemian or Sloter if Cousins is injured for a game or three, but the Broncos don’t trust Lynch, who has won one game in two seasons when he started. Despite his one wow-wee training camp workout, Lynch looks more, and more often, as just another first-round round draft bust.

Lynch is in serious danger of being beaten out again by another seventh-round selection — Kelly. If Lynch had been chosen in the seventh round, he’d be out of the league or battling Brock Osweiler for a spot on the Dolphins’ roster.

As Lynch continued into the second half, the Vikings sent in 2017 Broncos’ walk-on Sloter, who became The Peoples’ Choice in exhibitions.

Sloter was the same standout we all saw before. He was 9 of 11, with a touchdown.

Kelly played for the first time in a Broncos uniform and threw for two touchdowns, and was close to another on the final play.

But the home team, and Lynch, were booed again in the first half.