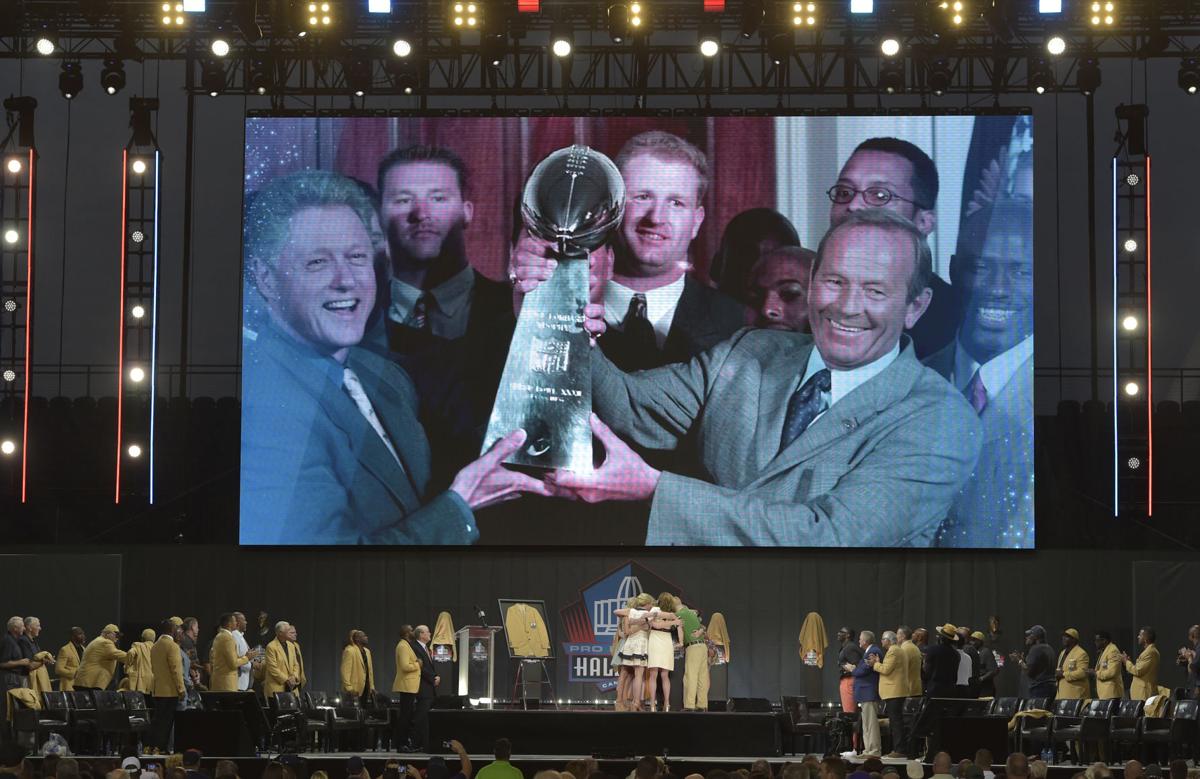 The Bowlen family hugs during the presentation for former Denver Broncos owner Pat Bowlen during the induction ceremony at the Pro Football Hall of Fame on Saturday in Canton, Ohio. 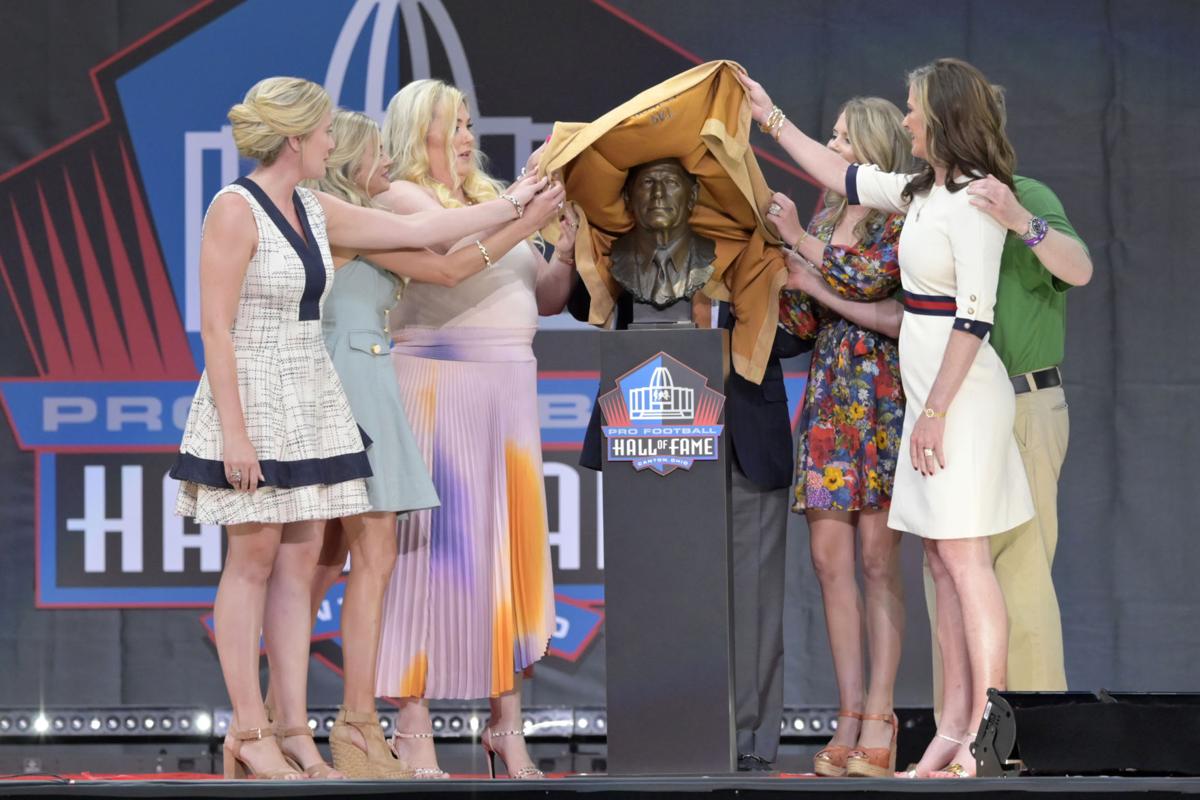 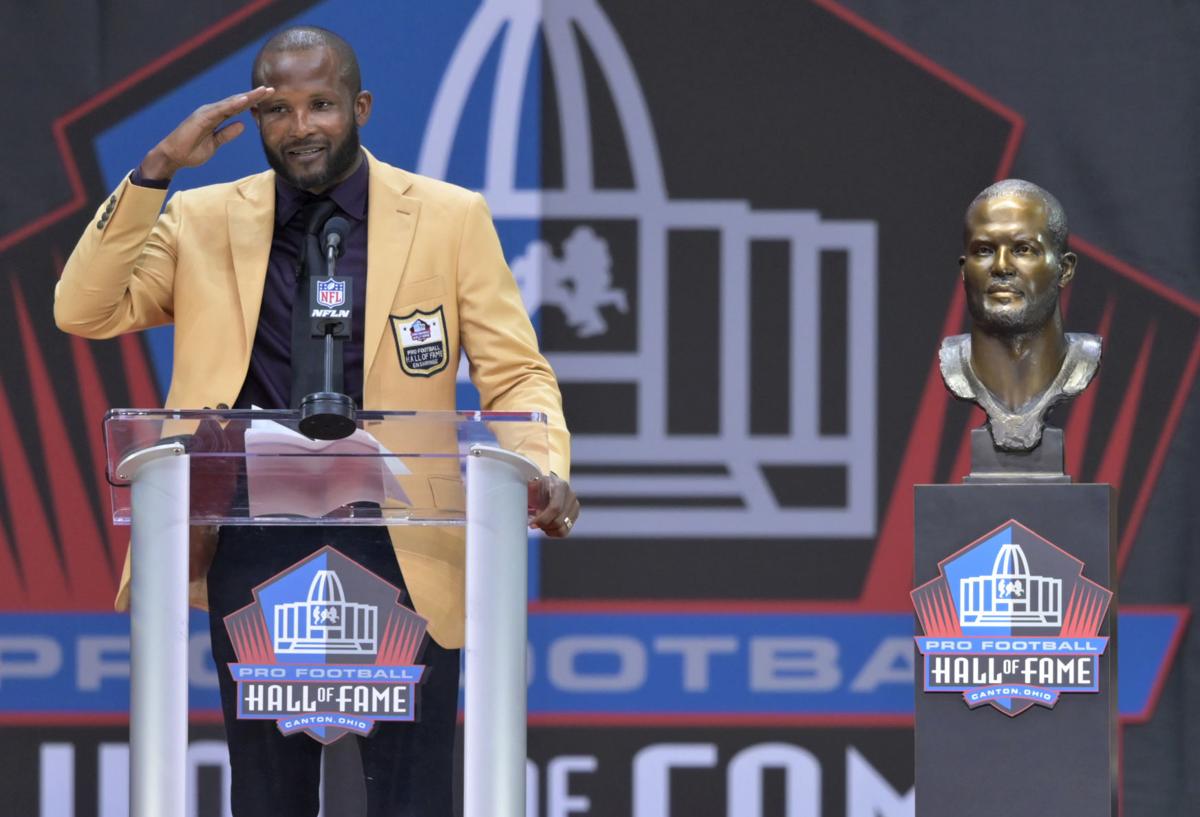 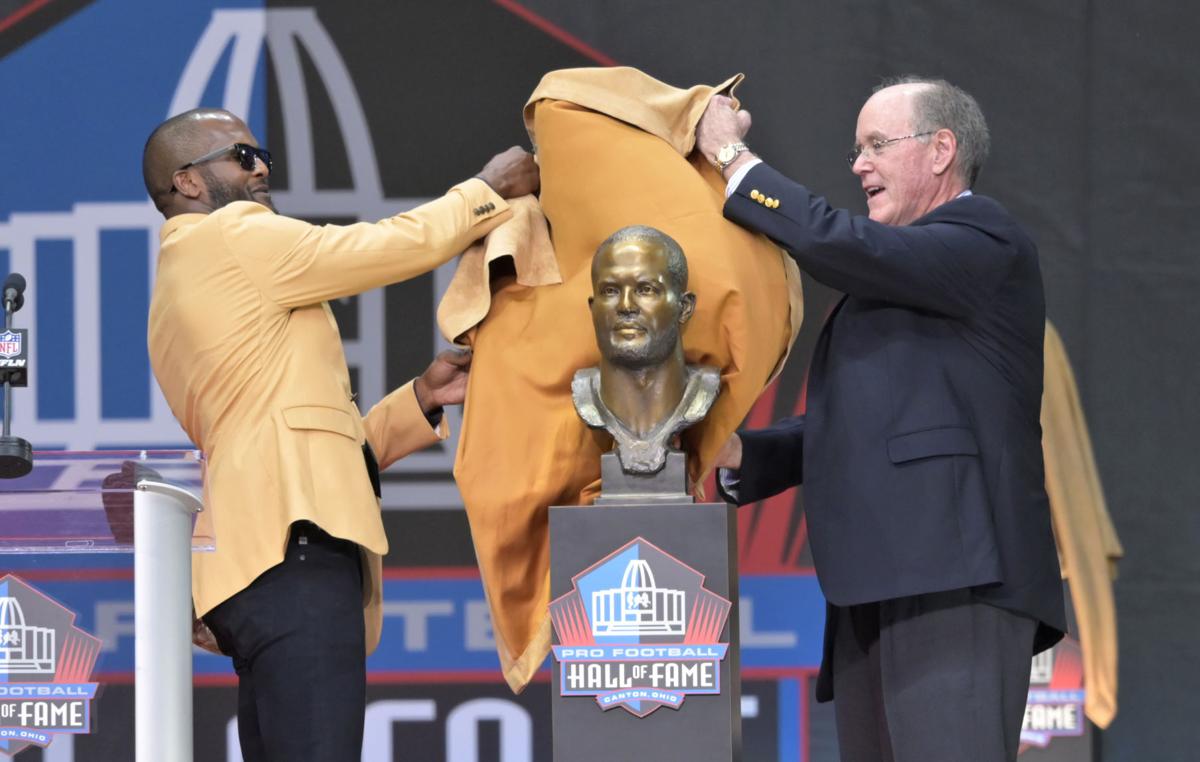 CANTON, Ohio • At midnight local time the busts of Pat Bowlen and Champ Bailey were placed permanently on their pedestals in the northeast section of the circular chamber of the Pro Football Hall of Fame.

The two sculptures are among the Great 8 of 2019 and amid the Select 326 of all-time Hall of Famers.

More than 175,000 players, coaches, owners and contributors have been with the NFL in a century. Few have been chosen for Canton.

The Broncos’ Bowlen and Bailey busts are as close as they were when Champ played for Pat. Bailey’s is on the top row of the inductees, Bowlen’s just below Bailey’s.

As the platforms stood vacant Saturday afternoon an hour before the annual induction rites, I meandered through the Hall’s halls stopping to study the busts of other players who spent their dominant years or entire careers with the Broncos — John Elway, Gary Zimmerman, Shannon Sharpe, Floyd Little and Terrell Davis — and the others who passed through Denver for a while — Willie Brown, Brian Dawkins, Tony Dorsett and Ty Law — and assistant coaches Stan Jones and now Mike Munchak. There should and will be more.

I had the pleasure of giving the nominating speech to the Hall of Fame committee for the Broncos’ quarterback. It’s still a record. “Gentlemen, John Elway,’’ I said, and sat down.

Peculiarly, as I walked over to the Gold Jacket room where the enshrinees and 100 other Hall of Famers awaited the celebration ceremony, a fellow in orange pants, a blue shirt and a smile big as all outdoors said hello.

Shannon Sharpe, one of the greatest ever.

Jim Brown, the greatest ever, walked by.

A quartet of quarterbacks were sitting in a row, and a plethora of other Famers were congratulating Champ Bailey, adorned in his gold blazer.

And smack in the middle of all the Hallabaloo sat the Bowlens, being herded by Broncos’ trainer emeritus Steve “Greek’’ Antonopulos.

The homage to Mr. B was fourth on the program of the eight Hall of Fame honorees.

The gathering of about 10,000 in the stadium was dominated, honestly, by Broncos’ loyalists.

A 10-minute film paid tribute to the football man and the personal man. It was orange, and it was blue; it was poignant, and it was melancholy. It was a celebration as The Greek pointed to the sky and said of the night “this is for Pat.’’

At that moment Steve led out Pat’s seven children. Mrs. B, Annabel Bowlen, is suffering with Alzheimer’s, the horrific disease that struck her husband and ended his reign of success in football and in life.

The Bowlen bust, a flattering facsimile that would be positioned on the pedestal about three hours later, was unveiled, and his framed Fame golden jacket was brought out.

There was no speech, only silence. It was the most meaningful moment of the evening’s event.

Bowlen was one of seven Hall of Famers who have died in the past year.

Next to the podium was Ty Law, who won three Super Bowl rings with the Patriots, then would conclude his career in 2009 with the Broncos and in the defensive backfield with Champ Bailey.

Ty thanked the Broncos and Bowlen for giving him a chance at the end of his career.

Law was one of four defensive backs to enter the Hall through the front door on a hot, humid night in Ohio.

The others were Johnny Robinson, Ed Reed and Champ Bailey.

Ed Reed broke a record Bailey had held with the two longest interceptions in league history.

He also set the record Saturday for the longest Hall of Fame speech (36 minutes).

So, the audience thinned substantially before Roland “Champ’’ Bailey was introduced at 10:32 p.m. The Broncos’ patient faithful stayed.

“I have to thank God for Broncos country,’’ he began. “I thank the Hall of Fame committee for getting it right the first time.’’

Champ, speaking emotionally and expressively without referring to notes and from the heart, thanked a litany of people, especially his mom and dad — and Pat. “Mr. B will be missed, but he forever will be my teammate.’’

Pat is gone, but he was here in spirit with Champ. Bowlen and Bailey are united again as legendary Broncos in the Hall of Football’s Famous.

Columnist Woody Paige says Denver Broncos wide receivers Emmanuel Sanders and Courtland Sutton put on a united front a day after they had an altercation.