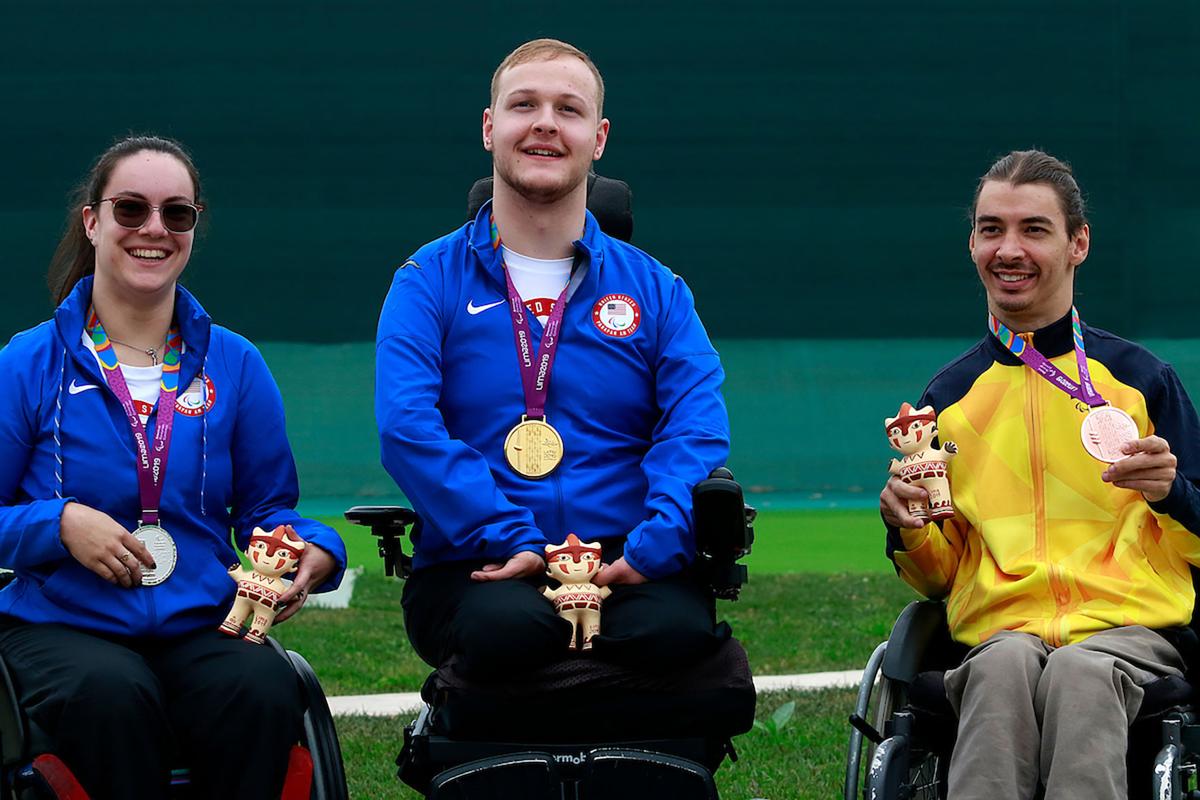 Lima, Tuesday August 27, 2019 - From left to right Mckenna Dahl from the USA, Stetson Bardfield from the USA and Bruno Kiefer from Brazil, winners of the silver, gold and bronze medals, respectively, in Mixed´s 10M Air Rifle Prone SH2l at the Base Aerea Las Palmas at the Parapan American Games Lima 2019 Copyright Miguel Bellido / Lima 2019 Mandatory credits: Lima 2019 ** NO SALES ** NO ARCHIVES ** 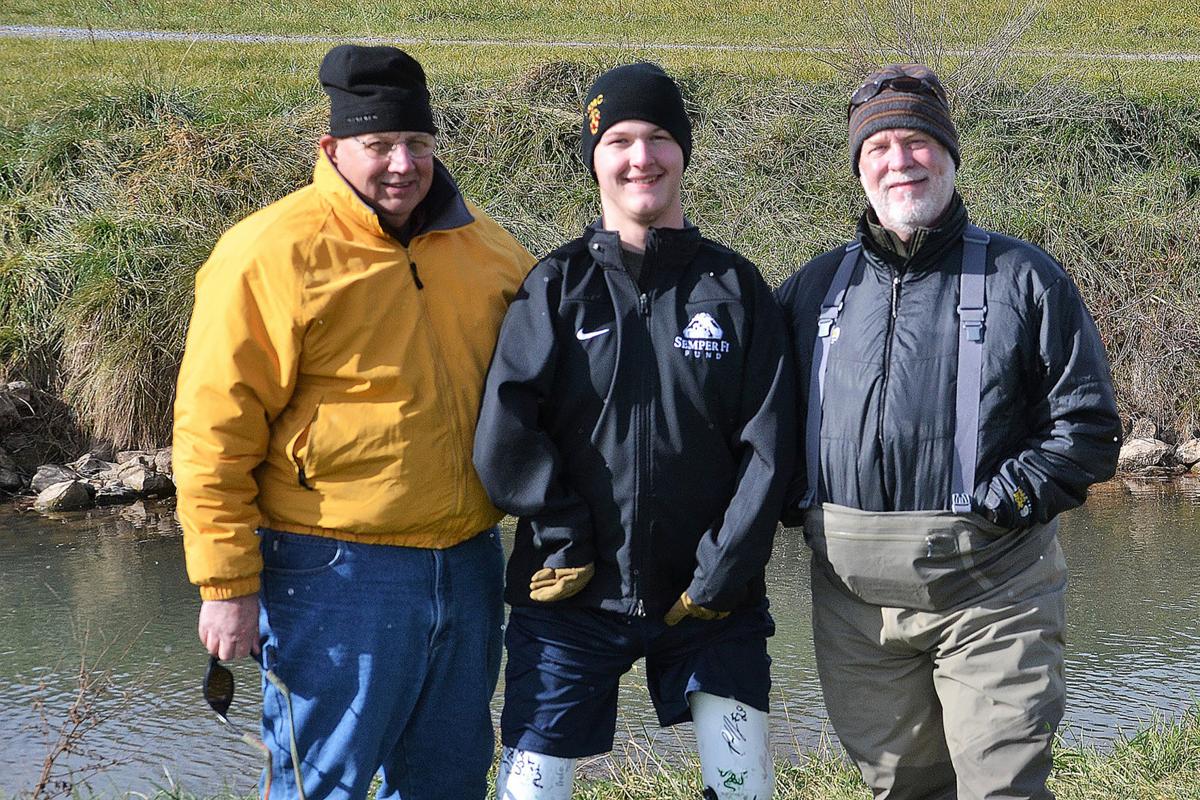 Lima, Tuesday August 27, 2019 - From left to right Mckenna Dahl from the USA, Stetson Bardfield from the USA and Bruno Kiefer from Brazil, winners of the silver, gold and bronze medals, respectively, in Mixed´s 10M Air Rifle Prone SH2l at the Base Aerea Las Palmas at the Parapan American Games Lima 2019 Copyright Miguel Bellido / Lima 2019 Mandatory credits: Lima 2019 ** NO SALES ** NO ARCHIVES **

When Stetson Bardfield was 4, his ambivalent parents asked the boy if he was willing to undergo major surgery that would amputate both legs at the knees. It was a difficult, dangerous decision.

“I said yes because it would be my only chance to ever walk in my life,’’ Stetson, who is now 18, tells me.

As I sat down on an airplane on a Sunday night in early October returning to Denver from a Broncos’ game against the Chargers in Los Angeles, a young man in the next seat said: “Do you mind if I take off my prosthetics? My knees really hurt. I replied: “Sure.’’ Stetson said: “It grosses out some people.’’

For two hours Bardfield, who lives in Colorado Springs, would talk of many things, as the Walrus said, that would make me laugh, cry and think of the true meaning of life.

I called Tuesday to check in on Stetson.

The young man with the same name as a famous Western hat, devised by a gold prospector in Colorado in 1865, is a Paralympian shooter on Team USA.

Stetson was scheduled to qualify next month for the 2020 Paralympics in Tokyo. He won the gold medal in his air rifle event in August in the Parapan America Games in Lima, Peru — even though he has limited use of gnarled hands.

On the airplane the teenager utilized straws to lift a cup and snacks from his backpack.

Stetson, an Army brat whose father was stationed at Fort Carson, was born with arthrogryposis, a rare congenital condition that develops in the womb and curls most of the baby’s joints in feet, hands, hips, shoulders and arms into an immovable state. He never would have been able to walk or grasp anything on his own.

Every day of Stetson’s youth was a struggle — to get out of bed, put on his clothes, attach his primitive prosthetics and try to survive. He could only watch the other kids play games.

After his family moved to the Springs in 2014, Stetson attended the Wounded Warrior Games with his dad and met a gunnery sergeant who won a gold medal, presented it as a gift to the kid and suggested he take up sport shooting.

“It was better than sitting around playing video games and feeling sorry for myself,’’ Stetson said.

He learned a unique style for holding a pistol and a rifle, starting practicing daily for several years, became accomplished enough to hit a bottle cap-sized target at 35 feet, was selected to Team USA as its youngest competitor, started to finish in the top three at meets, pulled off a miraculous upset in Peru last year and established as his dream the 2020 Paralympics.

“When I got the gold in Peru, I realized I could be a first-class athlete and compete internationally against older men with experience and medals, and didn’t have as many issues as I do."

Meanwhile, he had secured the latest, innovative prosthetics that allowed his knee joint to bend, and Stetson served as a tour guide at the U.S. Olympic and Paralympic Training Center.

Stetson fell in love with fellow shooter Kelly Foster, and they moved in together and made future plans, including the Olympic trip to Japan.

Then, the entire world, including the sports world, turned upside down.

The young man who goes by “FootlessFury’’ on Facebook was startled by events. In a life that had been so challenging, Stetson had developed the courage to exist, overcome and succeed, then “it all fell apart.’’

The coronavirus shut down training for Olympians and the Paralympians. The 5-foot-11, 158-pound Stetson hasn’t been able to shoot for weeks. Because he lives off-site, he isn’t allowed at the Olympic complex.

On March 21, the International Olympic Committee announced that the Summer Games had been postponed.

“We knew the postponement probably was coming, but it was a shock.

“I’ve always been optimistic, and I’m trying to look at this as a positive. The extra year will help me improve and give me an edge for the qualifying next May (in Peru again) and at the Paralympics.

When his mother was pregnant, she asked fellow employees to put baby names in a box. She chose Stetson.

He never has owned a cowboy hat, but Stetson would like to wear a Stetson in Tokyo representing Colorado Springs, the West and America.

The young man who had the strength at 4 to decide on an operation to remove the lower sections of his legs intends to walk proudly up the stairs to the medal stand at the Paralympics.

The Colorado Springs-based United States Olympic & Paralympic Committee formed a Mental Health Taskforce in February, before it knew the issues it would immediately confront would include a Games-postponing pandemic.