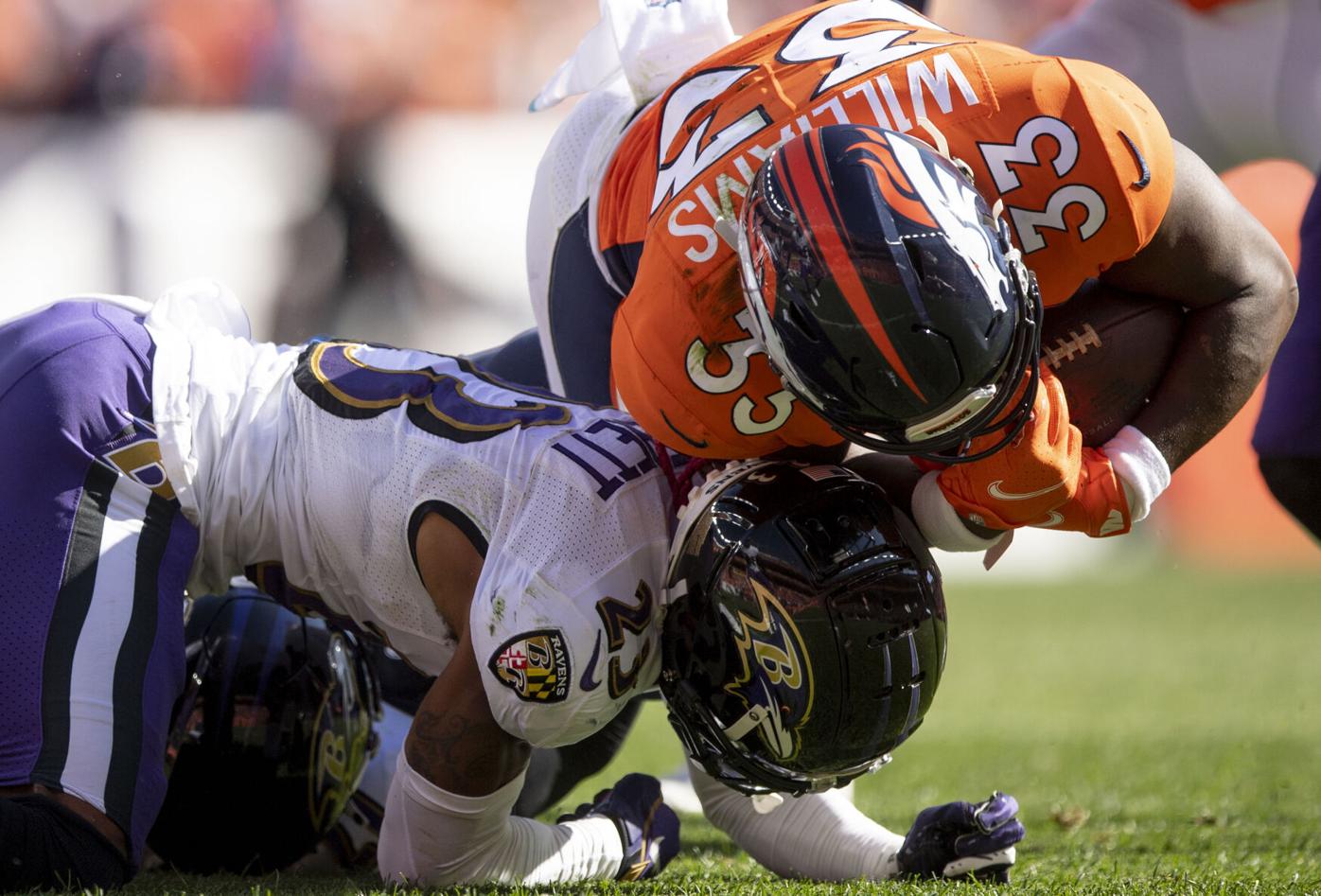 Denver Broncos running back Javonte Williams (33) is tackled with the ball during the Denver Broncos home game against the Baltimore Ravens at Empower Field at Mile High in Denver, Colo., on Sunday, Oct. 3, 2021. The Broncos lost the game to the Ravens by a score of 23-7.(Chancey Bush/ The Gazette) 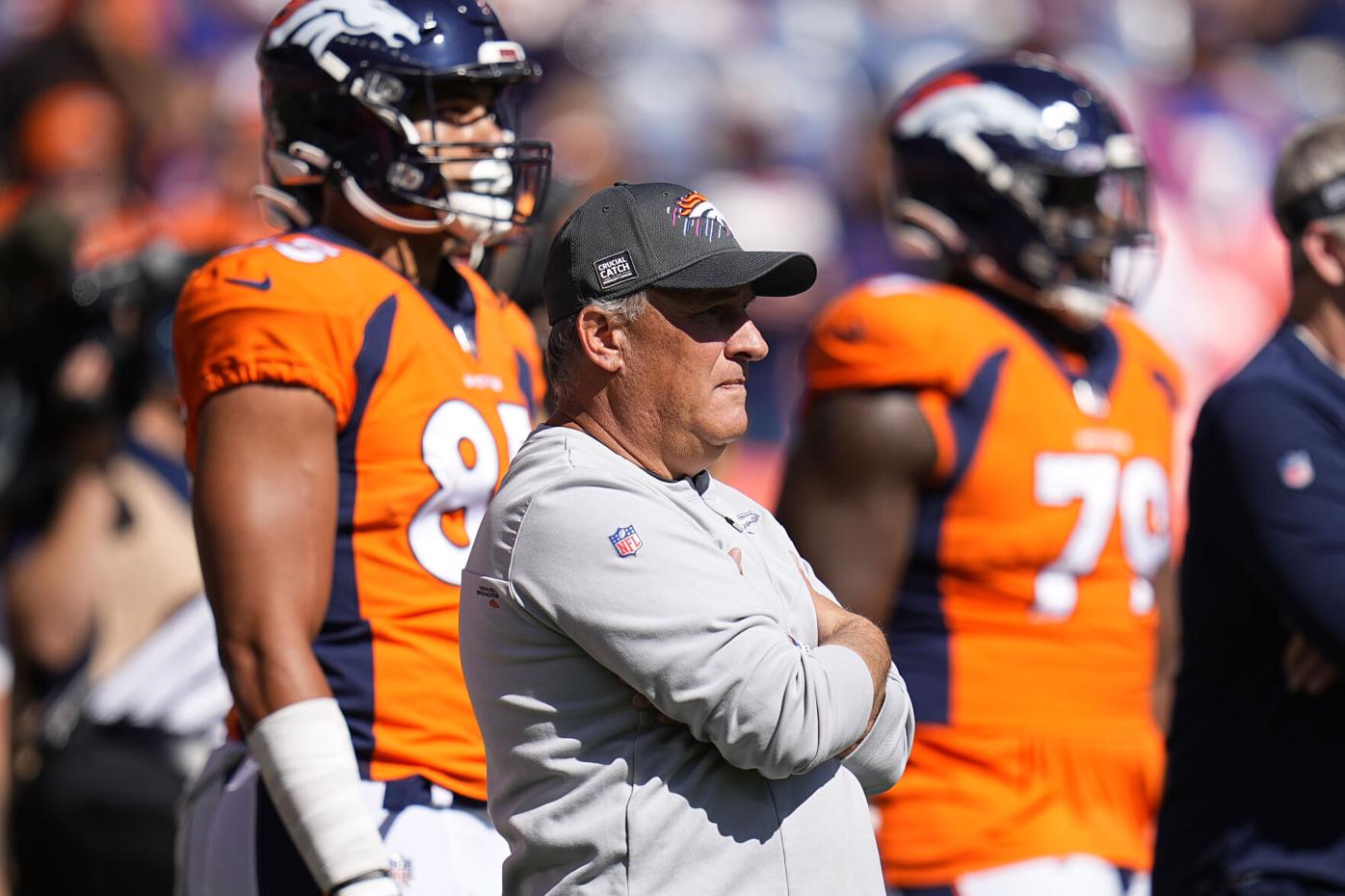 Broncos coach Vic Fangio watches against the Ravens on Oct. 3 in Denver.

Denver Broncos running back Javonte Williams (33) is tackled with the ball during the Denver Broncos home game against the Baltimore Ravens at Empower Field at Mile High in Denver, Colo., on Sunday, Oct. 3, 2021. The Broncos lost the game to the Ravens by a score of 23-7.(Chancey Bush/ The Gazette)

Broncos coach Vic Fangio watches against the Ravens on Oct. 3 in Denver.

“It was cow pies,’’ to misquote Vic Fangio.

Appropriately, the Ravens and the Broncos should meet again Monday night, Jan. 17 in the AFC wild card playoff round. The game could be billed “Blood, Guts and Gore in Baltimore."

Don King would be the promoter; Michael Buffer would exclaim, “Let’s get ready to rumble, tumble and fumble’’; Mike Tyson would toss the coin.

The Broncos definitely want a third postseason chance against the Ravens. They lost the other two.

Beat the Baltimore Colts-Cleveland Browns-Baltimore Ravens historical triumvirate. Then, if John Elway could have his way, the Broncos would defeat the new Cleveland Browns as he defeated the old Cleveland Browns. An ideal AFC title game would bring together the Broncos and the Chiefs or the Raiders. How about the Broncos in the Super Bowl against Buccaneers and Tom Brady, the Cardinals and Vance Joseph, the 49ers and Kyle Shanahan, the Packers and Aaron Rodgers or the Seahawks and Russell Wilson?

The Broncos first might try to win in Pittsburgh Sunday.

And Fangio was boiling Monday while discussing the Ravens.

With three seconds to go in Baltimore’s 23-7 routing of the Broncos Sunday, Harbaugh ordered his offense and, specifically, Jackson to run a student-body-left play to pick up more rushing yardage.

Lamar’s 5-yard gain gave the Ravens a total of 102 yards and tied a streak of 43 consecutives games with 100 or more yards rushing by the Steelers from 1974-77.

Oddly enough, the Ravens were limited to 77 running yards before their final drive to a field goal in the fourth quarter. The Broncos’ game plan was to stop the ground game by Jackson and three running backs who had rushed for more than 1,000 yards in their careers before being added as retreads recently by the Ravens. Jackson won with 316 yards passing.

Fangio was the first to figure out before the final play that Jackson wasn’t taking a knee to end the game. He lined up at shotgun. Fangio hollered at his defensive backs to get to the line, but he wasn’t heard.

As the game concluded, Fangio threw his headset. He and Harbaugh — who collaborated with the Ravens in 2008-09 — did a terse handshake.

But Fangio saved the brunt of his scathing salvo for the day after.

Asked Monday what he thought of the Ravens’ last play, the coach replied: “I thought it was kind of bulls---. I expected it from them. Thirty-seven years of pro ball, and I’ve never seen anything like that.’’ Then Fangio tossed a figurative grenade when asked why he expected the move. “That’s just their mode of operations there. Player safety is secondary.’’

What if Jackson had been blasted at the sideline and injured on the play? Bridgewater was the victim of a helmet hit in the first half — a penalty that was not flagged — and suffered a concussion. A play later, receiver-returner Diontae Spencer also was forced out with a chest injury on another blow by the Ravens the officials missed.

Harbaugh defended his decision after the game because he felt the rushing streak was important to the team — as if it were Joe DiMaggio’s hitting streak or Terrell Davis’ 2,000-yard rushing season.

But the war of the worlds was continued by Harbaugh when he was informed of Fangio’s fiery denunciation.

Harbaugh believed the two coaches were “on good terms. We’ve known each other for a long time.’’ However, he also was critical of the Broncos’ final meaningless drive when Fangio called three timeouts. “Throwing the ball in the end zone with 10 seconds left? I don’t know if there’s a 16-point touchdown that’s going to be possible right there,’’ he said sarcastically.

The coaches acted immaturely, as if one was rubber and the other glue.

Now, if only they confront each other once more in 105 days.

Broncos coach Vic Fangio upset with Ravens over final play: 'I thought it was b-------'

ENGLEWOOD — Broncos coach Vic Fangio was not happy with the Ravens on Sunday.