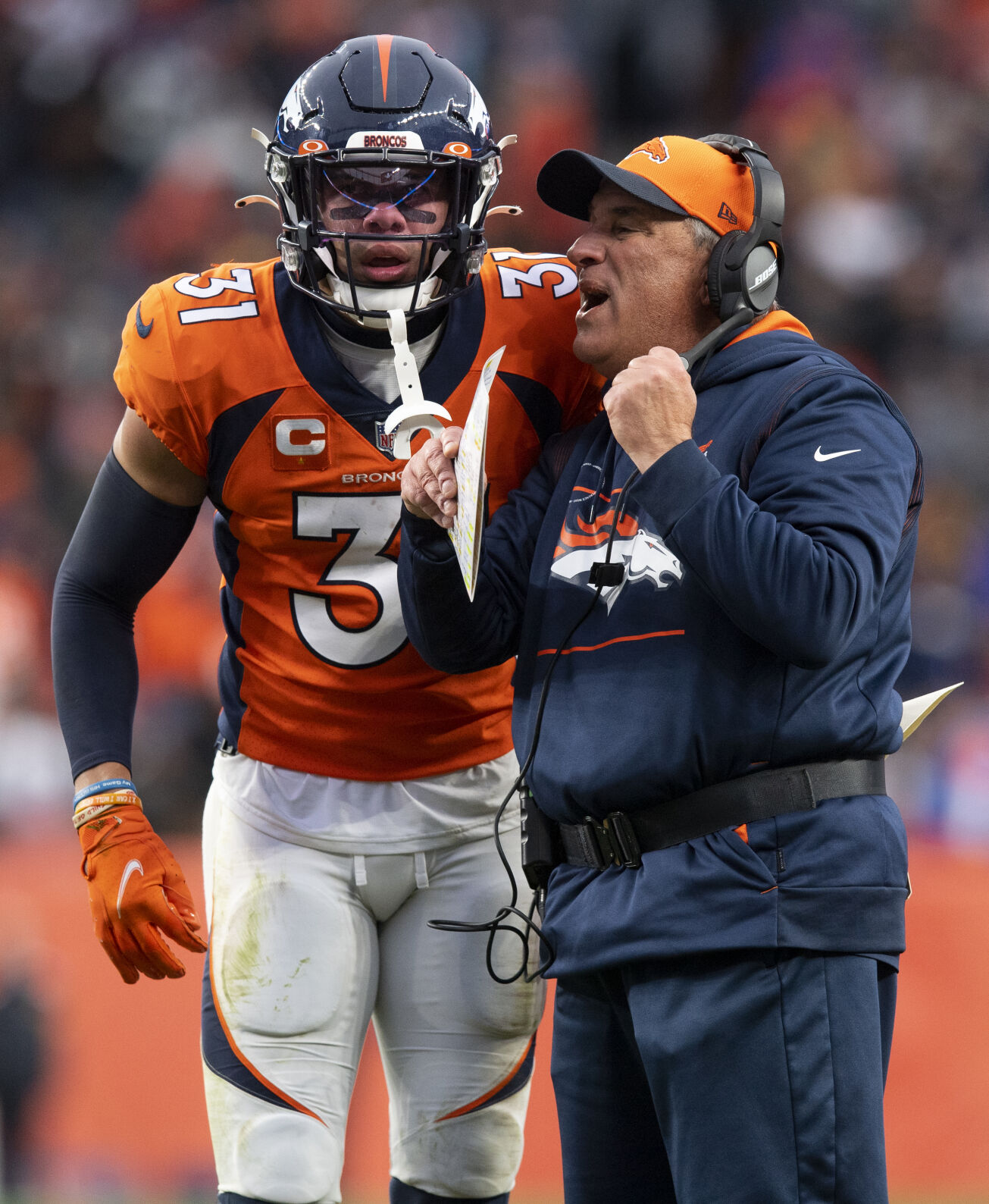 Broncos coach Vic Fangio talks to free safety Justin Simmons during a timeout in the fourth quarter Sunday in Denver. 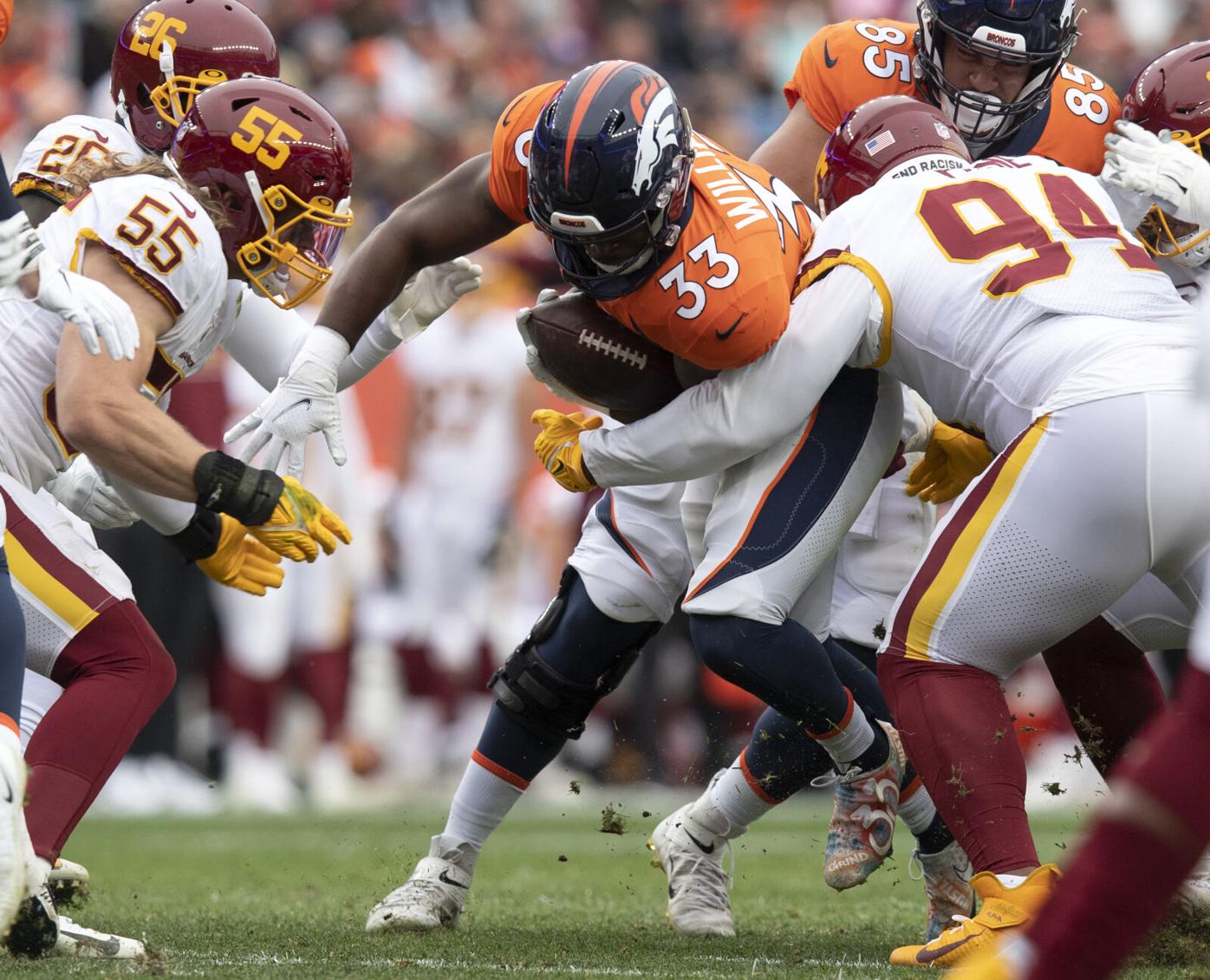 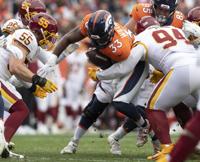 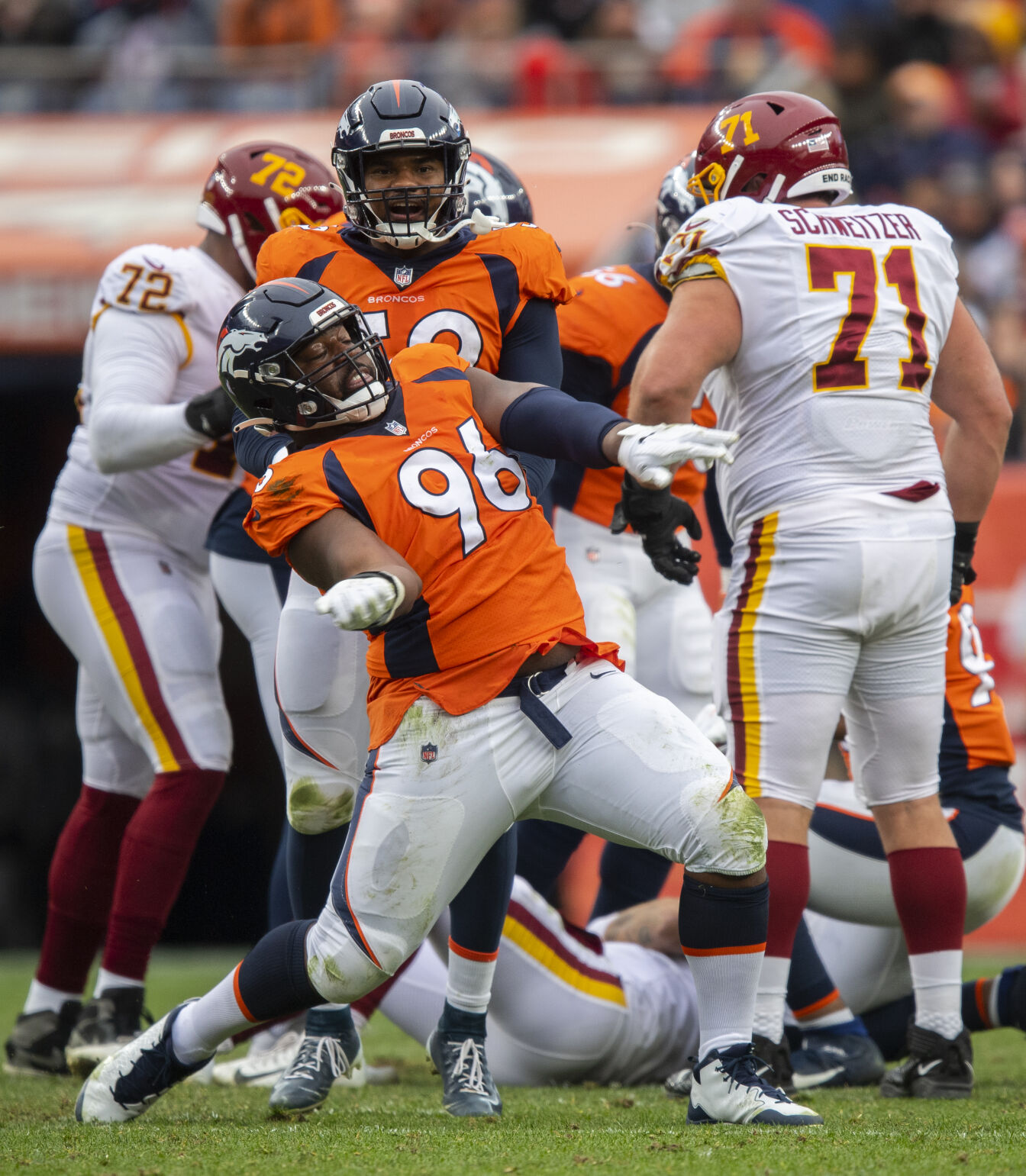 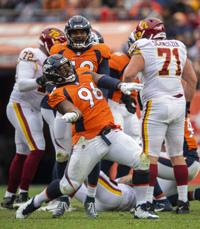 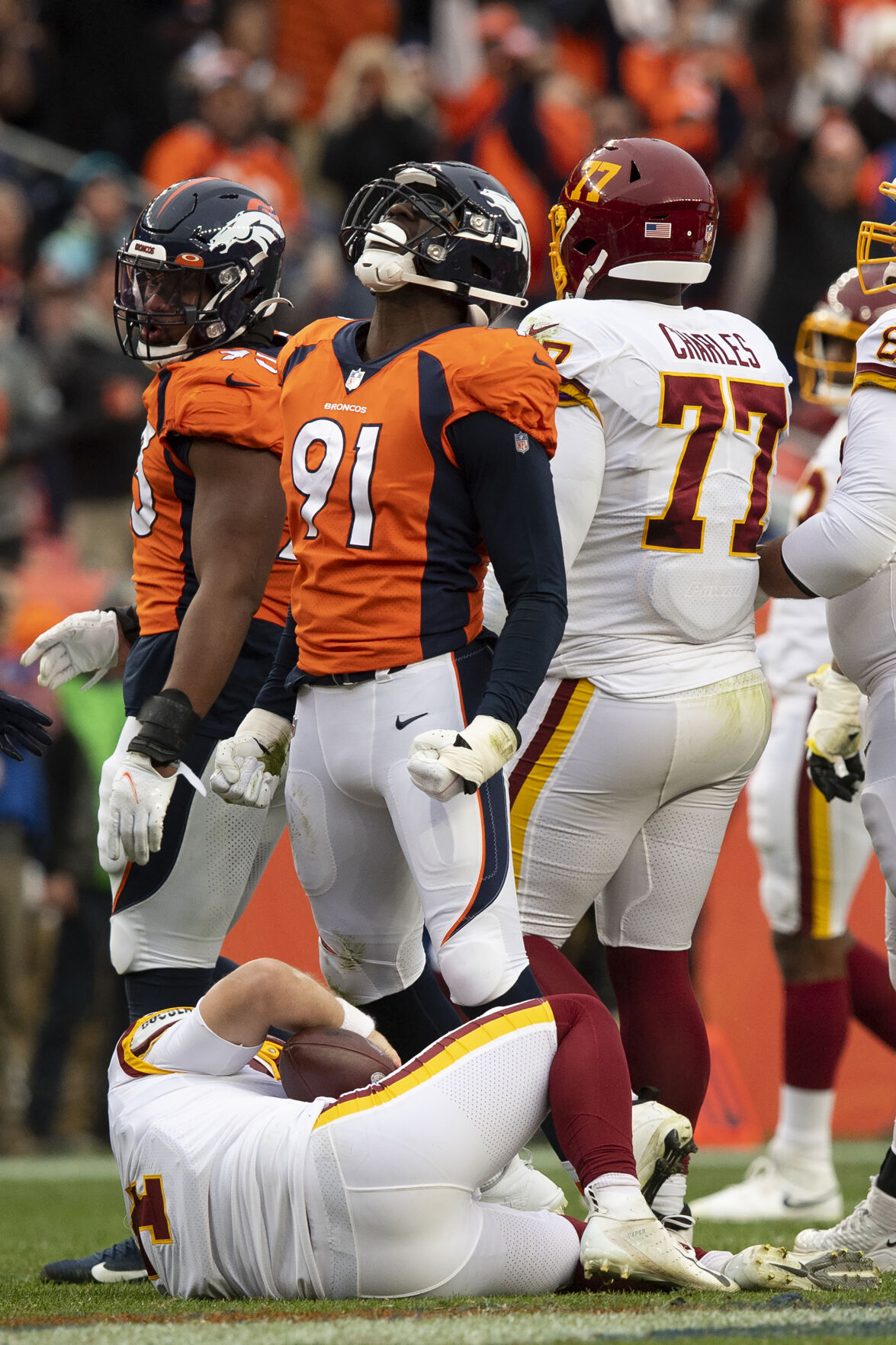 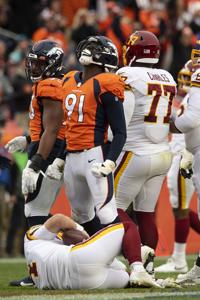 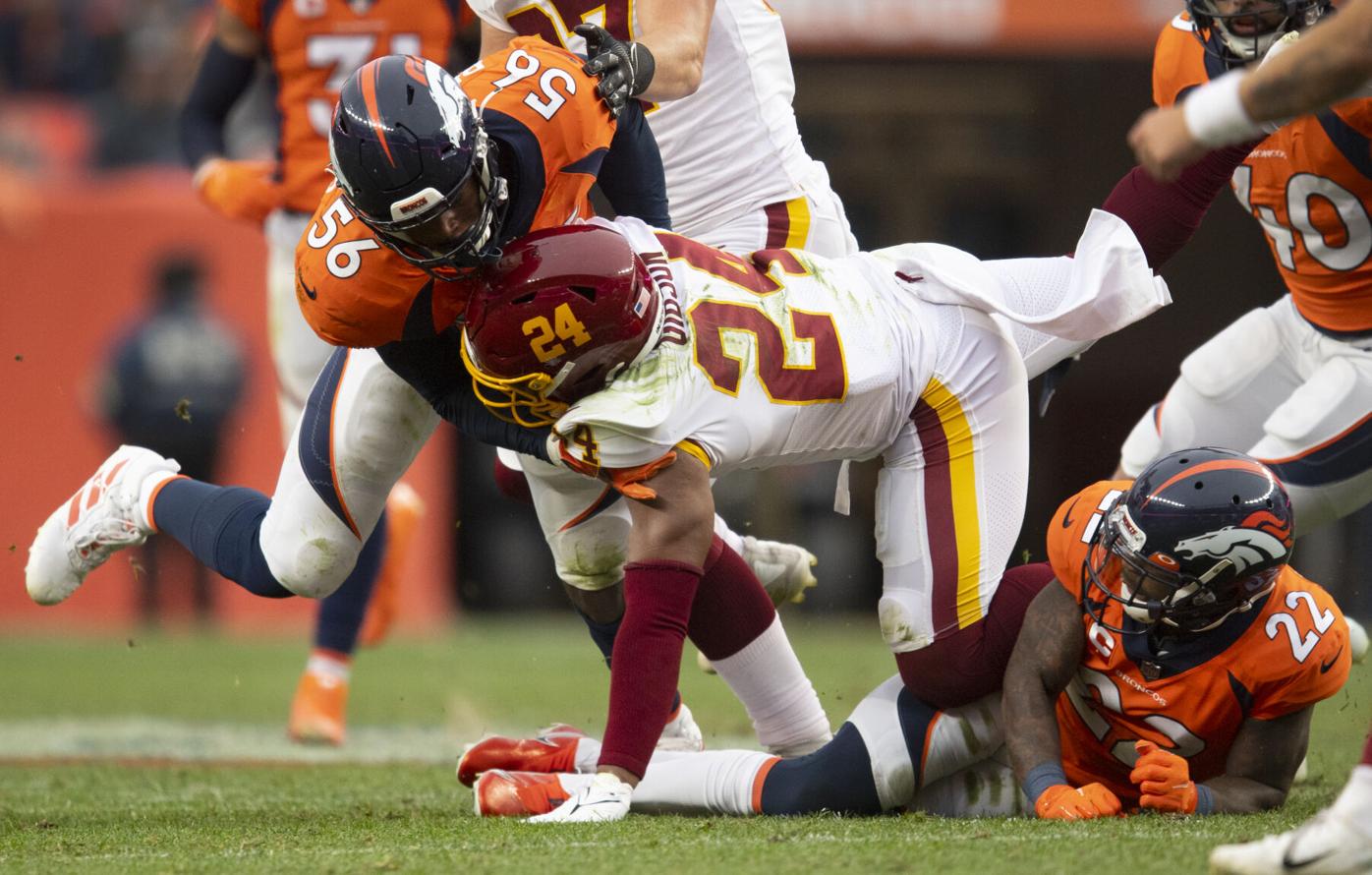 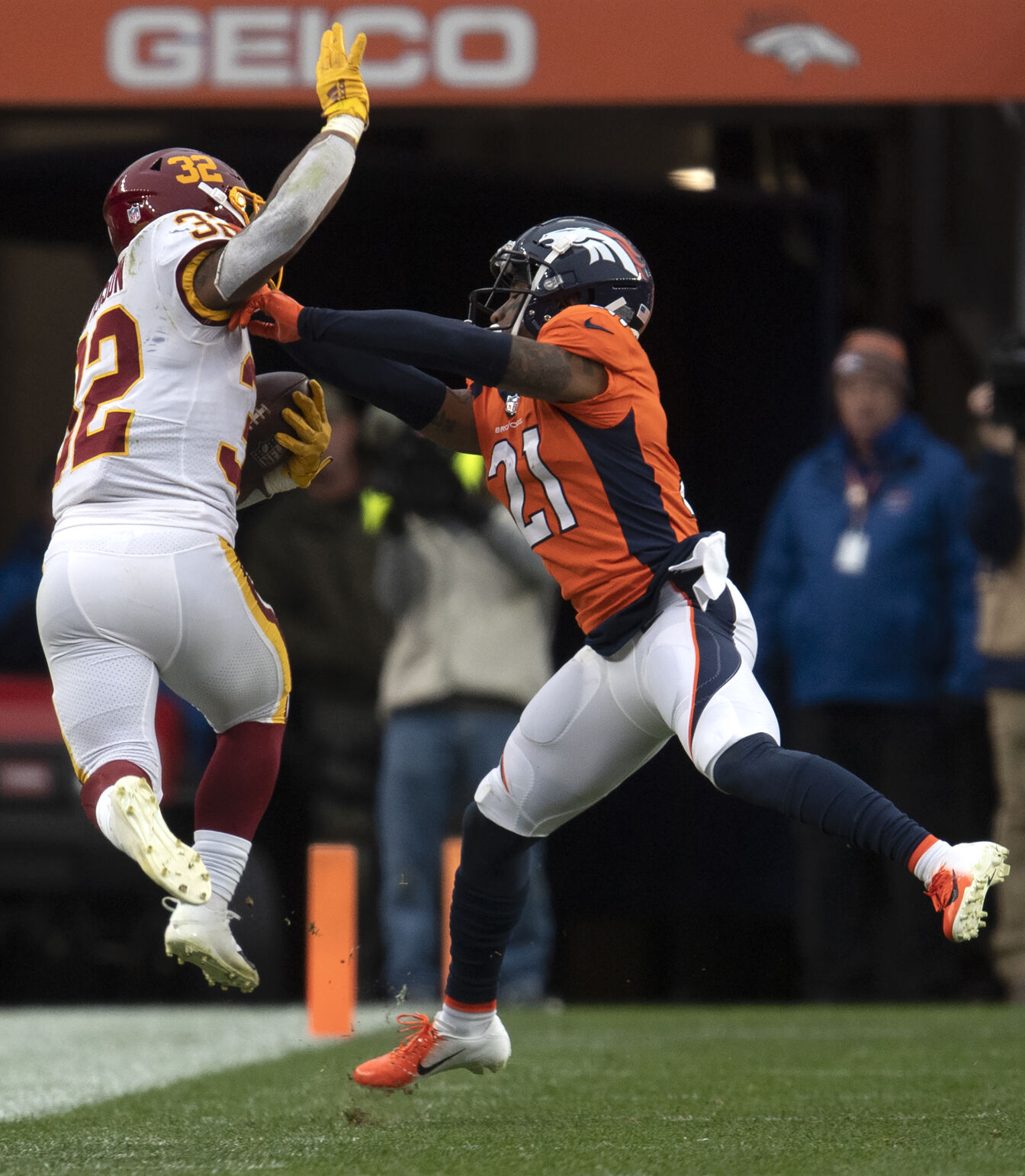 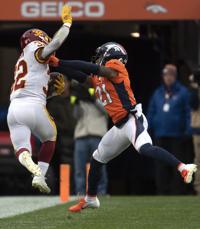 Washington Football Team running back Jaret Patterson (32) is pushed out of bound by Denver Broncos cornerback Ronald Darby (21) after a first down (32) during the third quarter Sunday, Oct. 31, 2021, at Empower Field at Mile High in Denver. Denver won 17-10.(The Gazette, Christian Murdock) 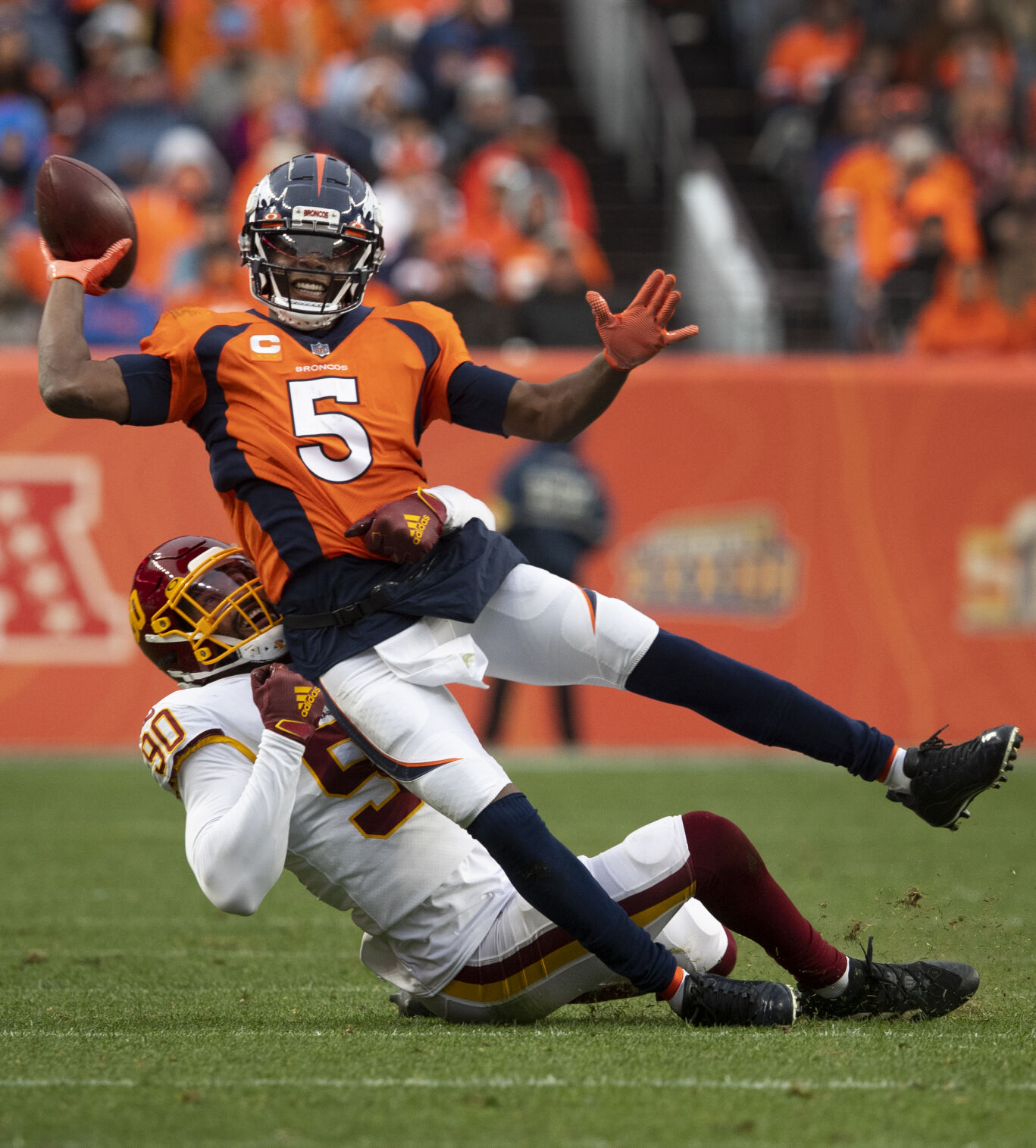 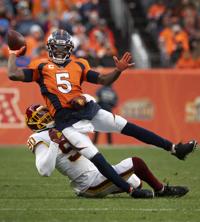 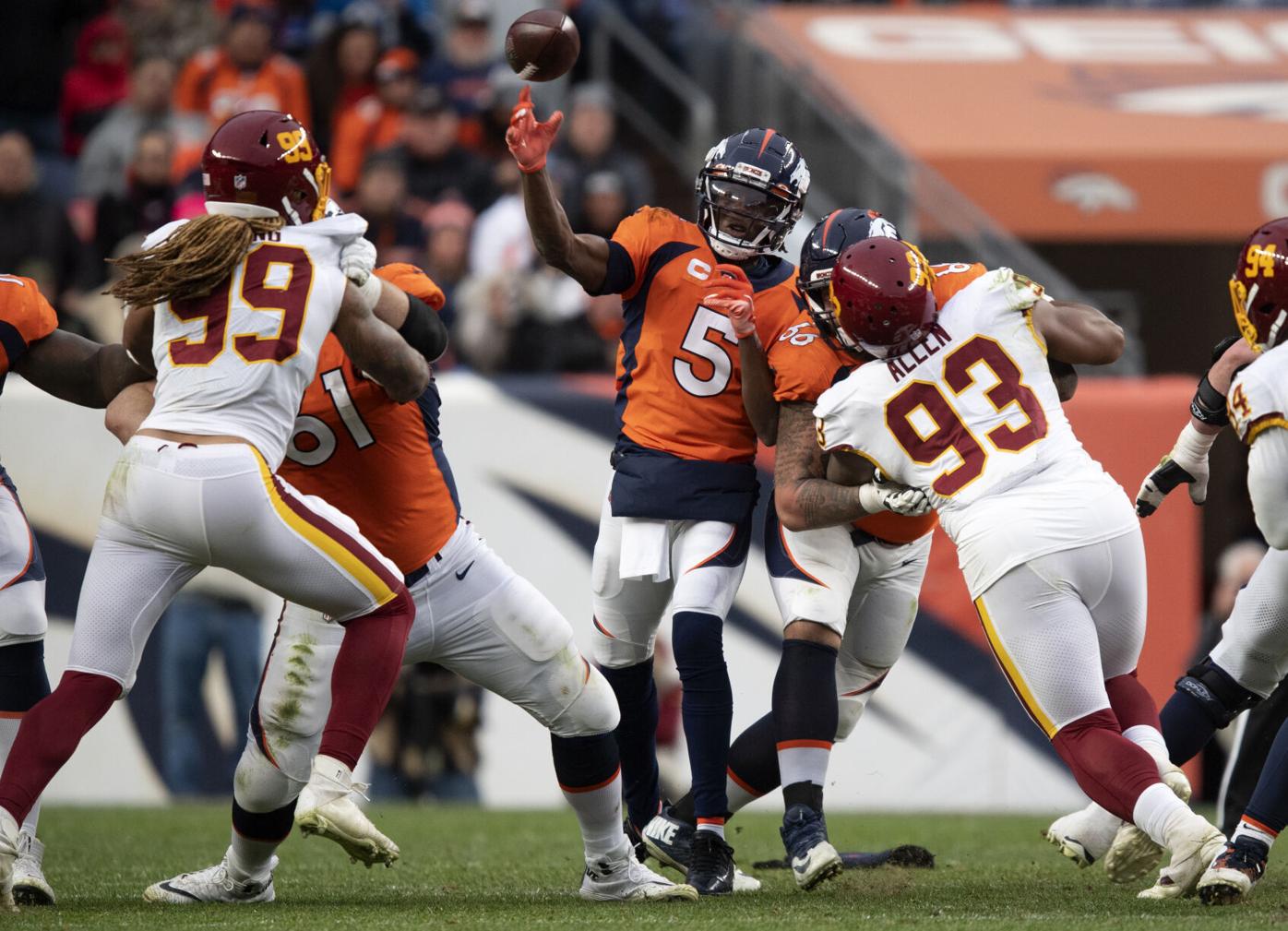 Broncos coach Vic Fangio talks to free safety Justin Simmons during a timeout in the fourth quarter Sunday in Denver.

Washington Football Team running back Jaret Patterson (32) is pushed out of bound by Denver Broncos cornerback Ronald Darby (21) after a first down (32) during the third quarter Sunday, Oct. 31, 2021, at Empower Field at Mile High in Denver. Denver won 17-10.(The Gazette, Christian Murdock)

The defense, full of grace, grit, and grind, saved the Broncos and the day. Near the end Sunday afternoon the Broncos’ offense acted like costumed clown characters and almost gave away the game as if it were Halloween candy corn. Thank goodness for the Washington badness.

The difference between victory and defeat were two interceptions in the end zone by Justin Simmons, two blocked field goal attempts by Shelby “Dikembe’’ Harris and Dre’Mont Jones, two sacks by Malik Reed and others shared by Harris, Jones and the two Stephens (Stephen Weatherly and Shamar Stephen), two forced fumbles, seven quarterback smashes and a crushing defense that constricted Washington Football Team to one touchdown, one field goal and three bloody Hail Mary’s.

The Broncos’ offense, which has averaged only 16.2 points in the five most recent games, had to express grateful gratitude afterward to its defensive brethren.

Oh, that was a game to match the miserable Denver day.

However, the Broncos are 4-4 and probably will be tied for third in the division with the Chiefs late Monday night.

Washington did prevail in yardage 342-296 and touchdown passes 1-0, but nothing else, and is stuck with a new kicker who barely got two attempts to rise above the long snapper’s rear, and a quarterback in Taylor Heinicke who was picked off on Hurl-Mary passes at the end of the first half and late in the game, and his final fling flew over beyond the end zone.

On Oct. 31, the Broncos won their first game of the month after losing four.

However, they were close to catastrophe. The Broncos were in danger of becoming like Washington’s kicker Chris Blewitt.

They nearly blew it.

Mile High was a negative force field, but let’s accentuate the positives for the Broncos.

Simmons caught the first and the second balloons to prevent what would have been fluky touchdowns. Justin produced his best game of the season with pair of interceptions, two passes defended perfectly and a couple of tackles. He played like a Pro Bowl, $61 million safety.

The Broncos’ defense has allowed only 27 points in two games. This is not the unit coach Vic Fangio anticipated before the season began. Five starters, including all four linebackers, are injured. Von Miller was ruled out Sunday to join Bradley Chubb, Alexander Johnson and Josey Jewel – and three backups. The Broncos were forced to play two linebackers who weren’t even on the roster a week ago.

Cornerback Bryce Callahan joined the wounded during the game, and left tackle Garett Bolles also had to leave with an injury. The Broncos may have hold practice this week in the Rose Medical Center parking lot.

Yet, the Broncos’ defense bent, but rarely broke against WFT. They surrendered five completions of 20-27 yards, one for a touchdown, but held the D.C. bunch to only 6 of 19 conversions on the third and fourth downs and 0-2 in the Red Zone.

The Broncos’ offense is another matter, though.

After Simmons’ second interception, the Broncos had the ball at their 22 with 37 seconds remaining and a supposedly insurmountable seven-point lead. On first down rookie runner Javonte Williams fumbled, but was judged down first. On second down, Teddy Bridgewater, for some unfathomable reason, threw an incomplete pass. What was he or coordinator Pat Shurmur thinking? They weren’t. The clock stopped. On third down Melvin Gordon III, who had rushed for two touchdowns and seemed to be the offensive player of the game, fumbled, and Washington recovered.

The coach called it “terrible, terrible.’’

WFT had 21 seconds and two timeouts to score from the 24. Heinicke, as usual, threw poorly, then was sacked, then threw poorly again and, finally, nearly threw the football into the stands on fourth down.

Those thousands who hadn’t stayed home or left early sighed.

It wasn’t a signature victory for the Broncos, but the decimated defense did the trick, and provided the treat.

Afterward in the locker room, the Broncos celebrated as if they had won the World Series. And Fangio flipped a game ball to Simmons, who praised his fellow defenders.

Hail, Justin Simmons. He was just in time.

Paul Klee: This hurts a little, but Broncos should do Von Miller a favor and trade him

DENVER — Peyton Manning didn't say no, but he also didn't say yes when asked Sunday if he has any interest in having a future role with the Broncos.