Denver Broncos quarterback Drew Lock (3) takes off his helmet after a play against the Las Vegas Raiders during the second half of an NFL game, Sunday, Nov. 15, 2020, in Las Vegas. 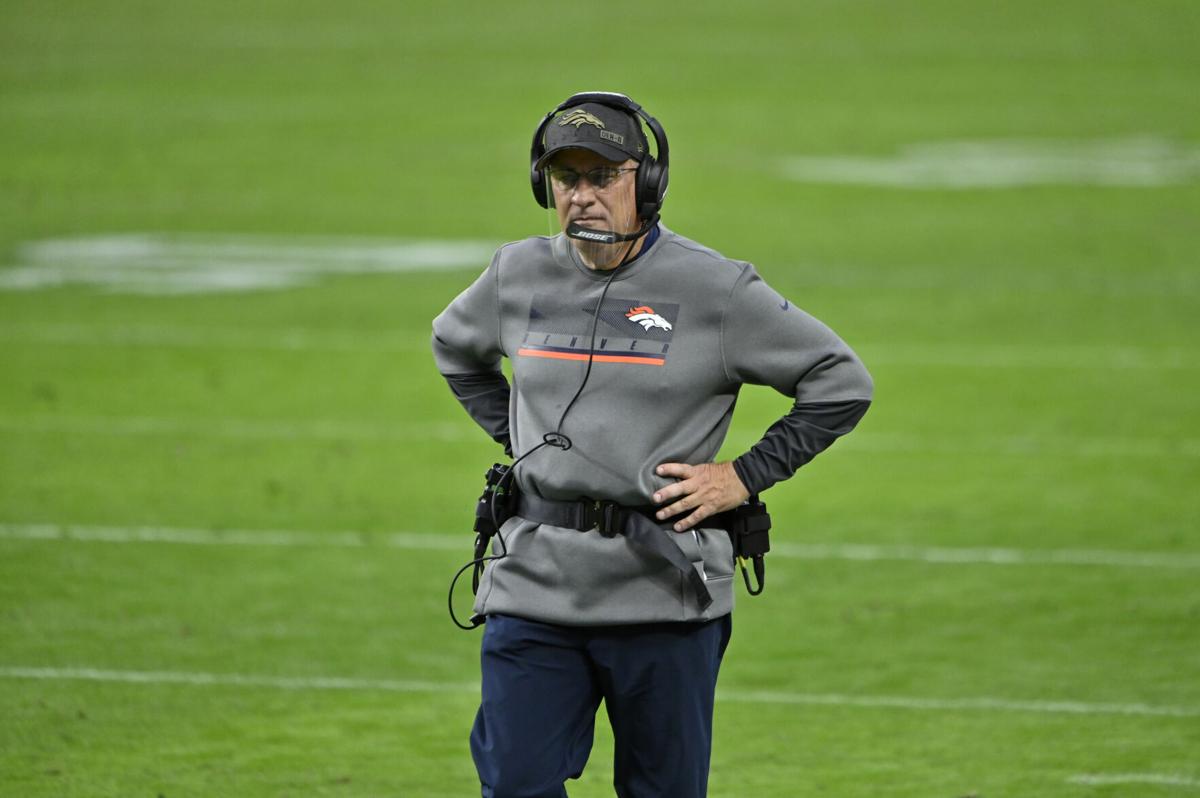 Denver Broncos quarterback Drew Lock (3) takes off his helmet after a play against the Las Vegas Raiders during the second half of an NFL game, Sunday, Nov. 15, 2020, in Las Vegas.

The Broncos can’t even count correctly to 11. Didn’t anybody here ever watch "Oceans Eleven'' or play craps and blackjack?

What happened in Vegas on Sunday can’t stay in Vegas.

But the franchise doesn’t have any kind of owner — and, under the organization’s orange-and-blueprint, won’t have a real owner for another five years or longer.

By then the Broncos could be the NFL’s version of the New York Knicks or, ye gads, the Colorado Rockies.

Instead, the Broncos have a three-person board of trustees, Ellis and two attorneys, and owner-in-waiting Brittany Bowlen.

The Broncos have gone from Pat Bowlen, a Hall of Fame owner, to a sinking ship without a captain.

The dreaded Raiders blasted the Broncos 37-12 in Las Vegas on Sunday.

“Everyone’s fingerprints are on that loss,’’ Fangio said.

Lock — who can talk the talk, but can’t walk the walk habitually — didn’t say much of anything worth repeating.

With 18 seconds remaining before halftime Lock ran around left end for a 5-yard touchdown to present the Broncos with a 12-10 lead. Yet, tight end Noah Fant was called for a holding penalty. With five seconds left, Lock threw an interception at the goal line. What else is new?

A 10-6 deficit was as close as the Bad News Broncos got.

On one play near their goal the Broncos had only nine players on the field as Raiders quarterback Derek Carr reached the line. A 10th player ran onto the field, and defensive backs were yelling “one short.’’ Running back Josh Jacobs raced around the left side, and nobody was home as he scored.

Soon the Broncos had 12 men on the field and were forced to call a timeout.

Eleven is supposed to be the proper football number.

Lock threw a career-high four interceptions, and receiver DaeSean Hamilton fumbled another pass to the Raiders. Guess who scored for Las Vegas? Devontae Booker, who spent three seasons with the Broncos before being dumped and picked up by the Raiders. Booker’s 81 rushing yards and two touchdowns (as a backup) was more impressive than the meager cumulative totals of all three current Broncos running backs.

The 3-6 Broncos are headed toward seven games against five potential playoff teams (Dolphins, Saints, Chiefs again, Bills and Raiders again) and two teams (Panthers, Chargers) they can lose to, too.

This defeat was the most humiliating of an awful season. The Raiders belonged as the main attraction in a show room on The Strip, while the Broncos were lizards in a lounge act. The stage was established immediately on the opening kickoff when Diontae Spencer got the ball at the 2-yard line, started left, reversed to the right and was tackled at the 5. If that wasn’t sufficient, the Broncos were penalized half the short distance to the goal for holding.

The Broncos truthfully can’t beat a winning team, and haven’t and most likely won’t. A 4-12 record would be reminiscent of 2010 and Josh McDaniels, and the Broncos are back to that terrible type of team. Peyton Manning is not coming through the door.

The late Mr. Bowlen once had a coach with what the owner termed a “lifetime’’ contract. However, Mike Shanahan, who had guided the Broncos and Elway to two Super Bowl championships, struggled from 2006-2008 with a 24-24 record (a glowing achievement in comparison to the Broncos’ 2017-2020 mark of 21-36), and Bowlen decided Shanahan’s lifecycle in Denver was done.

Bowlen’s oldest daughters from his first marriage — Amie Klemmer and Beth Bowlen Wallace — filed a lawsuit against the Broncos’ quasi-leadership, the three trustees, that was scheduled to be heard by an Arapahoe County district judge in September, but the court action has been delayed until next year.

The franchise’s obstinate slogan annually seems to be “Wait until next year.”

Everybody in the world wants 2020 to be over. Especially the Broncos’ faithful after the Vegas Debacle.

This all goes back to John Elway and, for a rare time, not in a good way. No. 7’s final football comeback is out of reach.