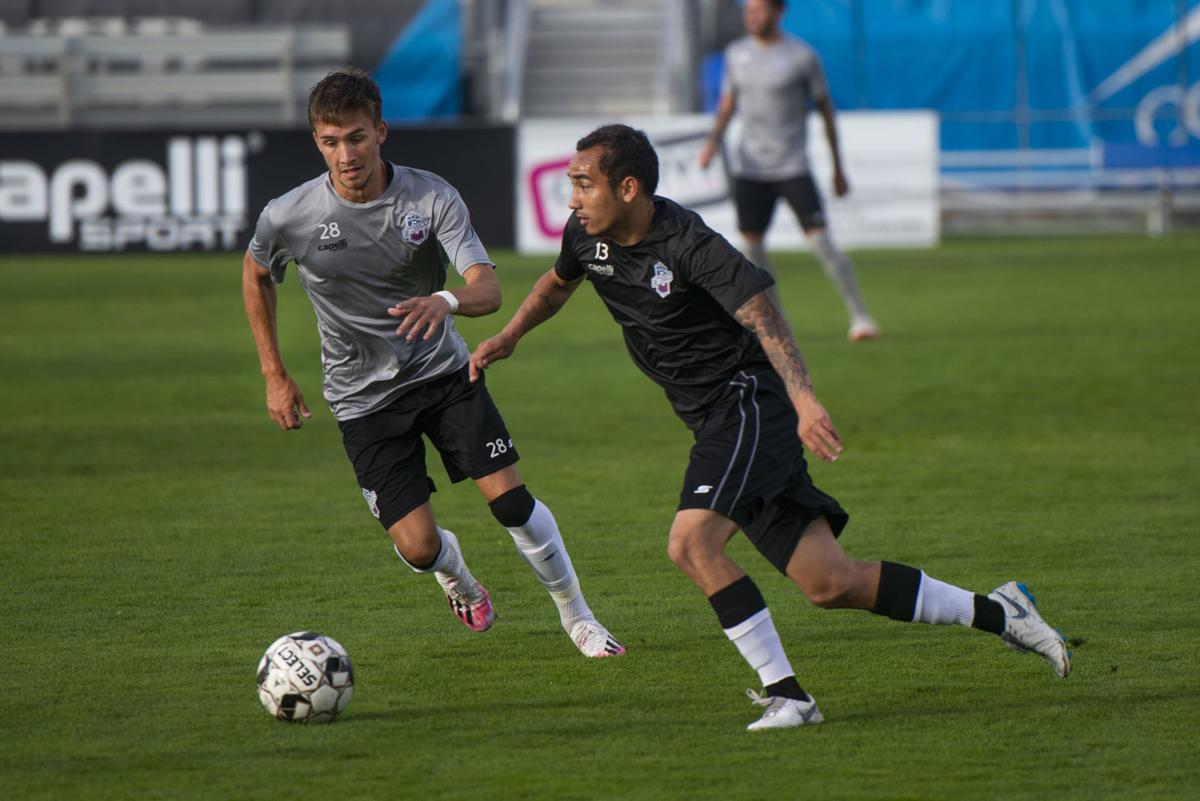 Switchbacks midfielders Will Vint and Aidan Daniels chase the ball during a scrimmage on Saturday, July 4, 2020 at Weidner Field in Colorado Springs, Colorado. (Katie Klann/The Gazette) 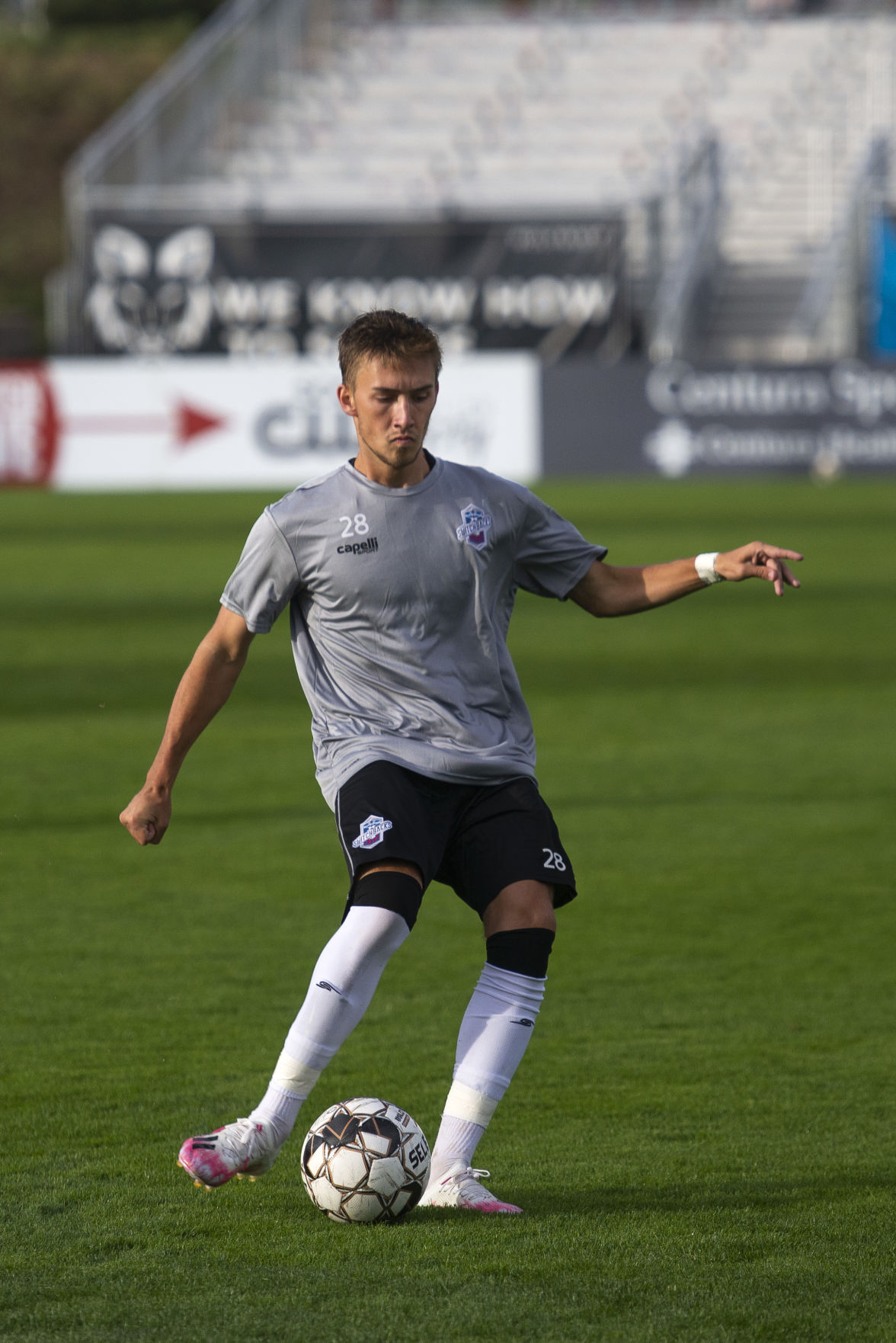 Switchbacks midfielder Will Vint kicks the ball during a scrimmage on Saturday, July 4, 2020 at Weidner Field in Colorado Springs, Colorado. (Katie Klann/The Gazette)

Switchbacks midfielders Will Vint and Aidan Daniels chase the ball during a scrimmage on Saturday, July 4, 2020 at Weidner Field in Colorado Springs, Colorado. (Katie Klann/The Gazette)

Switchbacks midfielder Will Vint kicks the ball during a scrimmage on Saturday, July 4, 2020 at Weidner Field in Colorado Springs, Colorado. (Katie Klann/The Gazette)

Colorado Springs served as a launching point for Will Vint’s soccer experience once before, and the young midfielder hopes a strong season with Switchbacks FC sees his career take off again.

Vint, 18, grew up playing for Pride Soccer Club here before moving on to Real Colorado. From there, he earned academy spots at two of England’s most decorated professional clubs: Everton and later Manchester United. He still remembers coming home from school and his parents telling him of United’s interest.

“I get chills just thinking about it,” Vint said Friday after the Switchbacks' practice.

“It’s a great environment. The thing for them is just full-on development.”

But the time in Manchester was shorter than planned. His visa expired soon after he signed a scholarship to continue at the academy with the under-18 squad.

“Pretty much got kicked out of the country,” Vint said.

He returned to America and made his professional debut with Atlanta United 2 last season, scoring one goal and adding an assist in 16 appearances in the United Soccer League Championship. His homegrown rights were traded to Colorado Rapids for a draft pick in March, and he was loaned to Switchbacks FC for the 2020 season where he’s made an impression on coach Alan Koch.

“Very, very technically sound, excellent young professional. At the same time, he’s still young. He’s still got to learn to play the game at the professional level, and he’s had some very good experiences which has set him up to get to this point,” Koch said. “But now I think it’s about the rest of this year and maybe even next year, seizing moments and showing that he can manage those moments in the game.”

He looked comfortable in a big moment during last week’s intrasquad scrimmage. Koch said it was Vint “at his finest.” The young defensive midfielder’s curling set piece in front of friends, family and former coaches provided the second goal in a 2-0 win for his team. Now it’s about replicating those moments in matches that count, and his next opportunity could come Saturday against New Mexico United.

“We’re all absolutely buzzing to get out there tomorrow,” Vint said.

His short-term goals include getting regular minutes and breaking into the starting 11 in Colorado Springs, hoping that’s enough to get a chance to impress during the Rapids’ 2021 preseason.

Though his English experience didn’t go according to plan, he credited his time with Everton and Manchester United with preparing him mentally and physically for the American professional game. His father, renowned sports scientist and USA Volleyball’s new Chief of Sport Dr. Peter Vint, was previously the academy director at Everton, but his son said the influence ended after a call few summers before he officially joined the academy. When dad left the club, so did son, again not by choice.

“They actually kicked me out, too, which kind of sucked,” Vint said. “It was a really tough point after that ... I was almost going to give up.”

He didn’t do much for a month before joining his school team and later local club, Chester FC. He eventually attracted interest from Manchester United after playing in a youth tournament hosted by the club. The Reds eventually offered him an academy spot two weeks into a six-week trial, and he would play for the under-15 and -16 teams before he was forced to return stateside. Now, he hopes to make the most of his second professional season in the city he grew up in.

“At the beginning, I was (angry), but now it’s like that was a couple of years ago,” Vint said of the English exit. “What can I possibly do about that? Literally nothing, so I’ll leave it and do my best here. And you never know what’s going to happen in the future.”

Colorado Springs Switchbacks set to welcome up to 1,000 fans to Saturday's match with safety measures in place

Colorado Springs Switchbacks FC will play a role in a big day for the United Soccer League.