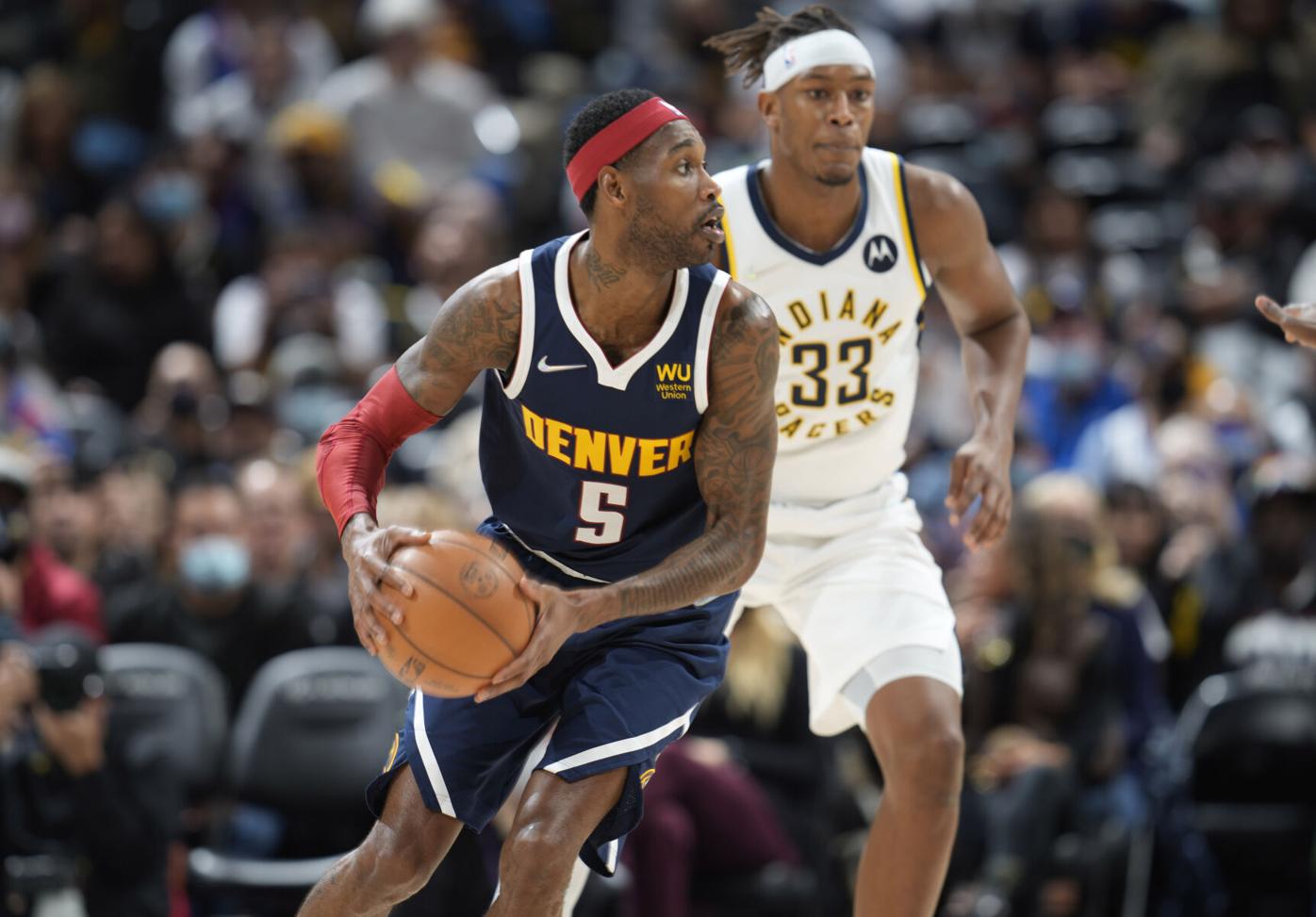 Denver Nuggets forward Will Barton, front, is defended by Indiana Pacers center Myles Turner during the second half of an NBA basketball game Wednesday, Nov. 10, 2021, in Denver. (AP Photo/David Zalubowski) 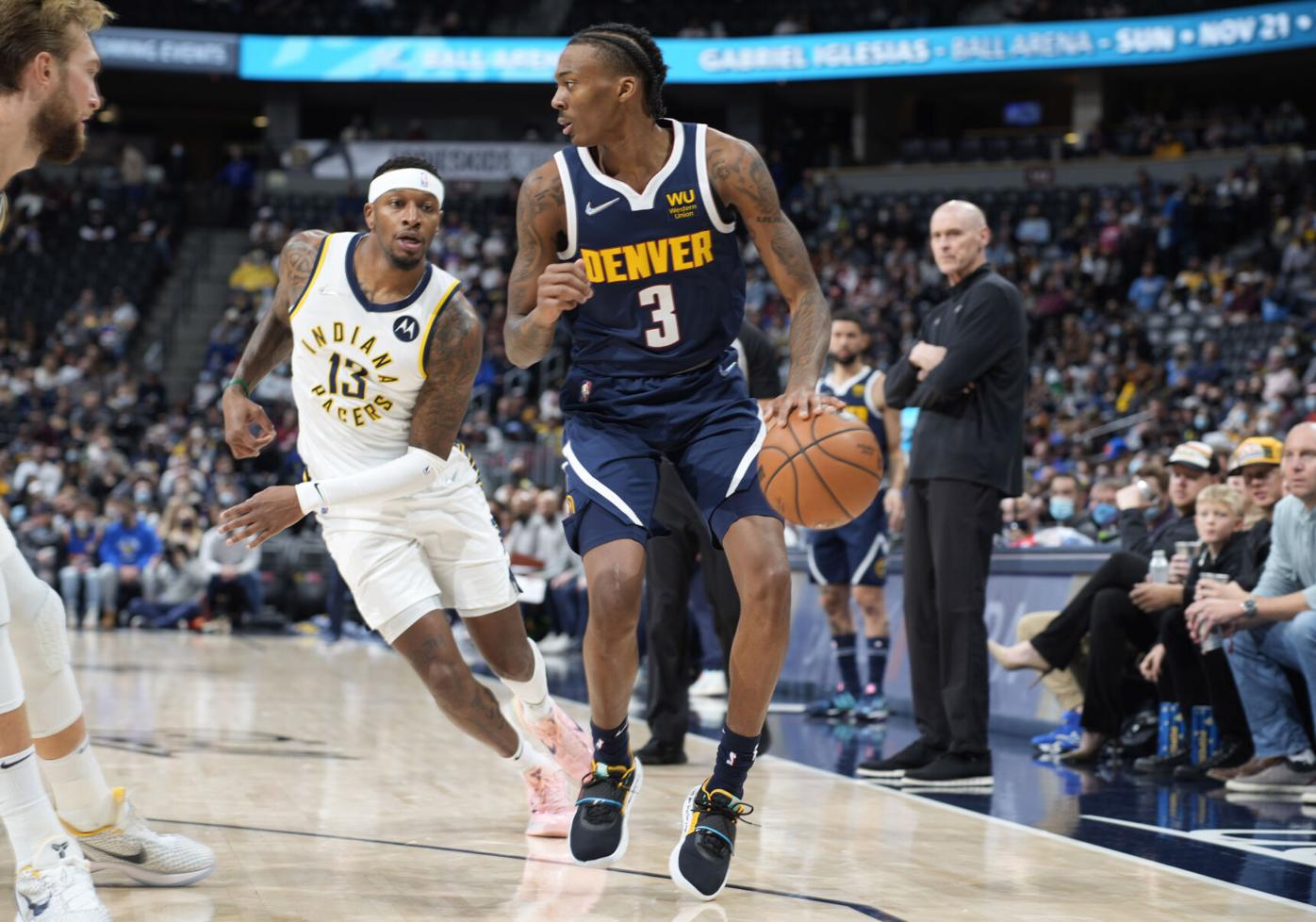 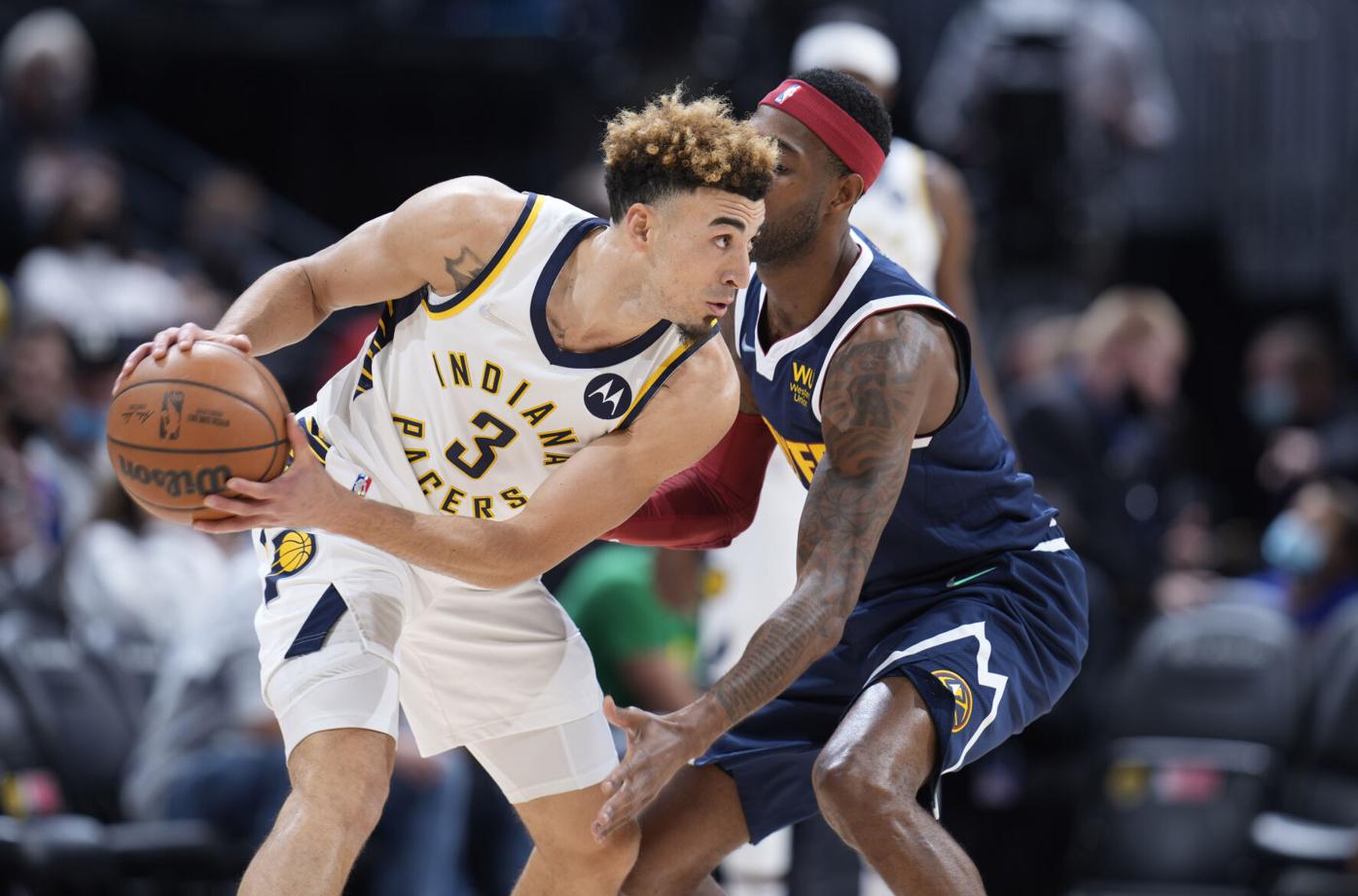 Denver Nuggets forward Will Barton, front, is defended by Indiana Pacers center Myles Turner during the second half of an NBA basketball game Wednesday, Nov. 10, 2021, in Denver. (AP Photo/David Zalubowski)

DENVER – Will Barton III put on a show worthy of the spotlight in the shorthanded Denver Nuggets’ 101-98 win over the Indiana Pacers on Wednesday at Ball Arena.

With the Nuggets playing without star center Nikola Jokic, who served a one-game suspension, or the injured Michael Porter Jr. (back) and Jamal Murray (knee), Barton put up 30 points, grabbed six rebounds, dished out three assists and came up with two steals.

“Will Barton is playing at the highest level I’ve ever seen him play at,” Nuggets coach Michael Malone said. “He’s shooting into a very big basket. He’s living for the moment. He’s defending. He’s just all around playing at such a high level, and I’m so happy for him, because the last two years, we haven’t seen that Will Barton because of injuries.”

The biggest of Barton’s 11 buckets came with 27.2 seconds left. After Aaron Gordon won a jump ball against Pacers center Myles Turner, Barton used a Gordon screen, drove to his right and kissed a shot off the glass to put the Nuggets up four.

“I feel real comfortable in those situations. I’m a guy that can score, and I’m a guy that can play make, so I know all I have to do is make a good read, which I usually do, and then decide from there. If I have the shot, I’m going to take it. If not, I’ll make the pass,” Barton said.

“It’s just about being calm in those situations and doing what I do.”

Rookie Bones Hyland hit a free throw the put the Nuggets up 3 with six seconds left and earned praise for his take foul that left the Pacers two seconds to get a tying shot off. Jeremy Lamb caught the ball near midcourt and rushed a shot that came off the backboard and side of the rim.

Beyond Barton, the Nuggets got 19 points and five rebounds from Zeke Nnaji, a second-year player who has not been in the rotation when Jokic has been available.

“He kept it very, very simple tonight. He knocked down a couple of jump shots, and I thought he played some really good defense as well. A really good performance, and that’s key for a young kid,” Malone said.

“What he’s shown to me is that he can help us win an NBA game in meaningful minutes. That’s how you kind of get your foot in the door.”

“We wouldn’t this game without him, without his contributions,” Barton said, sharing the spotlight.

“He’s just got to stay confident. We all knew he could play. I mean, this is a guy who went one-and-done, first-round pick.”

“Bones is awesome. We get along really well. Everyone loves him, and I feel like we have pretty good chemistry,” Nnaji said. “He knows where to find me, where I like to have the ball. I got most of my buckets from him, so I definitely owe him a dinner.”

“I’m getting more and more comfortable being out there,” Hyland said. “As you can see, a lot more stuff is being displayed, and I’m showing a lot more.”

Brogdon led the Pacers with 25 points, while Domantas Sabonis added 20.

With Jokic watching at home with a glass of wine, according to Malone, the Nuggets started Morris, Barton, Gordon, Jeff Green and JaMychal Green.

The Nuggets scored the first eight points behind a pair of Barton 3-pointers and a mid-range shot by Morris, but Indiana closed within three by the end of the first quarter.

Former Nugget Torrey Craig gave the Pacers their first lead with a pair of free throws with four minutes left in the second quarter. Indiana increased the lead to four later in the second quarter, but Morris hit a 3-pointer with less than two seconds left to tie it at 44 after two quarters.

The Pacers would lead by as many as eight in the third quarter after a Sabonis three-point play. The Nuggets answered with nine straight points to regain a lead after Barton hit a 3 and finished a transition layup. Buckets from Hyland, Nnaji and PJ Dozier in the final minutes of the third quarter had the Nuggets up four to start the fourth.

The Nuggets led for good after Nnaji’s 3-pointer with just under eight minutes left, though the Pacers would close within a point multiple times.

The Nuggets will welcome Jokic back into the fold when Denver hosts the Atlanta Hawks on Friday at Ball Arena, though Barton might find the spotlight anyway.

“Will’s always in the spotlight,” Malone joked. “Let’s be honest.”