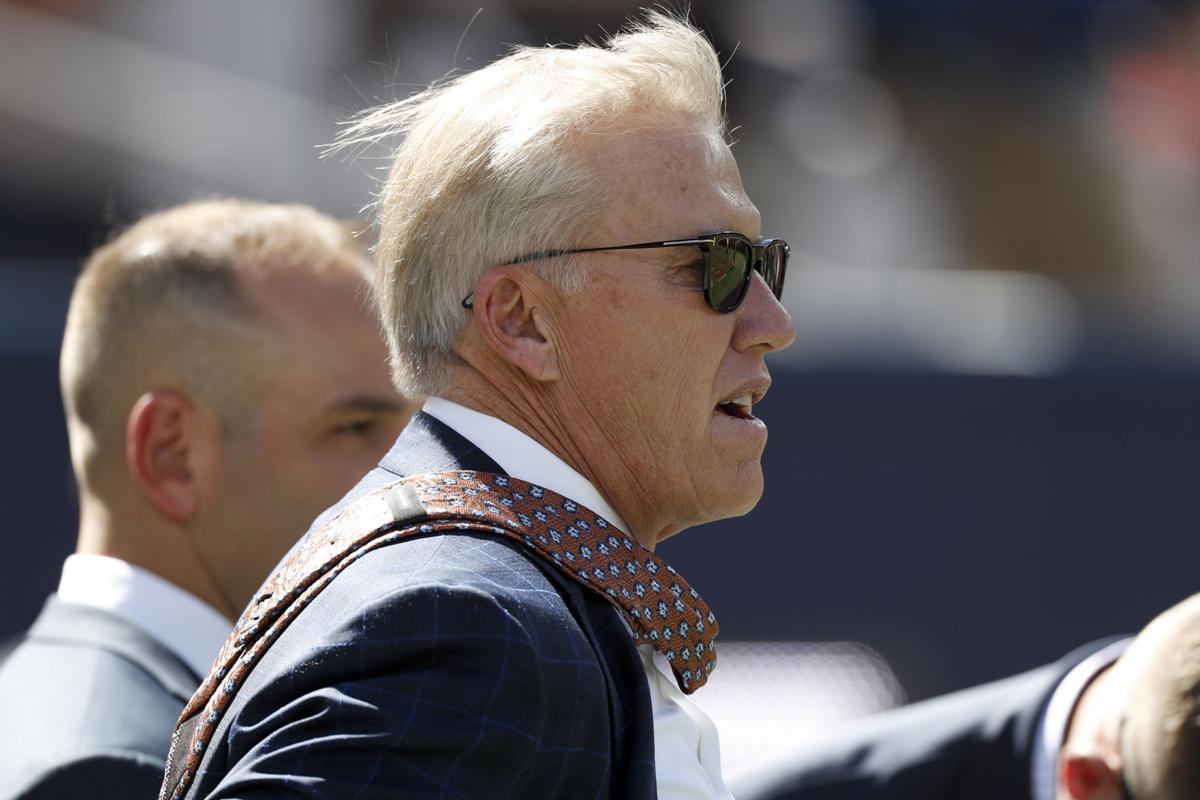 Broncos general manager John Elway looks on before a Sept. 29 game against Jacksonville in Denver. 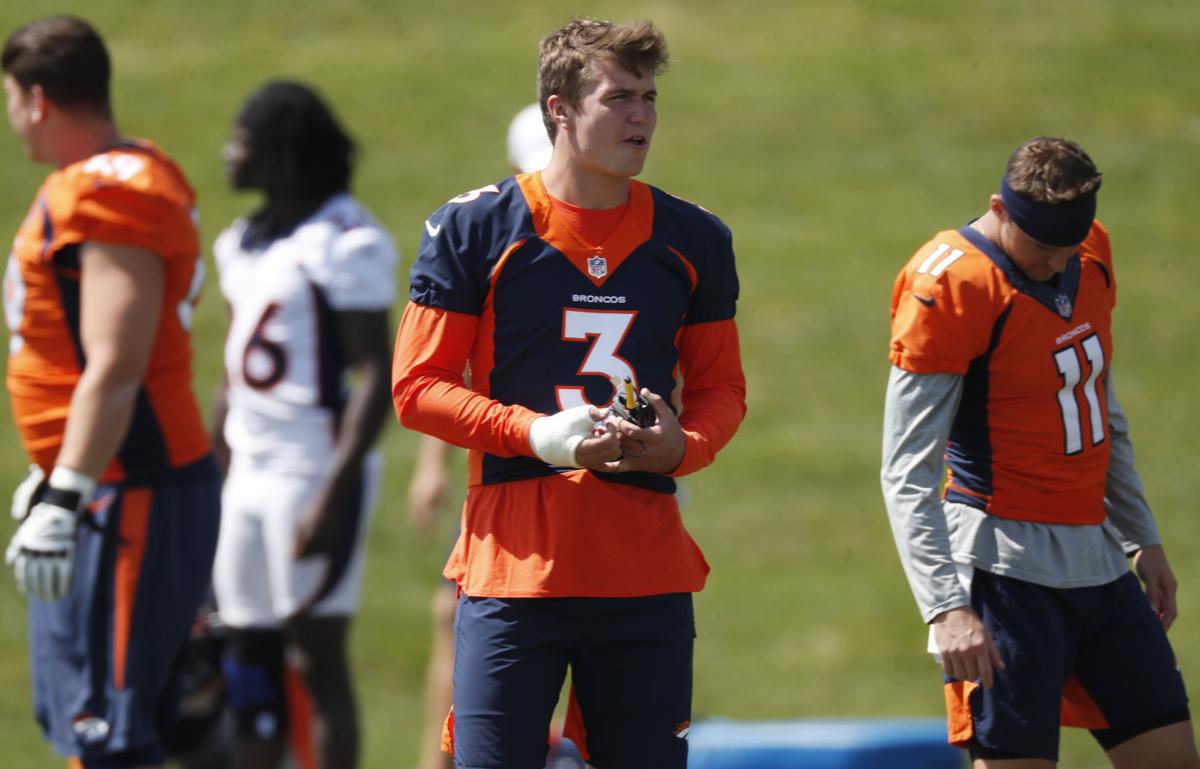 His right hand wrapped because of a thumb injury, Broncos rookie quarterback Drew Lock looks on as teammates take part in practice Aug. 27 at team headquarters in Englewood. Lock is still on injured reserve but is being released and is scheduled to practice Tuesday.

Broncos general manager John Elway looks on before a Sept. 29 game against Jacksonville in Denver.

His right hand wrapped because of a thumb injury, Broncos rookie quarterback Drew Lock looks on as teammates take part in practice Aug. 27 at team headquarters in Englewood. Lock is still on injured reserve but is being released and is scheduled to practice Tuesday.

DENVER • Drew Lock trusts the Broncos and their plan for the rookie quarterback.

”I think they have an awesome plan,” he said.

What’s been lost in Broncos Country, aside from 27 of the past 38 games, is trust. Trust in the Broncos choosing a quarterback, as first-time starter Brandon Allen on Sunday against the Browns becomes the sixth starter here since Peyton Manning. Trust in holding players accountable, as left tackle Garret Bolles makes another maddening start. Trust in John Elway, of all Coloradans, and the front office to clean up this stinky mess.

“Do I trust him to fix what’s gone (wrong)? No,” former offensive lineman Mark Schlereth said on Fox Sports 1.

Dang. That tickles. It’s a no good, very bad day when ex-Broncos lose trust in the operation. It’s worse when fans do. Tickets for the final four games at Empower Field at Mile High can be had on Stubhub.com for $80 (Browns), $62 (Chargers), $57 (Lions) and $74 (Raiders) — unheard-of pricing on the secondary market for Broncos games in Denver.

It used to be that Coors and the Broncos were the trustworthy-iest operations around these hills. Now the beer’s leaving and watching the Broncos requires several. (Right now, Coors? Really?) You could count on the Broncos being good most of the time — a .598 winning percentage under the late Pat Bowlen that ranks fourth in all of pro sports, just behind the Pittsburgh Steelers, just ahead of the Los Angeles Lakers, and the most regular-season wins in the NFL since 1984 (333, or a boatload). The Broncos were a Colorado constant. These days they are constantly not trusted.

How can we trust Lock is not another Brock Osweiler or Paxton Lynch when the 22-year-old rookie is not allowed to practice even when healthy? Weeks after he was eligible to rejoin them on the practice field, Lock is still caged as an injured reserve. How can you trust Von Miller is still worth the price of admission after playing 52 snaps without a tackle against the Chiefs? Dang. That tickles too. Still can’t believe it.

How does one repair broken trust? Not once, not twice, but three times the esteemed defense has failed to prevent last-minute scores in losses to the Bears, Chiefs and Jags. Trust the ‘D’? Not when that kind of stuff is happening.

Halloween’s no scarier than this: Since Week 3 of the 2017 season — a telling span of 38 games — the Broncos have the same number of losses as the Cleveland Browns. Twenty-seven.

The Broncos are one of four franchises with 90-plus wins in three decades (‘80s, ‘90s, 2000s). They need six wins in the final eight games for a fourth decade. I trust you’re not betting on it. They’re not favored at home against the 2-5 Browns, so who knows if they are favored again the rest of the way?

The Broncos would have the fewest points in the NFC — aside from the Redskins, who, of course, employ last season’s Broncos quarterback, Case Keenum. Elway’s mission of finding a long-term quarterback is easier said than done. Not many out there. The Chiefs just went almost a quarter-century between theirs. But Lynch, Osweiler, Keenum, Joe Flacco and Trevor Siemian have not been even close. Siemian should still be here, as the backup, at least to slide a toe in the revolving door in case of emergency, such as the neck injury to Joe Flacco that ended his season. Friday it was announced Flacco will join Lock among the injured reserves.

The Broncos believed Flacco was entering his prime. If they don’t bring him back in 2020, he could be entering retirement. And the Broncos enter an NFL Sunday with three quarterbacks who have never taken a regular-season snap in the league — Allen, Brett Rypien and Lock.

Elway said on 850 KOA they are “looking at” activating Lock prior to Week 11 at Minnesota.

“Whenever they feel like they want to put that plan in place, I’ll be good,” Lock said.