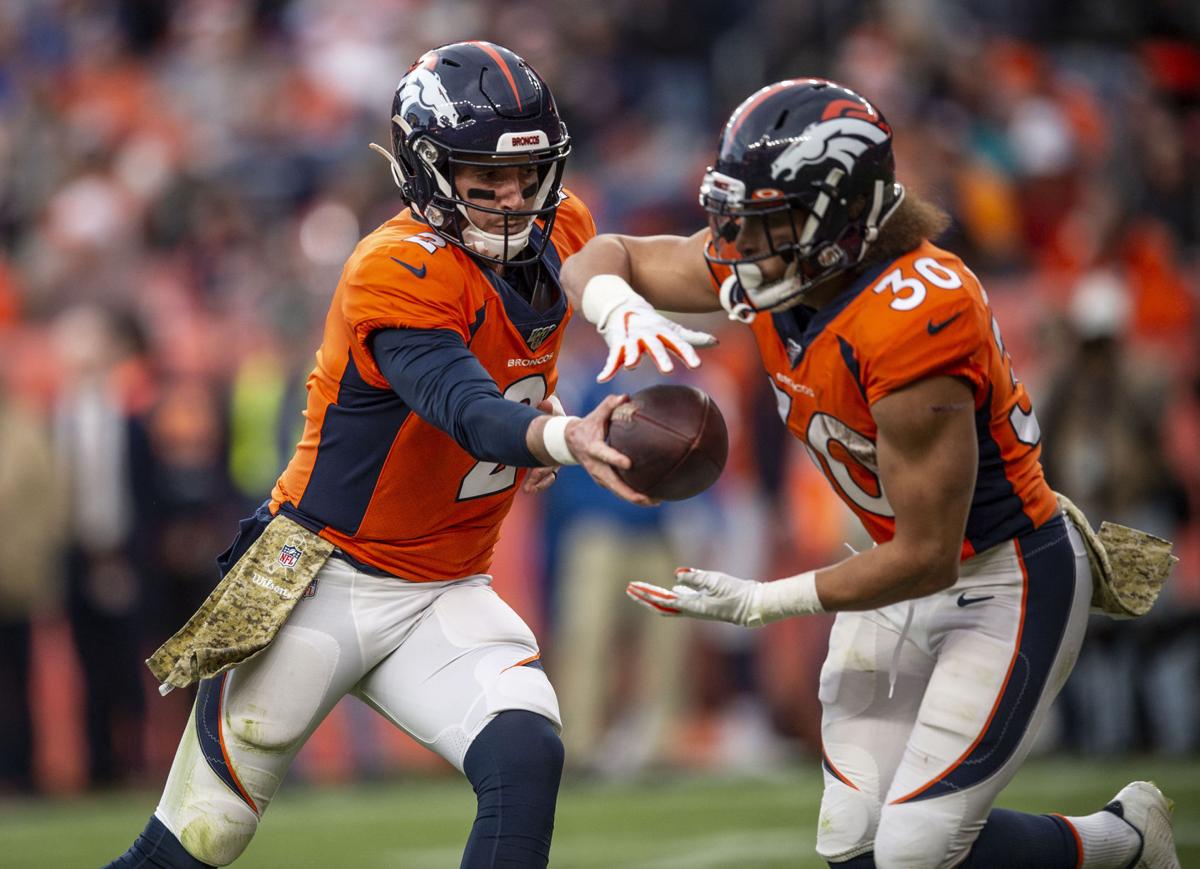 Broncos quarterback Brandon Allen (2) hands off the ball to running back Phillip Lindsay during the Denver Broncos home game against the Cleveland Browns at the Denver Broncos at Mile High in Denver on Sunday, Nov. 3, 2019. The Broncos defeated the Browns by a score of 24-19. Chancey Bush/ The Gazette) 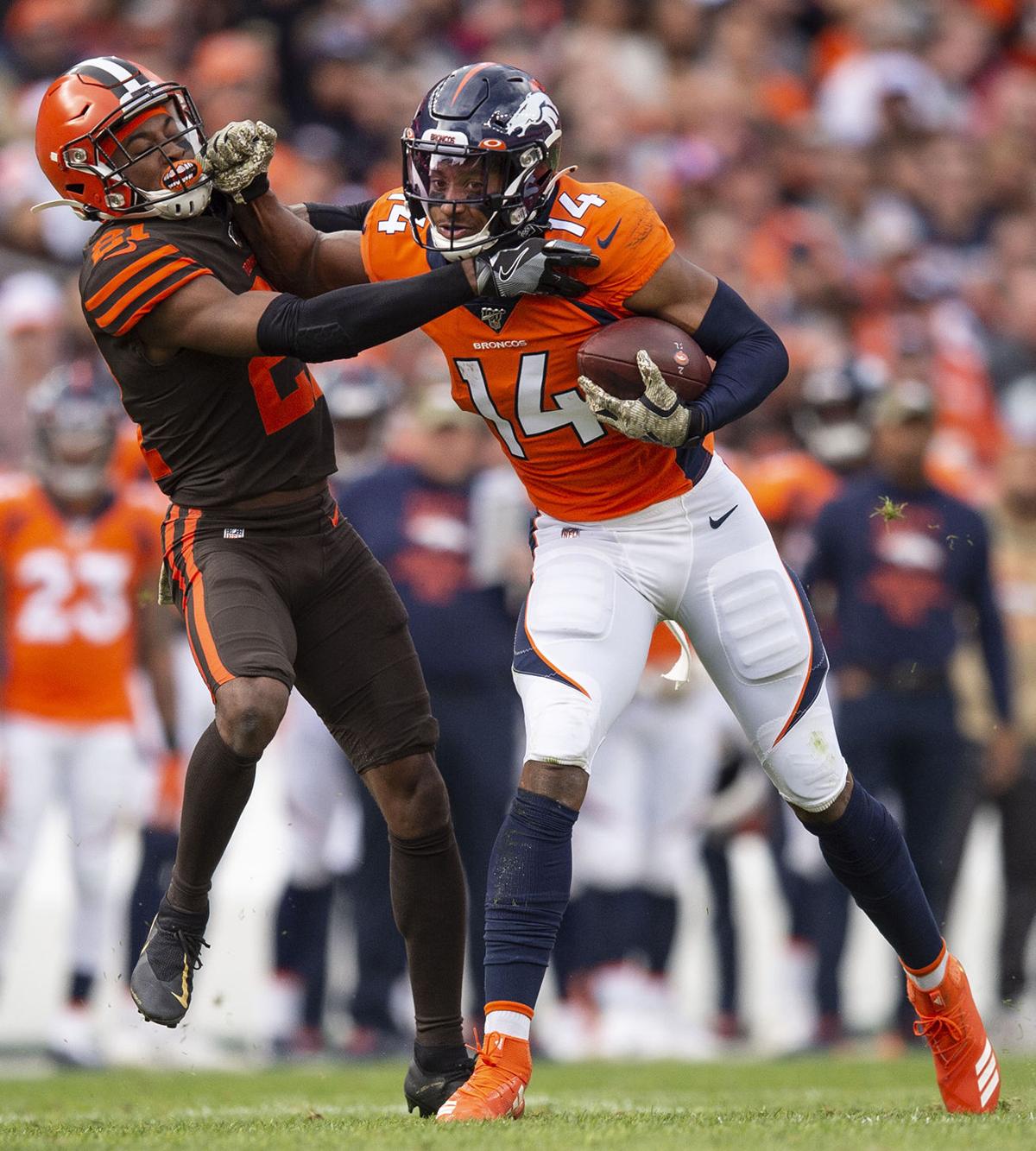 Broncos wide receiver Courtland Sutton (14) stiff arms Browns corner back Denzel Ward (21)during the first quarter of the Denver Broncos home game against the Cleveland Browns at the Denver Broncos at Mile High in Denver on Sunday, Nov. 3, 2019. Chancey Bush/ The Gazette)

Broncos quarterback Brandon Allen (2) hands off the ball to running back Phillip Lindsay during the Denver Broncos home game against the Cleveland Browns at the Denver Broncos at Mile High in Denver on Sunday, Nov. 3, 2019. The Broncos defeated the Browns by a score of 24-19. Chancey Bush/ The Gazette)

Broncos wide receiver Courtland Sutton (14) stiff arms Browns corner back Denzel Ward (21)during the first quarter of the Denver Broncos home game against the Cleveland Browns at the Denver Broncos at Mile High in Denver on Sunday, Nov. 3, 2019. Chancey Bush/ The Gazette)

ALLENTOWN, Colo. — His family didn’t smother Brandon Allen after the Brandon Allen Game on Sunday. Fifteen hugs, a couple of playful jabs from his brothers, Austin and Christian, a pat on the back from his sweetheart of a dad, Bobby Allen.

Nothing crazy, though. After Brandon Allen’s friends and family (15 in all) left their primo seats in Section 101, Rows 6 and Row 7, to meet the Broncos’ unsung and undefeated quarterback in a back tunnel at Empower Field at Mile High, they went to dinner — at Brandon’s house. No Shanahan’s or Elway’s for these folks.

“Nice, quiet night,” Bobby Allen told The Gazette. “Just going to enjoy it all together.”

Nice, quiet night — after the backup quarterback no one's heard of spelled Joe Flacco and deftly guided the Broncos to a 24-19 win over Baker Mayfield and the Cleveland Browns.

Nice, quiet night. Sure. And the Colorado River is a nice, quiet creek trickling through the Rockies.

“They’re playing with a guy that had never started a game in the NFL,” Browns coach Freddie Kitchens underscored.

Perhaps it’s true the Broncos didn’t have the quarterback of the future in training camp; Brandon Allen spent his with the Los Angeles Rams. But he’s here now, and the fairy-tale first start of his pro career finished with Vic Fangio handing him the game ball as the MVP. Brandon Allen's like Baker Mayfield in only one way: we are obligated to say both his first name and last name, not one or the other. Brandon Allen hit his first completion to Courtland Sutton, a 2-yard job; his first touchdown pass to Sutton, a 21-yard toss he wasn’t fond of (“worst pass of the day”); his longest pass to Noah Fant, a 75-yarder that also represented the Broncos’ longest scoring play through eight games. All told, Brandon Allen went 12 of 20 for 193 yards, two touchdowns, no interceptions and a stunning passer rating of 125.6 — the third-best rating for a Broncos debut, trailing Peyton Manning (129.2) and Brock Osweiler (125.6).

Stunning, of course, if you don’t read The Gazette. Bobby Allen portended his son’s performance in Sunday’s edition: "Brandon doesn’t get rattled. He’ll be OK."

“Made some throws I’m sure he’d like to have back,” Bobby said Sunday. He’s a former defensive coordinator at Arkansas. "But that’s going to happen. I thought he played well. He’ll learn from this and get better. Smart guy.”

See, not a lot of hoorays! and high-fives from the Allens. They're used to this. Dad was a college quarterback/kicker/linebacker at Virginia Tech, now works at Arkansas. Austin led the SEC in passing yards at Arkansas. Brandon set the school record there with 64 touchdowns. Football's old hat with a Southern drawl.

"He was cold in college," said another SEC guy, Von Miller.

The Allens 100-percent expected “BA” to play well — even after only one week of practicing with the starters, a tall order by any measure.

“I hope to win a few more,” Allen said after the game. “This is hopefully the first of many.”

Woody Paige: Milestone moment for the Denver Broncos in victory and 'Brownout'

Who is this guy? Sixth-round pick of the Jaguars in the 2016 draft. Waived by the Jags and Rams. Signed to the Rams’ practice squad. Waived again by the Rams. Claimed by the Broncos — only six days before the season opener this year. In a twist of irony, the Broncos dug what they saw from Allen when he opposed them, in a preseason game against the Rams in August

“We’re not ready to put him in Canton yet,” Fangio said. “But overall (we’re) pleased with the way he played.”

Pleased? Shoot, Sunday couldn’t have played out better for the Broncos. Hesitant to play previously injured Drew Lock as a rookie behind a struggling offensive line, the Broncos enter their bye week knowing they can stay competitive if Allen stays healthy. Plus, the snakebitten defense held up strong against a late surge by Mayfield and the Browns — something the 'D' failed to do against the Bears, Jags and Colts.

Allen’s midseason debut lacked the hype machine of another SEC quarterback, Tim Tebow, though Tebow’s Broncos were 1-4 (Allen’s were 2-6) and Allen ended the game by taking a knee (Allen-ing?). Allen’s eye black did not include a Bible verse, but his long-shot story adds much-needed pizzazz to a Broncos season that was more like a pizza slice sans toppings.

“Adversity either makes you tougher or makes you quit. Look what it did for him,” veteran defensive lineman Derek Wolfe said of Allen. “Made him tougher, made him a better football player. Who knows what’s in the future for him?”

Sunday night, it was dinner at home, nice and quiet. Brandon Allen took three footballs with him — the ball from his first touchdown pass (Sutton saved it for him), the ball he pitched to the referee at the final horn (and promptly requested back), the game ball awarded to him.

“I feel like when Lil Wayne found Drake,” Von Miller said of the quarterback discovery.

It's not time for Drew Lock. But you can see Drew Lock's time from here, Paul Klee writes.