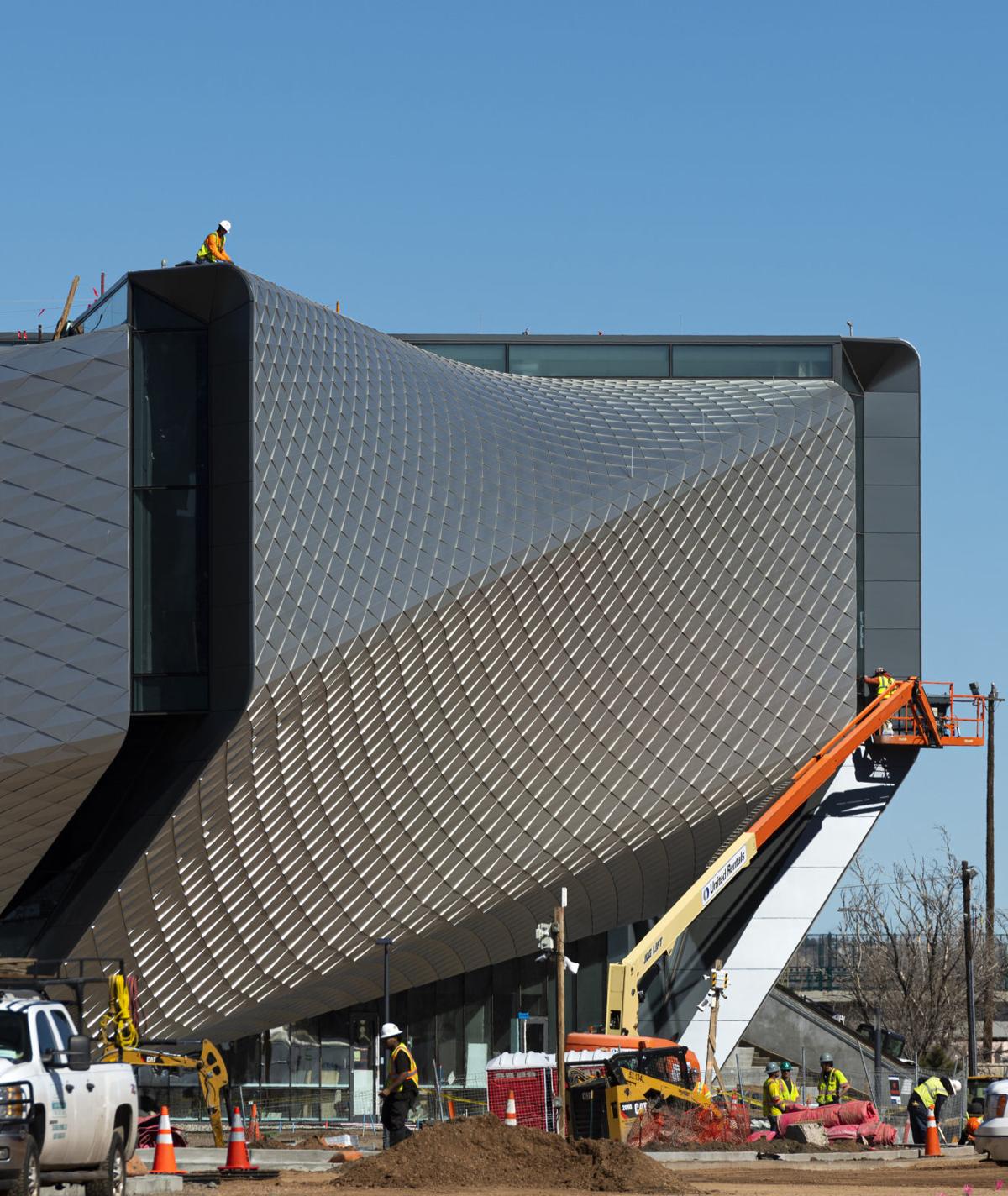 Construction crews in late March worked on the exterior of the U.S. Olympic and Paralympic Museum on downtown Colorado Springs’ southwest side. 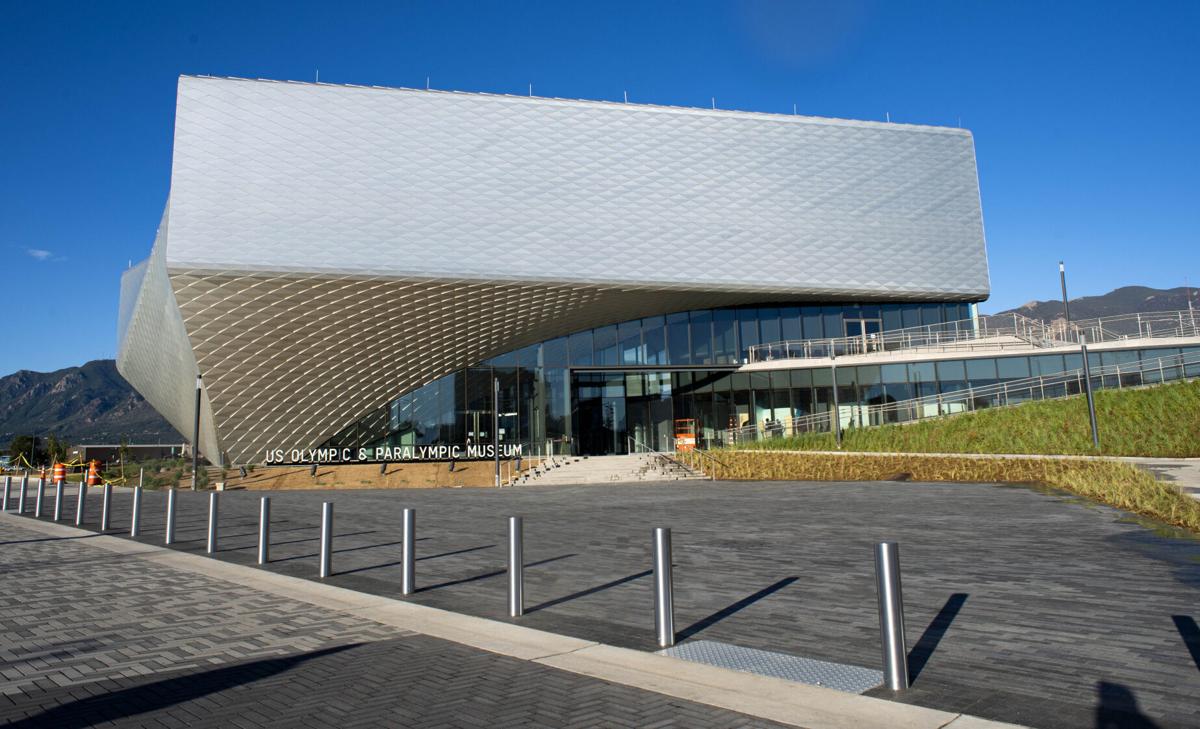 The U.S. Olympic and Paralympic Museum in Colorado Springs is slated to open next week. 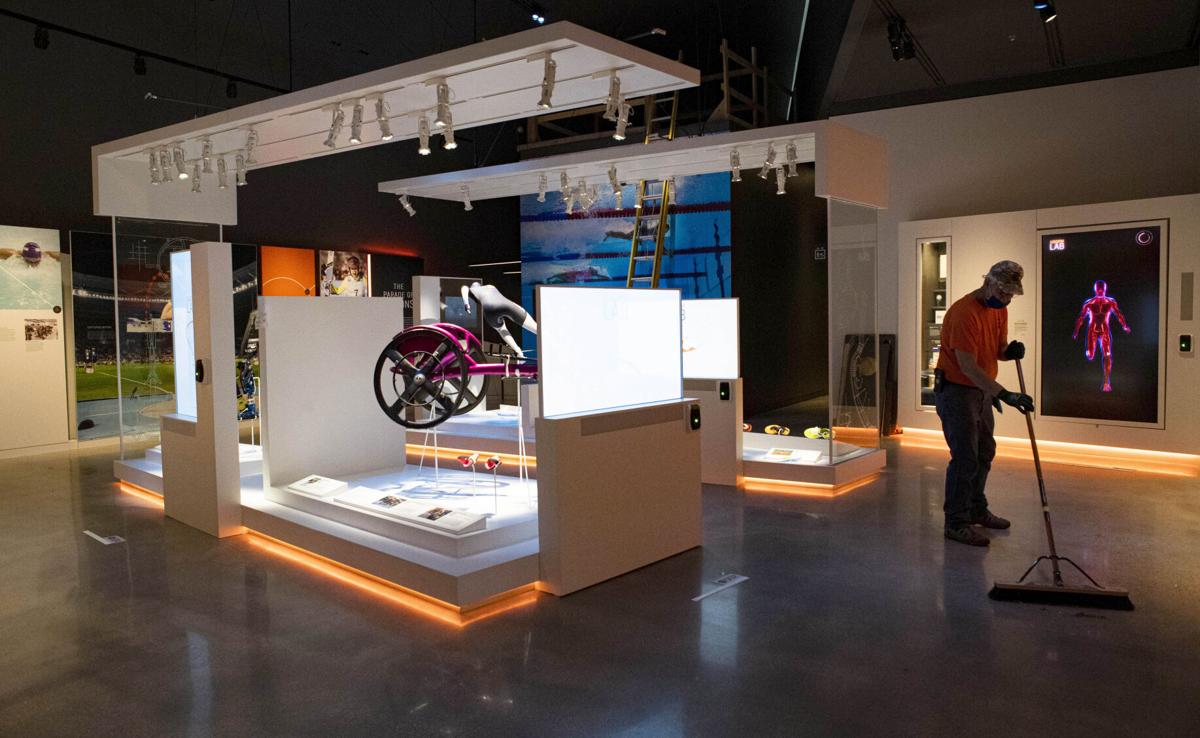 A worker sweeps the floor of The Lab exhibit July 17 at the new U.S. Olympic and Paralympic Museum in Colorado Springs.

Construction crews in late March worked on the exterior of the U.S. Olympic and Paralympic Museum on downtown Colorado Springs’ southwest side.

The U.S. Olympic and Paralympic Museum in Colorado Springs is slated to open next week.

A worker sweeps the floor of The Lab exhibit July 17 at the new U.S. Olympic and Paralympic Museum in Colorado Springs.

The Olympics, more than perhaps anything else, mark an entry point into a broader world of sports for those who consume them.

For my sister, it meant Mary Lou Retton vaulting to Perfect 10. Posters on the wall followed and much of her childhood was dedicated to gymnastics as a result.

My introduction came in 1988 with Ben Johnson being stripped of gold and Greg Louganis banging his head, and, well, I appreciate the lasting lessons that sports can be equally spectacular and complicated.

For generations, the spectacle has meant Jesse Owens or Peggy Fleming or fists raised in Mexico City or the Miracle on Ice or Mark Spitz or Carl Lewis, all the way through to Michael Phelps, Simone Biles and Lindsey Vonn.

Many of the greats rose from individual sports, providing different meanings for the individuals who clung to their stories.

If there’s an overarching theme to the U.S. Olympic and Paralympic Museum, which opened July 30 as the cornerstone to a revitalized southeastern downtown Colorado Springs, it’s producing an individualized experience.

Unlike Halls of Fame in Canton and Cooperstown and Springfield, which stand as monuments to a single sport and those who have thrived within its boundaries, the Olympic and Paralympic Hall of Fame is tasked with celebrating the best from sports ranging from equestrian to curling, competed on snow and sand and all surfaces in between. Such an undertaking can’t be squeezed between four conventional walls, so the museum is constructed in a spiral shape that deposits viewers at the top and allows them to corkscrew their way through 13 galleries to the bottom. There are solid artifacts to visit, but most of what visitors will encounter are interactive screens that will tailor the experience to their interests by telling the stories behind the names and moments that have defined America’s role in the Olympic movement.

To make this happen, visitors will give information such as hometown and sports interests upon entering, and the “credential” they wear will inform the displays how to tailor the experience to what they want to see.

Fittingly, this museum is curated not by a figure from sports, but by a past president of Smithsonian Enterprises and National Geographic.

“The museum isn’t about the what and the where, but it’s really about the how and the why,” CEO Christopher Liedel told The Gazette in May. “It’s taking that story from what you may be able to find on your own to really giving you a more in-depth experience. We really tried to make that come alive in the content.”

Athletes such as 1984 gymnast Michelle Dusserre consulted on the project, providing input on projects such as the Hall of Nations — a simulation of walking into the stadium during opening ceremonies — in an effort to provide as much authenticity as possible.

This project, in multiple variations, has been a hope for the city since Colorado Springs staked its claim as headquarters for the U.S. Olympic Committee in the late 1970s. The city is home to 23 Olympic National Governing Bodies, the Olympic Training Center that serves more than 10,000 athletes each year and around 2,000 people are employed here in connection to the Olympic movement.

The city raised nearly $8 million in the late 1980s for an Olympic Hall of Fame and museum before canceling the project before construction began because of escalating costs. In 1995, a small-scale U.S. Olympic Hall of Fame was added as part of a $23.8 million expansion of the Olympic Training Center.

In 2013, Colorado Springs was awarded $120.5 million over 30 years through the Regional Tourism Act, funded through state income tax revenue, as part of the City for Champions. Nor’wood Development Group provided a 1.7-acre land grant and ground was broken at Sierra Madre Street and Vermijo Avenue in 2017.

The city — given permission to use Olympic City USA as its official nickname in 2015 — estimates attendance at the museum will be around 350,000 per year, with forecasts on the number of out-of-state visitors ranging from 105,000 to 262,000.

If all goes to plan, that’s a lot of individual experiences to be taken from Colorado Springs’ newest tourist destination.

The U.S. Olympic and Paralympic Museum is located at 200 S. Sierra Madre St. Access from the north or south on Interstate 25 is gained by taking Exit 141 (West Cimarron Street). Head east on Cimarron and turn left on South Sierra Madre. The museum is on the left, with several parking lots and garages located within walking distance. Bike racks are located in front of the stadium and designated ride share and bus pickup/drop off locations are located on South Sierra Madre adjacent to the museum.

The museum is open every day except Thanksgiving Day and Christmas Day. Sunday through Friday hours are 10 a.m. to 5 p.m. and extended Saturday hours run from 9 a.m. to 6 p.m. Admission is $24.95 for adults, $14.95 for children ages 3-12, seniors 65 and older and military (active duty or retired) and first responders with ID are $19.95. Children 2 and under are free.

To help with flow through the museum and its interactive exhibits, admissions will be operated under a timed schedule and guests can reserve a time when purchasing tickets. Times can be reserved and purchased 90 days in advance.

Individual memberships are available at $99, providing year-round admission, discounts on guest admissions and at the museum café and shop and access to exclusive members-only hours. Memberships for two adults are $149, family (two adults, up to three children under 18 and two guest passes per year) are $175 and the family plus membership (two adults, up to five children under 18 and one guest pass each visit) is $249.

The 60,000-square-foot museum is home to the world’s most extensive collection of Olympic medals and torches, thanks in large part to a donation from private donor Gordy Crawford. There are torches from each Games since they were introduced in 1936, and only a handful of medals are missing — a gold from 1904 and medals from recent games in Sochi and Vancouver that athletes are as-yet unwilling to donate. The scoreboard from USA Hockey’s Miracle on Ice victory over the U.S.S.R. is on display, as are various artifacts provided by athletes and collectors.

Visitors will be allowed to test their athletic skills in six sports, including a 30-yard dash against actual Olympians. Much of the museum’s information is displayed on interactive screens that is customizable based on preferences provided by guests. Visitors will be ushered through a Parade of Nations that will simulate walking into the stadium during opening ceremonies.

The Flame Café is located on the north side of the museum, offering views of Pikes Peak. The restaurant will hold the same hours as the museum, but is open to patrons with or without a museum ticket. Food-based events are planned and the frequently changing menu may see tweaks during Olympic Games to highlight fare of the host city.

Cameras are permitted and pictures and videos can be taken throughout the museum (the museum wants patrons to use #USOPMuseum). Only in the theater are they not allowed. Wheelchairs, strollers and service animals are allowed, and the museum is fully compliant with the Americans With Disabilities Act.

Backpacks and bags (except diaper bags), weapons and smoking are prohibited. Food and beverage is not allowed in exhibit areas.