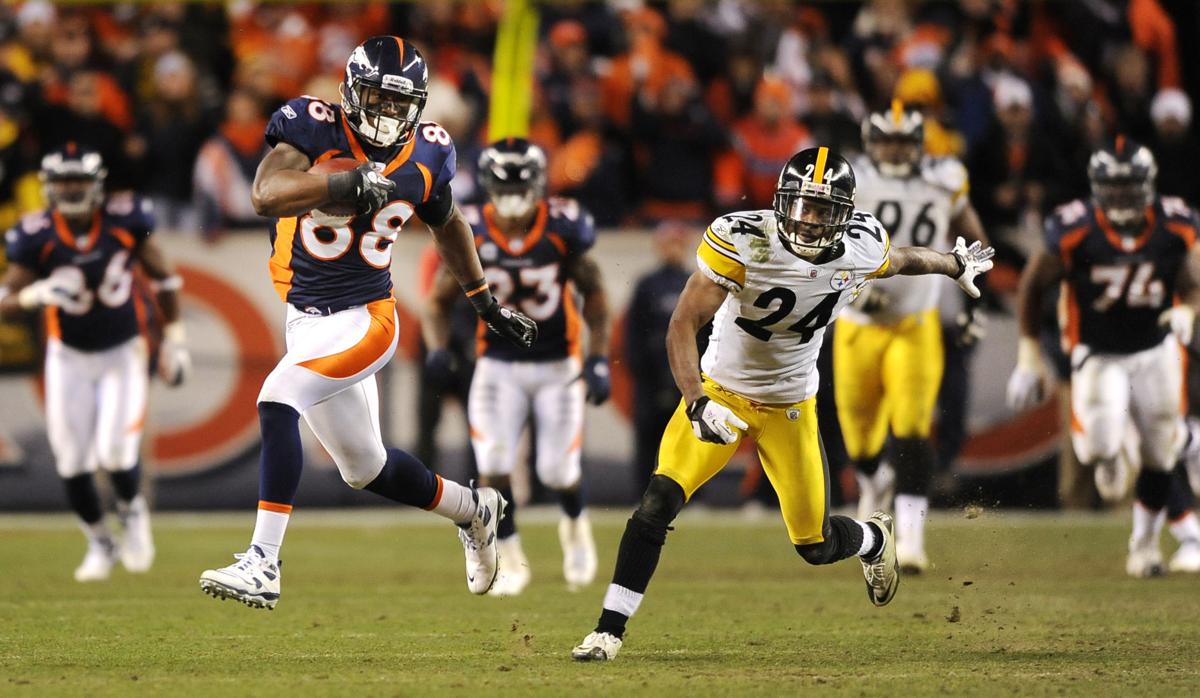 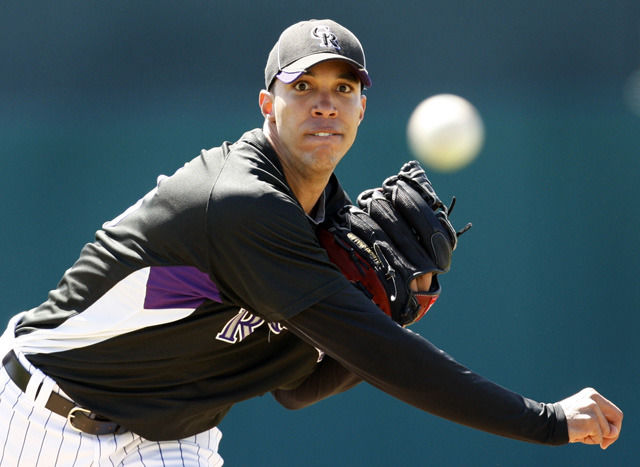 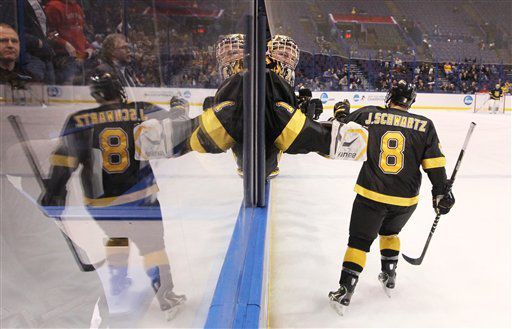 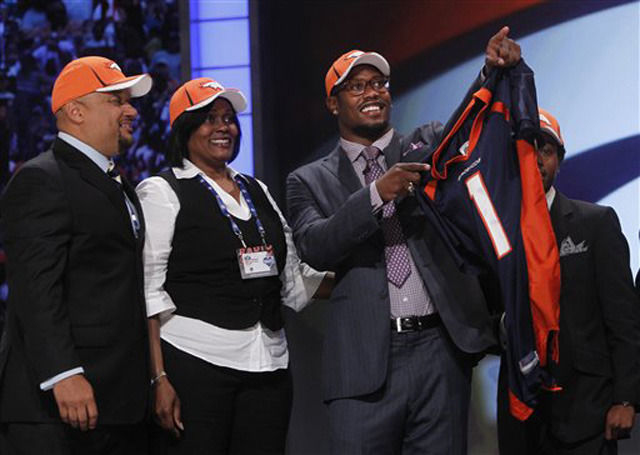 Texas A&M linebacker Von Miller, right, gestures alongside family after he was selected as the second overall pick by the Denver Broncos in the first round of the NFL football draft at Radio City Music Hall Thursday, April 28, 2011, in New York. (AP Photo/Jason DeCrow) 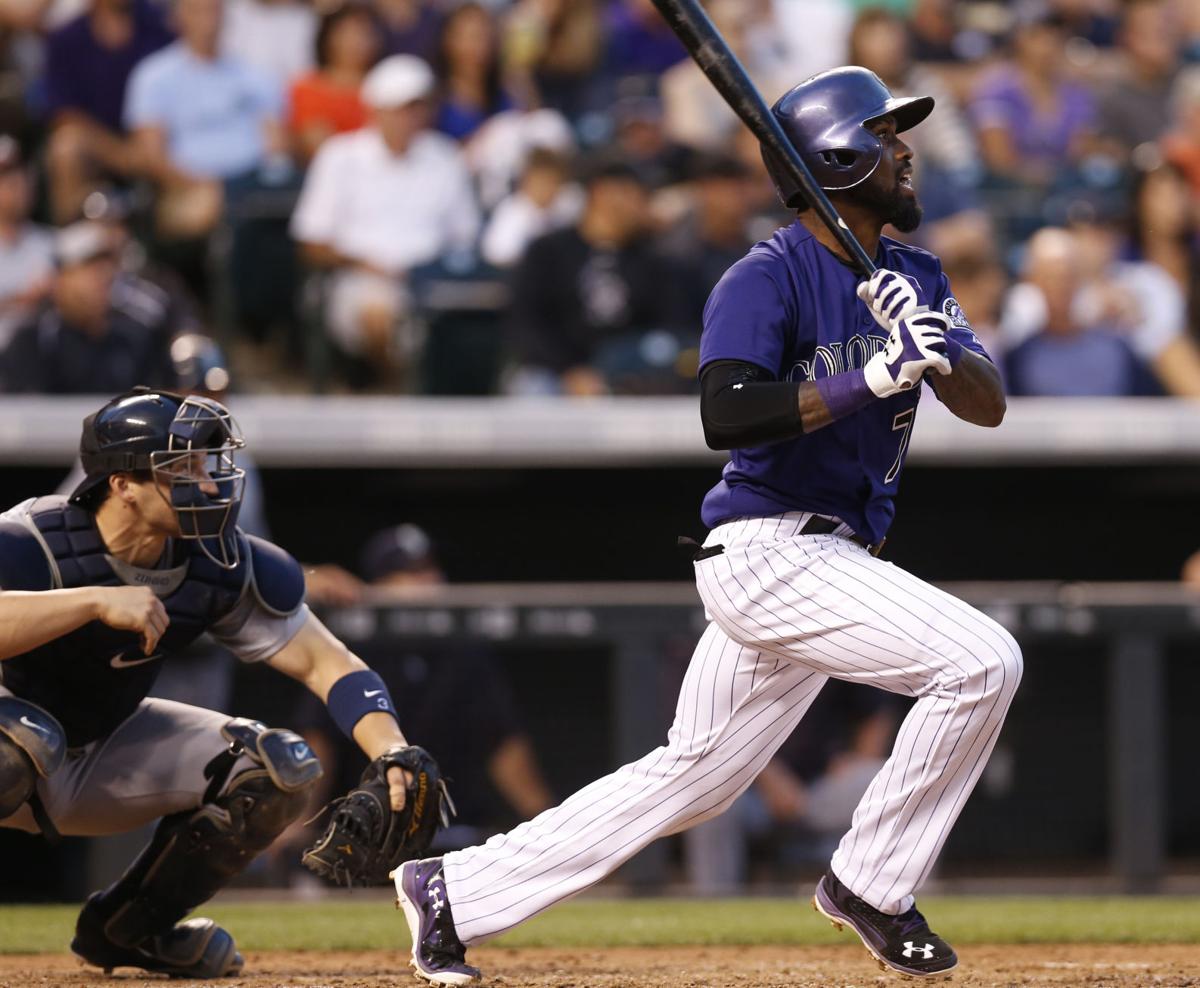 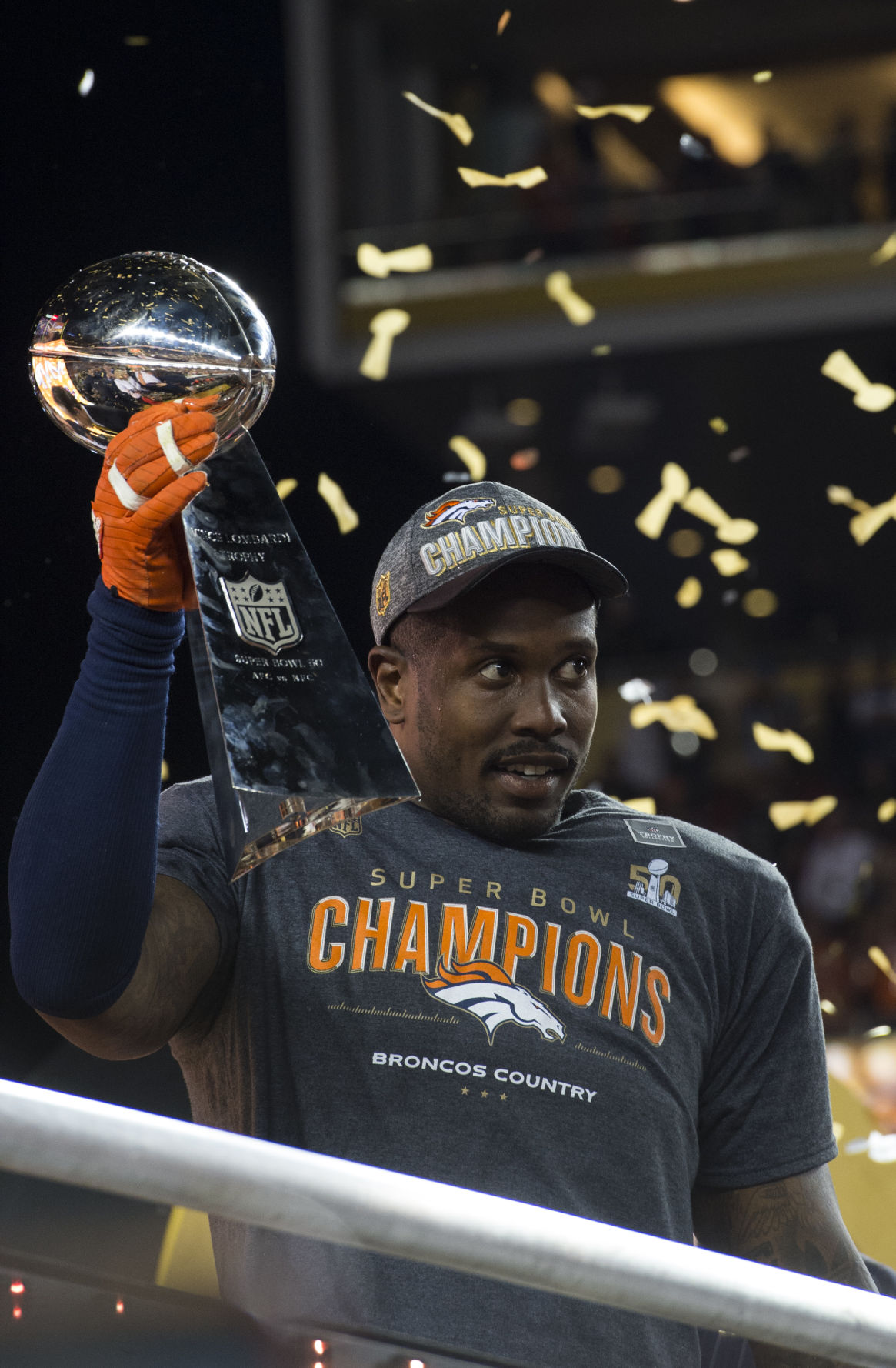 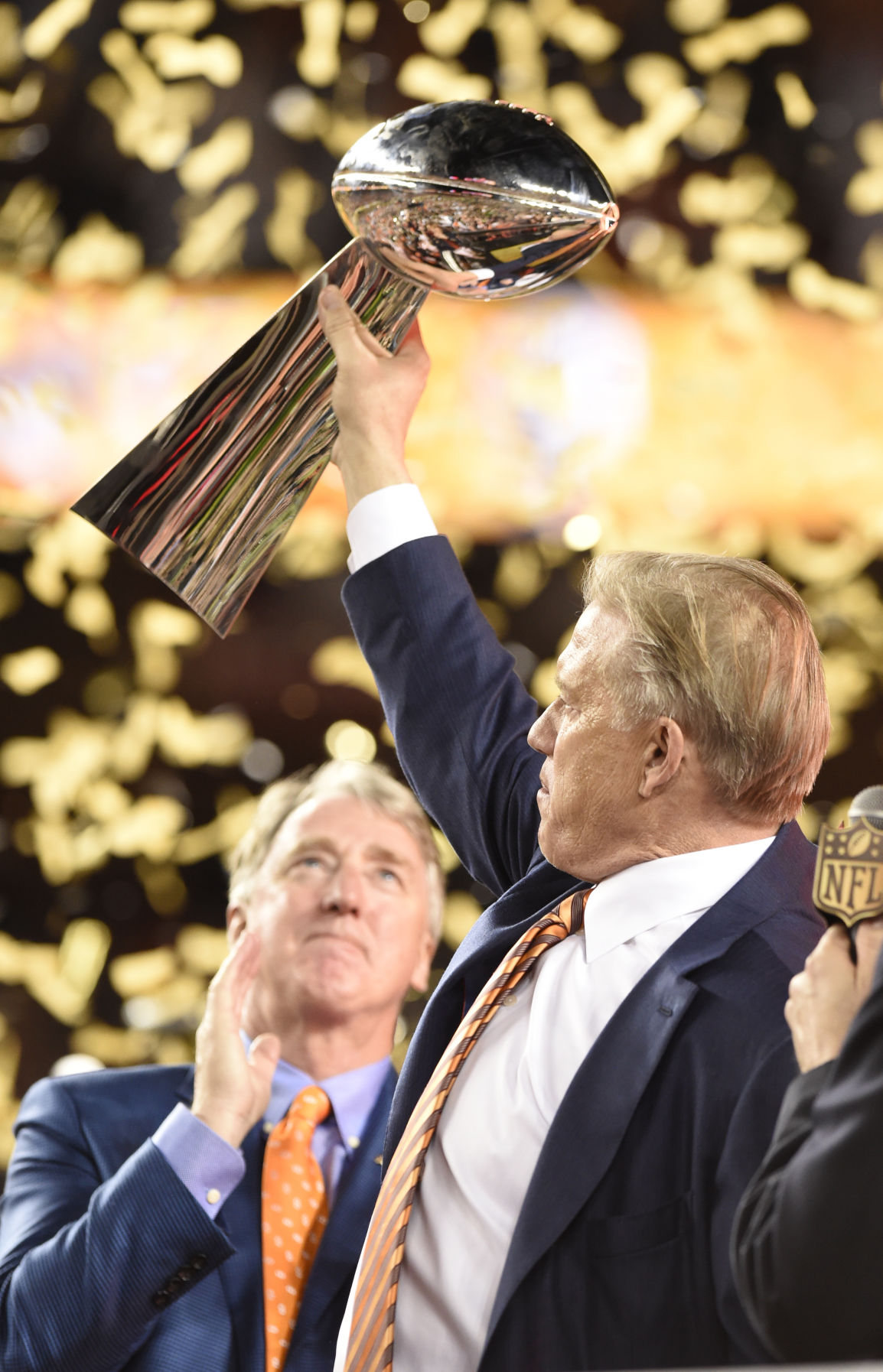 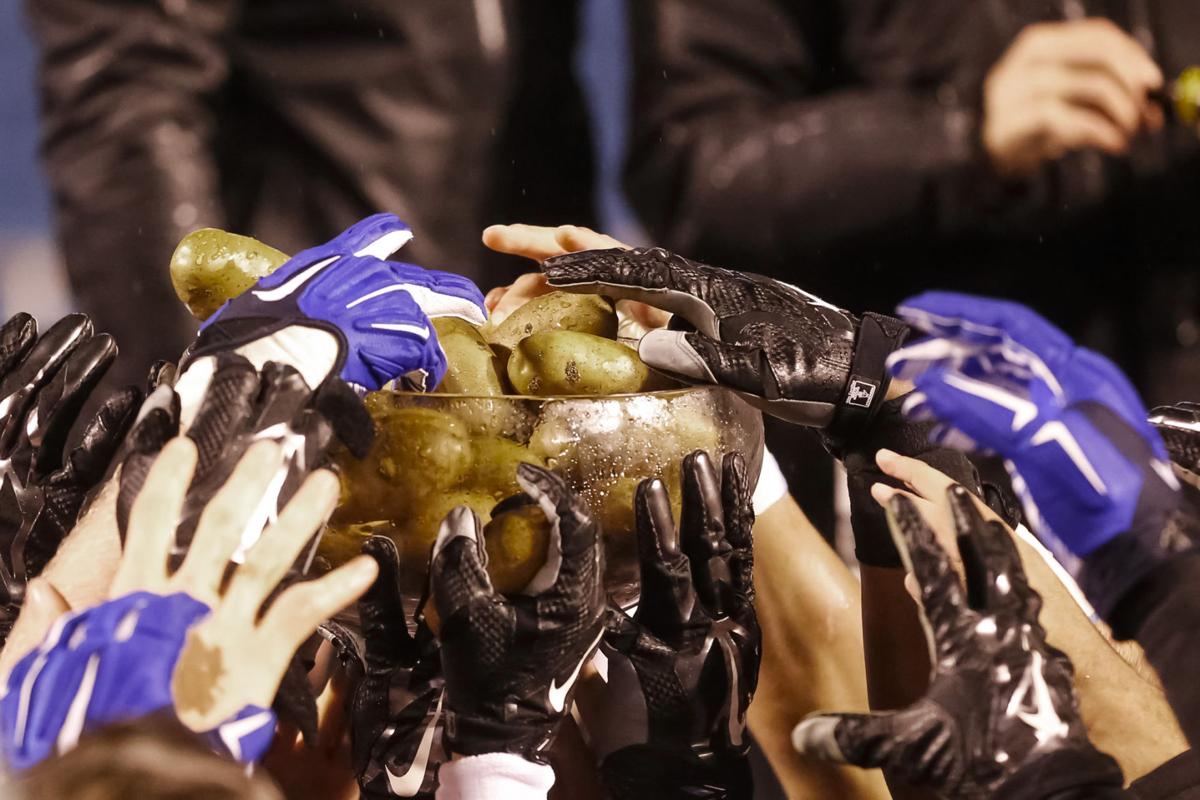 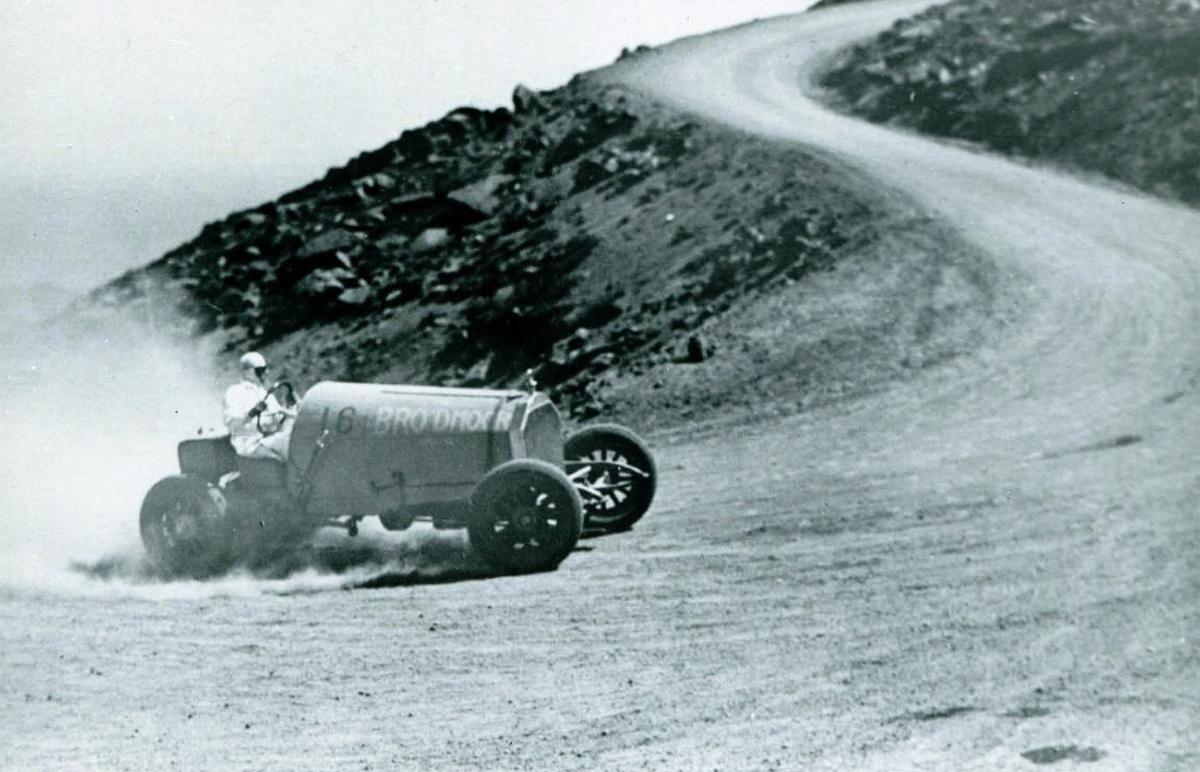 Angelo Cimino drives the Broadmoor Special No.16 up Pikes Peak in 1927. Photo courtesy of the Penrose Heritage Museum 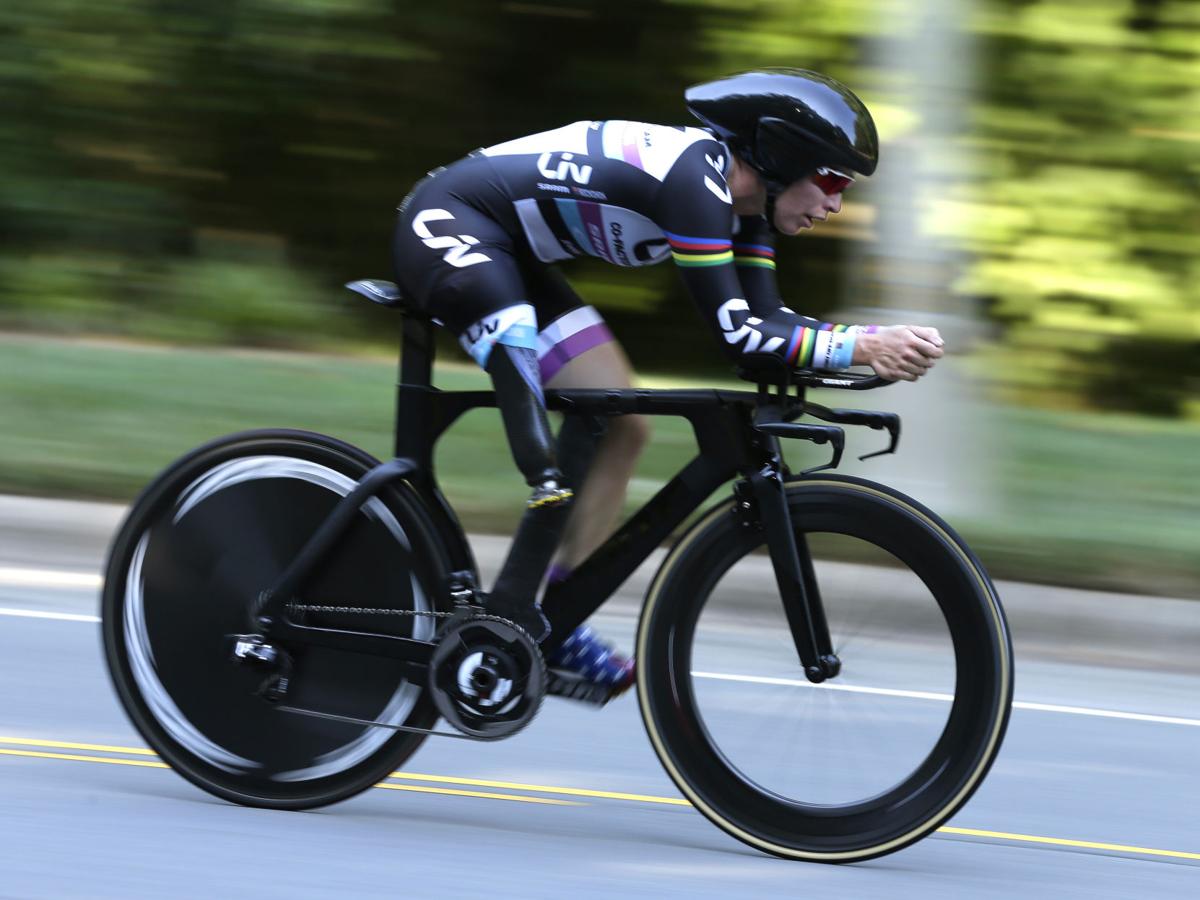 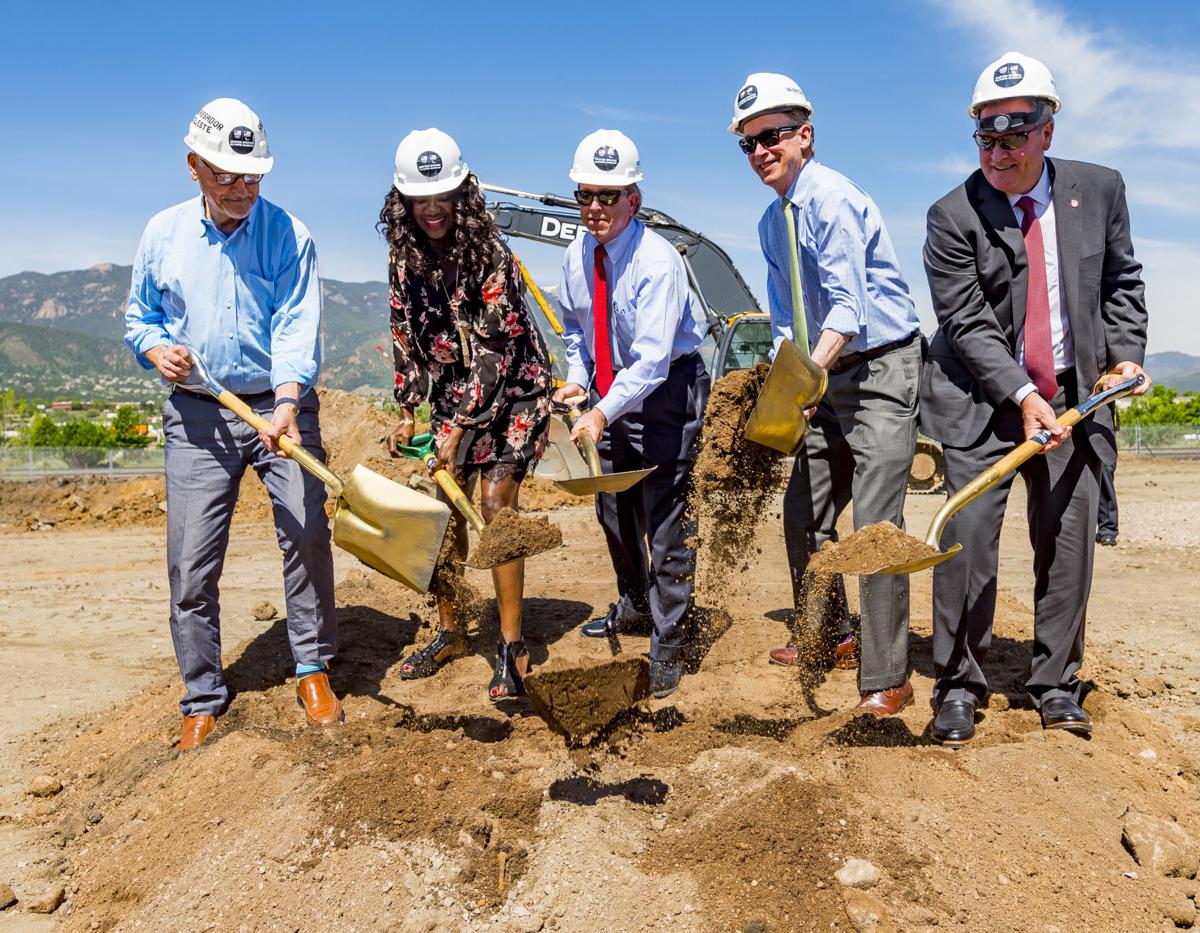 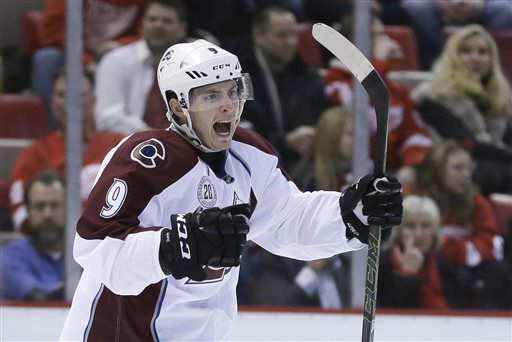 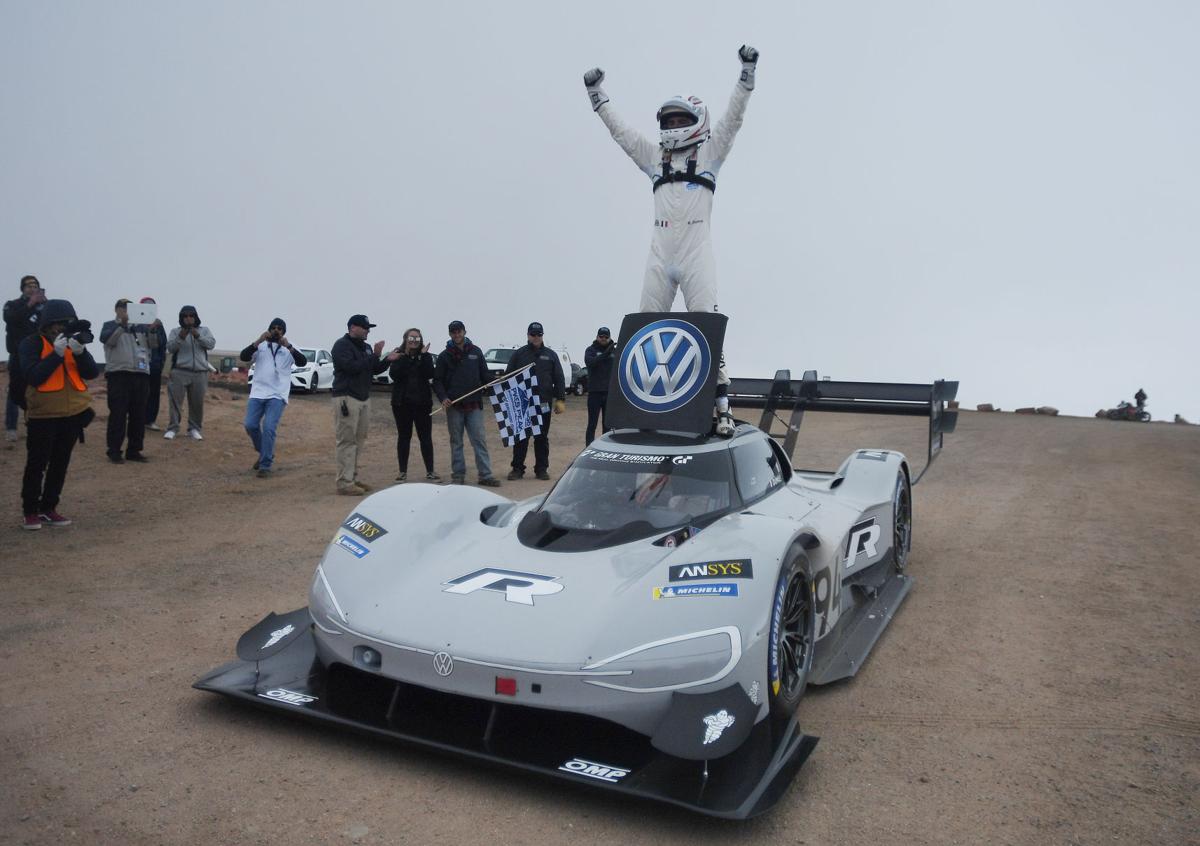 France's Romain Dumas becomes the first to break the 8-minute mark in the Pikes Peak Hill Climb with a record of 7:57.148. He celebrates atop his car after getting to the summit. The 96th running of the Broadmoor Pikes Peak International Hill Climb was held on Sunday, June 25, 2018. (Photo by Jerilee Bennett, The Gazette) 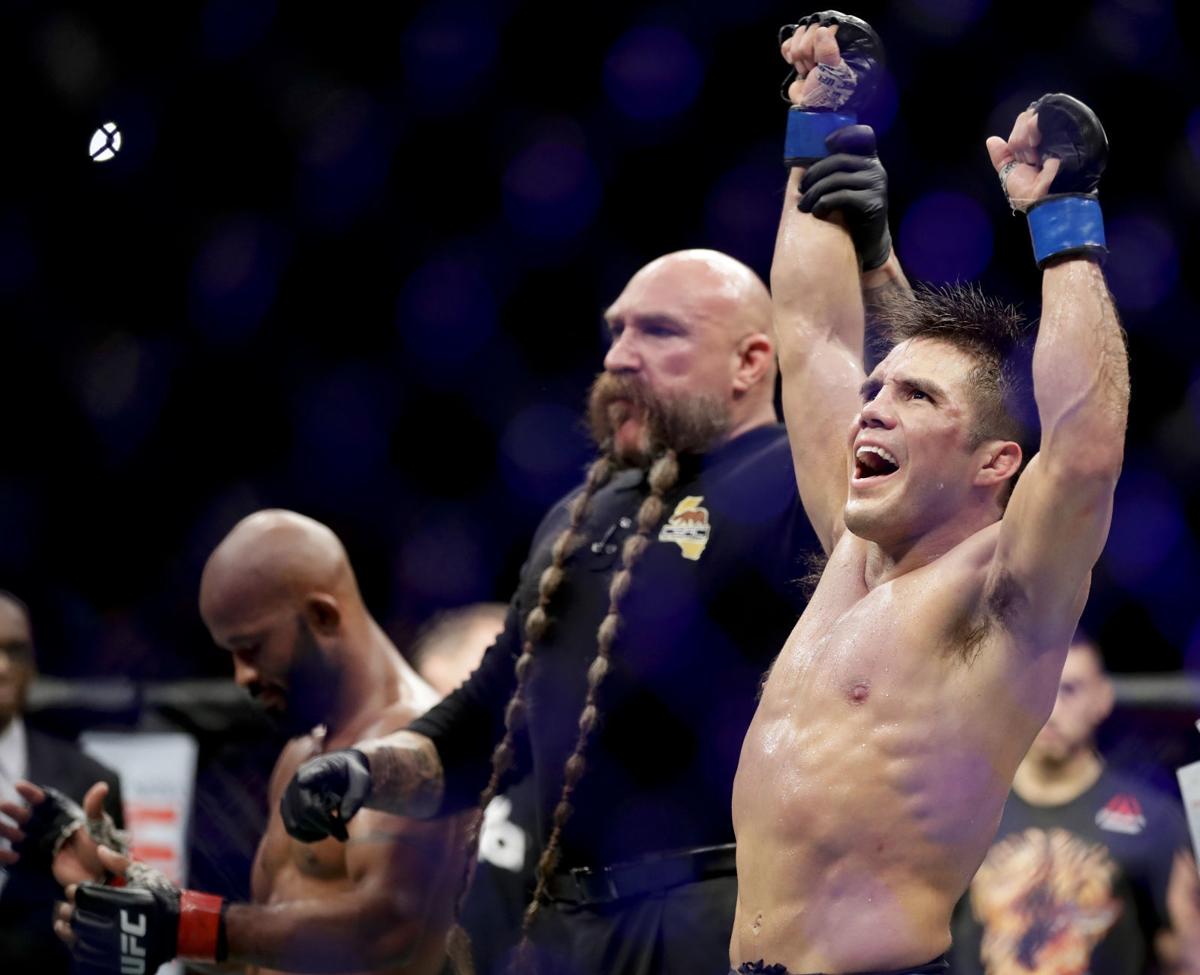 Coronado High School graduate Henry Cejudo celebrates his win against Demetrious Johnson during their UFC flyweight title bout at UFC 227 on Aug. 4, 2018, at the Staples Center in Los Angeles. It completed a goal the 2008 Olympic gold-medal wrestler set when he was 17. 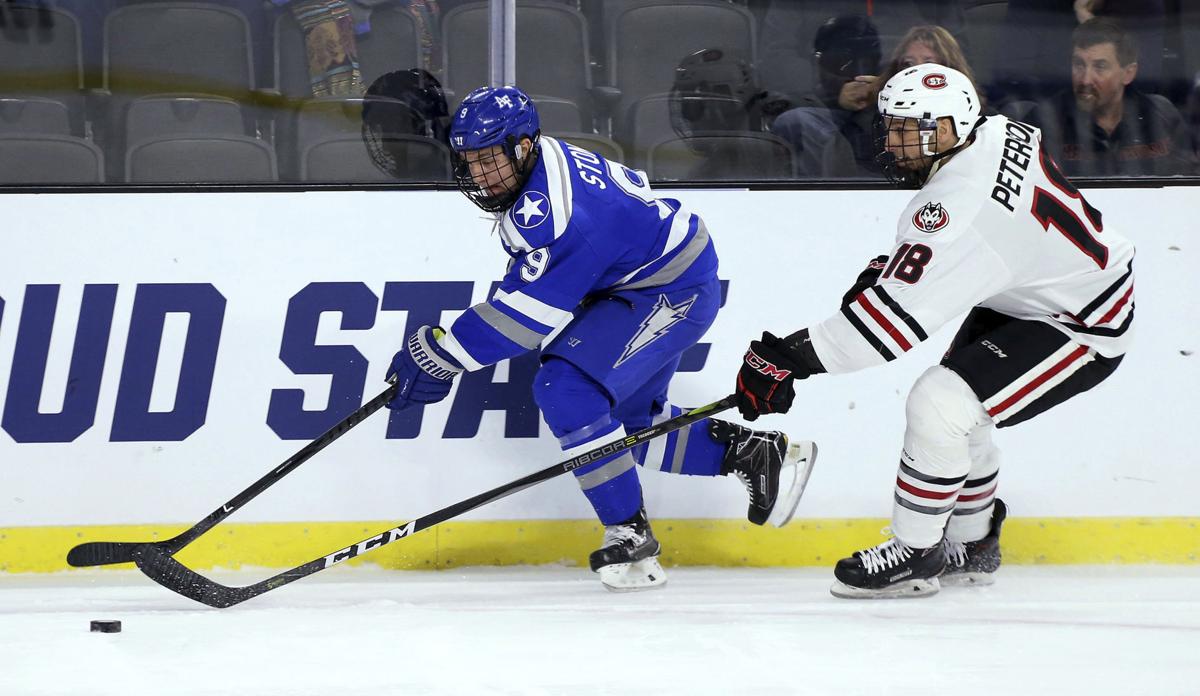 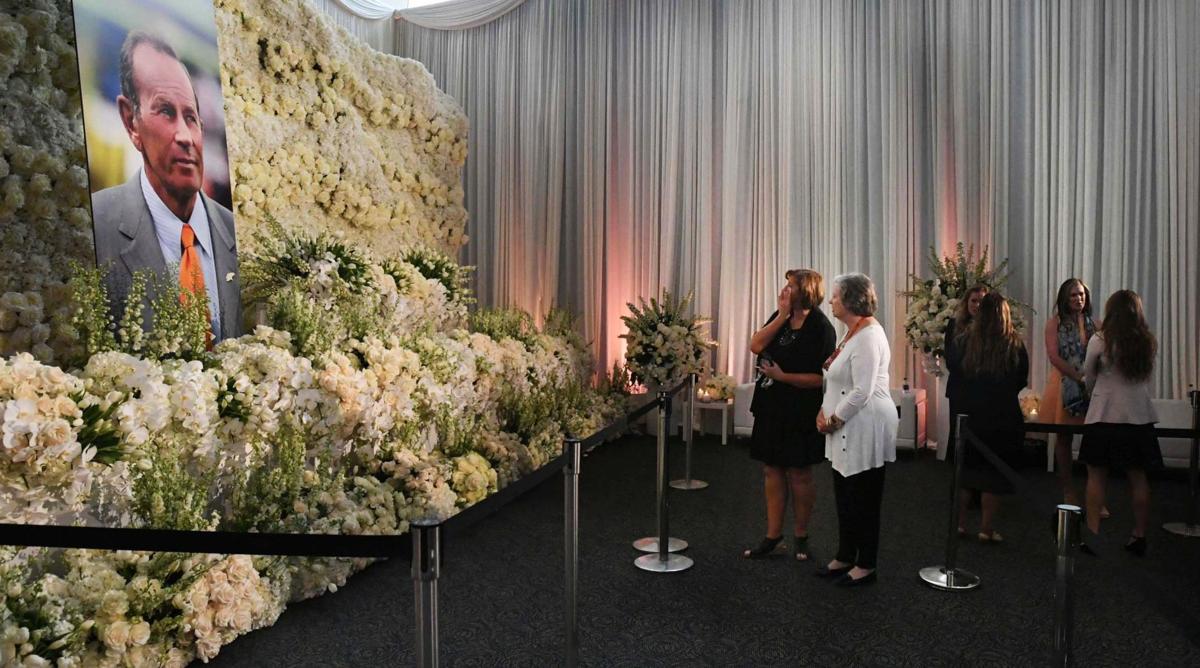 The Broncos faithful turned out by the thousands to say goodbye to Broncos owner Pat Bowlen, who died of Alzheimer’s June 13. A five-hour open house was held Tuesday at Broncos Stadium at Mile High in Denver. From left, Bowlen’s daughters Brittany and Beth Bowlen face the camera as they greet fans. 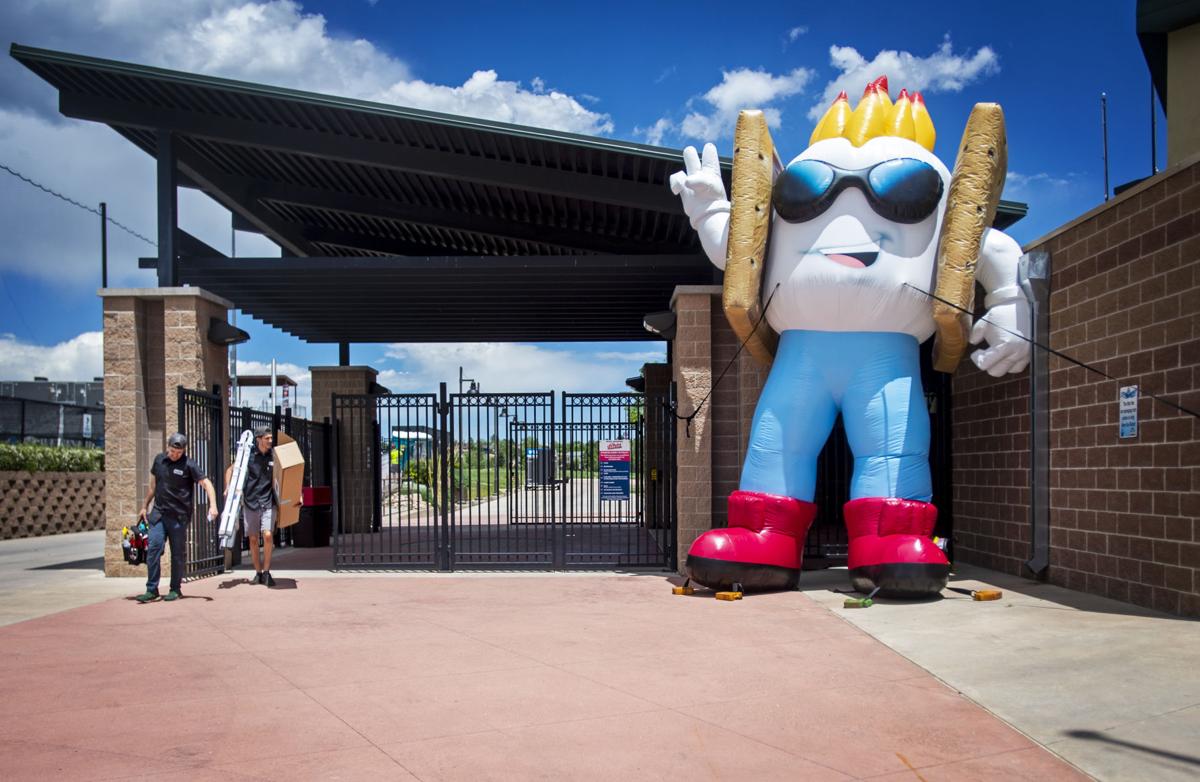 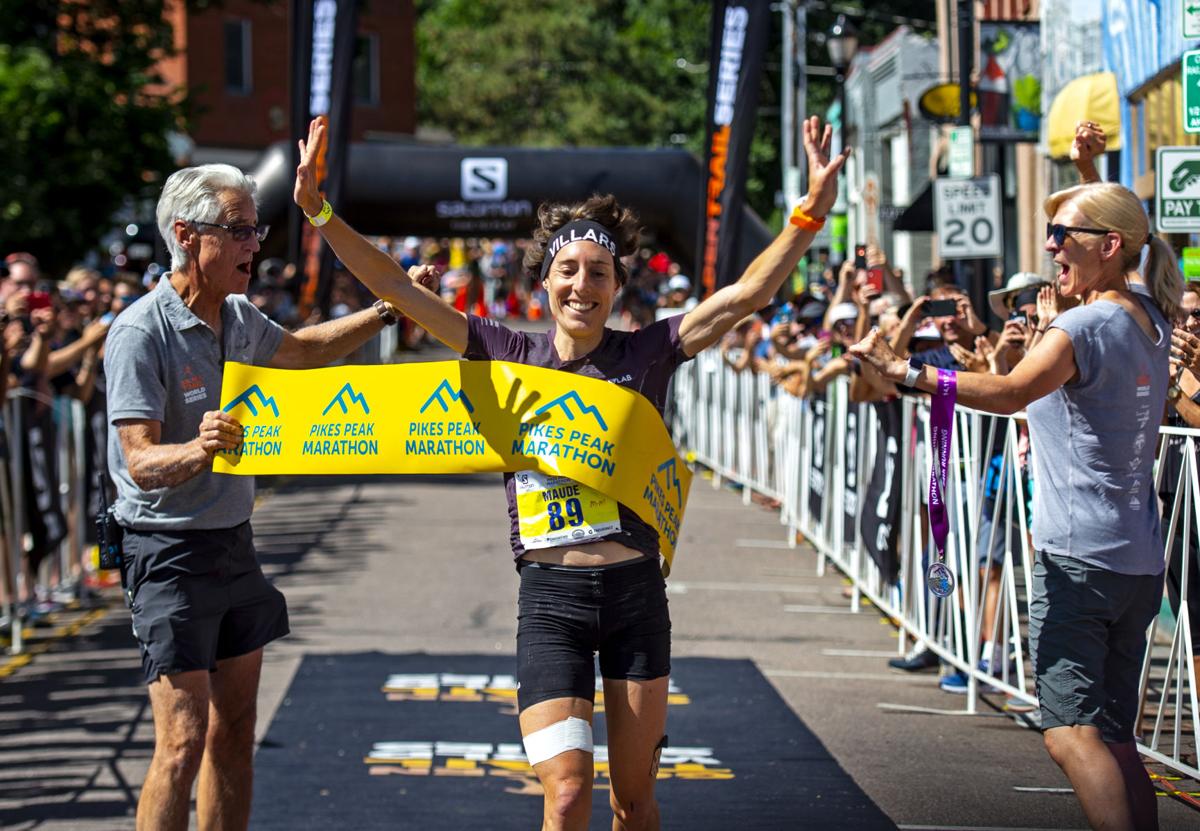 Relive some of the best sports moments from the past decade around the Colorado-Springs area.

Cheyenne Mountain high school student and figure skater Rachael Flatt wins gold at the 2010 U.S. Championships and represents her country at the 2010 Winter Olympics in Vancouver. She places 7th with 182.49 points

Ubaldo Jimenez pitches the first no-hitter in the Colorado Rockies' 18-year history, dominating the Atlanta Braves in a 4-0 victory.

The Broncos take future star linebacker Von Miller out of Texas A&M with the second pick of the 2011 NFL Draft.

The Denver Nuggets trade Carmelo Anthony to the Knicks along with Chauncey Billups in exchange for Wilson Chandler, Raymond Felton, Danilo Gallinari, Timofey Mozgov, a 2014 first-round pick and the swap rights in 2016. The deal was expected after extension talks between Anthony and the Nuggets broke down.

Tim Tebow connects with Demaryius Thomas on an 80-yard touchdown pass on the first play of overtime and the Broncos stun the Steelers 29-23 in the AFC wild-card game.

Peyton Manning signing with the Broncos

The biggest free agent signing in NFL history — Peyton Manning — altered the landscape of the league and ultimately brought a pair of Super Bowl appearances and a third world championship to Colorado.

Now a Bronco, Manning says hello to his new team

Todd Fletcher’s 3-pointer with 2 seconds left helped Air Force basketball defeat No. 12 New Mexico 89-88 in the regular-season finale, making it the highest-ranked opponent the Falcons had ever beaten and making it three wins over ranked teams in a 13-month span.

The British royal, at the time 28 and third in line to the throne, visits Colorado for the Warrior Games, a Paralympics-style event for wounded service personnel.

Wasson High School, which had been open since 1959, shuts its doors due in part to dwindling numbers.

The Air Force Athletic Association Corporation moved to non-profit 501(c)3 status in what was much more than a clerical detail. This transition has brought the ability to directly fundraise, to pay coaches and administrators more competitively with non-government money and has allowed the academy to take transparency out of many of its athletics expenditures.

When the franchise’s most important moment since the Carmelo Anthony trade arrived, almost no one saw it: ESPN aired a Taco Bell commercial when the Nuggets took All-Star center Nikola Jokic with the 41st overall pick.

Air Force topped Western Michigan 38-24 in the Famous Idaho Potato Bowl in Boise, Idaho, completing a turnaround that saw the program go from 10 losses in 2013 to 10 wins the following year.

The Rockies announce what was, at the time, a monster trade, sending star shortstop Troy Tulowitzki and veteran reliever LaTroy Hawkins to Toronto in exchange for Jose Reyes and a trio of minor league pitchers.

The dueling images of Super Bowl 50 MVP Von Miller raising the Lombardi trophy and John Elway shouting, “This one’s for Pat!” on a stage in Santa Clara, Calif., will forever be etched in the memories of Broncos Country.

The University of Denver and Colorado College squared off in the “Battle on Blake” in front of 35,000 fans at Coors Field. The Pioneers won, 4-1.

A 2-1 win over World No. 3 Khetag Goziumov of Azerbaijan in the 97 kg freestyle wrestling division made Kyle Snyder, who trained in Colorado Springs and graduated from Coronado High School, the youngest Olympic gold medalist in U.S. wrestling history, part of an incredible year.

Jalen Robinette, Weston Steelhammer and others from Air Force’s touted football Class of 2017 saw their chances of being drafted undercut by a sudden reversal in policy from the Department of Defense as the draft began that again required service academy graduates to immediately serve two years on active duty.

The Elmore Sports Group announced it is responding to “pressure from within Major League Baseball” and moving the Triple-A Sky Sox to San Antonio for the 2019 season and replacing it in Colorado Springs with the short-season Rookie-level team from Helena, Mont., that will eventually become the Rocky Mountain Vibes.

Sky Sox season comes down to the final day: Either playoffs await, or Triple-A baseball exits the city

Joe Sakic’s patience set up the franchise for the next decade when the general manager traded star forward Matt Duchene to the Senators, a move that ultimately brought eight players to the rising Avalanche.

Derrick White made his NBA debut, coming off the bench for the San Antonio Spurs, who drafted him 29th overall that year, in a 107–99 win over the Minnesota Timberwolves. The lightly-recruited Colorado native played three seasons for UCCS.

David Toms made a critical par on the 71st hole to capture the 39th U.S. Senior Open Championship at The Broadmoor’s East Course.

Henry Cejudo, a Coronado graduate who had won Olympic gold in freestyle wrestling in 2008, upset Demetrious Johnson in a split decision to take the flyweight championship belt at UFC 227 in Los Angeles. Cejudo later added a bantamweight title, defeating Marlon Moraes for the vacant belt on June 8, 2019 in Chicago.

The Rockies’ lone postseason win of the 2010s came at the expense of the Wrigley Field bleacher bums when Colorado’s own, Kyle Freeland, shut down the Cubs in a National League Wild Card game.

Air Force Hockey upsets top-seeded St. Cloud State in the NCAA Tournament’s West Regional, advancing to the Elite Eight for the second year in a row.

After years of shifting rumors, it’s announced that Colorado College hockey and the Switchbacks will get new stadiums in the downtown area.

Switchbacks fire Steve Trittschuh, the club's only coach to that point. The team would later hire Alan Koch to manage the team as it transitions to downtown Colorado Springs.

When beloved owner Pat Bowlen passed away after a lengthy battle with Alzheimer’s disease, the state of Colorado mourned his passing and celebrated his vast accomplishments as a Hall of Fame contributor.

An infield single. A speedster caught stealing. An inside-the-park home run. A triple. At the end of the day, though, the Rocky Mountain Vibes drop their first game in Colorado Springs, 8-5. Their short stay has already been threatened.

After the death of four-time motorcycle champion Carlin Dunne during the 2019 race, the The Pikes Peak International Hillclimb announces “there will be no motorcycle program offered in 2020.”

For the fourth year in a row and the sixth time in seven years, Lewis-Palmer becomes the 4A champion of volleyball, in spite of lowered expectations.

The Switchbacks break ground on their new downtown stadium.

VANCOUVER – In her first Olympic test, with the world watching, with the weight of a country on her shoulders, Rachael Flatt nearly passed with flying colors. The Broadmoor Skating Club member finished fifth Tuesday in the short program at the Vancouver Games, performing an upbeat and energetic routine that vaults her not far off the podium, set back only by a wobbly landing on a triple jump. She’s 13.86 points behind South Korean Kim Yu-na, who set a world record with a score of 78.50. Mao Asada of Japan is second, 4.72 points off the pace, and Canadian Joannie Rochette is third, 6.72 points ahead of Flatt, just two days after Rochette’s mother died of a massive heart attack. American Mirai Nagasu is sixth.

Air Force had only had a few days to prepare for AIC with their first practice coming Sunday, according to coach Frank Serratore. It could be a rocky return after a month away.