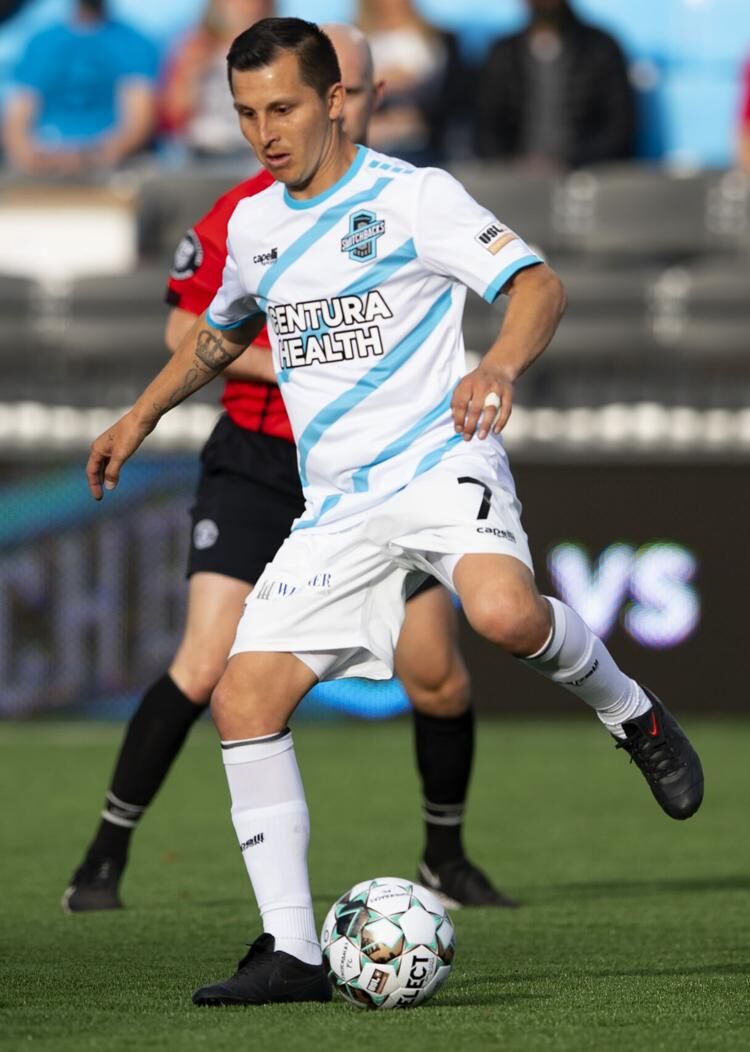 At 33, Switchbacks midfielder Jose Torres is the elder statesman of the team. He had a long career as an international player for the United States Men’s National Team. 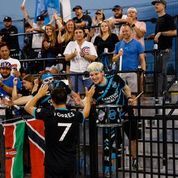 Switchbacks midfielder Jose Torres is congratulated by fans after a home game earlier this season.

At 33, Switchbacks midfielder Jose Torres is the elder statesman of the team. He had a long career as an international player for the United States Men’s National Team.

Switchbacks midfielder Jose Torres is congratulated by fans after a home game earlier this season.

A member of the United States’ Men’s World Cup Team at the age of 22, Torres got the call from coach Bob Bradley to start the club’s first match against Slovenia. The tournament was played in South Africa.

“That was crazy just knowing that I was going to start at a World Cup,” Torres said. “I didn’t sleep the night before. I was so nervous. It’s a moment that every soccer player plays for and I thank God that I got a chance to play it. To this day I can’t believe I got to start a World Cup.”

Torres, now 33, is the elder statesman for the Colorado Springs Switchbacks FC. A center midfielder and vice-captain, he was born in Longview, Texas, and began playing professionally in Mexico at 18 in 2006. He spent his entire pro career there until signing with the Switchbacks last November.

He has played in nearly 300 professional games.

In the soccer world, caps are considered a major deal. Torres has 26 of them. That is an impressive amount for anyone.

He earned his first one in on Oct. 11, 2008, when he made his National Team debut as a 68th minute substitute during a World Cup Qualifier against Cuba at RFK Stadium in Washington, D.C.

He picked up his last one on July 24, 2013, when he started a Gold Cup semifinal against Honduras.

Along the way he played with the likes of Landon Donovan, Clint Dempsey, DeMarcus Beasley and Tim Howard.

“It was a great experience and I had a great run with the National Team,” Torres said. “It was something I always worked hard for.”

Torres, who is married with two children ages five and three, lockers next to fellow Switchbacks midfielder Zach Zandi.

“He’s an absolute wealth of knowledge,” the 25-year-old Zandi said. “I get to pick his brain a lot. I mean, he’s played in the World Cup. He’s played in some big-time games that I have not come close to, so it’s really on me to try and get any information I can out of him. And to have that availability here in the USL (Championship) is pretty incredible for a young player like myself to learn and develop.”

Switchbacks defender and captain Jimmy Ockford, 29, said having Torres on the team is invaluable.

“It’s great having his experience in the field and in the locker room,” Ockford said. “He has some great advice, especially for the younger guys who are starting their careers. That’s good to help the young guys out with the transition because he’s a guy that’s been through it.”

“He still has all his technical ability, which is a huge key to the game if you want to be the team that is dominant in possession,” Burke said. “He also adds the tactical awareness that is really important to our style of play.

“On the flip side of it, his experience is massive. Being able to put his arm around younger players and help them with those technical moments or tactical moments adds value in a number of different ways.”

Major League Soccer is the one level Torres has never played. He would like to finish out his career with an MLS team.

“I am enjoying my moments with this team because I never know when my career is going to end," Torres said. “I’ve battled through injuries the last couple of years, but I believe I still more soccer in me.

“I probably wouldn’t want my career to end right here, but if it did I think I would be happy because I had a helluva career. I won a lot of championships. I got to play with the best players in the United States. But my mentality is that I want to keep going. I think I have 2-3 more years in me. And playing with these guys they keep me going playing at their pace.”

Torres and the Switchbacks will be in Leesburg, Va., Saturday night for a non-conference match against Loudoun United FC.

Torres will celebrate his 34th birthday on Oct. 29 when the Switchbacks play their regular-season finale at San Antonio FC.

For the better part of six weeks, Colorado Springs Switchbacks FC coach Brendan Burke has stated that the club would sign a high impact player.