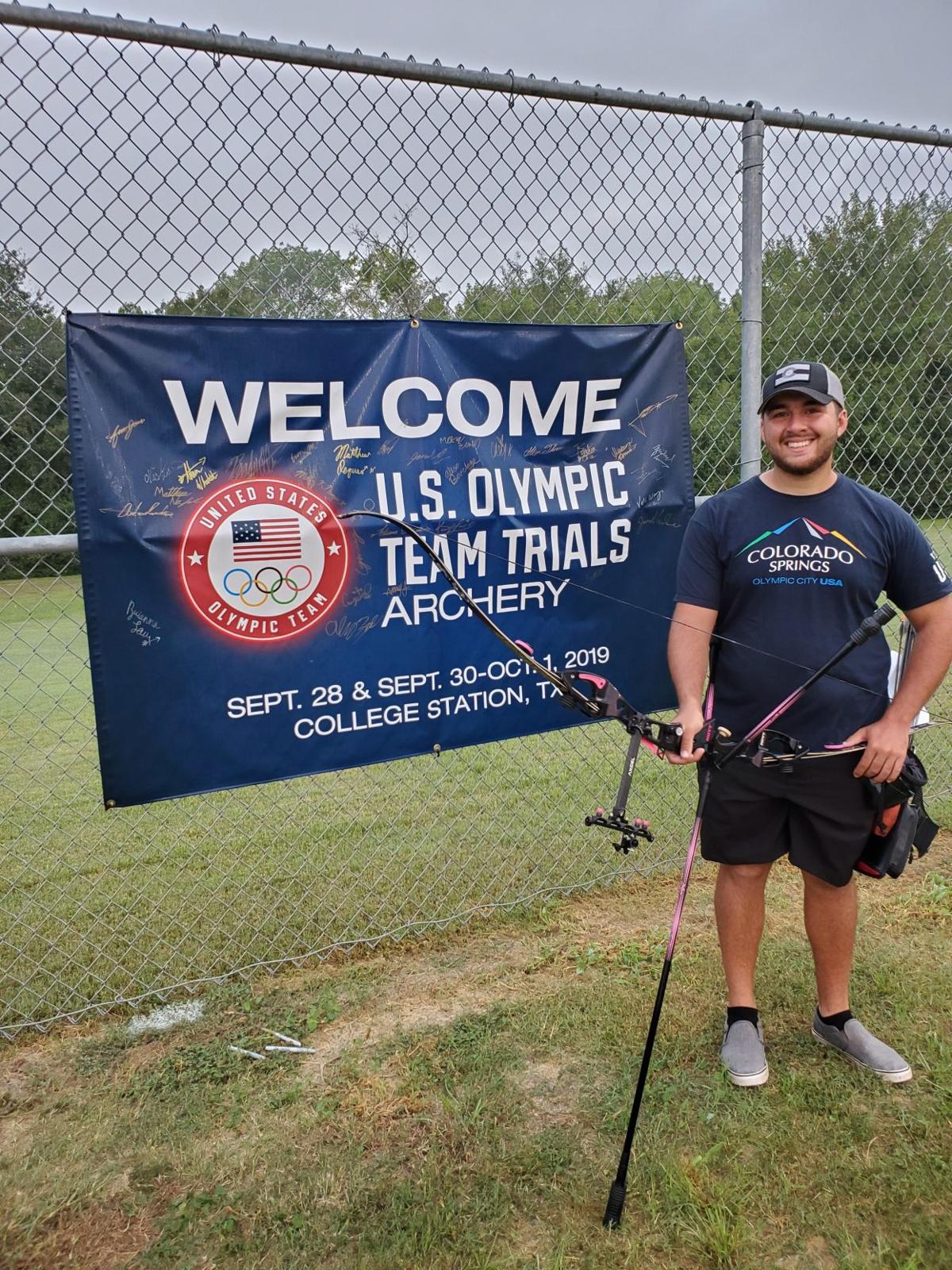 Matthew Nofel, 20, poses with a banner at the U.S. Olympic Team Trials in archery in College Station, Texas. 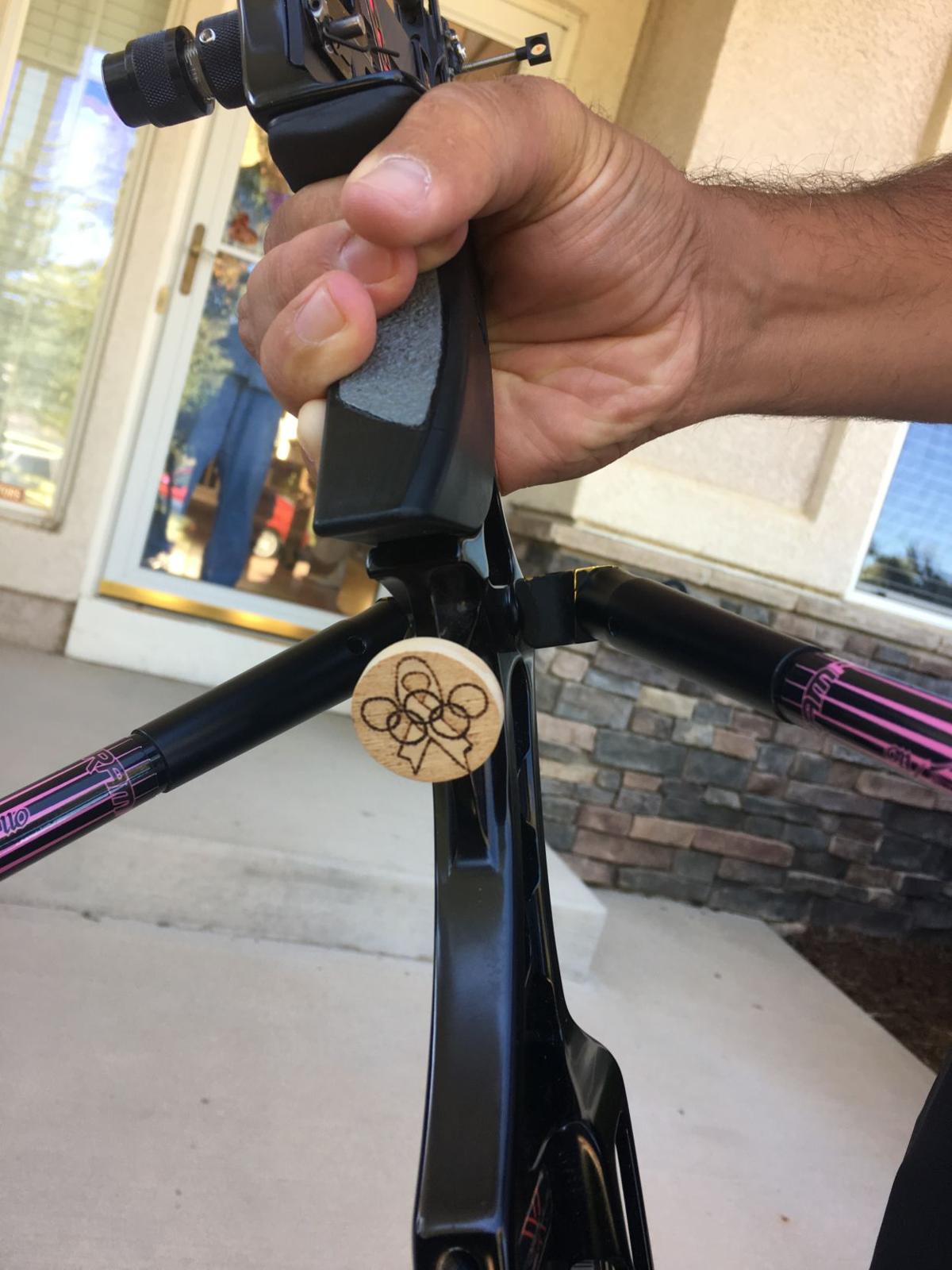 Matthew Nofel shows his artistic handiwork, featuring the Olympic rings, on his bow at his family's home in Colorado Springs on Oct. 3. 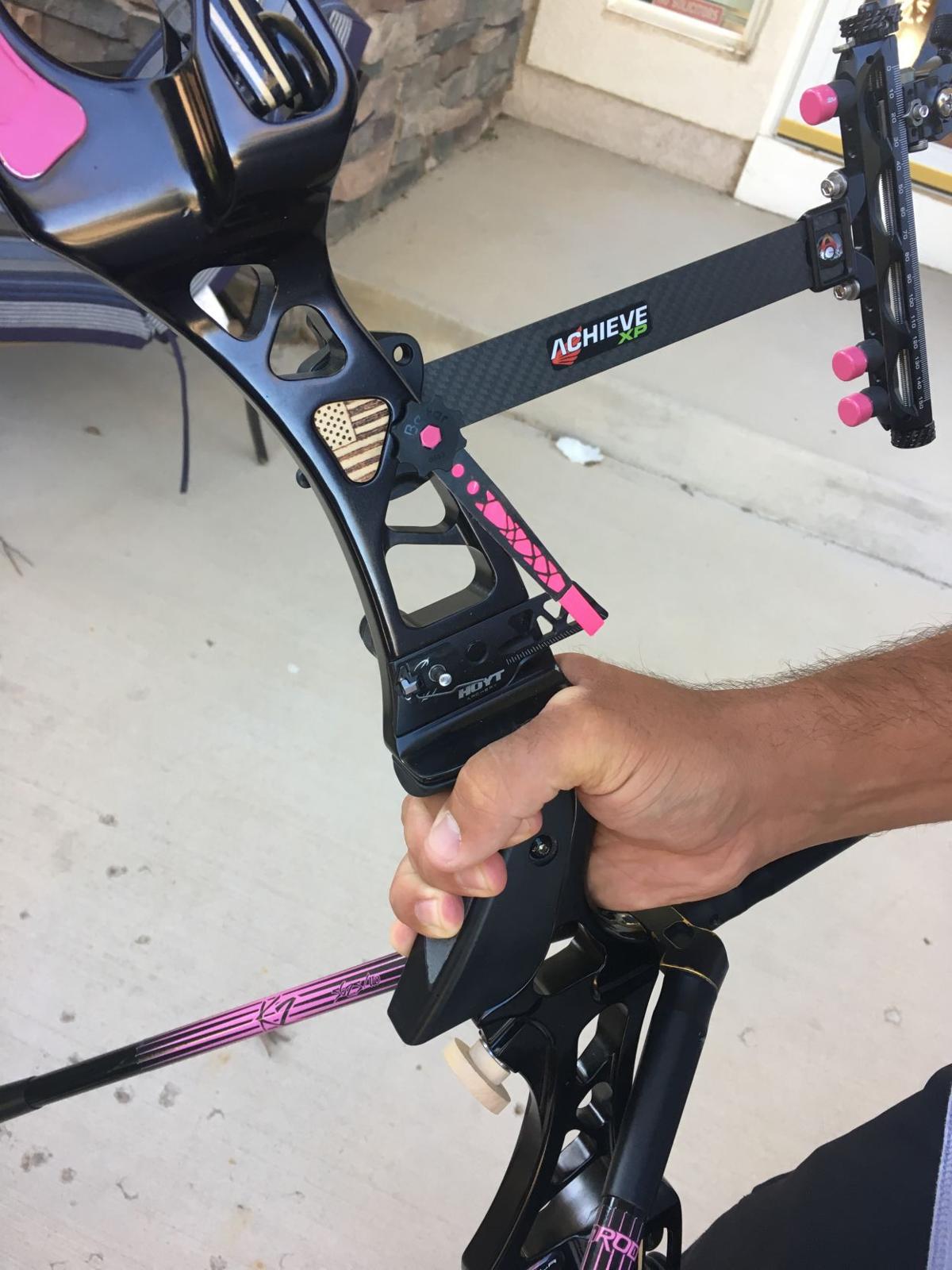 Matthew Nofel shows his artistic handiwork on his bow at his family's home in Colorado Springs on Oct. 3.

Matthew Nofel, 20, poses with a banner at the U.S. Olympic Team Trials in archery in College Station, Texas.

Matthew Nofel shows his artistic handiwork, featuring the Olympic rings, on his bow at his family's home in Colorado Springs on Oct. 3.

Matthew Nofel shows his artistic handiwork on his bow at his family's home in Colorado Springs on Oct. 3.

When Matthew Nofel comes home, he stands at the curb of his family’s north Colorado Springs driveway with his bow — pink, for breast cancer awareness and to honor his grandmother Marilyn, and embellished with carvings he did himself. He fires at targets in the garage. His sight was off once, and his arrow pierced the garage’s interior wall.

If he makes the Tokyo Olympic team, his parents Kim and Steve are going to have him sign the hole.

“I kind of dragged them into archery, but they let me,” Matthew said. “That allowed me to be passionate about what I did and drive myself.”

Matthew wanted a bow for Christmas when he was 8, perhaps because of Disney’s animated classic “Robin Hood.” It had suction cups on the end.

The next year, he wanted a real bow. He started going to competitions put on by the Springs’ Junior Olympic Archery Development group, a national youth program sponsored by USA Archery. In his first, he was third of three competitors.

“My first shot was perfect, right in the middle ... on the guy next to me’s target,” Matthew said.

The practice, coaching, gear and stakes continued to intensify. The Nofels kept giving Matthew, who attended Discovery Canyon, what he needed.

“One of the weirdest conversations I’ve ever had was when I was old enough and you explained to me that you guys were helping me along until I moved on to something else,” Matthew told his parents. “I never knew that as a kid.”

He didn’t move on — he loved it. At one point, it necessitated a family meeting.

“He said, ‘I really want to see if I can get to the Olympics,’” Kim said. “We’d seen the passion and the work ethic. So the whole family just kind of said, ‘OK, we’re all in.’”

A weeklong high-performance JOAD camp at the Olympic Training Center introduced him to high-level coaches, and he began working with Mike Perrego. More camps followed, and a spot on the National Junior Dream Team’s red team.

Nofel graduated from Discovery Canyon in 2017. As a high-ranking junior, he made his own way to a World Cup event in Antalya, Turkey, and found himself starstruck.

“To compete against everyone I ever watched on YouTube,” he said, “I was a little overwhelmed.”

But that trip showed him he was ready to age up. In his first senior event, he said he took second.

USA Archery is based in Colorado Springs, but resident athletes live in Chula Vista, Calif., for year-round practice. Matthew applied several times to be a resident athlete, and now he’s there, well-situated as he chases his Olympic dream.

Of 150 hopefuls, 16 men — including Nofel — and 16 women remain in the race for Olympic places. Currently, the U.S. has two quota spots, both earned at least in part by two-time Olympian and world champion Brady Ellison.

According to worldarchery.org, Stages 3 and 4 are scheduled for April and May 2020. “The top-eight cut will happen at stage three and final, three-archer teams selected at the fourth. Those archers will then attempt to win the full team quotas in Berlin in June. If they do not manage to upgrade the individual spots, only one man and one woman will represent the USA at Tokyo 2020.”

Basically, the Americans will battle it out among each other, then hope to battle together. Kim said Ellison is invested in making sure the U.S. has the strongest team possible.

“I don’t hear (about) a lot of competitors that share secrets with their direct competition,” Kim said. “His mentorship is just wonderful.”

Matthew has also enjoyed the support of the community he grew up in. Bill Pellegrino’s Archery Hut gave him part-time work and helped fundraise for a World Cup event. His Discovery Canyon teachers still keep close track of his accomplishments. His family handles the day-to-day.

“Everyone is just really into it,” Matthew said.

Lisa Leslie is certainly not waiting around before her induction into the U.S. Olympic & Paralympic Hall of Fame.