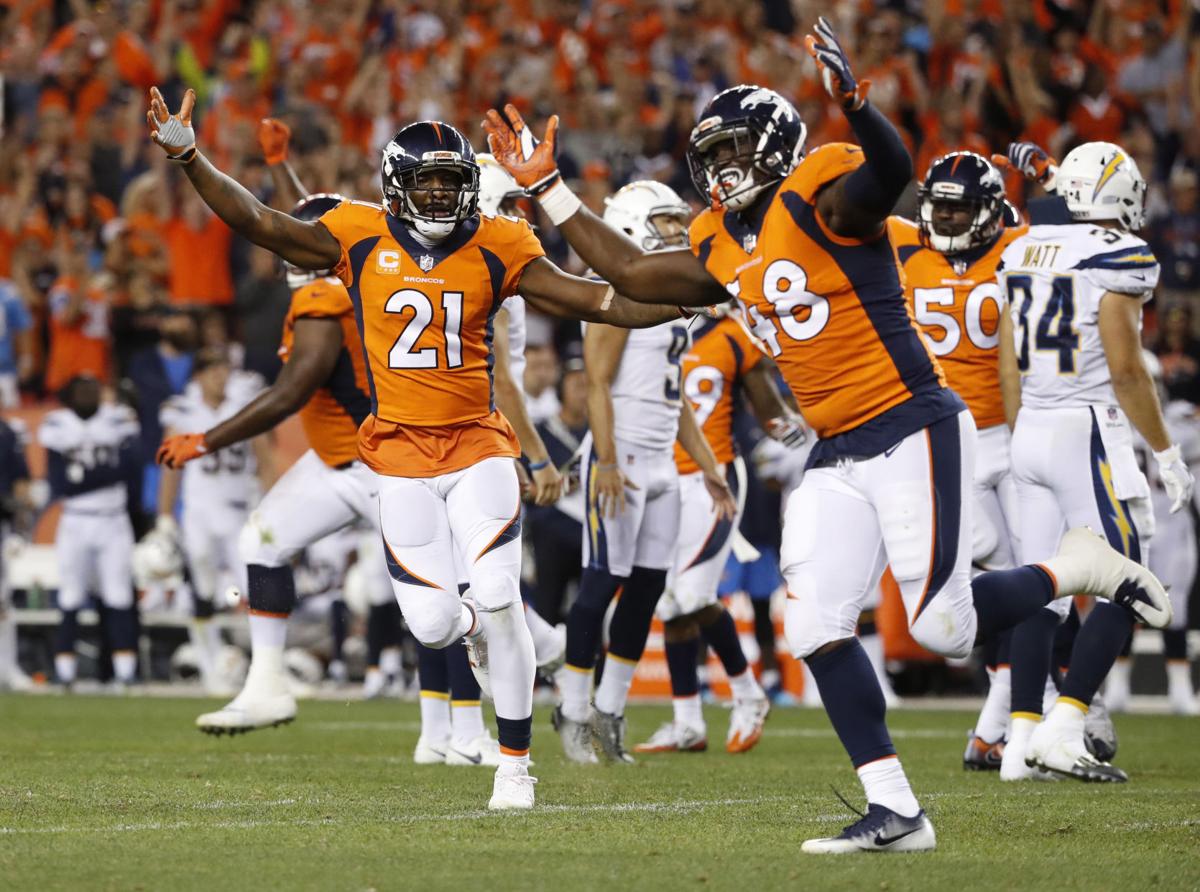 Denver Broncos outside linebacker Shaquil Barrett (48), cornerback Aqib Talib (21) and inside linebacker Zaire Anderson (50) run off the field with one second left on the clock in an NFL football game against the Los Angeles Chargers after a blocked field goal attempt, Monday, Sept. 11, 2017, in Denver. The Broncos won 24-21. (AP Photo/Jack Dempsey) 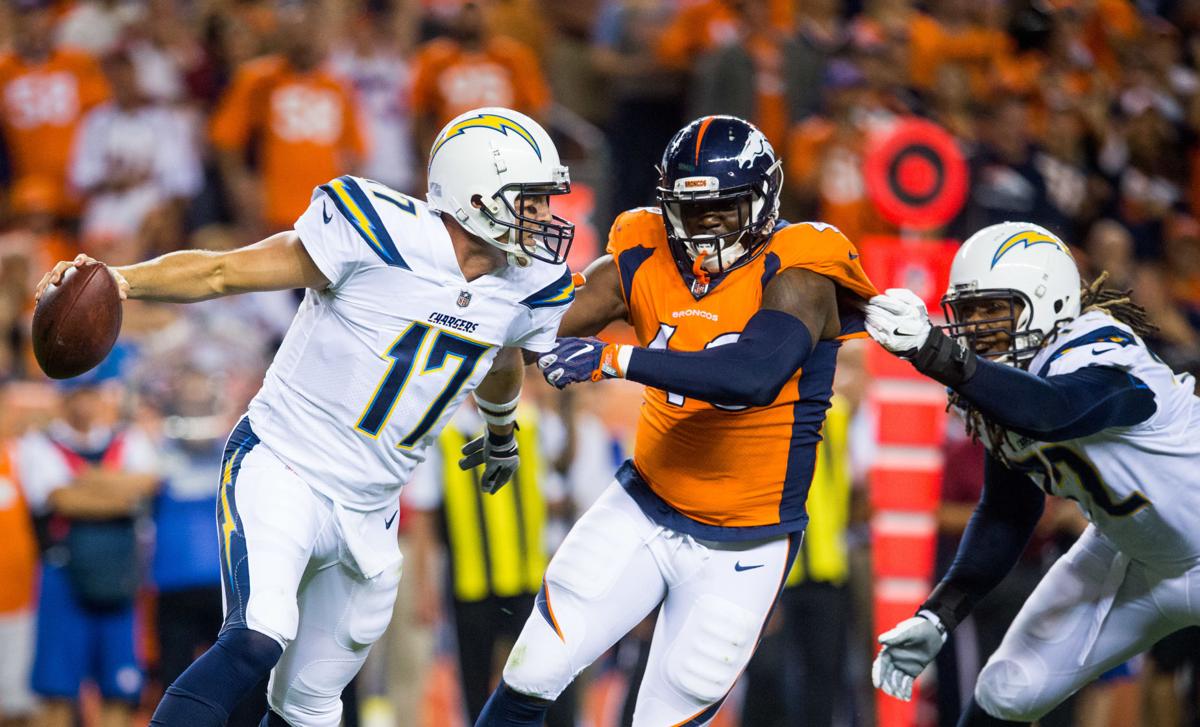 Chargers quarterback Philip Rivers, left, attempts to pull away from Broncos outside linebacker Shaquil Barrett during a Sept. 11, 2017, game in Denver.

Shaquil Barrett is no stranger to the Super Bowl.

Now with the Tampa Bay Buccaneers, Barrett helped the Broncos win Super Bowl 50 in just his second year in the NFL, backing up star pass rushers Von Miller and DeMarcus Ware. Barrett has blossomed since leaving Denver after the 2018-19 season.

In 2019, his first with the Bucs, he led the league in sacks with 19.5. And this year, he's totaled 11 sacks, three of which came in the NFC Championship game against the Packers that sent Tampa Bay to the Super Bowl

Earlier this week, Barrett credited his time in Denver as a large part of his success.

"I do have some of that same DNA in me because I learned a lot from those guys when I was in Denver," Barrett said during a Super Bowl media availability. "It helped shape me into the pass rusher I am today."

"The greatness now that we're all seeing, honestly, to me as a football player, is the most disgusting thing — to see people praise him now and jump on that bandwagon — because this man has been great for so long," said Kapri Bibbs, who played with Barrett in Denver and at CSU. "I guarantee if this man had been starting from the beginning of his career like he should have on the opposite side of Von Miller, even when DeMarcus (Ware) came, I thought he and DeMarcus should have been splitting reps — I mean, no one could stop him from getting to the quarterback in practice. No one. ... Shaq's story is one of the most eye-popping stories, for me, in the NFL."

Being overlooked is something Barrett is used to, being born and raised in Baltimore, moving to Nebraska to play high school football at Boys Town, attending Nebraska-Omaha (Division II) his freshman year and transferring to Colorado State when the football program at Omaha was eliminated.

It was in Fort Collins where Barrett really showed his potential, stating this week "that's when I started learning how to actually get off the ball."

"We knew from Day 1 he obviously had an unbelievable ability to rush the passer," former CSU coach Jim McElwain told The Gazette. "He had great quickness and instincts and, really, it showed up early in our drills. And yet, when you saw him, you didn't think he could move like that. He was a guy that whoever we played, they had to know where he was."

There was no greater example of this than the 2013 New Mexico Bowl in Barrett's senior year.

"First time I've ever seen anything like that before in my life," Bibbs said. "It was like watching Kobe take over a basketball game, but it was football and this man was playing defense. Like, are you kidding me?"

With Stafford heading to LA, what's next for Drew Lock and the Broncos' quarterback situation?

Barrett was named the defensive MVP of the bowl and was the Mountain West Defensive Player of the Year that season, with 12 sacks and 19 tackles for loss. Many around the CSU program believed he was a shoo-in to be drafted that spring.

But again, Barrett was overlooked, going undrafted largely because of his small frame at 6-foot-2, 250 pounds.

"I really was surprised someone didn't take him," McElwain said. "I kept going back to the scouts and telling them, 'the film doesn't lie.' And sure enough, when he gets to the Broncos they did a good job of the nutrition and working on his body and all of the sudden he just keeps making plays."

After signing with the Broncos as an undrafted free agent in 2014, Barrett spent nearly his entire rookie year on the practice squad, being cut twice. In 2015, he finally got his shot, starting six games and totaling 5.5 sacks despite playing behind Miller and Ware.

Over the next three seasons, from 2016 to 2018, he started nine games, but had 8.5 sacks for the Broncos. Having to split time with Shane Ray in 2017 and sit behind then-rookie Bradley Chubb in 2018, eventually caused Barrett to seek a new opportunity.

Barrett felt he had proved enough to be a starter, saying in December 2018, “I want to be a guy somewhere. I don’t want to just be a role player.” This led him to Tampa Bay, where he signed a one-year, $5 million deal and bet on himself. After leading the league in sacks in 2019, he signed the franchise tender for $15.88 million.

"It didn't really make a lot of sense to me that Denver wouldn't pay him," said Bibbs, who played for the Broncos from 2014-16 and is one of Barrett's closest friends. "Whatever that number was, I don't care. If (John) Elway and all them were honest with themselves from what they'd seen in practice and his progression over the years. ... That front office, it was a mistake. It was a big mistake, I think."

It all worked in the end for Barrett and, in some ways, the Broncos who have Chubb, who was just selected to his first Pro Bowl in his third season.

Today, Barrett seems to look back fondly on his time in Denver. And while preparing for the Super Bowl the last two weeks has spoken to Miller about the upcoming game and reflected on their time together in Super Bowl 50.

"I remember the night before or a couple nights before the Super Bowl, (Miller) just motivating our position group saying like, 'they ain't never played a team like us, it could come down to us,'" Barrett said. "He was determined to get it by any means, don't let failure be an option. And that's what I'm on right now. We've come too close to start all over next year without a ring."

So while some of Broncos Country will be cheering for the Buccaneers anyway as they face Denver's AFC West rival in the Kansas City Chiefs, maybe Barrett and his story are another reason to pull for Tampa Bay on Sunday.

Because if it weren't for the Broncos giving him a shot, and really the players who he learned from, he might not be in the position that he's in.

"I know he was frustrated at times, but he stayed poised and humbled and look how it turned out for him," Bibbs said. "He's on the verge of winning his second Super Bowl."

It is Super Bowl week, and while it is a week like never before, we still get the biggest game of the year between two of the best quarterback…