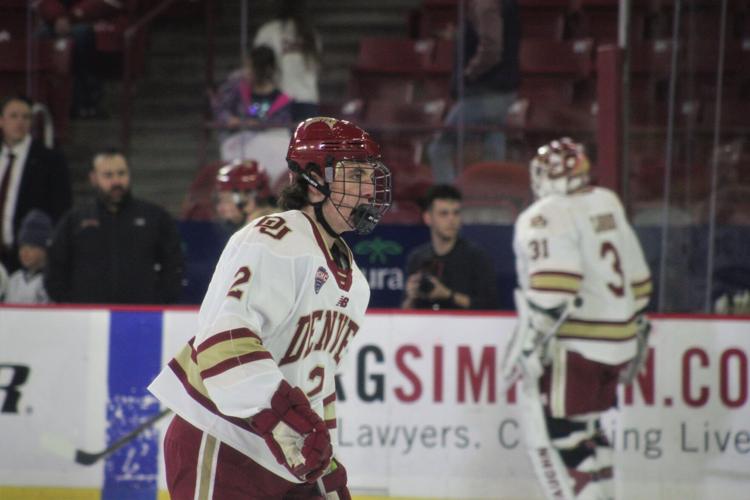 Denver sophomore defenseman Sean Behrens (2), an Avalanche draft pick, skates on the ice before a game against Miami (Ohio) on Friday, Jan. 13, 2023 at Magness Arena in Denver. 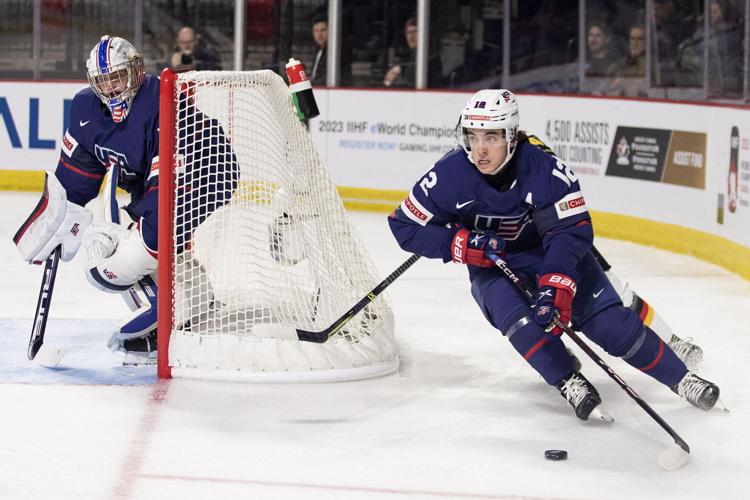 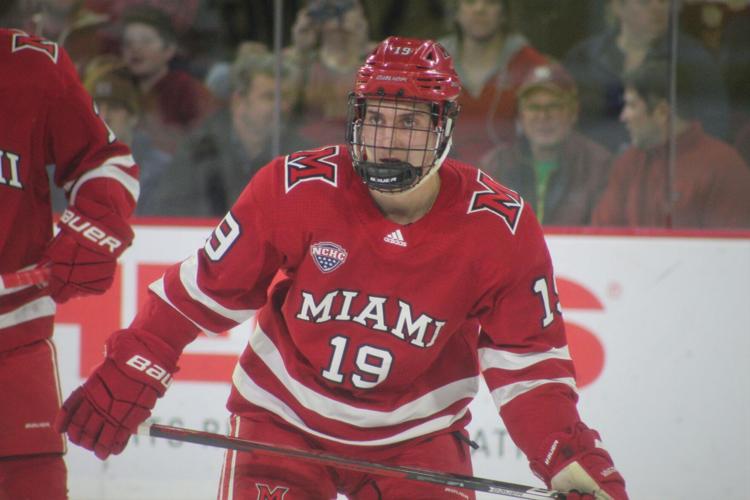 Miami sophomore forward Red Savage (19) skates on the ice during the second period of a game against Denver on Friday, Jan. 13, 2023 at Magness Arena in Denver.

Sean Behrens’ suitcase was a little heavier on the trip back from Canada than it was when he first left Denver for the World Junior Championships.

The sophomore defenseman and Avalanche draft pick helped Team USA win a bronze medal and brought back with him some good mojo that’s led to back-to-back wins since his return to the Pioneers lineup.

“I missed these guys when I was gone,” Behrens told The Denver Gazette after DU’s 7-0 win over Miami on Friday night. “World juniors is a great experience, but watching [Denver] games on TV isn’t easy. I was itching to get back. I couldn’t be happier to be back and get two good performances so far.”

It would be an understatement to say his teammates missed not just his personality, but his presence on the ice as well.

DU dropped the first game against Alaska Fairbanks last weekend in the team’s return to the ice after the three-week holiday break and it wasn’t a pretty loss. The Pioneers looked a step slower to the puck and really couldn’t generate any pressure offensively.

The next night after the 3-1 defeat, Behrens was back in the lineup and DU won by a final of 7-2. Six days later and with an NCHC opponent in town, the Pios scored another touchdown in a shutout win. Behrens had an assist to give him 10 on the season as he continues to play like one of the top defensemen in the country.

“I think he makes people around him better,” DU coach David Carle said. “When he’s on the ice, good things happen. He really enjoys defending as well. He takes pride in boxing people out and getting into people, so it drives our transitional play and our possession game.”

Behrens got the chance to play alongside top 5 NHL draft pick Luke Hughes on the top defensive line for the U.S. and tallied three points in the tournament. He also racked up plenty of ice time over the course of seven games, but Behrens has looked refreshed and ready to make a push for a second straight national championship.

Behrens wasn’t the only member of Team USA on the ice Friday night at Magness Arena as both he and Miami forward Red Savage were recognized for their efforts in winning bronze.

“I’ve played with Red for four years now [in] tournaments at the [Team USA] program,” Behrens said. “He’s one of my best friends so to be able to see him four times a year and play against him, it’s awesome.”

But once the puck dropped between DU and Miami, all of the pleasantries went away and it was Behrens’ Pios that came away with the resounding win.

This was the start of seven straight series against conference opponents to close out the regular season. It’s the toughest portion of the schedule, but Behrens and DU look up for the challenge as they chase a few more trophies in the coming months.

“I think our group is ready to make that next step and show that we’re dominant in our conference,” Behrens said. “I think we’re the top team and tonight was a big step in the right direction.”

WHAT HAPPENED: Denver (18-5-0) used a six-goal second period to roll past Miami (7-12-2) by a final of 7-0 on Friday night at Magness Arena. It was the second straight games scoring seven goals for the Pioneers and they improve to 3-0 against the RedHawks this season with a chance at the season sweep on Saturday night.

STAR OF THE NIGHT: DU’s Carter King registered his first career hat trick that gives him eight goals on the season. He’s become a key part of the Pioneers in his sophomore season after an unconventional path that led him to Denver, but he’s capitalized on his opportunity and will be a key player in the postseason as well.

BETWEEN THE PIPES: Magnus Chrona wasn’t tested much outside of a few good looks in the third period, but he did what he had to do, stopping all 20 shots for his second shutout of the season — both of which have come against Miami.

UP NEXT: The Pioneers and RedHawks conclude their season series on Saturday night in Denver. Puck drop is set for 6 p.m. and will be broadcast on Altitude 2 and 104.3 FM.

Colorado College couldn’t replicate its magic from Friday night, as the Tigers lost 4-0 to No. 3 St. Cloud State on Saturday.

Tyler King is a Denver-based sports reporter for The Gazette and covers a wide variety of topics, mainly college football and basketball.