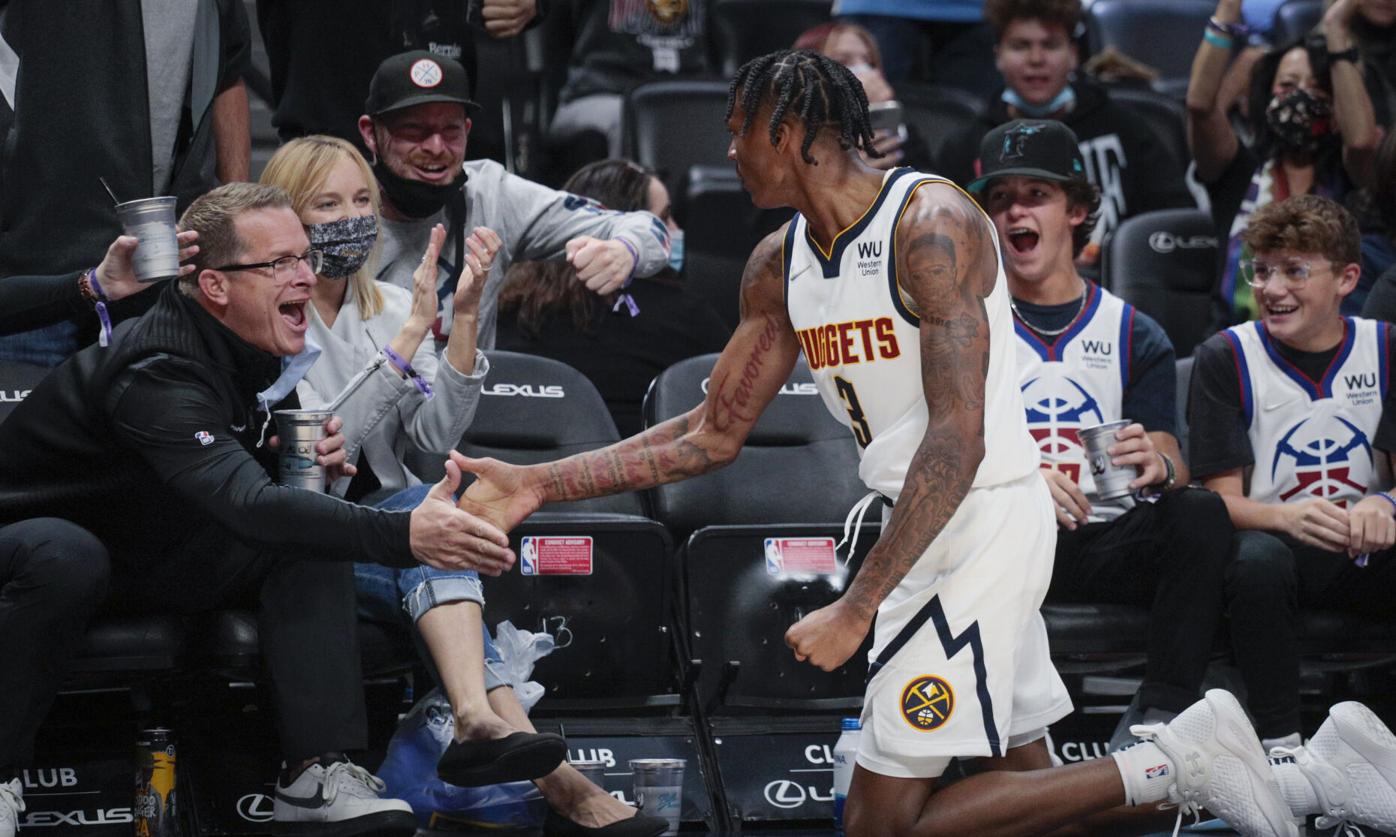 Denver Nuggets guard Nah'Shon Hyland shakes a fan's hand after Hyland made a 3-point shot against the Minnesota Timberwolves during the second half of a preseason NBA basketball game in Denver, Friday, Oct. 8, 2021. (AP Photo/Joe Mahoney) 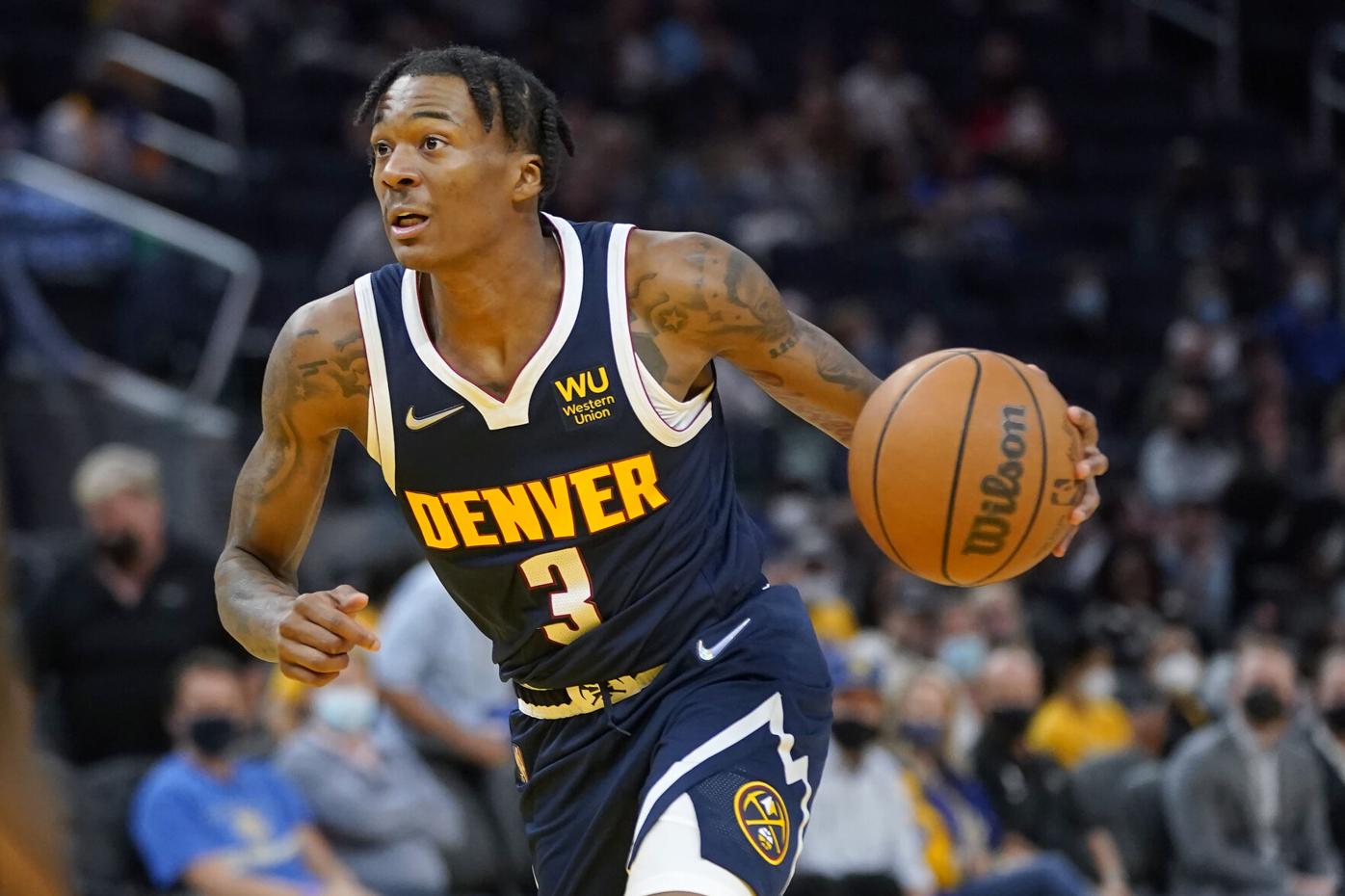 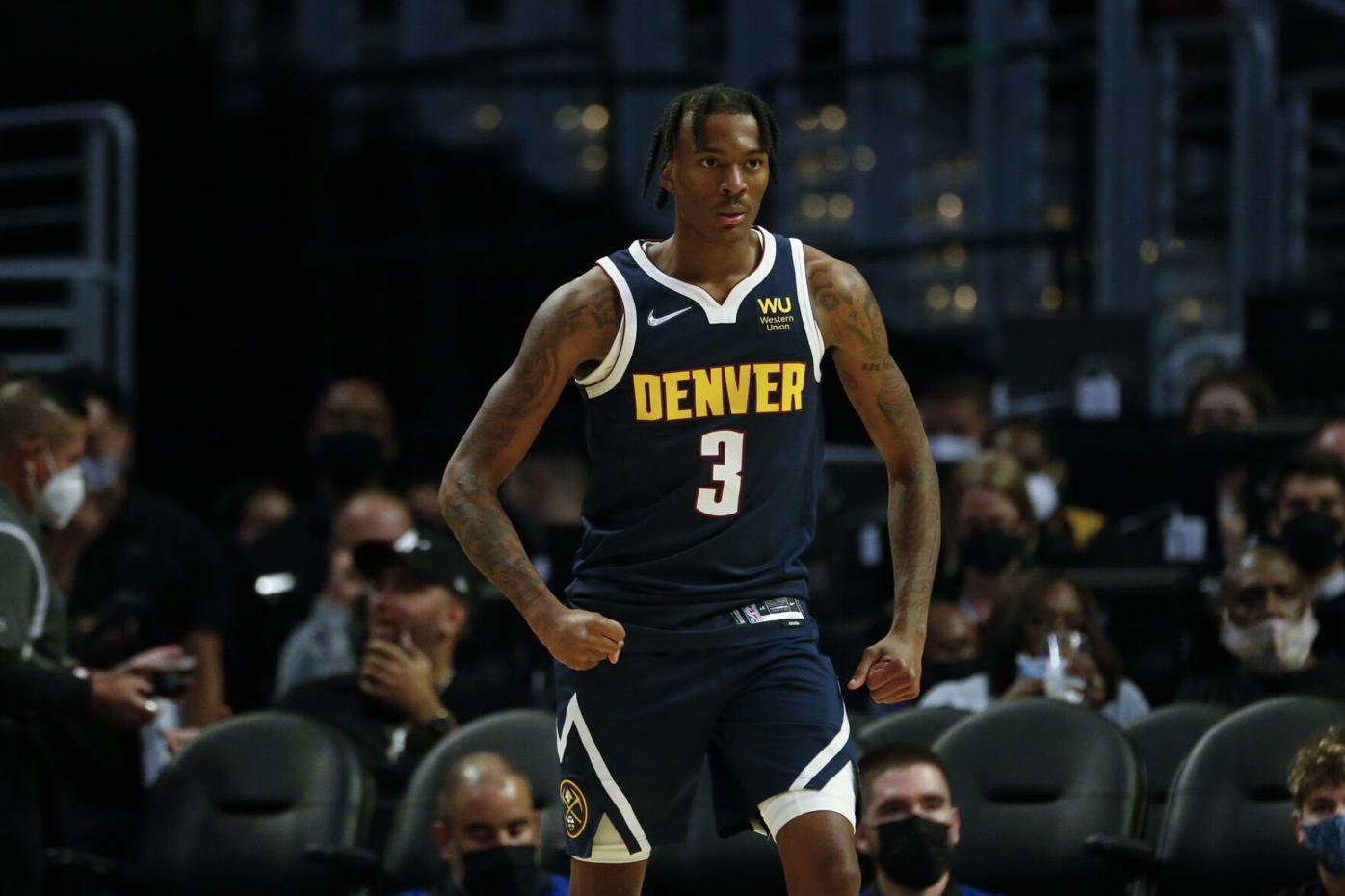 Denver Nuggets guard Nah'Shon Hyland shakes a fan's hand after Hyland made a 3-point shot against the Minnesota Timberwolves during the second half of a preseason NBA basketball game in Denver, Friday, Oct. 8, 2021. (AP Photo/Joe Mahoney)

The jumper and joy of Nah’Shon ‘Bones’ Hyland are both genuine.

That’s the message from the two previous coaches of the Denver Nuggets rookie and a sentiment his new coach, Michael Malone, seems to appreciate.

“I’ll be honest. We drafted him 26th in the draft. At that time, back on draft night, I didn’t have great expectations, you know, for Bones Hyland. Coming to a team that has won at the level that we’ve won at, you know, it’s hard for young kids to kind of crack that rotation,” Malone admitted before the Nuggets’ fourth preseason game. “But then you watch him in Summer League, you watch him in our gym all summer into September and then you watch him through training camp and the first three preseason games, the kid’s going to be on the court. It’s impossible to keep Bones Hyland off the court. He’s just talented, plays with great pace. He gets to places on the floor that a lot of guys can’t get to, and he’s got big balls. The guy is not afraid for a young kid. He goes out there and cherishes every opportunity. We have a deep and talented roster, but I think Bones has earned the right to play.”

Rod Griffin, Hyland’s coach at St. Georges Technical High School in Middletown, Del., remembers thinking that a lanky, skinny and feisty eighth-grade point guard playing at a local AAU tournament was pretty good. A couple of years later, fans packed gyms to watch Hyland play for Griffin with the moxie he’s maintained into the start of his NBA career. After hitting a 3-pointer – one of his six in the game - and drawing a foul in a preseason matchup against Minnesota, Hyland got up and high-fived some front-row fans before hitting his free throw.

“Always,” Griffin said of Hyland’s on-court demeanor. “It’s no different than when he first arrived at St. Georges High School. He’s always been engaged with fans. The thing with Bones I tell people, Bones puts cheeks in the seats.”

The trend continued at Virginia Commonwealth University. Hyland was only a Ram for two seasons, long enough to win over the VCU faithful who wore custom Bones t-shirts and brought little skeletons to games, according to coach Mike Rhoades. The coach added Hyland’s mother is the only one allowed to call him Nah’Shon.

“He loves the spotlight. He’s not afraid of the moment. He brings great joy to the court that I think his teammates will love. It’s not fake,” Rhoades said in the weeks after the draft. “When he daps you up, it’s real. When he gives you a hug, it’s real. When he fires up a teammate, when he brings the juice for a teammate, it’s from the heart. That kid wears his heart on his sleeve, and this stuff you see around the draft, this is him for real. It’s not a show.”

His new teammates are starting to realize as much.

“He’s not one of those guys that comes in one day with a whole bunch of energy, comes in another day and he’s down,” Nuggets guard PJ Dozier said during the preseason. “Nah, he’s going to bring it every day on and off the court.”

On the court, Hyland remains a slender, skilled and feisty guard with room to grow. Rhoades said Hyland took a big step forward in the weight room as a sophomore at VCU, which helped Hyland finish around the basket better and boosted his draft stock. Malone wasn’t thrilled with Hyland’s six turnovers in the preseason game against Minnesota, the same night Hyland admitted to not being aware of the time and score in the final seconds of regulation in an eventual overtime loss, but those were blips in an otherwise strong preseason. In five preseason games, Hyland scored more than any other rookie in the NBA.

“I feel as though I’m just scratching the surface,” Hyland said after his preseason debut. “My ceiling is so high. You know, you see the stars in the league now. I know I can reach that potential.”

Rhoades vouched for Hyland’s work ethic. The VCU coach said Hyland’s 3-point shooting range is a testament to that. While Hyland, like most freshmen student-athletes Rhoades has encountered, had to adjust to increased demands from high school to college, everything was fine once he got Hyland on the court.

“In my 25 years, I’ve coached a couple of other guys that played in the NBA that were great workers,” Rhoades said. “When it comes to Bones working on his shot and shooting the basketball, shooting it with pace and at game speed, he might be the best I’ve ever coached at that. He loves to be in the gym.”

The preps-to-college transition had to be easier than what Hyland went through in the spring of his junior year of high school. On March 25, 2018, Hyland jumped from a second-story window of his family’s Wilmington, Del. home to escape a house fire that killed his 11-month-old brother and grandmother. He honors them with a tattoo on his left bicep. A tragedy that could have altered his outlook only reinforced it, according to his high school coach.

“He was always a very positive and upbeat guy,” Griffin said. “I think the fire only enhanced his demeanor.”

Hyland recovered from knee injuries sustained in the fall and returned to the court for his senior season at St. Georges. A year later when he returned to the region for a game at La Salle, members of the Wilmington Fire Department made the trip to the game. Griffin said Hyland recognized the people who came to his aid, sprinted up the stands and embraced them.

“He loves people,” Rhoades said. “It’s very important to him that he makes people around him feel better and feel good. You’ll get that feel from him very quickly. … He has a joyous vibe, for sure.”

As a sophomore in college, Hyland won Atlantic 10 Player of the Year. Then, he decided it was time to chase his dream. something that was in part realized in the Nuggets’ preseason opener against the Los Angeles Clippers.

“When I first stepped out there, it was nothing but smiles just to see how far I made it through everything that I’ve been through in my life,” Hyland said. “Finally stepping on the NBA court with NBA players, it was just like a dream-come-true moment for me. I was just out there, having fun, honestly.”

Another rush of joy could be on hand Wednesday when Hyland will likely get a chance to make his regular-season debut against the Phoenix Suns.

While his game has been compared to the likes of Jamal Crawford and Lou Williams, other high-scoring, hot-shooting guards who are also capable playmakers, the constant joy might make the Nuggets’ rookie a bit different. That’s how he seems to like it.

“I don’t really compare myself to nobody. I don’t like to mold myself, my game, after nobody as well. I feel as though I’m very unique in my own way,” Hyland said on draft night.

“I’m not like no other. I’m just Bones Hyland.”