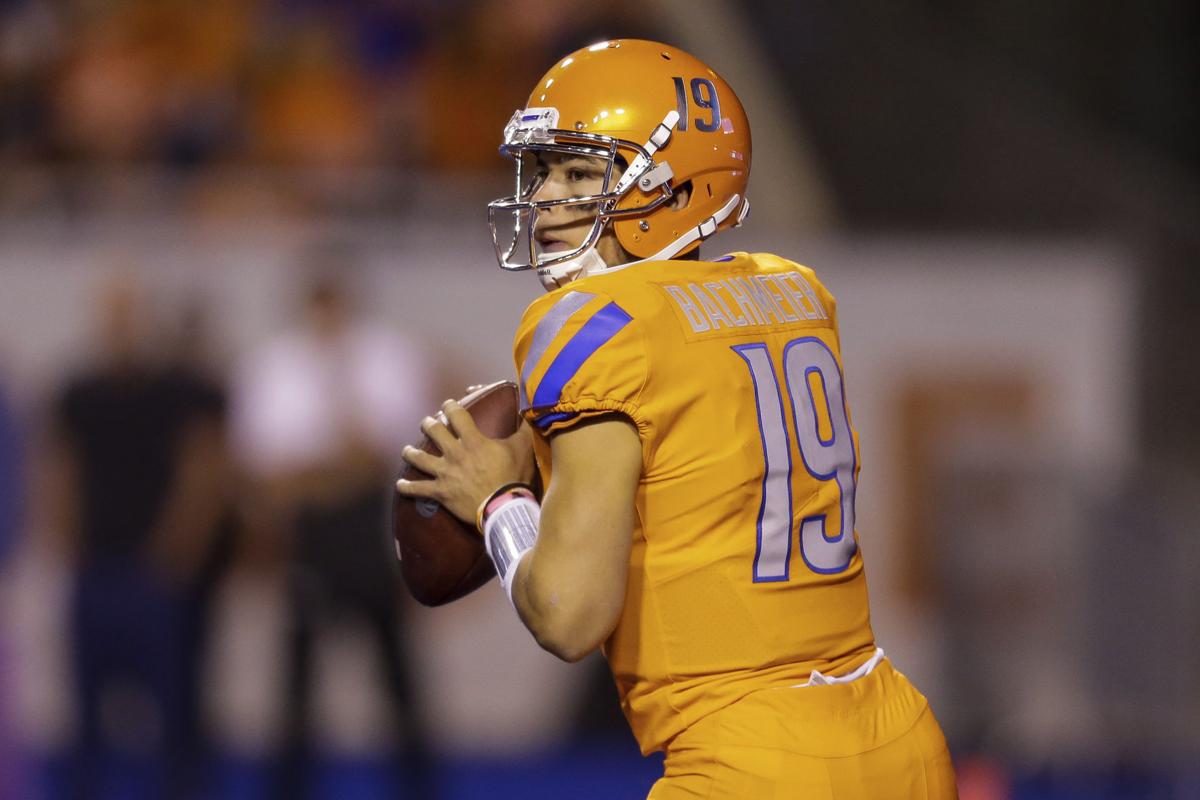 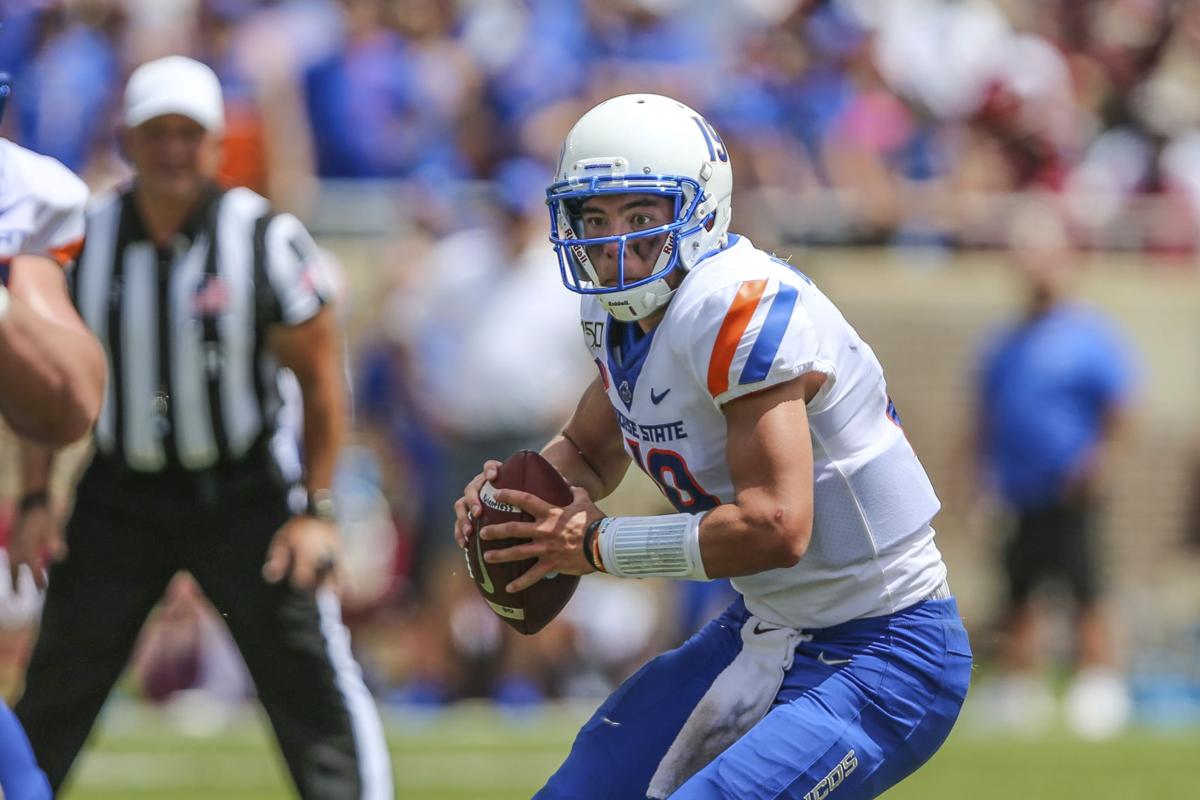 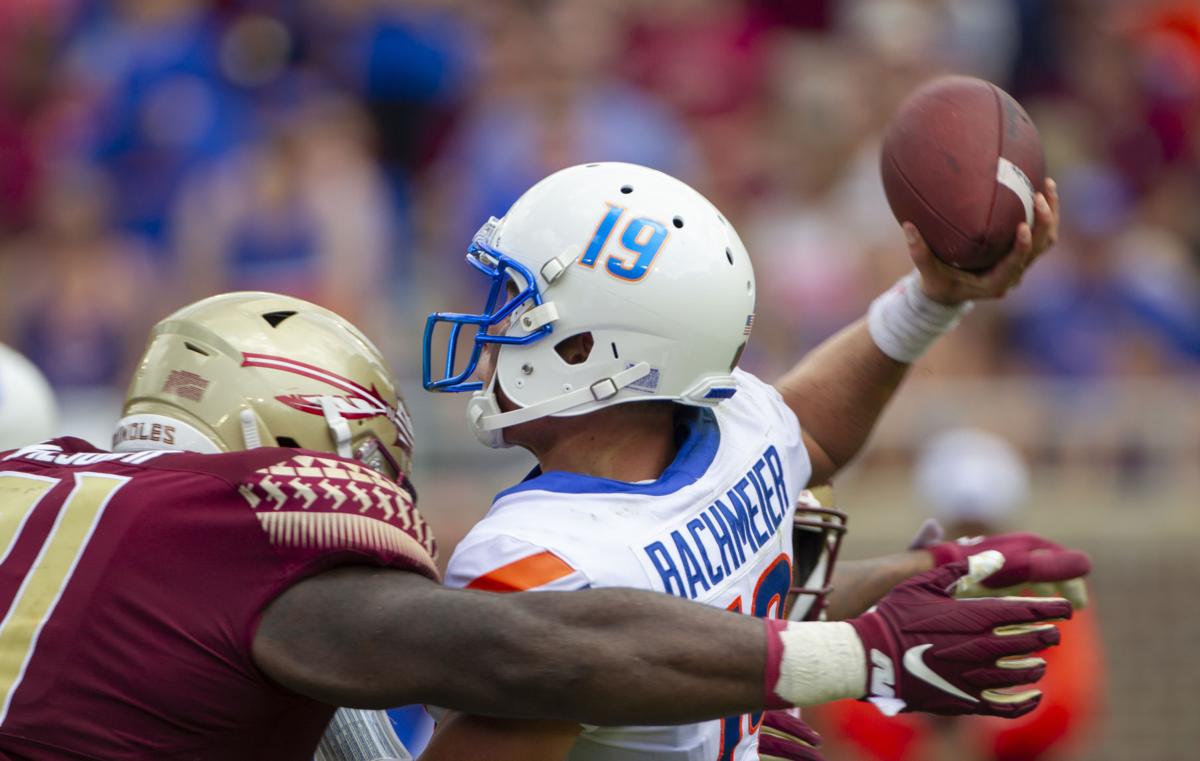 Florida State is called for roughing the passer on a hit to Boise State quarterback Hank Bachmeier (19) in the 1st half of an NCAA college football game against Boise State in Tallahassee, Fla., Saturday, Aug. 31, 2019. (AP Photo/Mark Wallheiser) 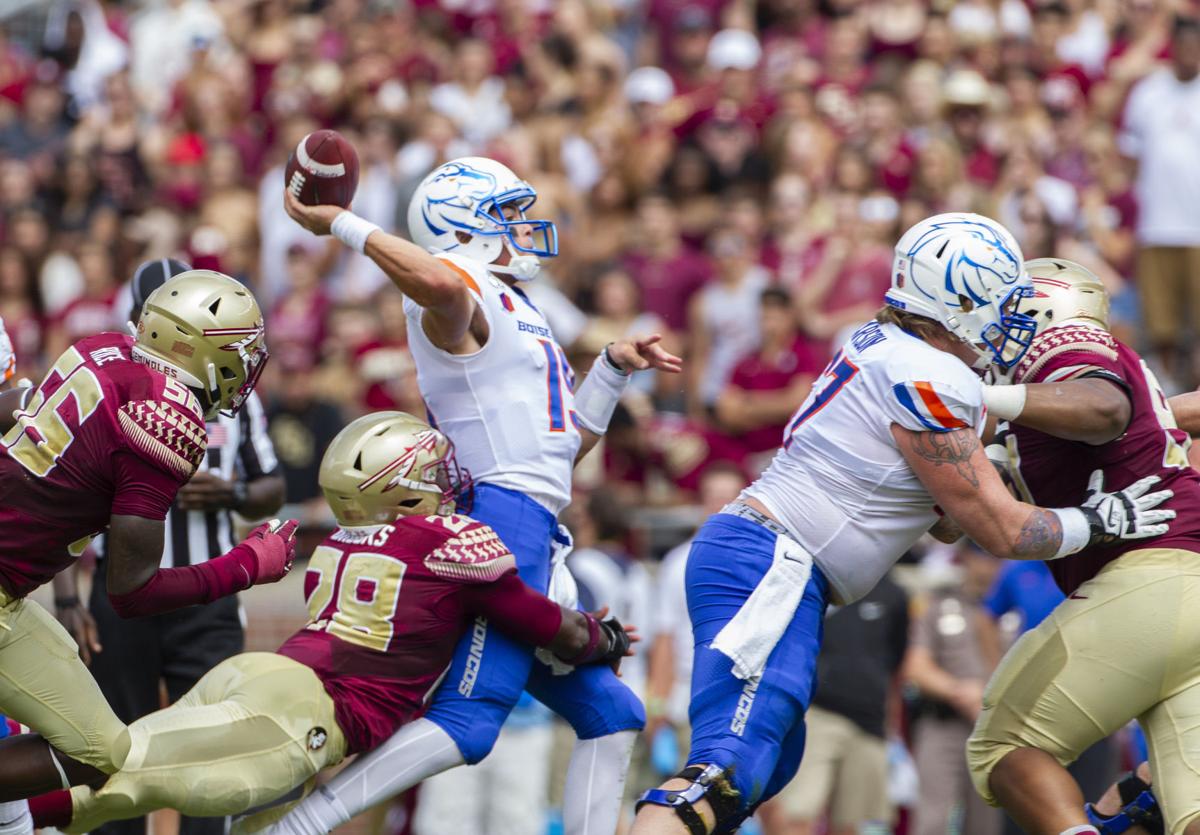 Boise State Broncos quarterback Hank Bachmeier (19) throws as he's being dragged down in the 1st half of an NCAA college football game against Florida State in Tallahassee, Fla., Saturday, Aug. 31, 2019. (AP Photo/Mark Wallheiser) 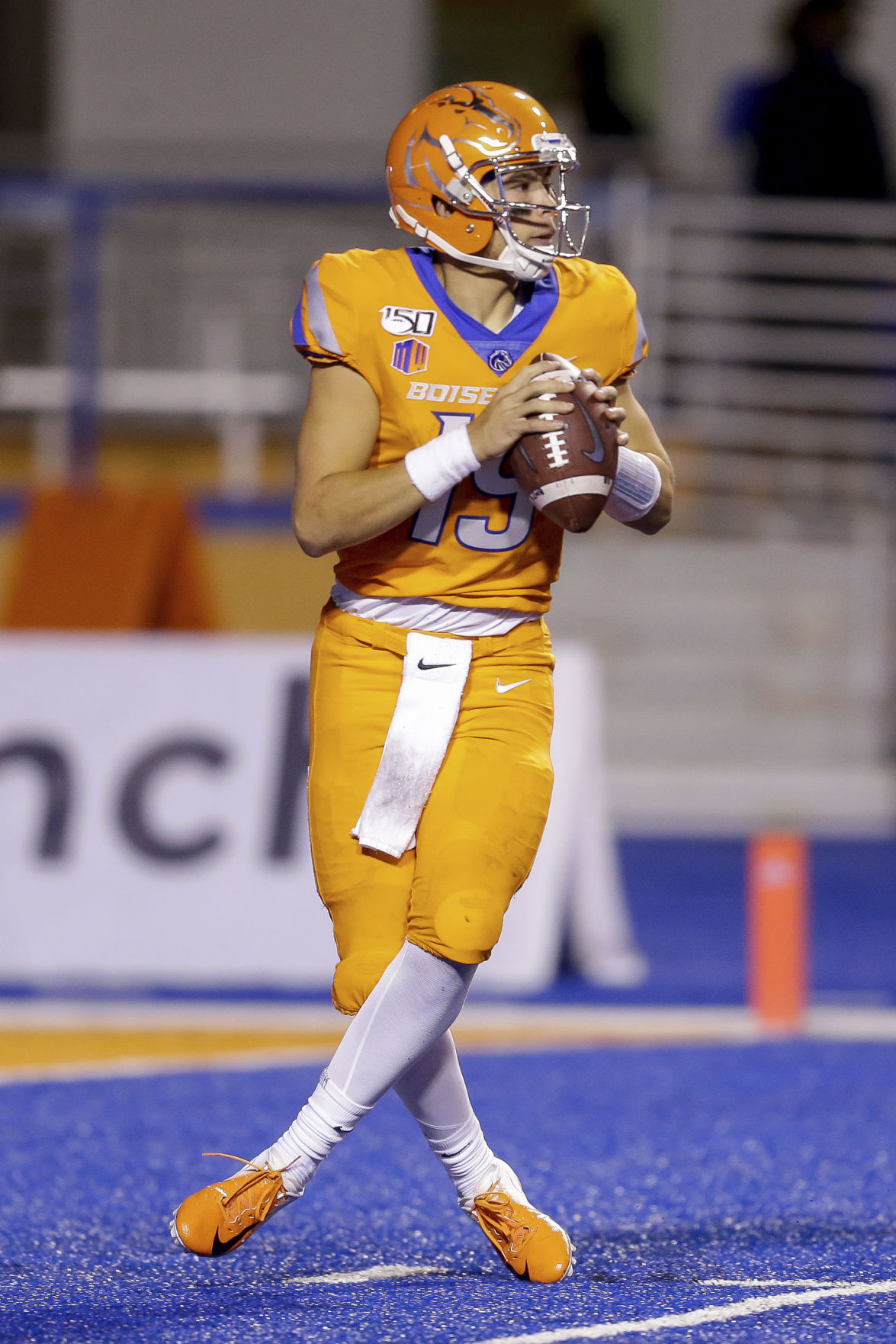 Florida State is called for roughing the passer on a hit to Boise State quarterback Hank Bachmeier (19) in the 1st half of an NCAA college football game against Boise State in Tallahassee, Fla., Saturday, Aug. 31, 2019. (AP Photo/Mark Wallheiser)

Boise State Broncos quarterback Hank Bachmeier (19) throws as he's being dragged down in the 1st half of an NCAA college football game against Florida State in Tallahassee, Fla., Saturday, Aug. 31, 2019. (AP Photo/Mark Wallheiser)

As Boise State’s quarterbacks have gone, so too have its matchups with Air Force.

That’s a prospect that should sound enticing to the Falcons, considering the lack of experience the No. 20 Broncos have at the position.

Freshman Hank Bachmeier is starting at quarterback for Boise State, a role he’s had for three games. He’s done plenty to justify the team’s faith him in — 407 passing yards at Florida State, for instance — but has also thrown three interceptions and taken 10 sacks.

Behind him are backups with a combined 20 career passing attempts.

“There’s so much that goes in when you put a game plan together, it’s not only the age of a quarterback,” Air Force coach Troy Calhoun said. “Not that that’s not a factor, because it’s certainly a variable we’re going to consider.”

The lack of experience was to be expected in the wake of four-year starter Brett Rypien’s jump to the NFL’s Broncos. He’s on Denver’s practice squad.

Rypien’s worst two games in college came during his freshman and sophomore seasons at the tail end of Boise State’s three-year losing streak to Air Force.

The Falcons blitzed from everywhere and took away short routes, daring the Broncos to complete low-percentage deep passes but then limiting their time to do so. Rypien completed just 32 of 74 passes in those two matchups while taking six sacks.

It would seem Air Force is well-positioned to do the same this year, given the experience and talent in the secondary that should allow the front seven to look for creative ways to rattle Bachmeier.

“Having the defense back that we do and the trust in our coaches, when we’re lined up and told to make a play we trust everyone is going to make that play regardless of who it is and what stage of the game,” fifth-year senior safety Garrett Kauppila said. “So we’re confident in that.”

But Kauppila added that Backmeier’s inexperience doesn’t necessarily make him easier to exploit.

“I don’t think age is a factor,” Kauppila said. “He’s obviously the chosen quarterback for a talented program, so I don’t think you think of him as a certain age. He’s courageous. He stands in the pocket. He faces pressure well and steps into throws in the face of pressure and hasn’t seemed to be fazed by that. So obviously we’re going to do our best to give him our best shot and new looks, but definitely nothing specific due to age.”

The importance of Boise State’s quarterback play in this series can’t be overstated. In the Broncos’ four victories in the seven meetings since the series began in 2012, the Broncos have completed 75 percent of their passes for an average of 333 yards and three touchdowns.

In Air Force’s three wins, Boise State quarterbacks have completed 47 percent of their passes with four interceptions and eight sacks.

“We’ve got to get our quarterback trained to play the way he needs to play and do what he’s supposed to do,” Broncos coach Bryan Harsin said.

“And then the rest of guys around him (need to) make plays, too.”

Boise State definitely hasn’t shied away from passing as it has broken in Bachmeier. In two games against Football Bowl Subdivision teams (Florida State and Marshall) the Broncos have passed 85 times while running 94 times.

So the ball will be in the air, for better or worse.

“We’re going to practice just like we always do, just like we did for (CU’s Steven) Montez,” safety Jeremy Fejedelem said. “We’re prepared to have a very talented quarterback face us this week.”

Paul Klee: From politics to football, Air Force beats CU Buffs in a win for the ages

Denver native Ben Waters breaks out for Air Force football at the perfect time, against CU